To go under the radar after a £66.8million move to Liverpool is unheard of yet Alisson Becker has, somehow, managed just that.

For a little over three weeks, he was the most expensive goalkeeper in the world having swapped the Stadio Olimpico for Anfield at the end of July. Chelsea then parted with north of £70million to sign Kepa Arrizabalaga and with it whatever weight the price tag may have put on Alisson's shoulders was lifted.

However, the pressure was firmly back on him just a few weeks into the new campaign.

A dink over the top of Anthony Knockaert drew attention to his style of play. It resulted in pundits querying whether he was showboating or doing it out of necessity. The “boot the ball into row z” posse had their knives sharpened as they anticipated his first mistake.

They didn't have to wait too long. His failed Cruyff turn against Leicester City resulted in Liverpool conceding their first goal of the season. Yes, he should have cleared but the Brazilian is not that type of player and the Reds probably wouldn't have signed him if he was.

Context, as ever, is also king. Kelechi Iheanacho's push on him could have easily been given as a foul. Pundits ignored that as well as the fact he reacted quickly and almost kept out Rachid Ghezzal's effort.

The latter highlights his mentality. He doesn't dwell or let mistakes impact him like so many others do.

The 26-year-old was now under the microscope. A place so many keepers have been during their debut seasons in England. David de Gea struggled under it for quite some time while Loris Karius never really had a chance all things considered.

Yet the Liverpool No.13 just brushed it off and got on with his job. The incident against the Foxes came in game-week four. Alisson has played eight matches since then for Liverpool and he's repeated that mistake a grand total of zero times.

There's an argument to suggest that he's perhaps tweaked his game and that he's no longer as much of a risk taker. But he still takes his time on the ball, he still looks to play out from the back and he's still very much a sweeper keeper.

His consistency meant the intense media scrutiny didn't last long. They got bored and started to look elsewhere. It's because of this that the general consensus from those not invested in Liverpool is that he's been unremarkable.

But that couldn't be further from the truth. Everything about Alisson's season so far has been extraordinary.

Granted, there have been few saves worthy of highlight reels and the Liverpool defence – more so Joe Gomez and Virgil van Dijk – have been one of the best in the Premier League this term meaning he's hardly been called upon.

Alisson's impact on the defence

Jürgen Klopp's men, along with Manchester City, have the meanest defensive record in England this term.

Both sides have been breached on just three occasions but it's only when looking at the Post-shot xG (expected goals) numbers that you can gauge how solid a team is.

For those unfamiliar, Post-shot xG gives a value to where a shot was taken from and where on the target it went. The more in the corner the effort is, the higher the value.

Liverpool's Post-shot xG conceded total for the season so far is 5.97, 2.01 higher than City's meaning the reigning champions aren't giving up many high-quality chances.

Klopp's defence is still impressive but the team are overperforming their defensive expected goals number by almost double. And it's down to Alisson.

He did the same with Roma last season. In fact, his numbers are even more impressive this time around. The simplest way to show this is by using Post-shot xG ratio. That stat shows how many actual goals have been conceded for every one expected goal against.

While in Rome, the Brazilian shot-stopper had a Post-shot xG ratio of 0.62. For Liverpool that number has dropped to 0.54. Essentially, he concedes one goal for every two expected goals.

No goalkeeper in the Premier League can better that. For further context, Jan Oblak and Marc-Andre ter Stegen, two at the very top of their game right now, are coming in at 0.68 and 0.94 respectively. 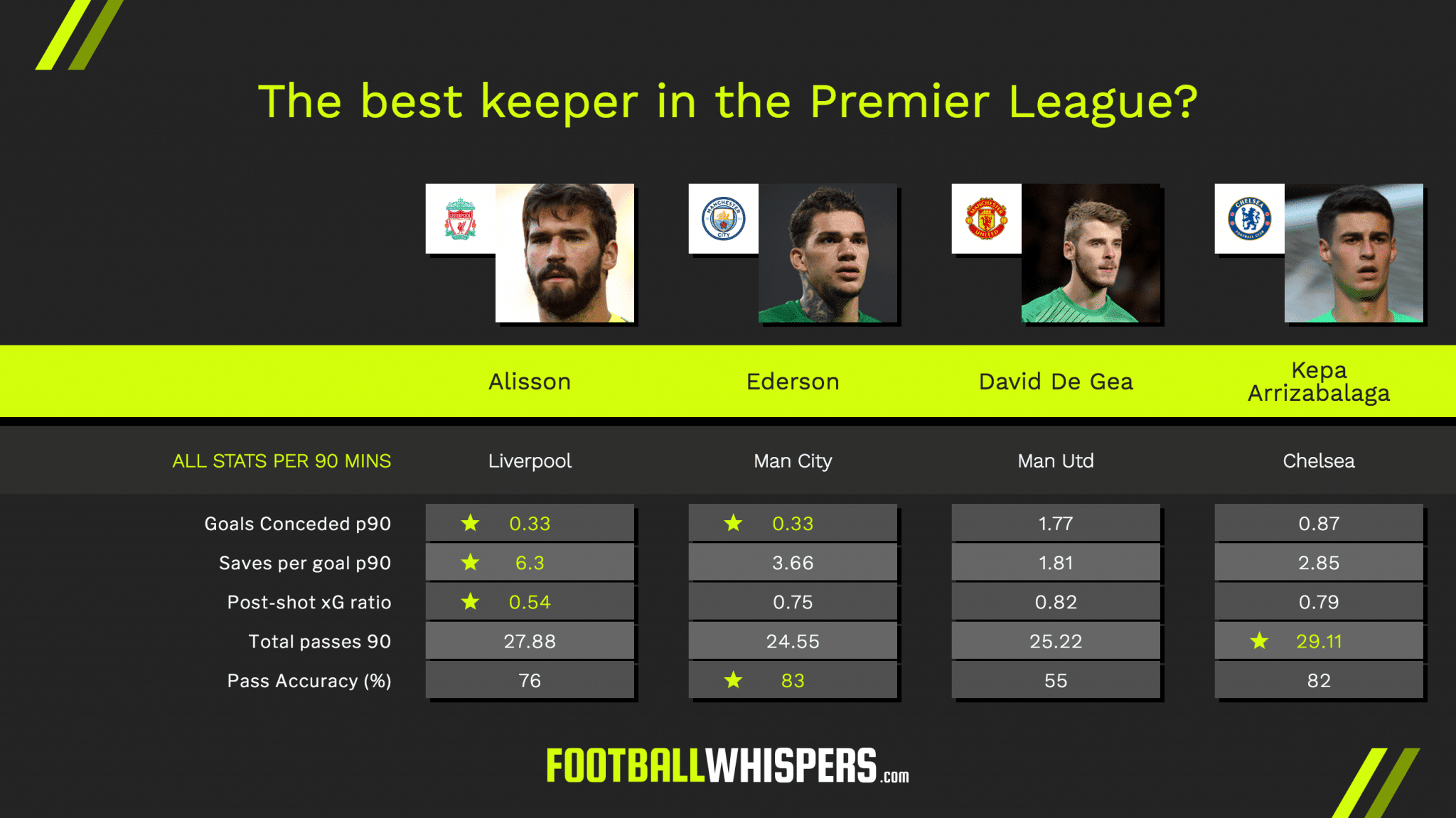 Alisson is making big saves. He's making a big difference. And he's one of the reasons the Reds find themselves keeping pace with City at the summit.

For added context, the Post-shot xG against per 90 stat has Liverpool conceding 0.66, City on 0.44, Manchester United on 1.97 and Chelsea on 1.01. All four are overperforming but none more so than Alisson.

Furthermore, he's making 6.3 saves per goal, a clear standout when compared to Ederson, de Gea and Kepa. Alisson's contribution going forward has been just as impressive.

Alisson's impact on the attack

As highlighted in the video below, Alisson's ability to pick a pass relieves pressure on the Liverpool defence and nullifies the opposition's press.

Huddersfield Town tried it at the weekend and it resulted in the Reds having countless three versus three opportunities in their attacking third.

His 76 per cent pass success rate is even more impressive when the type of passes he's attempting are taken into account.

An explanation into how Alisson's distribution exploited the spaces left in Huddersfield's midfield: https://t.co/uc4oJXnUDL

On the day, Klopp's men failed to make the most of these opportunities. But that should take nothing about from the part Alisson played in bypassing the press and getting the forward players onto the ball.

The same thing happened against Southampton, too. 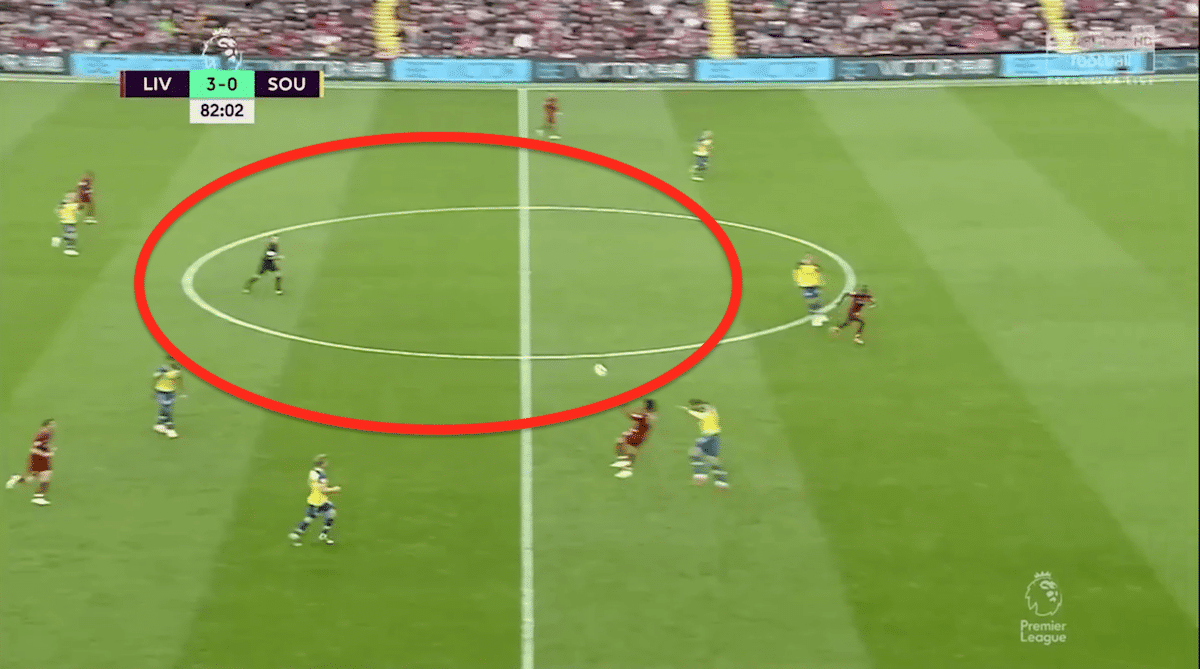 The game is as good as over at 3-0 but the away side are still pressing forward as they look to spark a revival. Mark Hughes' men are three against three with their entire half to defend having committed bodies forward.

Alisson picks out Salah who unfortunately can't bring it down and continue the attack.

But, as shown in the above still, the space the goalkeeper's ability on the ball creates is something that can be exploited, time and time again.

Not all teams will look to press Liverpool but it will happen from time to time. Why? Because it would be negligent, bordering on foolish, to allow the Reds, with their array of talent going forward, to dictate the tempo and dominate the ball unless there is full confidence in the defensive set-up.

But having the former Roma man between the sticks gives the Reds that option to play long in a measured and composed manner. It gives Klopp's team something of a plan B. Karius could pick a pass but his weren't as incisive or as purposeful as Alisson's. He adds another dimension to this Liverpool team.

The same thing happened with van Dijk. The fee Liverpool paid for the Dutchman is rarely mentioned because of how colossal he's been since the switch.

But it's even more impressive with Alisson. He's come to a team in a new league and he's not just living up to the price tag, he's making it look like a bargain.

The £66million summer signing is the best in the Premier League right now and so consistent that it barely gets a mention. If this form becomes the norm for him in England teams will be looking for their very own Alissons, and not their very own de Geas, sooner rather than later.