Steven Gerrard and Rangers have a big decision to make this summer. Do they keep Alfredo Morelos, a player with over 30 goals in the Scottish top flight over the past two seasons, in a bid to pry the Scottish Premiership away from rivals Celtic, or do they cash in on the unreliable, hotheaded forward?

Morelos picked up his fifth red card of the season on Sunday as Rangers fell 13 points behind their Glasgow neighbours after defeat in the derby.

It may have been a big ask for Gerrard’s side to claw back a ten-point difference in the final seven games of the season but a win at Parkhead would have made the remainder of the campaign interesting.

However, just four minutes after falling behind to Odsonne Édouard’s strike, Rangers found themselves down to ten-men after Morelos lashed out and elbowed Celtic skipper Scott Brown.

Gerrard was quick to make his feelings on the situation known after the game: “Obviously he’s been provoked in the first place but it’s happened on too many occasions now and I’ve gone above and beyond… I’ve backed Alfredo more than enough and I can’t defend him anymore. He’ll be punished internally for it and we’ll move forward.”

But can Morelos really move forward while he’s still in Scotland? He has a reputation. His card is marked. Just as Brown did on Sunday, opposition players will always be eager antagonise the Colombian.

And can Rangers bank on the striker? They need goals to compete at the top with Celtic, but what use is a goalscorer if he’s suspended for close to a quarter of a season?

Furthermore, in the case of the Gers, £20million in the bank might be better for their long-term ambitions. Especially when you consider the fact they unearthed Morelos in the Finnish league and signed him for just £1million. 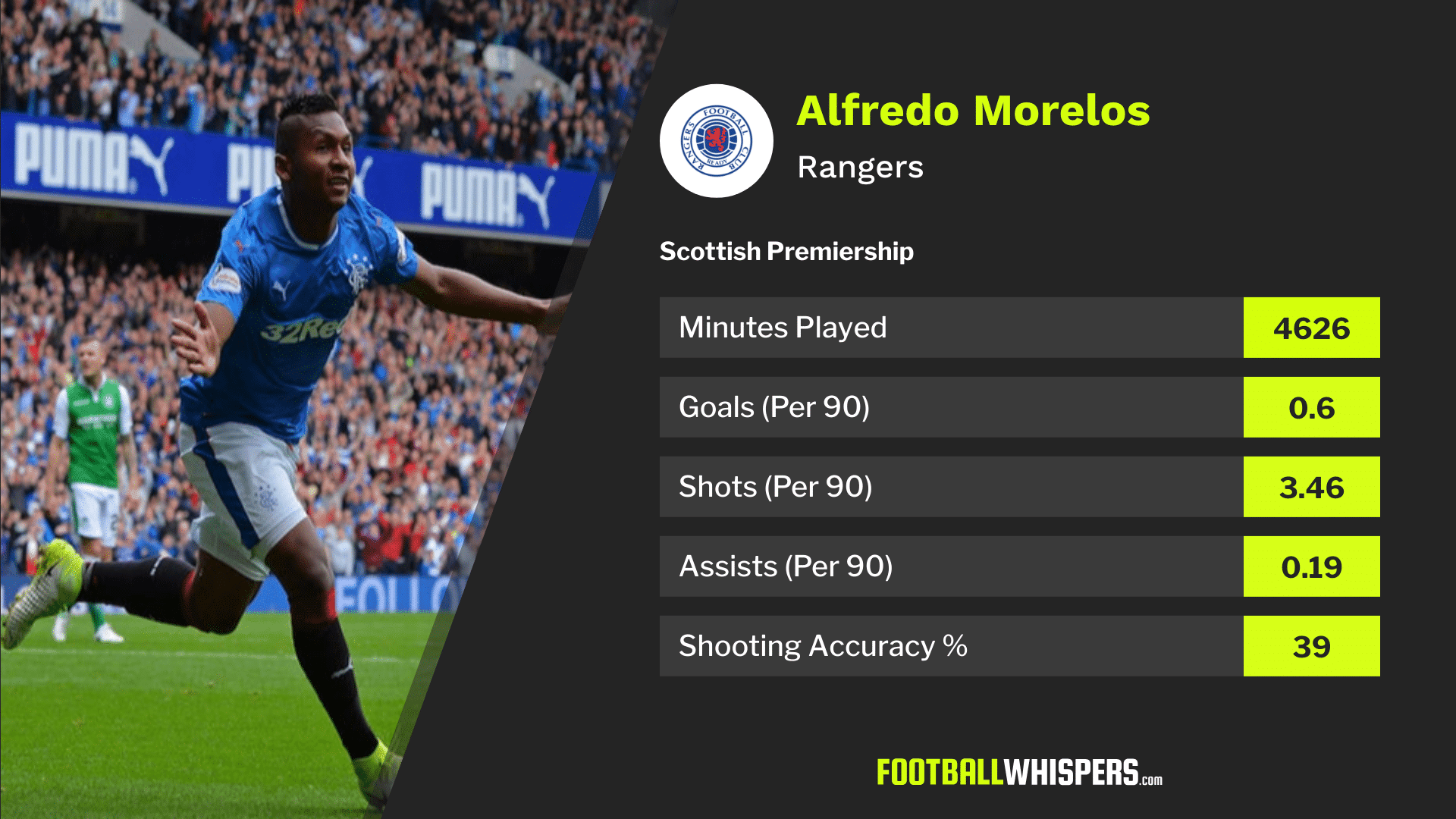 It’s a whole different ball game in the Premier League. Even for mid-table clubs, £20million isn’t a large fee these days, not when it’s being used to sign a reliable goalscorer.

Leicester City are believed to be interested with Brendan Rodgers looking to return to Scotland during a summer raid. Everton are in need of a forward with it becoming increasingly clear that Richarlison suits Marco Silva’s system out wide while the majority of the top six in the Premier League could all find space in their squad for a player like Morelos.

The Rangers No.20, for all his faults, knows how to put the ball into the back of the net. While he may struggle to replicate the prolific form he’s shown in the Scottish Premiership, if there’s a supply line to him then he will polish off those chances. Of the 31 goals he’s scored since the start of the 2017/18 season, 30 arrived inside the penalty area.

At 22 years old there’s still plenty of time for him to develop as a player. He already has the work rate needed to succeed in the English top flight. Though small in size, he isn’t bullied. He also links play well, averaging five assists per season since the move to Rangers.

He's far from the finished article but he doesn't have to be. A change of scenery may help Morelos get back onto the right track. It worked for Luis Suárez after the Uruguayan joined Barcelona.

The former Liverpool man is a player Morelos has been compared to, with Gerrard acknowledging some similarities between the two. ”

“There are a lot of similarities in behaviour,” he said. “They both play on the edge. They want to win, be it training or games, they can both finish, they score big goals, they're relentless in the way they play.

“So yeah there's similarities but Alfredo is a young lad who's still learning and growing so I think it's a bit unfair to compare him to Suárez.”

A bullish forward with an average of 0.6 goals per 90 over a sample size of 4,626 minutes. Those numbers, coupled with his tenacity and determination, should be enough to tempt a Premier League club into taking a gamble on him.

Yes, it's high risk but there's also a high reward if he gets it right.