In what was an incredibly busy summer transfer window for Rangers, the signing of Alfredo Morelos was an anomaly.

The Scottish giants spent primarily on players that then manager Pedro Caixinha previously knew intimately from past jobs. They brought in Carlos Peña and Eduardo Herrera from Mexico, as well as Portuguese talent in Bruno Alves, Daniel Candeias and Fábio Cardoso.

Along with them came two major domestic additions in Graham Dorrans and Ryan Jack.

The only permanent signature not to call Mexico, Portugal or Scotland home was Morelos, a Colombian who had made his name in the Finnish league with HJK Helsinki.

The striker also represented a departure from the usual transfer policy in that, at 21 years old, he was significantly younger than his fellow new arrivals, who collectively had an average age of 28.1.

Any trepidation surrounding the youngster’s signing was perhaps justified, therefore. Unlike the others who had made the move to Rangers, he was unproven at anything even approximating the highest level. He was also comparatively inexperienced, with less than two full seasons of top-flight football under his belt.

However, none of that has held Morelos back. Within a matter of months, he has taken the Scottish game by storm.

Last season, Rangers struggled for goals. Their top scorer in Scottish Premiership action was Kenny Miller with 11, while in all competitions it was Martyn Waghorn, who hit 16. Morelos, in just 20 games in the Scottish top flight, already has 10 goals to his name. The most in the league.

Throughout 2016/17, the Glaswegian outfit scored 56 goals in 38 league fixtures, averaging 1.5 goals per game. This term that average has already soared to 2.2, with 13 goals in six league games. Their new Colombian strike sensation has had a huge hand in that improvement.

With 11 Scottish Premiership strikes, Morelos has been responsible for scoring 24 per cent of his team’s total league tally thus far.

Furthermore, his goals have made a key difference in two games. His double away to Ross County secured all three points, while his strike away to Partick Thistle grabbed one point.

“He is scoring goals now and he is learning the language, two or three lessons a week to get his English up to speed. In terms of the football language, he is learning every day with the manager.

“We can see the hard work he is putting in on the training ground and he is getting his rewards with his goals so it is great for the team.”

WHAT DOES MORELOS BRING TO THE TEAM?

Wallace also spoke to Rangers TV about the quality Morelos provides in front of goal, saying: “It was the first thing I noticed. We were doing a small two-v-one transition drill in his first training session so there was a lot of quick-fire shots at different angles and speeds. Every single shot was back of the net: corners, top corners.”

The Colombian’s finishing is undoubtedly one of the most noticeable aspects of his game, with his decision-making and ability to find the right shot in a matter of seconds catching defences out. Indeed, all six of his league strikes have come with no more than two touches. Three were first-time efforts, and the other three involved one touch to control and one to find the net.

Those figures, taken in isolation, may give some the wrong impression that Morelos is no more than a poacher in the Kris Boyd mould. The reality is he offers so much more to Rangers, contributing outside of the final third and even when the team is out of possession.

His work ethic is to be celebrated; no cause is truly lost to the 21-year-old and his energy and desire are evident in his tracking back defensively. This is seen below against Partick, where he drops deep in his own half to cut out an opposition move. 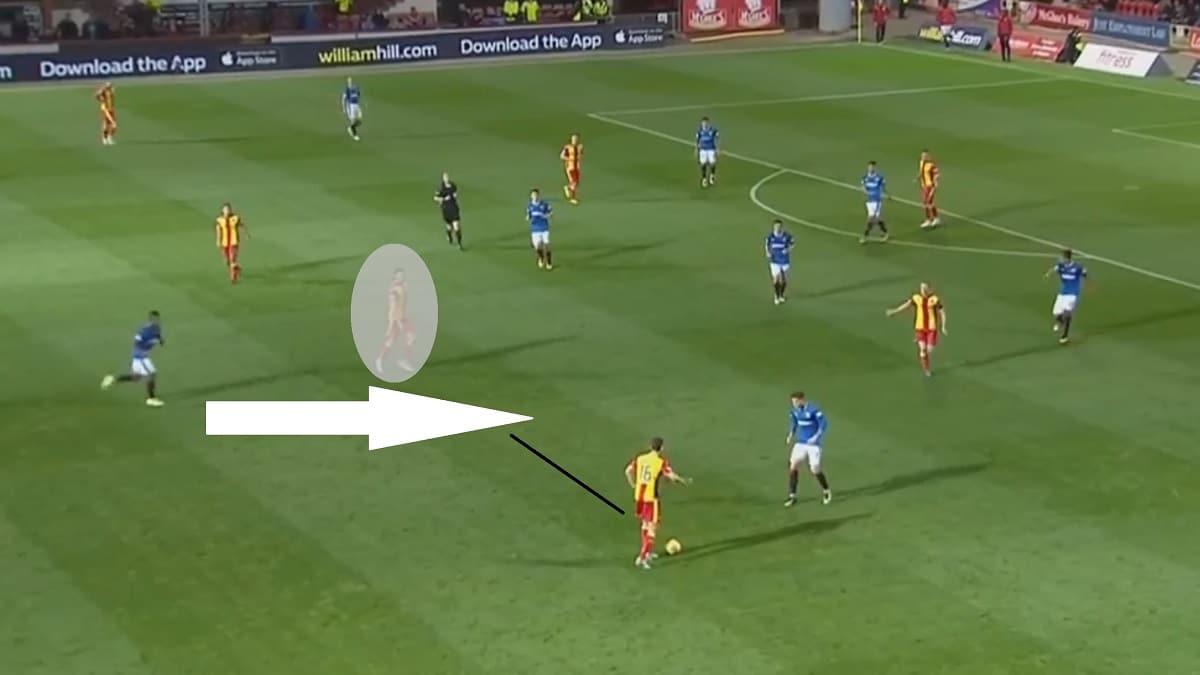 One of his goals combined these particular traits with his aforementioned poaching skills – against Ross County he was fooled by a dummy from opposition goalkeeper Scott Fox, but, rather than give up, he came back, dispossessed the shot-stopper and tapped into an empty net.

Morelos also offers more in possession than the traditional poacher would, often dropping deep in the channels to receive the ball from Rangers’ centre-backs. From there he plays wall passes to runners off the ball, holds up and waits for support, or simply combines with a nearby team-mate with a sideways or backwards pass.

In these instances he utilises underrated physical strength as well as an intelligence use of his body to hold off attentive man-markers, sound technique to control the ball under pressure, and clever understanding to pick out a pass.

The ability to pressure effectively in the defensive phase, as well as his ability to hold up and link up in the formative stages of an attack, are especially important for a Rangers side that often come up against packed defensive opposition whose primary aim is to sit deep and frustrate. 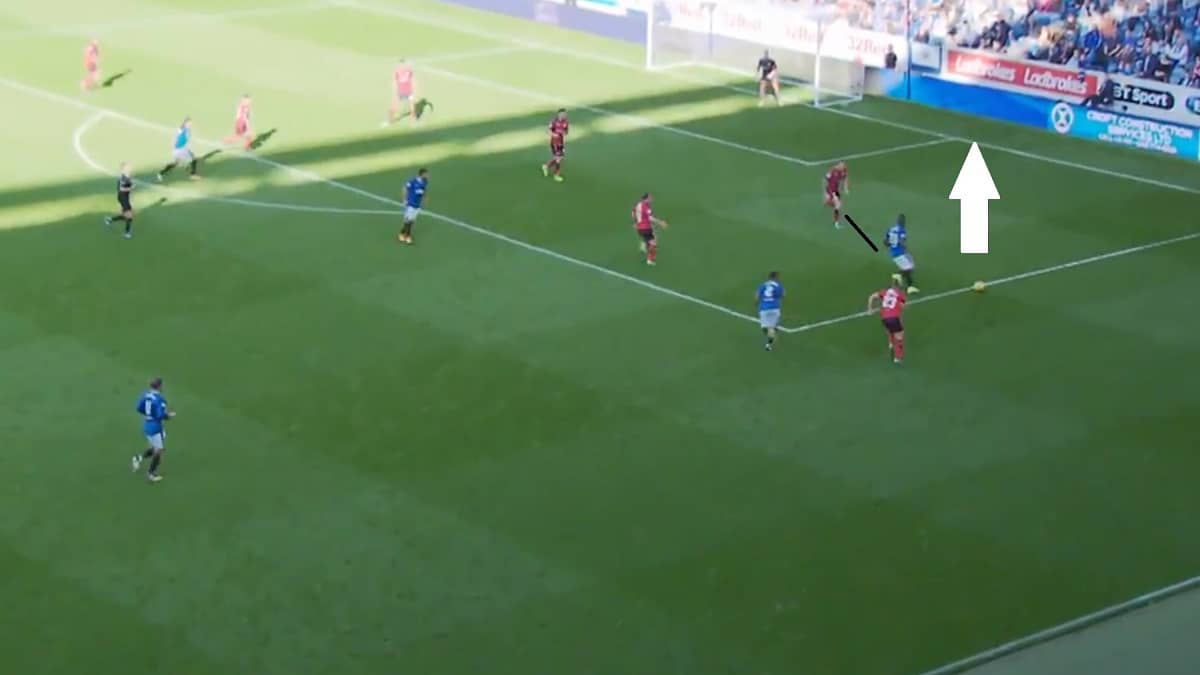 However, when given the opportunity to run into space, generally on the counter-attack, Morelos also evidences plenty of pace and one-on-one quality.

An example of this is seen in the above graphic, where he commits his marker and goes around the outside before finding the net.

HOW DOES MORELOS COMPARE TO RANGERS GREATS?

With 11 goals in 22 league games so far, Morelos has made a rapid start to life at Ibrox. His record of a goal every other game is exceptional and merits comparison with the club’s former striking greats.

Of recent times, Rangers’ most prolific finishers were Nikica Jelavić, who went on to play for Everton, and Boyd, who went on to become the all-time top scorer in the Scottish top tier. In their respective first seasons at the club, the former averaged 0.7 goals per game, while the latter averaged one goal per game.

In the mid-1990s, Marco Negri and Rod Wallace were the club’s finest finishers. The former found the net 0.56 times per game on average during his first campaign, while the latter averaged 1.1 goals per game during his debut season.

Going back even further, Ally McCoist and Mark Hateley formed one of the iconic strike partnerships in Scottish football history. Their little-and-large combination was extremely effective in one of Rangers’ most successful eras, but neither were particularly clinical in their first terms at Ibrox.

If Morelos can maintain his current strike rate, he could rival Boyd and Negri and enjoy one of the most prolific beginnings to a Rangers striker’s career in recent memory.