It's not often a player with 11 league goals by January who is playing for a team sitting eighth in the table manages to go under the radar, but Alfred Finnbogason is doing just that.

The 28-year-old Icelandic striker is the forward a number of teams in the Premier League need, they just haven't' realised it yet.

It's peculiar when you think about it. Brighton and Hove Albion, West Brom, Stoke City, Swansea City and Newcastle United are all in the market for a striker but there have been no links to the Augsburg star.

All five clubs are in desperate need of a reliable goal getter but not one who breaks the bank. The former Real Sociedad man ticks both of those boxes.

He's not a long-term solution to their problems but for clubs in a relegation battle, it's all about short-term results and Finnbogason is well worth the gamble.

Who is Alfred Finnbogason?

The forward has been a name known across Europe for a while after scoring 59 goals in 70 appearances for Heerenveen between 2012 and 2014. He was once tipped to be the next great striker to pass through that league and go onto bigger and better things.

Real Sociedad took the leap of faith and parted with €7.5million to bring him to La Liga in the summer of 2014. It was the same summer they lost Antoine Griezmann to Atlético Madrid and Finnbogason was supposed to replace his goals in the team.

His one and only season in Spain was a disappointment. He netted just twice in 23 league games and Greek side Olympiakos loaned him for the first six months of the 2015/16 campaign.

He failed to set the league alight and scored the one goal for the club.

He returned to Real Sociedad but was immediately loaned out to Augsburg. He hit the ground running, scoring seven goals in 14 appearances for the Bundesliga side. The move was permanent in July 2016 in a deal reported to be worth £3.6million.

His first full season as an official Augsburg player was underwhelming. He netted just three goals in 13 appearances but the club did change their manager in December 2016.

There was a lack of continuity and the club struggled because of it, not just Finnbogason.

This year has been different. He's involved in more first-team action and has already surpassed last year's total of 1132 minutes in the Bundesliga.

Manuel Baum's faith in Finnbogason has been justified with the striker being involved in 13 goals already if you include his two assists.

What does Finnbogason bring to the team? 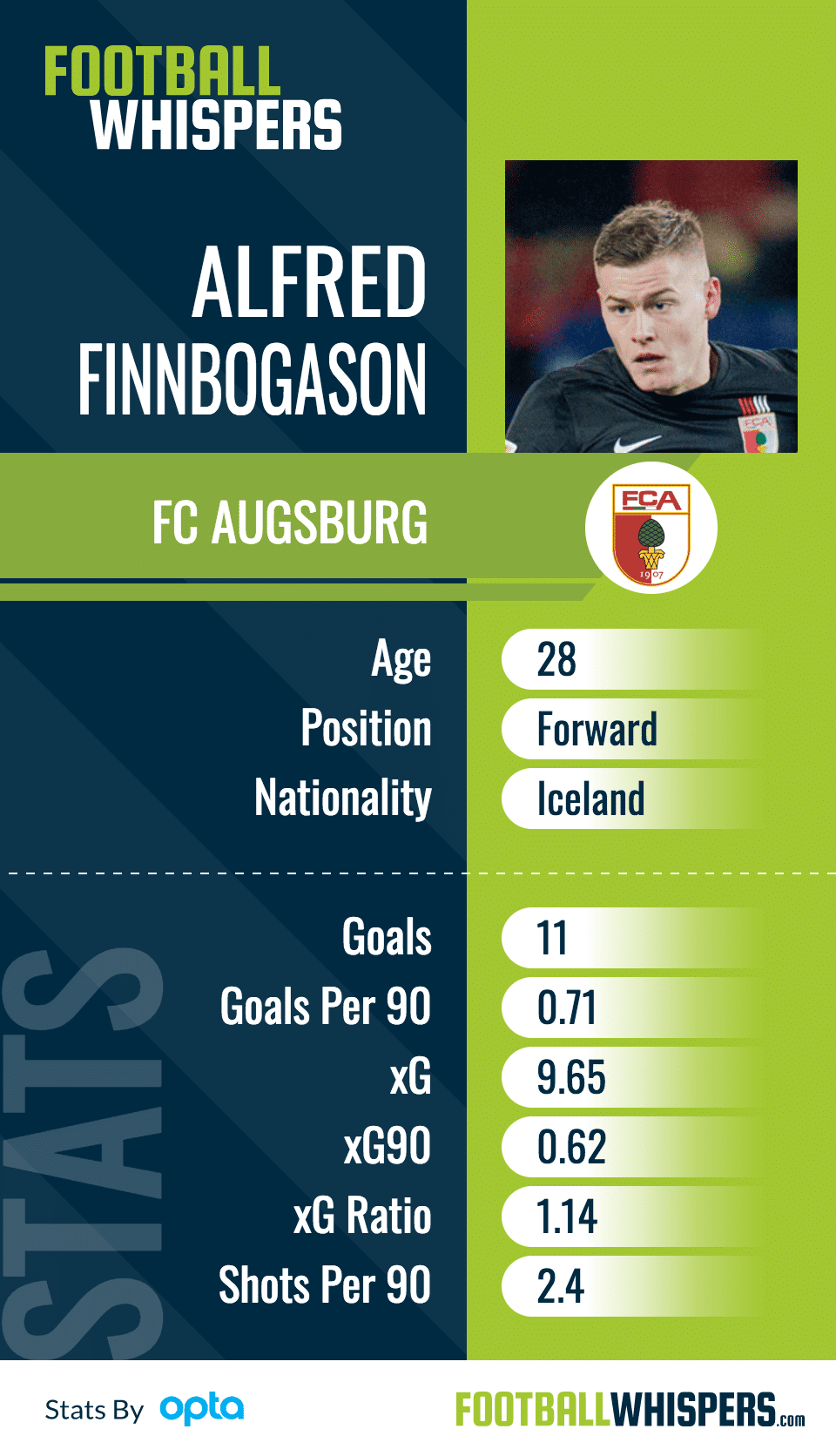 He's got a knack of being in the right place at the right time. He's a poacher and a goal getter. If you expect him to pick the ball up in his own half, dribble past four or five players before curling home from distance you'll be disappointed.

He completes just 0.9 dribbles per 90 minutes and all of his 11 goals this season have come inside the penalty area, with five of those coming within the six yard box.

He follows play into the area, often ghosting in unnoticed, and benefits from tap-ins and rebounds. It's an art. Gabriel Jesus is often accused of bringing nothing but that to the Manchester City team, but does it really matter how he puts the ball in the back of the net so long as he's doing it? The same goes for Finnbogason.

As you can see in the graphic he's outperforming his xG for the season. The xG ratio – which looks at how many goals he's scored for every one xG – has him above average when compared to the 22 players across the top five leagues in Europe with 11 goals or more this season.

In a recent feature on the website, we looked at the most clinical strikers in Europe and, in terms of making the most of the chances coming his way, Finnbogason is more clinical than Robert Lewandowski and Harry Kane.

We're not suggesting he's better than any of those players. He's just got a better goals per xG ratio than all of them.

Chances in the Premier League are scarce so you the teams in a relegation fight need someone not just reliable, but a player who is prolific.

Furthermore, Finnbogason is actually averaging more goals per game than Swansea and Brighton, albeit his sample size is much smaller. However, it does add context to the numbers.

Chances are scare because shots for these teams are few and far between. Stoke, WBA, Brighton and Swansea all average ten shots or fewer per 90 minutes while Rafael Benítez's men manage 12.

Augsburg average 14 shots per game, the fifth highest, but there's generally more of an even spread in the Bundesliga. After all, teams actually try to beat one another.

Finnbogason's deal runs until 2020 but Augsburg are the sort of the club to sell for the right price.

Premier League clubs, backed by the TV deals, have an abundance of money to play with these days and £10million is no longer considered a large amount. For that price that could bag themselves a player who could well help them climb up the table.