Alexis Sánchez: the worst signing in Manchester United history? It's certainly difficult to argue against such a statement.

There have been several high-profile players to have struggled at Old Trafford – think Juan Sebastián Verón, Kléberson and most recently Ángel Di María – and instances of money being squandered: Bebé, anyone?

Yet none of these signings had club-altering ramifications. None impacted United off the pitch quite like Sánchez.

It is, of course, not all the Chilean's doing. His representatives may have requested £500,000-a-week but it was those in power at United who authorised such an exorbitant weekly wage.

They did so out of desperation, or perhaps it was arrogance. United wanted to one-up Manchester City in the transfer market and were prepared to do whatever was required.

“Alexis is one of the best attacking players in the world,” José Mourinho, then manager of United, said with no little evidence from Sánchez's time at Arsenal. “He will bring his ambition, drive and personality – qualities that make a Manchester United player.”

Sánchez's arrival skewed United's pay structure. He was parachuted in as the club's top earner. Those with a proven track record at Old Trafford, understandably, felt they deserved close to parity.

It's why David de Gea has asked for close to £4000,000 a week in order to sign a new contract. Any why 21-year-old Marcus Rashford was able to secure a £200,000-a-week deal this summer despite having only hit double figures once in a Premier League campaign.

Sánchez's contract has three more years to run. He is a millstone around the club's neck. A problem that must be solved.

According to The Times, the 30-year-old is open to leaving. And Roma, per The Telegraph, are interested in a loan deal. I Giallorossi would need around half of Sánchez's weekly wage subsidised by United, however.

Paying at least a quarter of a million pounds every week to a player no longer at Old Trafford wouldn't be a good look for the Red Devils. But it's an out for United, one they should take.

Sánchez made his name in Serie A. As a young fleet-footed winger he dazzled for Udinese and helped the club qualify for the Champions League in 2011 – although Le Zebrette failed to make it past the qualifying round after the forward had moved on to Barcelona.

A return to Italy offers Sánchez an opportunity to rebuild his career and, perhaps more importantly, his reputation. Over the course of 18 months, the Chile international has gone from one of the world's most fearsome forwards to a joke figure.

Here's a surprise, though. In terms of a statistical output last term, Sánchez wasn't bad. He could even be classed as good.

He was top among Premier League forwards for big chances created per 90 (0.61) and in the top ten for assists per 90, interceptions per 90, tackles won per 90 and passes attempted per 90. 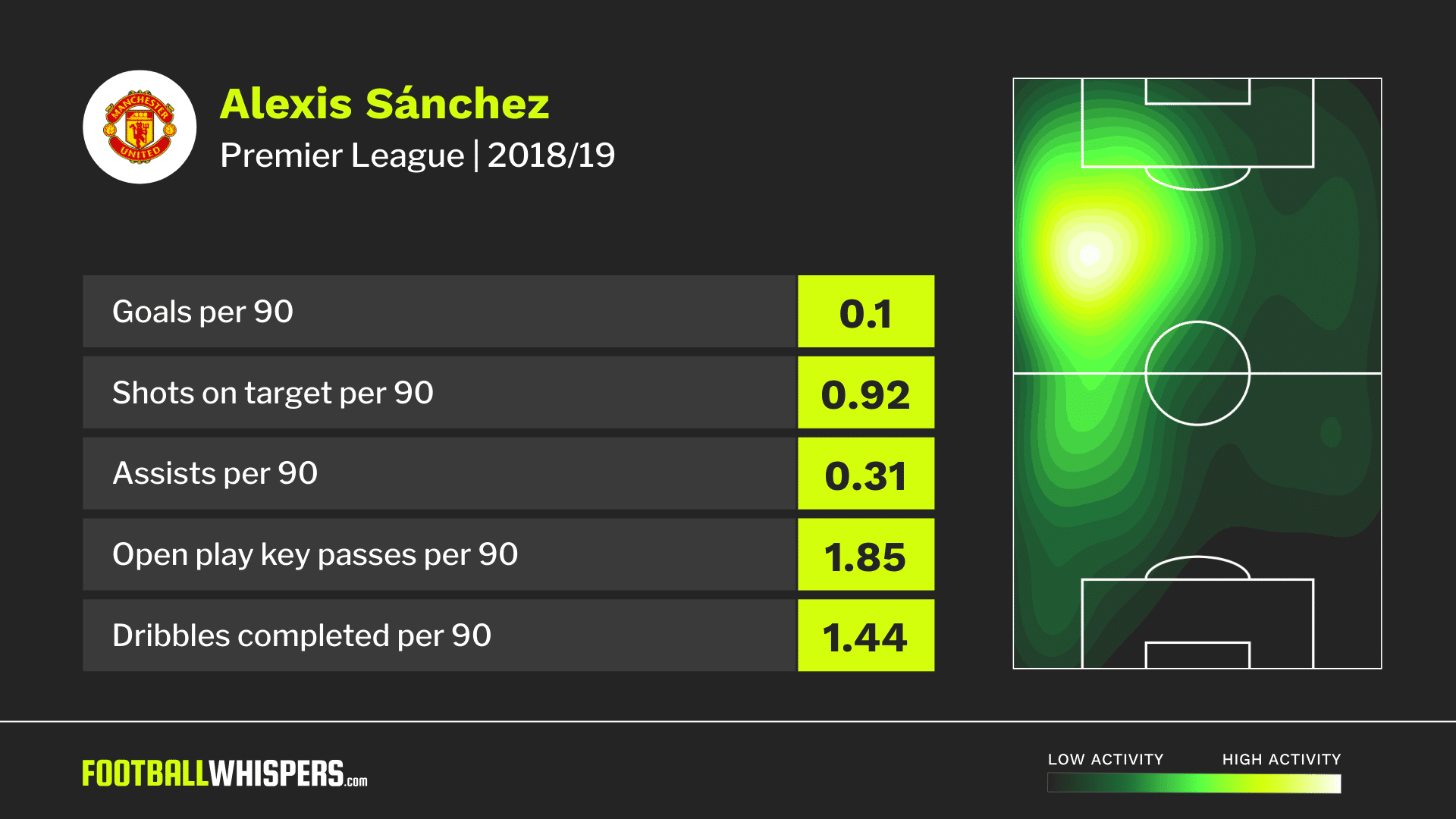 Context is required, though. Sánchez achieved this output within a small sample size, 877 minutes. That equates to fewer than ten full matches in the Premier League.

There were moments where the Sánchez of Arsenal would suddenly appear: a burst of acceleration past a defender, a drop of the shoulder to skilfully evade a challenge, a clever pass for a team-mate.

These moments were sporadic but in a small sample of data enable the Chilean to stand out. However, the 70,000-odd United fans at Old Trafford every other week, the millions watching at home, and former players, such as Gary Neville, can't all be wrong when analysing Sánchez's form last season.

“It’s an absolute mystery,” Neville said on Sky Sports in May. “I don’t know if anyone can put any science or sense behind what has happened to him. It’s as if one of the most tenacious football players you will ever see with and without the ball has lost absolutely everything.

“That’s from confidence, to his energy, to his legs, to his dribbling abilities, to his goals. There is nothing left in Alexis Sánchez at all. And we are still waiting for him to turn up.”

That is unlikely to happen at Manchester United. It may not happen at any club. Sánchez has featured in close to 650 games in his senior career for club and country; he may have burnt out.

Yet if there is any chance of a career kickstart, United must give Sánchez the opportunity. Not for altruistic reasons, it must be said. From a business perspective, the Red Devils must speculate – in blind hope – to accumulate.

Allow Sánchez to leave for Roma. Cough up half of his wage every week. Give him every chance to succeed in Serie A. If he does so, then in a year's time the Red Devils could have an asset they can sell, as opposed to a dead weight they can't shift.

It is the only chance United have to save face with Sánchez. Sadly for the Chilean, his legacy is firmly cemented.