There is a 19-year-old striker at Willem II who's been tearing up the Eredivisie since January.

A tall, athletic forward with a delicacy of touch and an eye for goal that has seen him score 12 times in 12 appearances for the Dutch club, the teenager is reportedly drawing interest from Chelsea and Barcelona.

But Alexander Isak has been here before.

The young Swede joined Willem on loan from Borussia Dortmund in January. He'd only signed for BVB two years earlier, bought from AIK in his homeland amid a maelstrom of hype.

He was just 16 when he made his debut and scored his first senior goal for AIK, having joined the Allsvenskan club aged six and progressed through their youth ranks. 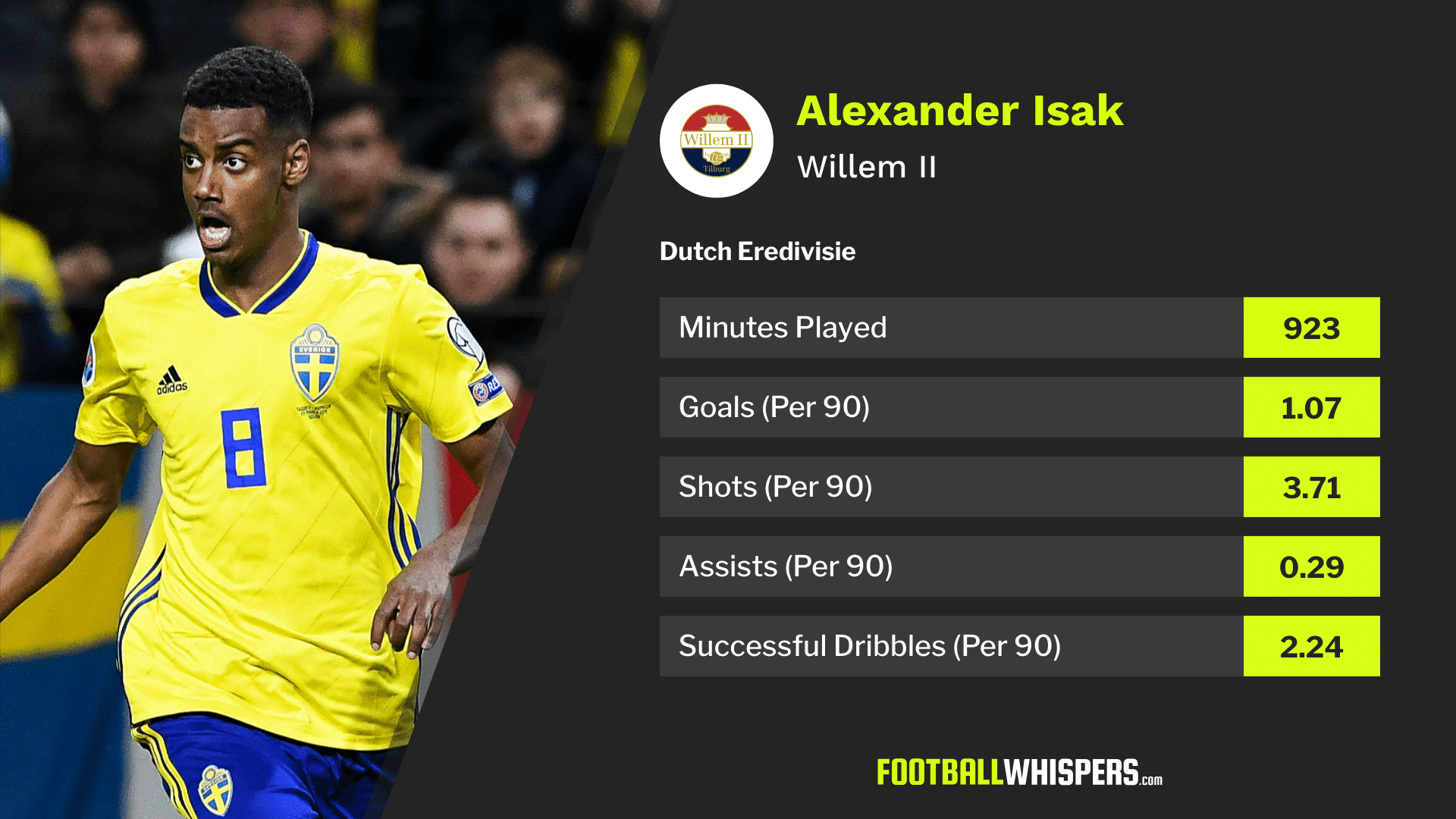 Thirteen goals in his first season in senior football, the Swedish top flight's Newcomer of the Year award and an arrival on the international stage all convinced Dortmund to part with €9million to sign the prodigious striker in January 2017, fending off rival interest from Real Madrid among others.

But two years at Signal Iduna Park yielded little progress for Isak. Signed under Thomas Tuchel's reign, the German coach reportedly didn't want the young forward, and he made just one first-team appearance – a 3-0 DFP Pokal win over Sportfreunde Lotte in March 2017 – before the end of the season.

Most of Isak's playing time at Dortmund since then came under Peter Stöger, the stop-gap appointment after Dutchman Peter Bosz's ill-fated succession of Tuchel. Five Bundesliga outings brought no goals and Michy Batchuayi's arrival on loan from Chelsea at the end of the 2017 January window spoke volumes about the confidence Dortmund had in Isak.

A regular only in Dortmund's second string during the first half of 2018/19, Isak could be forgiven for doubting whether he'd made the right call in leaving AIK so early.

Standing 6ft 3ins, Isak's combination of size, subtlety and skill – and, of course, Swedishness – earned him the moniker “the next Zlatan Ibrahimović”. But that hat has never really fit. Isak doesn't share his superstar compatriot's swagger; the younger man is confident but self-doubt is not anathema to him in the way it is for the combustible and cocksure former Barcelona and Manchester United man.

Opportunities have been thin on the ground for Isak at Dortmund, a club evidently unafraid to promote young players ready for the highest level – the examples of Jadon Sancho, Christian Pulisic and Ousmane Dembélé attest to that.

But on the occasions he was thrown into the fray, Isak's demeanour betrayed a young man who was not yet sure enough of himself to display his full qualities, in at the deep end but clasping the side of the pool firmly.

A loan to the Eredivisie, breeding ground of so many of Europe's great strikers down the years – including, of course, Ibrahimović – seemed a wise move for all involved.

Away from the pressure of the tensest Bundesliga title race in years, away from the rapid pace and elite competition of Germany's top flight and the Champions League, Isak has room to take stock at Willem, to find himself as a footballer, to shake off lazy comparisons.

And he is thriving. In his last three games alone, he appears to have grown exponentially: a hat-trick in a 3-2 win over Fortuna Sittard showcased a renewed ruthlessness; two goals and two assists versus Heracles demonstrated he is capable of being a decisive contributor, whether scorer or creator; and scoring his side's only goal in a 4-1 defeat to league leaders Ajax showed he has the temperament to compete with the best.

With 12 goals and three assists in just 12 appearances for Willem, the vultures are again circling for Isak. Chelsea, despite the fact a looming transfer ban may prohibit them from registering any new plays in the next two transfer windows, reportedly fancy the 19-year-old striker, and Barcelona have listed him among potential long-term replacements for Luis Suárez.

Meanwhile, faith is growing in Dortmund that the player they signed from AIK two years ago is as exciting a prospect as they had hoped after all. But Isak has danced this dance. He's read all these headlines before.

“I have just heard about the rumours,” he told Expressen recently.  “But I have not intended to focus on it. I don't want to let such things affect me.”