When it comes to finding and developing forwards,

That title now belongs to Borussia Dortmund who possess the Midas touch when it comes to attacking talent.

The Germans have been a rival to Atleti for quite some time. BVB helped nurture Robert Lewandowski, turning him into one of the most feared forwards in Europe. Pierre-Emerick Aubameyang went from goalscoring winger to clinical poacher while at the Westfalenstadion. More recently, Paco Alcácer enjoyed the most potent period of his career while wearing yellow and black.

That isn’t taking into account the success stories of Mario Götze, Marco Reus, Ousmane Dembélé and Jadon Sancho. In fact, their biggest flop in recent years was Ciro Immobile, a player with 92 goals since he returned to Italy ahead of the 2016/17 season.

Dortmund have had plenty of success. Never before have they had two of the best attackers in the world aged 20 or under within their grasp.

Erling Håland was the most in-demand teenager in world football before his move to Dortmund in January. His return of eight goals in five appearances since the switch justifies the hype surrounding him.

But it is Alexander Isak who has set tongues wagging.

The 20-year-old is currently playing for Real Sociedad having left Germany at the start of the season. His signing was considered a coup, with plenty tipping him to be the heir to Zlatan Ibrahimović.

He didn’t get many chances with BVB but a loan spell with Willem II in 2018/19 aided his development. While in the Eredivisie he netted 13 times in 16 appearances. He became the first foreign-born player in the league's history to score 12 goals in his first 12 appearances.

It was a big statement on his part. He looked to have done enough to force his way into Lucien Favre's thinking.

But, to the surprise of many, Dortmund decided to cash in on the 12-cap Sweden international, recouping the £6million they paid to sign him in 2017. At the time it was viewed as a strange move. Isak was young with huge potential and BVB needed a forward. But they opted to instead move him on and La Real were the beneficiaries.

However, reports in Spain claim the German side have a buyback clause in his deal and can bring him back to the Westfalenstadion for €30million. On current form, that makes Isak a bargain and the potential long-term successor to Håland.

Though the former Red Bull Salzburg man only joined last month, there’s a release clause in his deal that becomes active next summer. The reported fee is a relatively low £63million. A number of clubs would be able to afford that without much of a problem meaning Dortmund would be powerless to keep the Norweigan goal machine.

For most teams, that would be a disaster. But Dortmund's decision to part ways with Isak is looking smarter with every performance. The exposure to first-team minutes has helped him develop in a way he couldn't while sat on the bench in Germany.

His start to life in Spain was slow and he averaged a goal a month initially. But it all changed in December. He scored in the 2-2 draw with Barcelona on December 14 and hasn't looked back.

Isak was the hero of last week's dramatic 4-3 win over Real Madrid in the Copa Del Rey, netting twice before coming off the bench in the Basque derby to score and assist in a 2-1 triumph. The strike against Athletic Club took his tally to seven since the turn of the year. 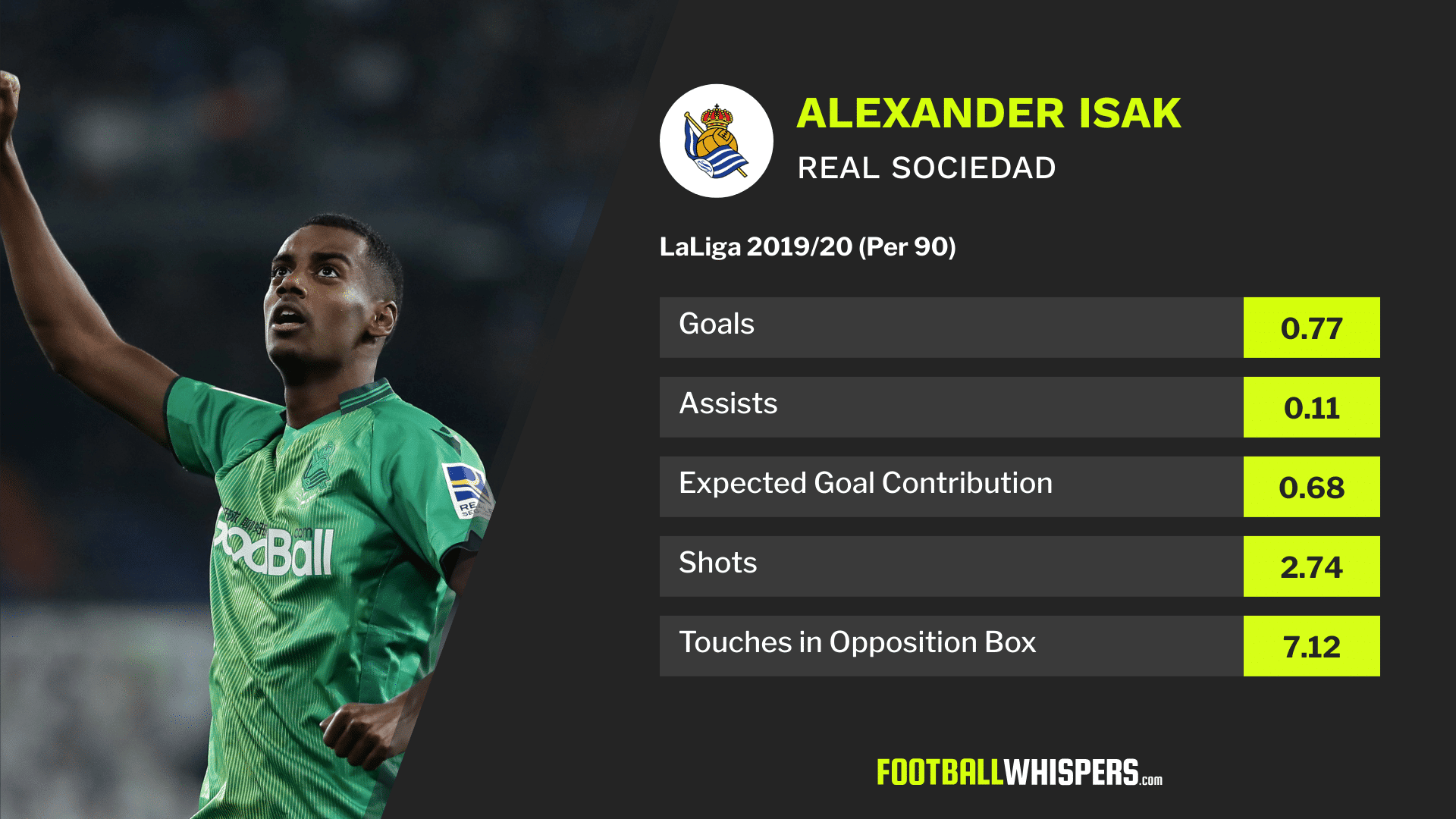 The 6ft 3in forward is delivering on his early promise. He may be running hot at the minute and overperforming against his underlying numbers but his expected goal contribution per 90 is still at an impressive 0.68. Over the course of a 34-game Bundesliga season, that equates to 24 goal involvements. But given Isak is a superb finisher, he'll always exceed those numbers.

Furthermore, he's only averaging 2.74 shots in LaLiga in a team not competing for the title. If he returned to Borussia Dortmund, Isak would be playing in a team which would create more chances for him. He seems readymade for a second chance in Germany.

Selling Isak to Real Sociedad could turn out to be a masterstroke. What Dortmund are doing in the market, at least in the attacking sphere, is unheard of. They have deservedly dislodged Atleti as the kings of that area.