In the opening stages of Liverpool’s game against Stoke City, Joe Gomez picked up a knock on an already injured ankle, forcing him to later undergo surgery which resulted in the end of his season and the end of his chances of appearing at the 2018 World Cup.

The right-sided utility defender had found his most comfortable position, not in Jürgen Klopp’s Liverpool side, but in Gareth Southgate’s England setup where he operated on the right side of a back three.

The former Charlton youth had found the position which blends the strengths he offers at both right-back and centre-back, and combined the best of them in one role. He delivered good performances against Germany, and then against Brazil as he put in a Man of the Match performance up against the Brazilian superstar Neymar.

It’s necessary to detail Gomez’s role in the side, and subsequent absence from it, when looking at what has happened since, and why the surprise call up of his Liverpool team-mate Trent Alexander-Arnold shouldn’t be too much of a surprise.

There aren’t any other English centre-backs who can offer what Gomez did, hence his swift introduction to Southgate’s back three despite his young age and inexperience. Phil Jones would be a decent option, hence his inclusion in the final squad, but Southgate has looked elsewhere to bring the mobility and attacking ability from the back.

Kyle Walker has had no choice but to evolve under the management of Pep Guardiola at Manchester City, where full-backs are asked to chime into the midfield more than they are to make overlapping runs.

Walker’s all-round game has improved since his Tottenham days, and Southgate saw this as an opportunity to try him in the wide centre-back role previously occupied by Gomez. In the two March friendlies against Netherlands and Italy the results of the experiment were positive enough, and the Man City man is likely to be used at centre-back.

This in turn left a new vacancy in the right wing-back position, and the obvious answer lay in the shape of Alexander-Arnold who had replaced, and succeeded Nathaniel Clyne who had been out of the reckoning for club and country due to injury, and isn’t a natural wing-back anyway.

Alexander-Arnold on the other hand, is, and he’ll provide back-up, or given the way his season has gone so far, competition, for Kieran Trippier in this specialist role.

Like Gomez, Alexander-Arnold boasts a wide skill set which can see him operate in two main positions. While Gomez’s build and extra strengths could see a future for him in the centre of defence, his 19-year-old team-mate has the attacking ability, technique, and vision to play in the centre of midfield.

It’s a position he operated in regularly during his time in Liverpool’s youth teams, and has played there twice for the first team since the injury to Alex Oxlade-Chamberlain.

This makes him perfect for the wing-back role, where he will effectively be a part of a midfield four. Former winger turned full-back Ashley Young will slot in similarly on the other flank, either side of two nondescript but steady English central midfielders, Jordan Henderson and Eric Dier.

Given Alexander-Arnold’s performances in big Champions League games this season, especially in the quarter-final first-leg against Manchester City when he nullified the Premier League’s Young Player of the Season, Leroy Sane, Southgate must surely be pondering whether to start him over Tripper.

Tripper himself has appeared in some big games this season, bagging assists in the Champions League against both Real Madrid and Juventus. He has also played nine games as a right wing-back for his club in a similar system to the one Southgate will use.

The data tells us that these players offer certain strengths, but the fact one has played in front of a back three more regularly than the other needs to be considered.

Tripper has the most assists with five to Alexander-Arnold’s one, and also leads the way for the majority of the statistics related to passing, including superior passing accuracy, more key passes with 1.41 per ninety minutes compared to Alexander-Arnold's 1.08, and more big chances created with a total of seven to four.

The stats show Alexander-Arnold to be better in general build-up play and more incisive when attacking. He has more touches in the opposition box with 1.71 per 90’ to Trippier’s 1.17, more successful take-ons with 1.14 to 0.61, and more scoring attempts with a total of 12 to 7 despite playing fewer minutes. 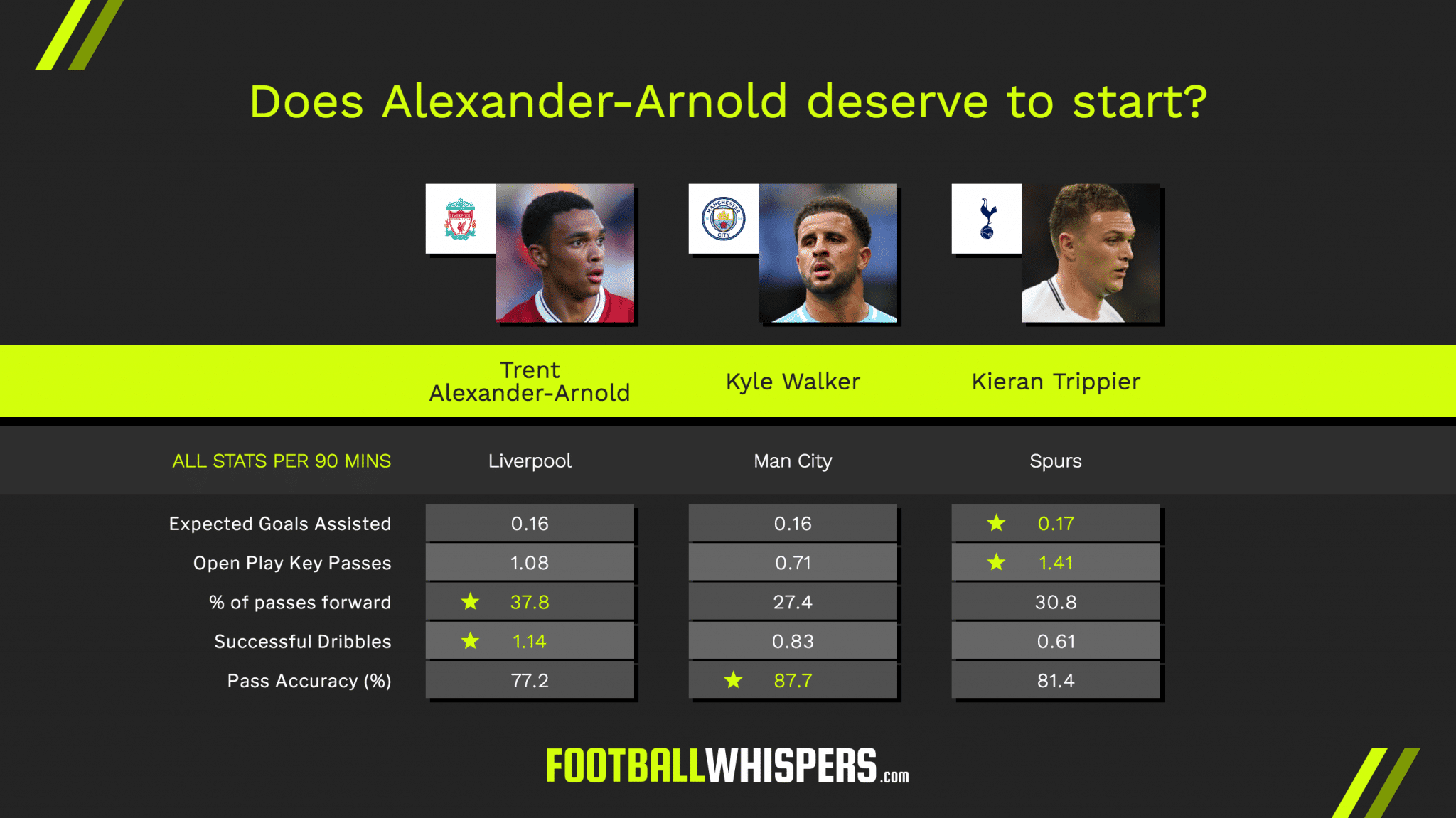 The eye test has shown Alexander-Arnold to be an excellent crosser on his day, and he can also take a set piece. He has three goals this season, one of which came from a free kick in a Champions League qualifier against Hoffenheim back in August. Trippier has no goals, but leads the total assists statistic 9-3.

There is give and take defensively too, with Alexander Arnold making more interceptions per 90′ with 1.6 to 0.98, but Trippier coming out on top in tackling 2.44 to 2.11

The expected goals data from Understat (below) shows Alexander-Arnold is more effective at influencing his side’s build-up play and more involved in front of goal, while Tripper creates with his passing and crossing, confirming what the above numbers are suggesting. 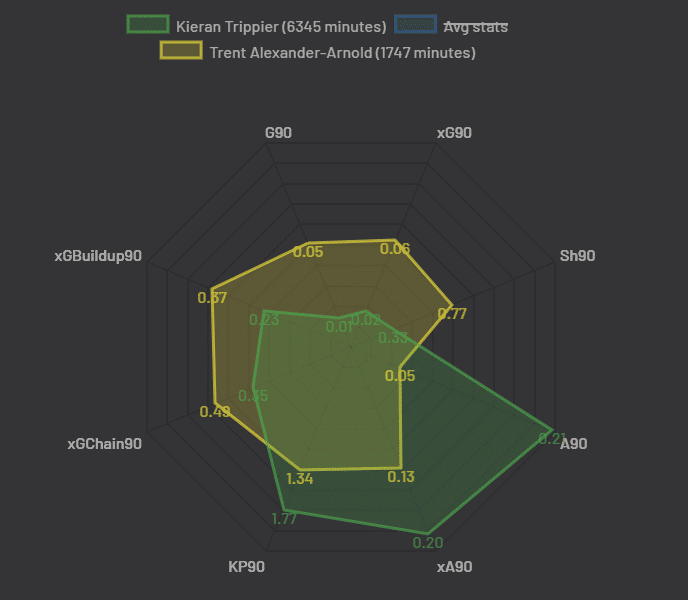 The style of their two club sides also have to be taken into account, but there are certain similarities between them which make a reasonably good case to use the stats as a telling comparison.

The results show that Alexander-Arnold is closer to an England start than expected and, along with his experience at the top level in high pressure games this season, show that he is more than ready for a place in the squad despite being uncapped.

It remains to be seen whether he will start, but on the evidence here he should be an option in the first eleven when Southgate wants something more inventive on the right of his midfield four rather than just typical wing-back play.

Alexander-Arnold’s inclusion in the squad makes complete sense, and a place in the starting eleven would too.