Nathaniel Clyne’s long term injury, picked up in the summer of 2017, meant that Liverpool and Jürgen Klopp faced a dilemma at right-back.

Would they have to dip into the market as was the case in the left back position, where they signed Andy Robertson to support Alberto Moreno, or would they trust one of the club's youth players in the position until Clyne returned?

The uncertainty over Clyne’s injury, and doubts over the length of time he would be out for, didn’t make things any easier, but in some ways it forced Klopp to do something which will serve the club well in the long term.

In the end, the situation was vital in bringing through two of the club’s most promising prospects, both of whom brought different things to the right-back position, and both of whom have gone on to feature in or around the England squad.

Joe Gomez has found his perfect position at international level after impressing at right-back in some games for Liverpool. He's slotted in nicely on the right of Gareth Southgate’s back three, where he brings his natural centre-back qualities as well as those learned playing right back at the highest level for his club.

Trent Alexander-Arnold, meanwhile, has settled into the right-back position in the absence of both Clyne and Gomez in recent weeks, and has been vital to his side’s progress in the Champions League, putting in impressive performances against Leroy Sane in both legs of the quarter-final against Manchester City.

He was also recently invited to train with England, despite not being called up for the squad proper.

“I think we have all seen him grow, all together,” said Klopp when asked about the player following the recent win at home to Bournemouth.

“You see the games, you see the performances. Because Clyney was injured, he was one of two options we had. We never thought about bringing in another full-back because both are very young and Joe is kind of a centre-half.

“Now he had to deliver [regularly] and he has delivered. He delivered a really good game.

“The problem with being that good at a young age is that your career is still so long, so on one hand side you have to improve a lot and that’s how it is. It’s all good, he is a good boy. It was an outstanding cross for [Mohamed Salah‘s] goal.”

Klopp’s words reflect his faith in the player who is now the club's first choice in the position, even now Clyne has returned, and will only be spelled due to his age as they'll look to avoid burn out.

He has already improved from February, when Klopp made the following comments on the teenager's development.

“It's good for him that he doesn't have to play every week. He is still a young boy. He improved a lot, especially in training in the last few months.

“In the beginning he trained a little bit like a kid, ups and downs. Meanwhile it's a consistent high level, good attitude and he can show his skills.

“The football part of the position seems to be pretty easy for him. He is quick, very quick, fantastic right foot, and even the left foot is not too bad, really good crosses, football smart, a good view for space and stuff like that, so it’s all good, but a lot to learn of course.”

The games against thee Premier League champions took his performances to the next level. This was a display of the highest quality, at the highest level of football, against one of the trickiest wingers in the business.

Following shaky outings against Guardiola decided to target Alexander-Arnold's side, but he proved that the slightly below par league performances, where he wasn’t helped at all by his team-mates, were aberrations.

The league game against Bournemouth showed the other side of his game, and he was able to contribute to the attack, landing one excellent cross on the head of Salah for the Egyptian to reach 30 goals for the season.

He had sent a ball in during the first half from which Salah should also have scored, and his attacking play down the right was of the highest quality.

His attacking dashboard below, from Stats Zone shows plenty of crosses, two key passes, one assist, and a number of ball recoveries indicated by the + signs. 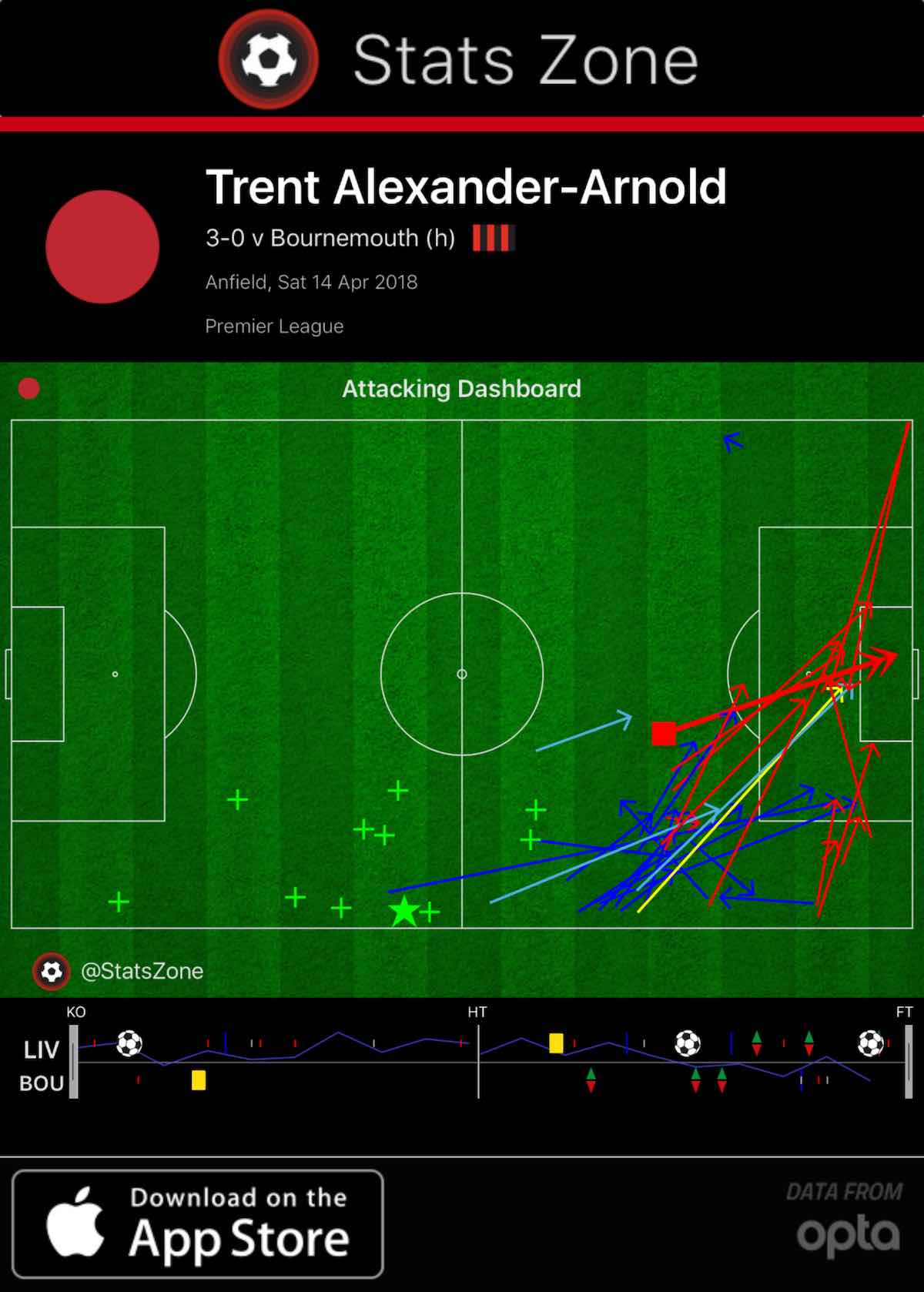 The defensive displays against City, and the continued demonstrations of his ability to cross and pass a ball might support the idea many have that midfield is his best position, but seeing as he’s thriving at right back, why move him?

Full-backs with great all-round football skill are often moved into more central or attacking positions eventually, but given the things Klopp demands from his full backs, he might be best served helping Alexander-Arnold become one of the best around in the position, rather than moving him inside.

“This kind of full-back now is much more of a midfield player,” Klopp told Sky Sports in September 2016.

“The kind of football they play, in half-spaces, they are the other winger sometimes, the central midfielder sometimes.

“The rule is: be an option, get the pass or be available for other players.”

The kind of footballer the German is describing here, is Alexander-Arnold.

The 19-year-old’s crossing and passing have improved this year, despite the odd wayward attempt. He averages 1.5 key passes per 90 minutes, and has an two assists and two goals in Champions League and Premier League matches this season.

Kyle Walker is widely considered to be the best right-back in the league, but Alexander-Arnold’s numbers in the expected goals chain are at least on a par with the City man over the past two seasons, and are better in most areas.

These number show how important a player is to their side’s build-up play, and effectively show their direct and indirect contribution to goals. 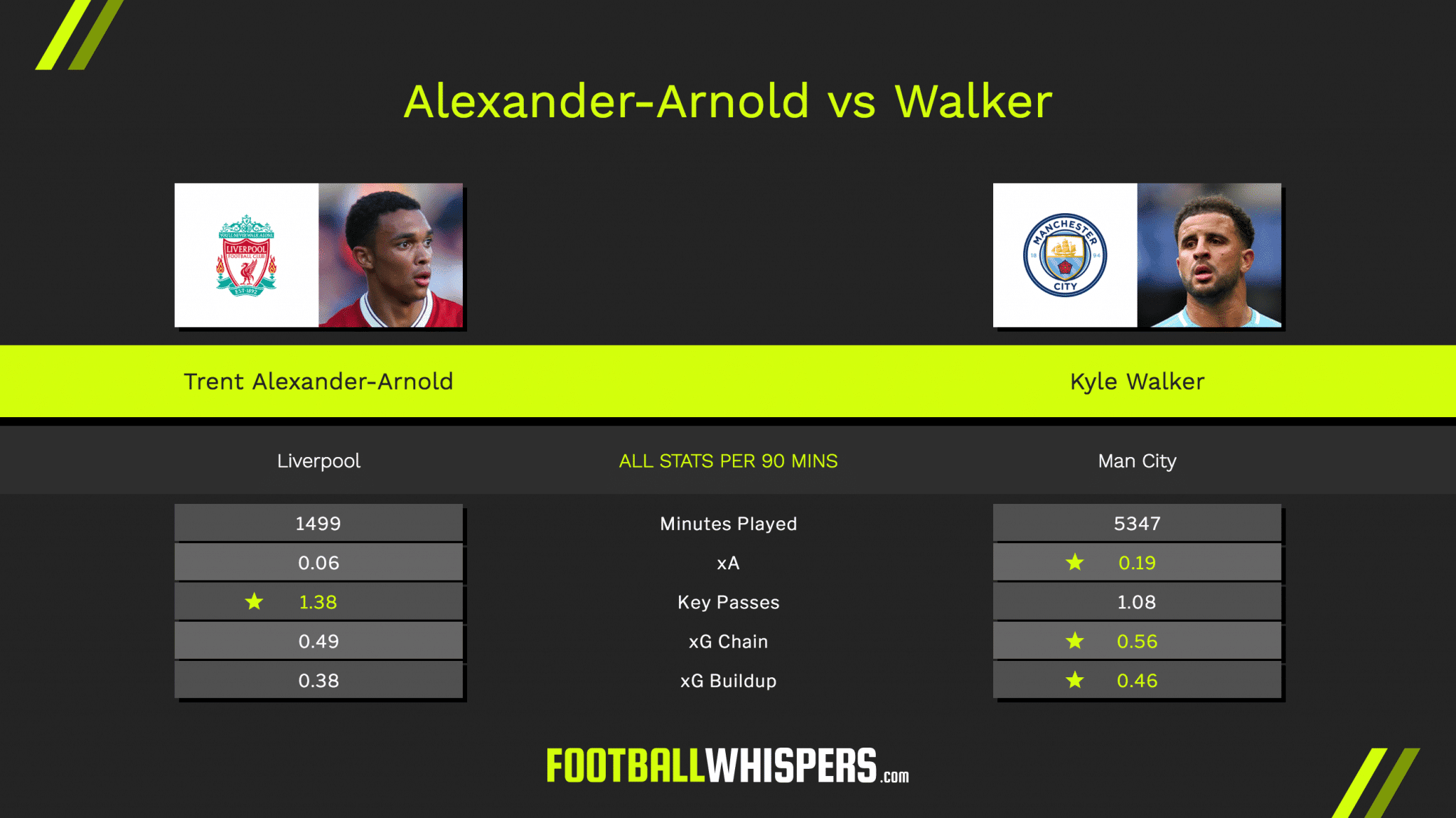 Even the best full-backs make similar mistakes to those Alexander-Arnold has at times this season, but his ability to recover from them and put in some solid defensive performances, at such a young age, means that he has the potential to be one of the best in Europe in the position.

At his best, Alexander-Arnold is already both, and makes no excuses for himself if he makes a mistake in one area of the game.

At just 19, with such a rounded game, Liverpool are set at right-back for years to come, as long as he remains fit. The local lad can be a symbol of the club's progress under Klopp, as he grows in stature with the club.