According to many, Trent Alexander-Arnold can’t defend.

During that time, the 21-year-old has come up against Cristiano Ronaldo, Leroy Sané, Lorenzo Insigne, Franck Ribery and Philippe Coutinho name but a few. Generally, the Liverpool right-back comes out in top in these individual battles yet whenever that happens the credit seems to go the way of the team.

But whenever he struggles, talk turns to how the England international is a weak link defensively and questions circulate as to whether he should be moved into midfield. In Liverpool’s 2-1 win over Crystal Palace, Alexander-Arnold was apparently given a tough afternoon by Wilfried Zaha.

The former Manchester United man did shrug off the No.66 in the build-up to his goal, a situation the Reds’ full-back could’ve done better in. But it was the only time in the match that the Palace winger got the better of Alexander-Arnold.

Zaha was largely well managed throughout, attempting and completing just three dribbles against the Premier League leaders. For context, this season he’s averaged 7.18 dribbles per 90 and he’s completing 4.88 of them.

The Palace No.11 got away from Alexander-Arnold and Liverpool just once but, unfortunately for them, it resulted in a goal. And that is what people remember.

It’s further ammunition for those who simply don’t rate the Reds academy graduate as a defender and that moment will be used along with the times Burnley’s Dwight McNeil and Cardiff City’s Nathaniel Mendez-Laing caused him problems down the right flank.

This is Trent getting skinned by Zaha all game ?https://t.co/m9LG86Z13F

He’s viewed by the masses as an attacking full-back with a number of defensive flaws. They act as though he’d be viewed differently if he was playing for a team under the cosh a lot more than the Reds are.

It’s a lazy assumption and one that simply isn’t true.

What is true, however, is that Alexander-Arnold isn’t perfect. But at 21, he doesn’t have to be. Liverpool conceded just 22 goals last term with the first-choice right-back appearing in 29 of the 38 matches.

The likes of Fabinho, Virgil van Dijk and Alisson no doubt shore things up in the defensive third but an obvious weak link would’ve been exposed by now.

The three aforementioned players often receive special praise when the Reds put in a monstrous defensive performance but, on occasion, the best player on the pitch for Liverpool has been Alexander-Arnold.

He’s praised for his offensive contributions. He’s an assist machine and a creative hub for the European champions. Jürgen Klopp shapes the attacking patterns of play around his right-back. That’s how vital he is to the Reds.

He’s, rightly, lauded for his performances going forward. But, strangely, he’s underrated when it comes to the defensive side of things. 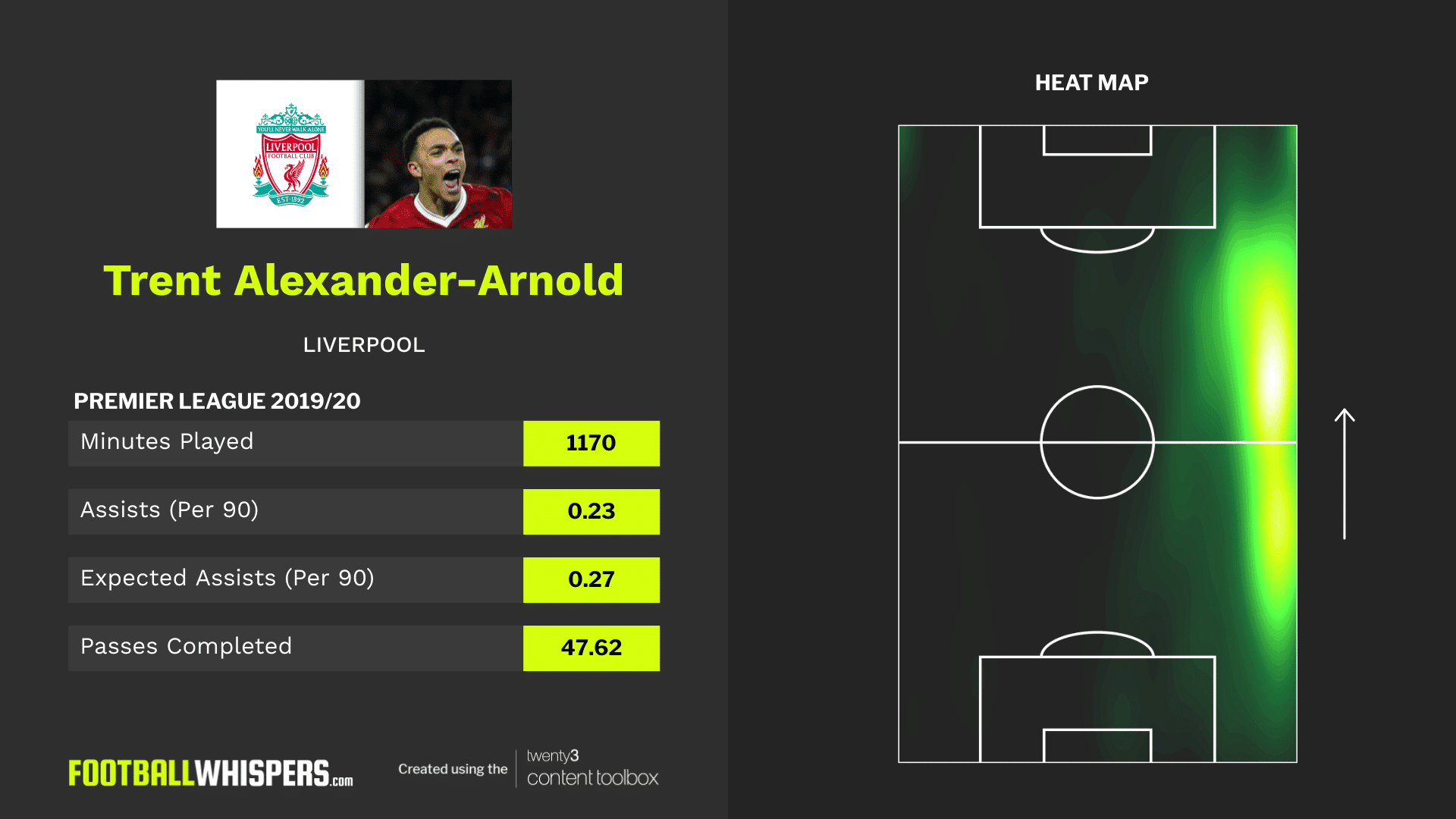 Defensively, his job is as basic as they come. He’s there to stop crosses getting into the area and he’s expected to cover the right-sided centre-back. It’s this part of his game that people tend to overlook.

Against Napoli in Naples, he was arguably the best defender for the Reds on the night. The Italian side ran out 2-0 victors but had it not been for Alexander-Arnold that scoreline could’ve been much worse. He read the game well, put out fires, tracked runners and did his very best to defend against the overloads down his side on the night.

In all honesty, it should come as no surprise. It probably didn’t to Liverpool fans. The youngster always delivers when it matters most for the Reds.

He played in every knockout game in the Champions League last season apart from the 3-0 loss to Barcelona. Alexander-Arnold was part of the team to beat Paris Saint-Germain at Anfield and Bayern Munich in Bavaria. He kept tabs on Eden Hazard during a 2-0 victory over Chelsea, too.

The narrative surrounding the Liverpool right-back is an odd one. Because he doesn’t make countless tackles like Aaron Wan-Bissaka and he isn’t making last gasp blocks, the impression is he simply isn’t a good defender. Yet when called upon in the big games, the England international is assured and reliable more often than not.

He can, at times, be sloppy in possession, as he was in Naples. But that comes with the territory of being a playmaker. He’s attempting risky passes and they don’t always come off.

The idea that he’s not a good defender, however, needs to be put to bed. He’s not just a brilliant attacking full-back, he’s one of the most well-rounded ones in the  game.