Alex Teixeira was the talk of the Premier League during the January 2016 winter window and if reports are true it appears history will repeat itself next month.

The versatile Brazilian forward has, according to reports in TuttoSport, been placed on the transfer list after Fabio Capello, the new Jiangsu Suning manager, decided that the 27-year-old was now surplus to requirements.

The Chinese Super league club parted with £38million to sign the former Shakhtar Donetsk attacker ahead of Chelsea and Liverpool. The Premier League duo had strong interest in the yet to be capped Brazilian, and the Reds had a £34million bid rejected.

Teixeira wanted a move to the Premier League but the two interested English clubs failed to meet his release clause and he ended up in China.

“Let's put it like this: everyone always knew that I wanted to stay in Europe and move to the English Premier League club,” Teixeira told Shakhtar's official website at the time.

“But, unfortunately, all the proposals that came from them, were somewhat windy and did not contain anything concrete.”

A move to England wasn't to be for Teixeira. At least not in 2016. He's since scored 30 goals in 71 matches for Jiangsu Suning but hasn't set the league alight like many had anticipated.

His stock remains high, however, after what he achieved while at Shakhtar. The Ukrainian league may not be the best but many who have excelled atS hakhtar have gone on to join ‘bigger' clubs in their career.

Henrikh Mkhitaryan shone after joining Borussia Dortmund and got a move to Manchester United while Willian continues to be one of the most undervalued players in the Premier League, constantly delivering for Chelsea.

Does Teixeira suit the Premier League?

The answer to that question isn't as straightforward as it should be. Back in 2016 Teixeira seemed an ideal fit for the English top flight, but after two years plying his trade in the Chinese league there are question marks against him. How fit is he? And, most importantly, does he still possess the same ability?

After all, if you're not playing at the highest level on a regular basis, you aren't having to push yourself and your instincts begin to wane. It's only natural.

While £38million may not be a lot in the modern transfer market, it's still a large amount for a player who has never played in England before. That's not to say all players need to be ‘Premier League proven', but the step up in quality from the Chinese League is steep.

But, working off the assumption Teixeira would be able to get up to speed and rediscover his Shakhtar form, he'd be the sort of player to improve all of the top six clubs in England.

Though he's primarily deployed as a striker for Jiangsu Suning, while playing in Ukraine he was used in a number of positions. He's comfortable playing as an attacking midfielder and as a false nine but he can also operate as an inside forward on either flank.

With the ability to rapidly kick up a gear paired with his excellent ball control, seeing him cut infield was never a rare sight.

The Brazilian combines quick feet and clinical finishing with a burst of acceleration and it’s easy to understand why he's got such a good goal record for someone who isn't a natural forward. 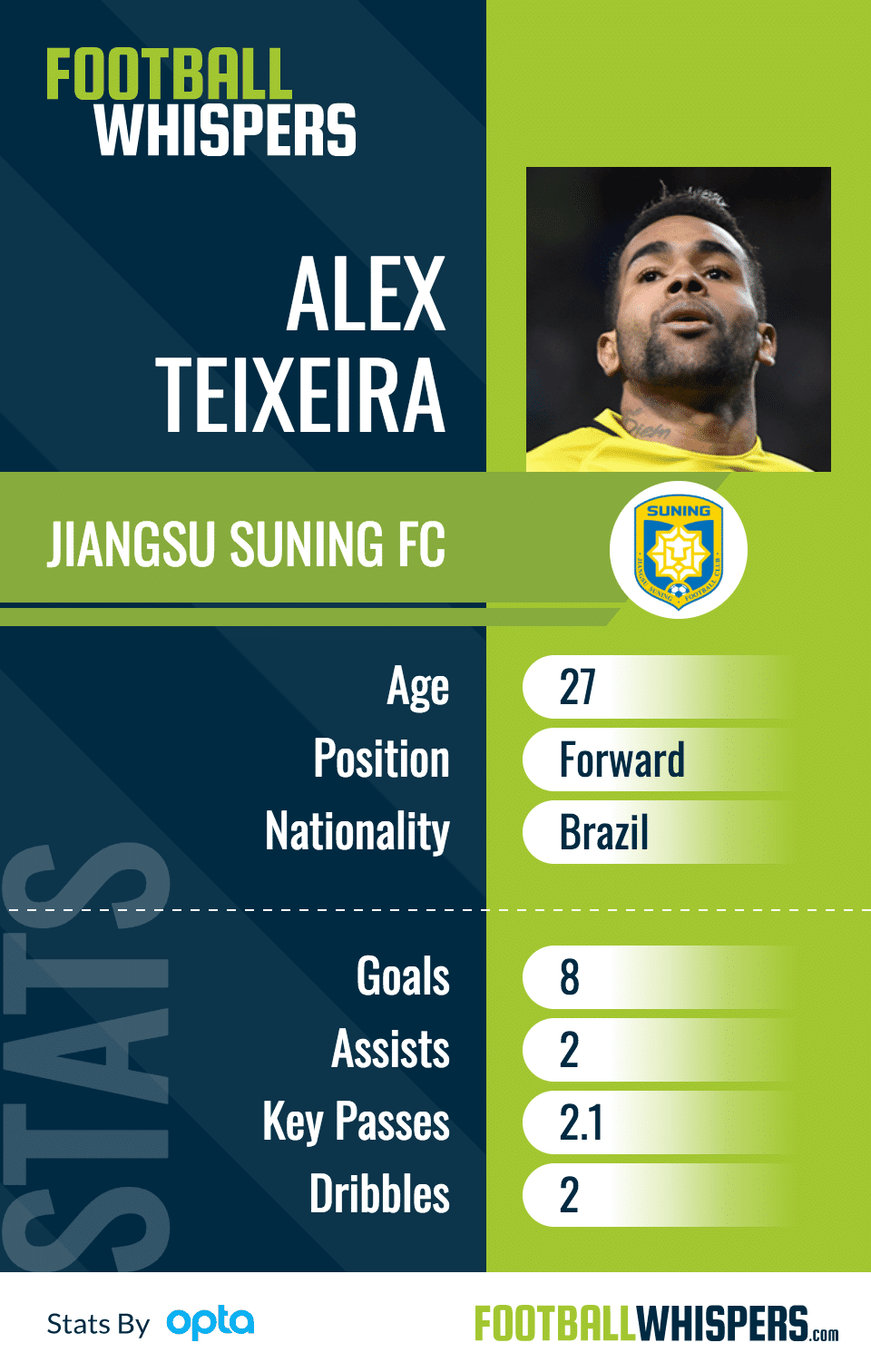 What's interesting, though, is that during his final season with Shakhtar, five of his 22 goals came from rebounds inside the six-yard area after he'd followed the play into the area.

Teixeira has, to an extent, poacher like instincts and this has continued during his time in China. A number of his goals have come from in or around the six-yard box, and he's even started to add headers to his portfolio of goals.

When leading the line he really does come across as a bullish South American forward. His frame is similar to that of Sergio Agüero and Carlos Tévez which makes it likely that he wouldn't get bullied in the Premier League.

There's also a bit of Roberto Firmino about him in the way he harries and presses the opposition. He's selfless and puts the needs of his team ahead of his need to bolster his goal tally.

He carries a goalscoring threat but also helps his team defensively. It's what's required of a modern day forward and he fits the bill.

The Reds have one of the best attacking units in Europe right now. Mohamed Salah is scoring for fun, Philippe Coutinho is having his most prolific campaign, Firmino is on target to hit 25 goals and Sadio Mané can turn the game in the blink of an eye.

However, beyond those four Klopp's options are limited. Daniel Sturridge has been linked with a move away from Anfield in search of first-team football, Dominic Solanke is still too raw to lead the line in a must win Champions League tie and Danny Ings has been injured for the best part of two seasons.

But Coutinho continues to be linked with a move away during the winter window, with Barcelona primed to make a huge offer for the Brazilian maestro. It would be a foolish move to sell the Liverpool No.10 in January but if it happens the Reds would need to add quality, quickly.

Teixeira wouldn't be a like for like replacement for his compatriot and former teammate, but his arrival would give Liverpool options and Klopp would make it work.

Chelsea are in the market for a wide forward. The champions have been linked with Thomas Lemar, Wilfried Zaha and Leon Bailey over recent weeks and while Teixeira doesn't have an identical profile as the aforementioned three, they can all play in similar positions.

If anything, the Jiangsu Suning man is more an attacking threat and has the experience the other two linked players lack.

If Antonio Conte is willing to let Willian leave, and Manchester United are reportedly interested, then Teixeira could be an upgrade in some respects.

He's yet to be linked with a move to the Emirates but like Chelsea, Arsenal are in the market for a wide forward in January. Over recent weeks Arsène Wenger's men, alongside Chelsea, have been linked with moves for Bailey, Lemar and Zaha.

Arsenal need to replace Alexis Sánchez with the Chilean set to leave the club in the summer on a free transfer, if not earlier.

Teixiera may be considered to be a bit of a wild card on the list but it's a signing that could be a potential masterstroke. He'd not break the bank, has a point to prove and he's similar to the Arsenal No.7 in terms of playing style.

José Mourinho wants to bolster his attacking options next month. The Red Devils have been linked to Lemar and Bordeaux's Malcom having missed out on Ivan Perišić in the summer.

Teixeira isn't left-footed like any of the three linked but Mourinho may make an exception if he feels the player can offer exactly what he wants.

Teixeira, on paper, doesn't seem like a perfect fit but he's got the work rate Mourinho appears to value from his forward players. He's quick, direct and he's a goal threat. There's enough there for the United manager to work with.

Furthermore, Mourinho was the manager of Chelsea when the Stamford Bridge outfit were first linked to the Brazilian.

The Toffees are in dire need of pace during the January window and it's likely Sam Allardyce will look to address the issue as soon as possible.

Everton are picking points up under the former England manager but there will come a time that Dominic Calvert-Lewin, now leading the line, has a bad patch of form and needs a rest. Everton don't have players with pace to replace the 20-year-old.

With Sandro Ramirez linked with a return to Spain, there's a gap in the squad for an attacker. While the top six might be reluctant to pull the trigger on a deal to bring the Brazilian to the Premier League it's the sort of gamble a club like Everton can afford to make.