Alex Oxlade-Chamberlain‘s move to Liverpool on deadline day in the summer was something of an anti-climax for fans at the time. Reports had suggested the Reds would go on a spending spree never seen by those at Anfield before with Thomas Lemar and Virgil van Dijk still on the agenda.

However, the versatile Arsenal man was the only arrival. The Merseyside club parted with between £35million and £40million, depending on which reports are believed, to secure his signature.

There were plenty of reservations surrounding the deal. Understandable ones at the time, too. Oxlade-Chamberlain's injury record while at the Emirates wasn't the best, the fee seemed like a steep amount for a player with less than 12 months remaining on his current deal and he was arriving to play in centre-midfield, a position he'd rarely played while plying his trade under Arsène Wenger.

Those reasons, combined with the fact he wasn't Naby Keïta, meant the 24-year-old had it all to do to get fans onside before even kicking a ball for his new side.

There was a strong feeling of déjà vu as August turned to September. The recruitment team had failed to land Jürgen Klopp's top transfer targets and the move for the Southampton academy graduate, on paper at least, appeared to be a token gesture.

The fact his life at Anfield started slowly didn't help things either. Klopp, looking to get Oxlade-Chamberlain up to speed with the demands of his system, used him sparingly to begin with.

He didn’t make his first start for the club until the middle of September, away to Leicester City in the Carabao Cup. The England international didn’t have the best of games and many took to social media to call him waste of money.

His next start didn't arrive until the beginning of November when the Reds hosted Mairbor in the Champions League. But the more familiar he became with the Liverpool system, the more Klopp trusted him. This translated into first-team minutes and his substitute appearance against West Bromwich Albion was his 41st for the Reds this term.

After eye-catching performances became the norm for the No.21, there's now an argument to be made to suggest he should be one of the first names on Klopp's team-sheet.

Oxlade-Chamberlain, a boyhood Liverpool fan, has looked to make up for lost time. His assist against West Brom, his second in successive matches, was his eighth of the season to go along the five goals he's notched in the Premier League and the Champions League – his most productive season to date.

He's been trusted to play in Champions League matches against Manchester City and looks set to start the match against Roma in the semi-final. He's come a long way in a short space of time and his form might be one of the reasons Liverpool have reportedly cooled their interest in Lemar. 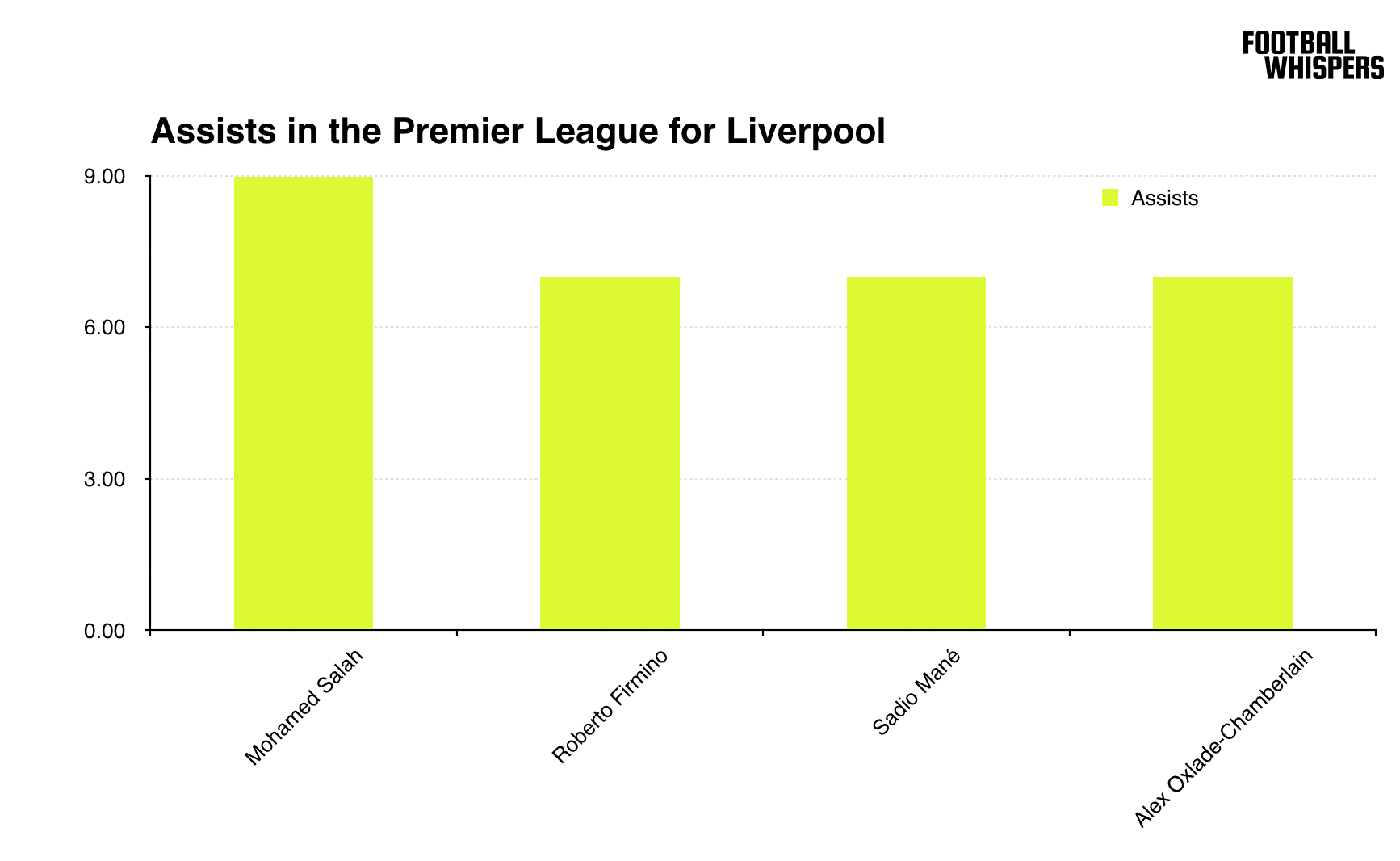 After the recent 3-0 win over Bournemouth, Klopp praised his summer signing when speaking to BT Sport: “What a week for Trent Alexander-Arnold but I’m not sure he’s man of the match, though. I really liked Alex Oxlade-Chamberlain’s performance. He looks like a proper midfield player, using his speed and skill in the right moments.”

In his last 1,142 minutes of play he's been involved in eight goals – a goal or an assist every 163 minutes. An impressive return considering he's being played primarily as a centre-midfielder.

He's averaging 0.42 assists, the sixth best for a midfielder in the Premier League this season. He's completing 1.37 key passes – a number only four Liverpool players can better – and he's chipping in defensively, too, with 2.33 tackles and interceptions per 90. Just like Klopp said, he looks like a proper midfield player. 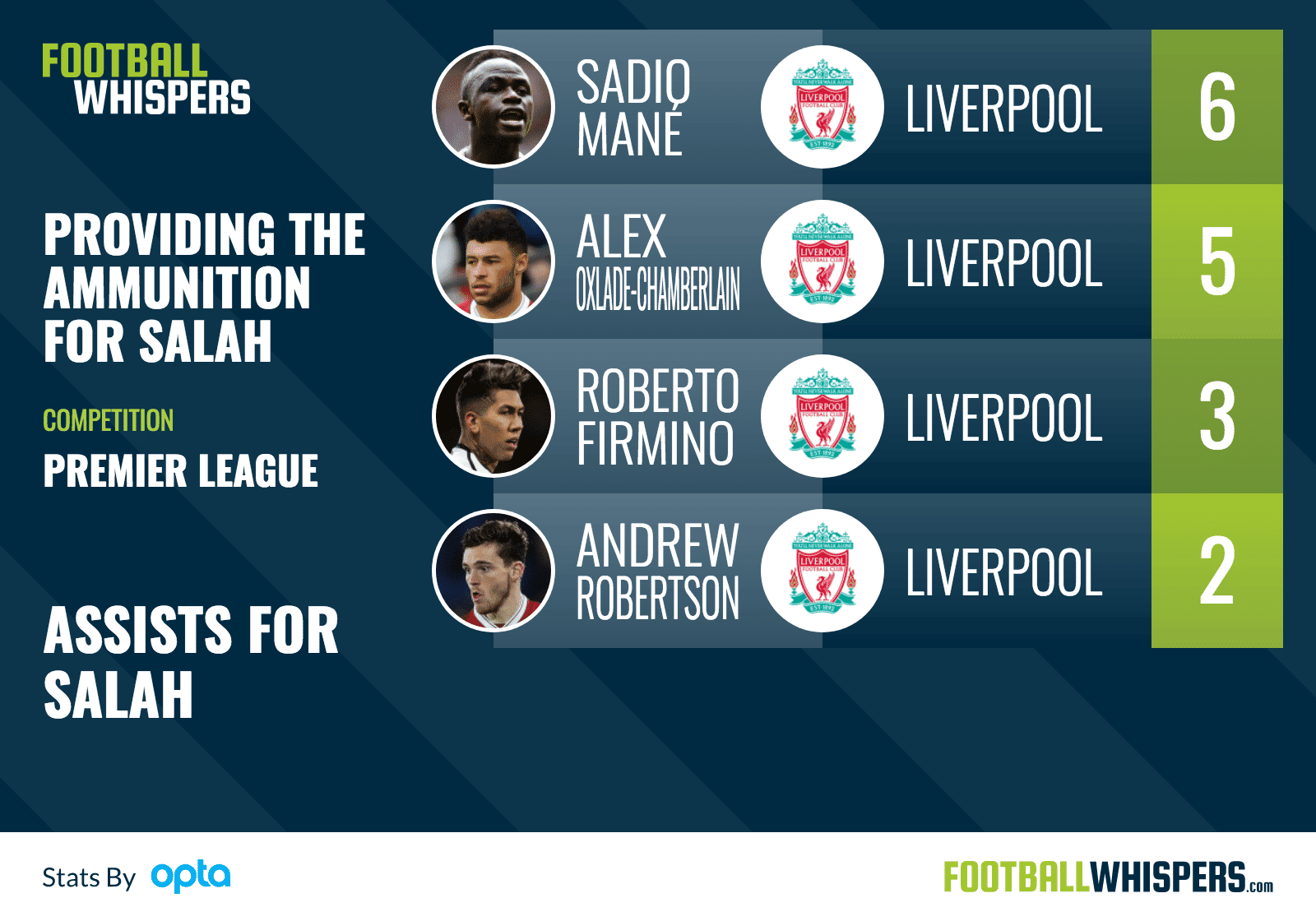 The truth is, the Reds don't have a midfielder in their arsenal with a similar profile to Oxlade-Chamberlain. It's perhaps why he's having such an impact. And it helps that he's struck up quite the understanding with Mohamed Salah.

Of the seven assists the Liverpool No.21 has this term, five of them have been for the Egyptian. This combination is the second best in the Premier League and the second best for the Reds with only Sadio Mané and Salah linking up for more goals this season (six).

The way in which Oxlade-Chamberlain creates these chances for the recently crowned PFA Player of the Year with such regularity shows it's something the team works on during training and this will no doubt please Klopp.

The midfielder often picks the ball up just inside the opposition's half and drives forward into space. The way he can go though the gears is what catches opponents cold and often leads to them rushing out to front him up. This creates all kinds of gaps in the defence and he's able to just thread a pass into the path of a team-mate.

He's the ideal player for transitional football which is essentially what Liverpool use when they look to aggressively press the ball so that there's a turnover in possession. It's in these moments that fans really see the value of the former Arsenal man.

The assists he registered against Newcastle United, Bournemouth and West Brom were nearly identical. People know what's coming but it's not easy to stop because Oxlade-Chamberlain's acceleration and close control is an explosive combo when deployed centrally. He's Klopp's creative whirlwind, perfect for the counter-pressing system, and he's earned his place in the starting XI.