There is no better platform for an ambitious young player than the World Cup. Representing their countries on the grand stage of football's quadrennial extravaganza is a sure-fire way for promising prospects to attract interest from big-name suitors.

It was no surprise James Rodríguez sealed a dream move to Real Madrid after a stunning tournament with Colombia in 2014, or that a 21-year-old Mesut Özil got snapped up by Los Blancos on the back of his eye-catching displays for Germany in 2010.

This summer, there are several emerging talents tipped to do great things in Russia, but arguably nobody is carrying a heavier burden of expectation on their young shoulders than Aleksandr Golovin.

Golovin is one of the finest young players in Russia and the hosts are pinning a lot of their hopes for a run to the tournament's latter stages on the midfielder. Luckily it seems he has the temperament to manage expectations.

And come July interest in Golovin may reach feverish levels, which perhaps explains why Newcastle United are reportedly thinking of stealing a march on some of their more illustrious counterparts, including Arsenal.

According to Transfermarkt, Golovin's current value is approximately £8.7million but expect his price-tag to mushroom should he set the World Cup alight.

Golovin's agent this week claimed there was interest from Newcastle and Southampton while admitting that he was yet to hear from a Premier League top-six side, perhaps subtly hinting that the Magpies may stand a chance should they choose to pursue the player.

“I know that Southampton and Newcastle are showing an interest but not everything depends on Alexander, he has an active contract with CSKA,” Alexander Manyakov said.

What kind of player is he?

If Rafa Benítez was to win the race for the talented CSKA Moscow prospect, what kind of player would he be getting?

Golovin will only turn 22 at the end of May but he has already accrued a significant amount of first-team experience in Russia. He made his debut for CSKA in March 2015 as a precocious 18-year-old and has since gone on to play more than 100 games for the Russian Premier League outfit.

Golovin would certainly inject excitement and flair into the Newcastle midfield. A versatile player who is comfortable operating in the centre, either as a deep-lying playmaker or further upfield, or even on either wing, he has established himself as one of Russian football's most technically proficient players.

This season he has featured regularly in central midfield in CSKA's 3-5-2 formation, a system which has enabled him to link up with the side's wing-backs. His versatility has also allowed him to operate, at times, as a wing-back, although he prefers to influence the game from a central area. 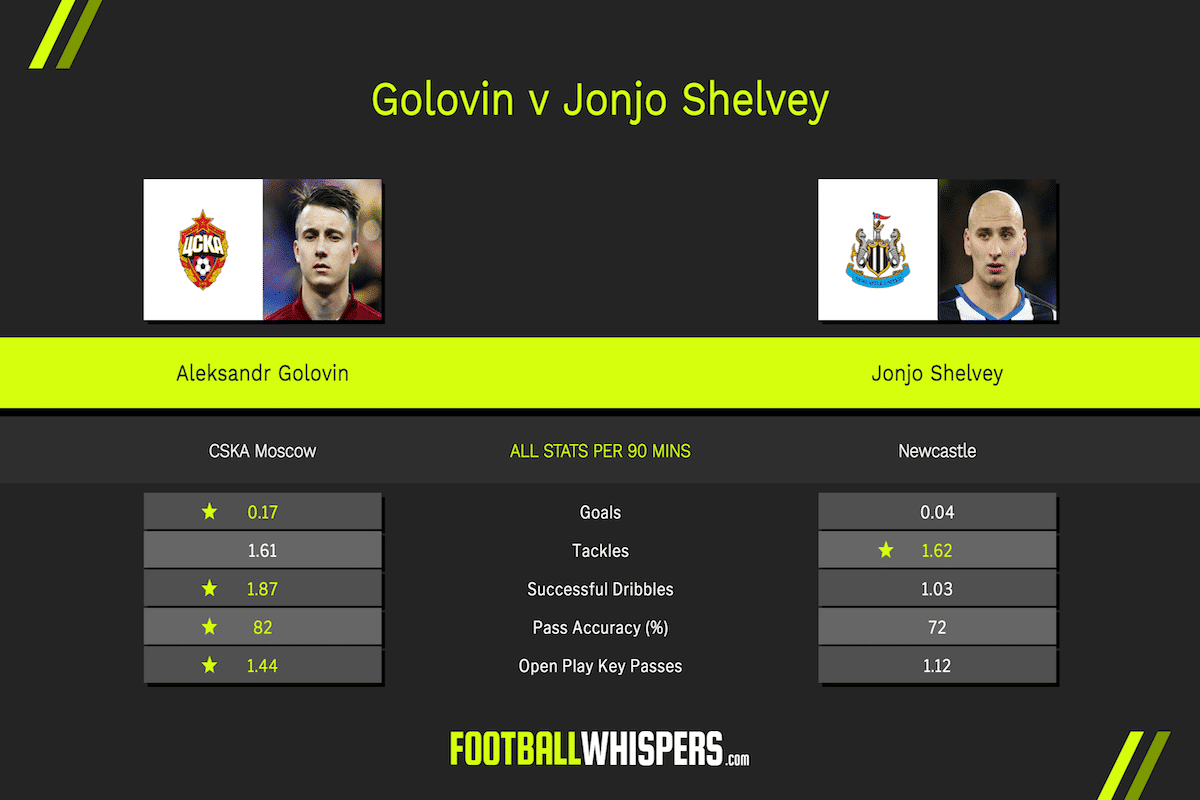 Quick, smart and with two good feet, it was impossible not to notice Golovin when CSKA met Arsenal in the Europa League quarter-final last month.

Over the two legs Golovin was a standout for Viktor Goncharenko's side. The Gunners ran out emphatic 4-1 winners but the youngster was highly influential for the visitors, touching the ball 88 times, more than any of his teammates and only behind Özil and Granit Xhaka's haul for the hosts.

Golovin also showcased his eye for goal, curling a delightful 25-yard free-kick into Petr Cech's top corner to give CSKA an away goal and make it 1-1 after Ramsey's opener.

The Gunners roared back with three goals in 12 minutes – an Alexandre Lacazette brace and another Ramsey strike – to open up a commanding lead heading into the return leg but there was a buzz about the CSKA midfielder who seemed wholly unfazed by the occasion.

Golovin produced another polished display in Moscow and, although CSKA crashed out, Arsène Wenger called him “outstanding”.

Of course, to Arsenal fans, he was a new name, but anyone who had been following CSKA's run to the quarters knew all about the gifted youngster.

Having lost 1-0 to Lyon in the last-16 first-leg, Moscow went to France and stunned Bruno Génésio's men. CSKA clinched a 3-2 victory, with Golovin's delicious right-footed strike setting the visitors on their way.

Although not renowned for his goalscoring, Golovin carries a considerable threat in the final third with his shooting and passing abilities. This current campaign is already his best in terms of goals, with five in 33 appearances.

His composure and intelligence in possession are reflected in his stats. With an average of 42 accurate passes per 90, Golovin is ranked fifth in the Russian League among midfielders. He is also seventh in successful take-ons, averaging 1.87 per game, a statistical indicator of how he possesses the balance and agility to glide past opponents and add urgency to attacks.

Golovin's dribbling and passing skills were honed from a young age on the futsal pitches in Kaltan, the nondescript, 20,000-strong Siberian community where he grew up. Golovin dedicated countless hours to improving his technique, which paid dividends when CSKA scouts spotted him in 2012.

From there, he developed rapidly, even being thrust into Fabio Capello's Russia line-up before he had even started a match for CSKA. Golovin was unable to shine for Russia at Euro 2016 after replacing his injured CSKA teammate Alan Dzagoev but, at club level, he benefitted from Leonid Slutsky's mentorship.

Under the former Hull City boss, Golovin developed physically and technically, blossoming into Russia's most exciting footballing talent. Slutsky left the club in 2016 but Golovin has continued to blossom and, while still not the finished article, he is very much beginning to look like he has outgrown the slow pace of Russian club football.

Despite his slight build, Golovin does not shirk his duty to tackle and break up the opponent's play. Although not the most physically imposing presence, Golovin still averages 1.61 tackles and 1.1 interceptions per 90, ranking him 26th and 22nd respectively in those categories.

He has committed himself to improving the more physically demanding parts of his game and admitted to studying Chelsea midfielder N'Golo Kanté for an insight into the craft of ball-winning.

His creativity and piercing runs through the middle may be the chief reasons for the glowing scout reports, but Golovin's appetite for improving the defensive side of his game gives a sense that he can become a genuine all-rounder.

With a noteworthy Arsenal audition already under his belt, do not be surprised if Golovin becomes one of the most incessantly mentioned names in the summer transfer market.

A strong showing for his country as they host the World Cup will only accelerate his path to bigger things, so it will be interesting to see if Newcastle can win the race for his signature.