Perhaps the most interesting match scheduled for Tuesday in Copa del Rey is the Alcoyano vs Levante duel, so check our detailed preview of the match and our free betting tips.

If you are struggling to decide on the best Alcoyano vs Levante bet, check our top betting picks for this duel:

Levante to Win at Half Time and Full Time

The team from Valencia is last in La Liga and they are still without a win in the league this season even though nearly half of the season has gone. Meanwhile, Alcoyano is in the middle of the standings of their Primera RFEF group, which is third rank in Spanish football.

With Levante struggling so much this season, a good run in Copa del Rey may be good for them, to lift their spirits and raise their confidence. So, we expect Levante to win this match after taking the lead at half time.

We expect Levante to win this match by two or more goals, so we also expect to see plenty of goals in this game – but we will be happy with three goals at least.

Although we expect Levante to win this match by at least two goals, we can also see both teams scoring in this match – especially with Levante being in such poor form.

Also, both teams have scored in 53% of all Levante games in the league this season and both teams have also scored in the one h2h meeting between these two teams, although that match was played seven years ago.

The latest odds and important stats for Alcoyano vs Levante

If you are searching for the best Copa del Rey odds, you can find them here on our website, including the odds for Alcoyano vs Levante:

Although they are currently in the tenth spot in their Primera RFEF group, Alcoyano is actually not that far from a spot in the playoffs – only four points at this moment. So, they can certainly hope to reach the playoffs if they can improve their game a bit more. In any case, the team has three wins and two losses in the last five matches in the league and they've been convincing against Badajoz in the previous Copa del Rey round, beating them 3-0 in that contest.

Being the only team without a win after seventeen games in La Liga is huge chip on the should for Levante, a team that's on their way to being relegated to La Liga 2 this season unless things change dramatically in the second half of the season. Levante is also in poor form at the moment, with four losses and two draws in the last six matches in the league. Meanwhile, Levante demolished Huracan Melilla by beating them 8-0 in the previous round of Copa del Rey. 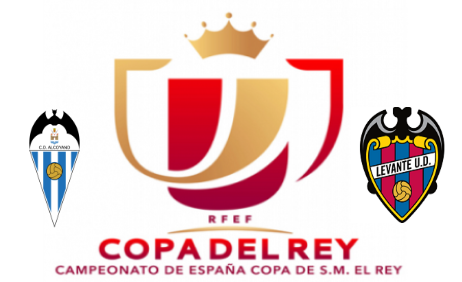