Southampton are one of the poorest attacking sides in the Premier League this season and currently find themselves staring relegation in the face. If Mark Hughes' side can avoid the drop a new striker will be the club’s main priority in the summer transfer window.

While the South Coast club have only conceded 47 goals in 31 games – the 12th-best record in the top flight – the attacking line have undoubtedly cost Hughes and his team points by simply failing to score goals.

Indeed, it says a lot that Charlie Austin has been out injured for much of this season but still sits top of the club’s goalscoring charts with six goals.

According to Sky Sports, Barcelona’s Paco Alcácer is already a Southampton transfer target for the summer – assuming the Saints stay up – and would offer a significant upgrade on the underwhelming Manolo Gabbiadini, who looks set to return to Serie A at the end of the season.

Who is Paco Alcácer?

Alcácer was born and raised in eastern Spain, and lived in the small suburb of Torrent before joining Valencia’s academy. The striker made his senior debut at 16 years of age, playing for the club’s reserve team in Segunda División B and then the first team in November 2010.

Like most promising Spanish players in the modern game, Alcácer enjoyed plenty of success with the national team at all levels. Before he became an established first-team player for Valencia, the striker had already won the Under-19 European Championship while also reaching the final of the Under-17 Euros where he finished top scorer in 2010.

Alcácer spent four full seasons playing for Valencia where he featured in 124 games, scoring 43 goals and providing 17 assists. At the end of the 2015/16 season, in which he managed 15 in 46 outings, Alcácer joined Barcelona for €30million to provide an alternative to Lionel Messi and Luis Suárez.

What are Alcácer's main strengths?

Unsurprisingly given he has Messi and Suárez for company, Alcácer is not coach Ernesto Valverde's first choice at the Camp Nou and is usually given a substitute brief.

Despite limited game time, he has played just 565 minutes this season, Alcácer still averages 0.55 strikes per 90 minutes. In other words, a goal every other game.

That is impressive on its own, but even more so when you consider Barcelona transfer target Antoine Griezmann is averaging 0.65 per 90 and Suárez bags 0.64 per 90.

Ultimately, like so many forwards that have arrived at Barcelona over the years, Alcácer simply struggles to impose himself at the club because he isn’t Messi or Suárez. And despite his lack of game time there is undoubtedly a very good striker there.

What are Alcácer's main weaknesses?

If there is one downside to the Spanish forward’s game it seems to be his reluctance to shoot nearly as much as his counterparts in La Liga.

Although his accuracy whilst shooting is impressive, hitting the target with 48.1 per cent off his total efforts, the number of shots Alcácer averages per 90 minutes comes in at a rather underwhelming 1.91.

It is impossible to compare him to Cristiano Ronaldo (6.8), Messi (6.1) or even Suárez (4) because he simply does not get enough minutes on the field to attempt to match them.

Furthermore, perhaps Alcácer has simply become used to passing the ball to Messi when he may have hit a shot in his previous campaigns at Valencia, where he was the main man. 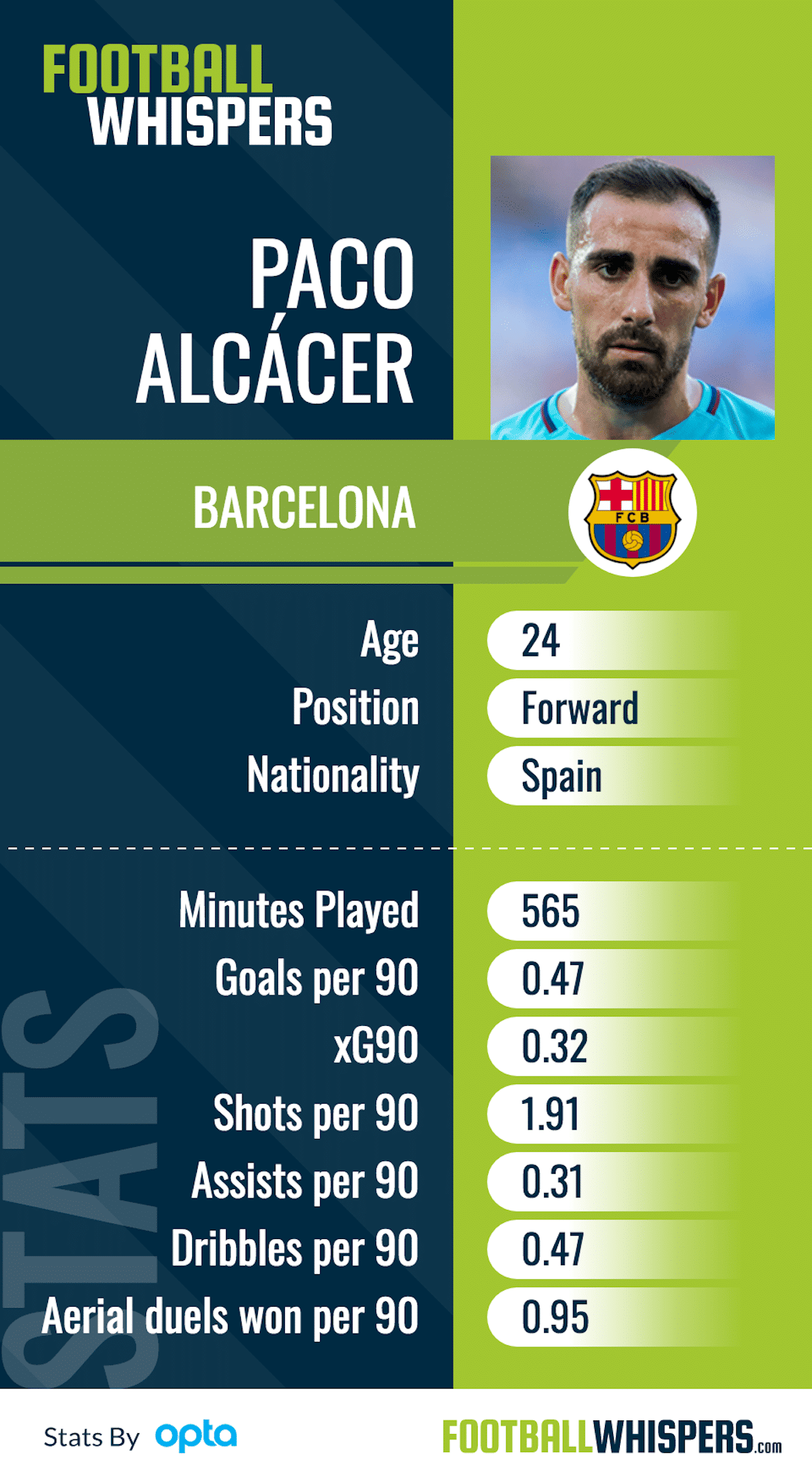 The question surrounding any possible move from Barcelona to Southampton for Alcácer shouldn’t be based around whether or not the club should sign him, but rather whether they could.

If Hughes’ side avoid relegation and plan out a summer rebuild of the squad then Alcácer would undoubtedly be a remarkable improvement on the strikers available to Southampton at this moment in time.

However, just because Alcácer doesn’t play each week for Barcelona it doesn’t mean he or his club would be interested in selling him. And if they were tempted it would probably take something in the region of the €30million they spent on signing him in the first place – a club-record fee for the Saints.