The first game of the mid-week round in La Liga is scheduled for Tuesday and it is the Alaves vs Elche duel. So, check our preview of this game to learn more about it.

Our free Alaves vs Elche betting tips and picks

If you are looking for the best La Liga predictions, we can offer betting tips on all La Liga matches, including our favourite predictions for the Alaves vs Elche duel:

The win in Cadiz over the weekend helped Alaves climb up the standings a bit, but they are still in the relegation zone. Still, they shoved that they are ready to fight and that their win over Atletico Madrid wasn't just a one-time fluke. And while we didn't see the home team win in the last five head-to-head duels between Alaves and Elche, we feel it's time for that tradition to be broken. So, our prediction is for Alaves to win their second game in a row on Tuesday.

Alaves and Elche to Draw at Half Time

Although we expect Alaves to take three points from this game, we don't expect it to be easy. No, we expect a tough and close match, which will be decided in the second half. So, our prediction is for Alaves and Elche to draw at half time. After all, two of the last five meetings between these two teams have been even at half time, with two more seeing a goal scored in the last five minutes of the first half.

We did not see both teams score in the last five h2h duels between Alaves and Elche, so we don't expect to see it in their upcoming game either. In addition to this, both teams have scored in just 11% of all Alaves matches in the league so far, as well as 50% of all Elche games in La Liga this season.

The latest odds and important stats for Alaves vs Elche

If you want to place a bet on the best Alaves vs Elche odds, check our list of odds from the premier UK betting sites:

Alaves vs Elche preview: Can Alaves win two in a row?

After they managed to get their second win of the season during the weekend when they beat Cadiz away from home, Alaves will now try to get a second win in a row against Elche at home. The team has lost all other games this season, except for the win against Atletico Madrid, so they are still in the relegation zone, but at least they have climbed to the 18th place and have a chance to get out of it soon. Alaves has no injured players at the moment.

With two wins, four draws, and four losses in the first ten matches of the season, Elche is currently sitting in the 14th place in the standings, four points away from the first team in the relegation zone, their upcoming opponent Alaves. Elche has one win, one draw, and three losses in the last five league games, so they could use a good result to lift their spirits a bit. On a positive note, Elche's injury list is empty at the moment.

Frequent questions for Alaves vs Elche 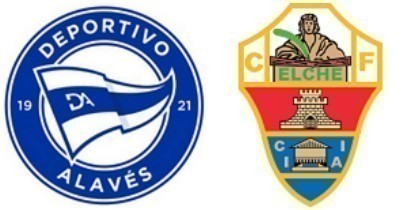