The striker can become a hero in an instant or a villain in a heartbeat and more often than not is the player we all dream of being when we are having a kick about in the street, park or for our local sides. Whether it’s the foraging “number 9,” whose job is to pounce on any potential opportunity that comes his way, thriving on any chance they can capitalise on, or maybe the more creative “10,” who is seen as the conductor or the hard-working provider for the front line – we all have our favourites both now and in the past.

As a young boy playing on any and every surface, Alan Shearer had a proclivity for playing in midfield as it allowed him to have more influence on the game. However, as he grew it became apparent that he was meant to play further forward.

Offered the chance to play with Southampton, he left Newcastle and moved to the opposite end of the country with the dream of making the grade. He would later to return to Newcastle, via a spell with Blackburn, to end an outstanding career.

A traditional, old-fashioned English centre forward, Shearer would earn renown not only for his goals, but for his celebrations, durability and loyalty. He left a marked impact on every club he played for and it is arguable that, following international retirement in 2000, he has never since been replaced by England.

If only given three words to describe Shearer’s method, ‘crash, bang, wallop’ would suffice. Many of his goals were memorable simply because of the sheer power of the strikes; goalkeepers were afraid and nets were billowed on a frequent basis whenever he was around.

Power was an integral element of his all-round game, too. A strong, physically robust centre forward with good aerial ability and a willingness to involve himself in the rougher aspects of the sport, Shearer was hard to shake off.

At his best he was direct, fast and single-minded, a threat from almost anywhere inside the opposition’s half due to the force and accuracy of his right foot, as well as his high levels of confidence. He could hold the ball up, bring others into play and run the channels, but he was truly at his best in and around the 18-yard box. 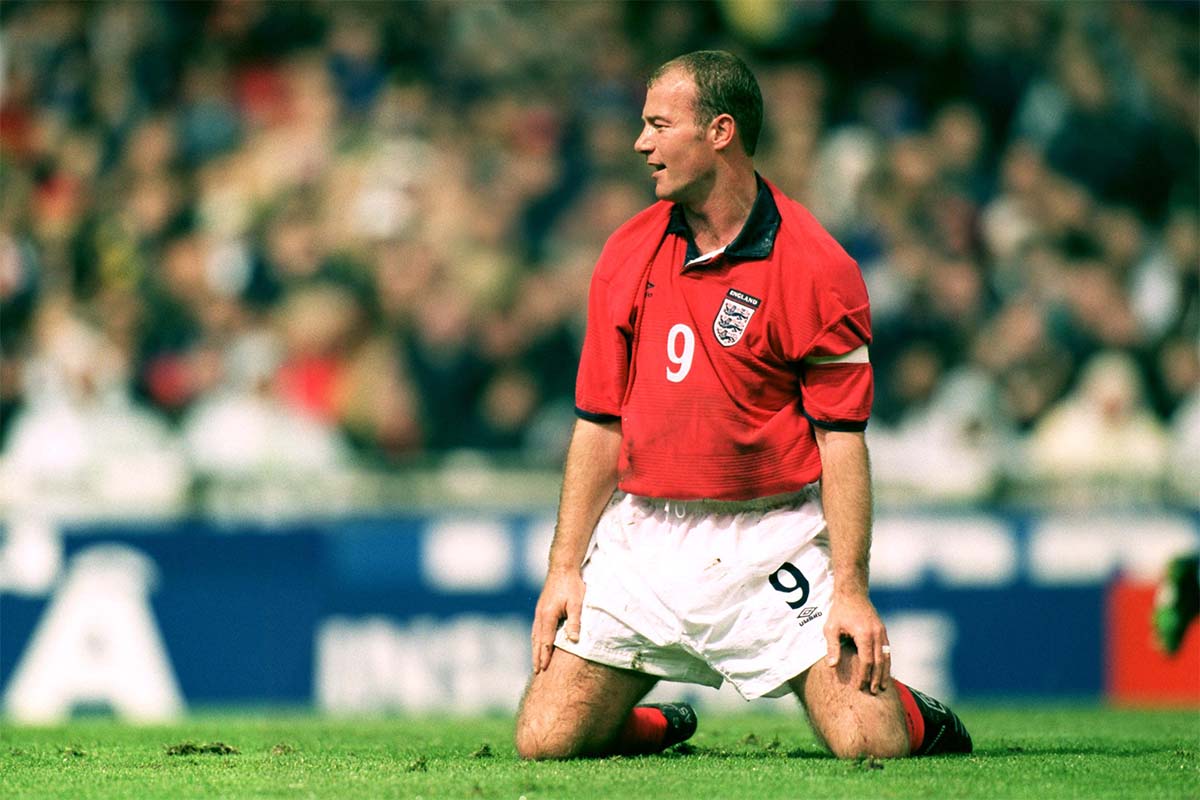 After a positive 1991-92 season with Southampton that saw him score 13 league goals Shearer moved to Blackburn for what was then an English transfer record-breaking fee of £3.6 million. He would suffer a cruciate ligament injury during his first year at Ewood Park, but not before he had hit a remarkable 22 goals in 26 games.

In 1993-94 he scored 31 times in 40 Premier League outings as Blackburn finished second behind Manchester United, but in the following year, bolstered by the arrival of Chris Sutton, he would go one better. Forming a devastating strike duet known as SAS, Shearer and Sutton led Blackburn to the title in 1995; the club’s first in over 80 years. That season was the most prolific of Shearer’s whole career, as he scored 34 goals in 42 league matches to finish as the Premier League’s top scorer.

While Blackburn would fail to retain their title, Shearer would retain his. He was the most lethal hitman in English football’s top tier in 1995-96 and 1996-97, though the latter he would achieve while at Newcastle.

Euro 96 saw Shearer become an international star after years of underwhelming for his country. Going into the tournament his record for England stood at five goals in 23 games, and he had failed to score for 12 consecutive international fixtures prior. But, striking up a working partnership with the more technical Teddy Sheringham, he scored in each of England’s three group games including a double in the sensational 4-1 romp over the Netherlands.

A goal in the painful semi-final loss to Germany ensured Shearer’s status as top scorer at the competition, and later that same summer he would break the world record transfer fee when signing for Newcastle for £15 million.

Back home his goals tally continued to swell. Just as he had done with Sutton at Blackburn and Sheringham for England, Shearer formed a supreme duet with the equally powerful Les Ferdinand as Newcastle pushed Manchester United in the race for the title.

While ultimately he never won a trophy with the Toon Army, Shearer would go down as a club legend for his goals and loyalty, staying as he did until the end of his career, turning down the financial riches and prestige of Manchester United in order to do so. In his 10 seasons with Newcastle, he scored 206 goals in 405 games, achieving an incredible rate of over one goal every two games despite of multiple injuries and a gradual decline in athleticism.

Amid the catalogue of typically Shearer goals, there is one that stands out as perhaps his defining strike. It was Sunday 1 December 2002 and Newcastle were 1-0 down at home to Everton. Resorting to a series of hopeful long balls, one from Laurent Robert found its way to Shearer after a header by Shola Ameobi. With no-one marking him on the edge of the penalty area, it would have been reasonable to take a touch, control and shoot. But Shearer skipped the first two steps.

Watching the ball closely, he angled his body perfectly to shape up for the first-time shot. And, as the ball dropped, Shearer unleashed a stunning right-footed volley beyond Richard Wright. The velocity of the shot was only matched by its technical proficiency; the net wept at the unadulterated wrath of the finish and Shearer went off to celebrate his equaliser with his adoring public.

“I could have taken another 500 of them and not hit [them] in that position, and not hit it as sweet as that,” he later admitted. “It was just one of those days where I caught it perfectly … it was just a great feeling.”

Shearer was by no means the most refined of strikers; indeed he almost seemed to take pride in his lack of finesse at times, such was his use of physique to outmuscle and outmanoeuvre opponents. But his combination of brawn and attacking intelligence ensured that, even as he lost his athleticism in the later stages of his career, he remained a tantalising goal threat.

For those fortunate enough to grow up watching the Premier League in the 1990s and early 2000s, Shearer left a genuine imprint through his collection of wonderful hits. Those goals, as well as the one-arm salute celebration that always followed, were seared into the collective consciousness of English football fans at the time.