Brendan Rodgers has made a habit of raiding former clubs for players he trusts. So far, however, he’s refrained from pillaging Celtic.

The Leicester City boss has brought in a number of backroom staff from north of the border but he’s yet to make a big-money move for a player. That could soon change.

According to reports, the Foxes are interested in Kristoffer Ajer. A deal for the 21-year-old was struck prior to Rodgers’ appointment at Parkhead but the Norweigan didn’t arrive in Scotland until after the former Liverpool boss was at the helm.

After an initial loan with Kilmarnock during the 2016/17 campaign, the ex-Start youngster went on to become a key part of the Carnlough-born tactician’s first-team plans.

Over the course of the next two seasons, Ajer went on to make 79 appearances for the Scottish champions, with the majority of those coming under Rodgers. He’s already appeared in 24 matches this term and he’s managed to form an impressive partnership alongside summer signing Christopher Jullien.

The Bhoys boast the meanest defence in the Scottish Premiership. In their 13 matches this term, Celtic have been breached on just seven occasions. They’ve also conceded just three goals in their four Europa League ties and have qualified with two games to spare.

Ajer has started all of the matches in Europe.

The Norway international is no stranger to clubs showing an interest in him. Tipped to be the next big thing as a youngster, he was perpetually linked with a move to one of Europe's big clubs. But Celtic came calling and bagged themselves a bargain, parting with just £650,000 to land the teenage starlet.

Should he now leave, the fee being mooted by the press is £20million, although that could well rise if other clubs make their interest a little more concrete. A number of Premier League sides have been linked with Ajer in the past and the going rate for a ball-playing centre-back has steadily been increasing.

Leicester know this all too well having sold Harry Maguire to Manchester United for £80million. Manchester City, meanwhile, are believed to be interested in Maguire's replacement, Çağlar Söyüncü. But they're likely to baulk at the club's valuation.

Söyüncü has struck up quite the partnership with Jonny Evans this season and Rodgers' side currently have the best defensive record in the Premier League having conceded just eight times in their 13 matches. For context, no other team in the English top-flight has conceded fewer than 11 goals.

And while the current partnership is the envy of most of the teams in the league, Evans turns 32 in January. A potential long-term successor to the former Manchester United man is Filip Benković. Leicester signed him for £13million during the summer of 2018 and sent him on loan to Celtic where he spent the 2018/19 campaign.

He's yet to make his debut for the Foxes, however, and interest in Ajer would suggest those at the King Power Stadium aren't entirely convinced with the 22-year-old. Or, perhaps, they're laying the groundwork for Söyüncü's departure down the line.

Getting players in to familiarise themselves with the team without the pressure of first-team football often works. Leicester did just that with the Turkey international and their long-term planning paid off.

A couple of years back, spending £20million on a player from the Scottish Premiership would've been laughed at. But the quality of player on offer has improved. Moussa Dembélé is starring for Lyon and is regularly linked with a move to one of the big six in England. Kieran Tierney moved to Arsenal in the summer for £25million while Odsonne Édouard is reportedly a £30million target for a number of clubs.

If Ajer develops as expected, the 6ft 5ins behemoth could be worth treble the £20million fee in a year or two. Though he's far from the finished product, he does seem readymade for the Premier League.

He's physically imposing, covers the ground well and is comfortable operating in the channel. But the biggest positive is his use of the ball and his composure when in possession. In the frantic and frenetic Premier League, a calm approach can go a long way. 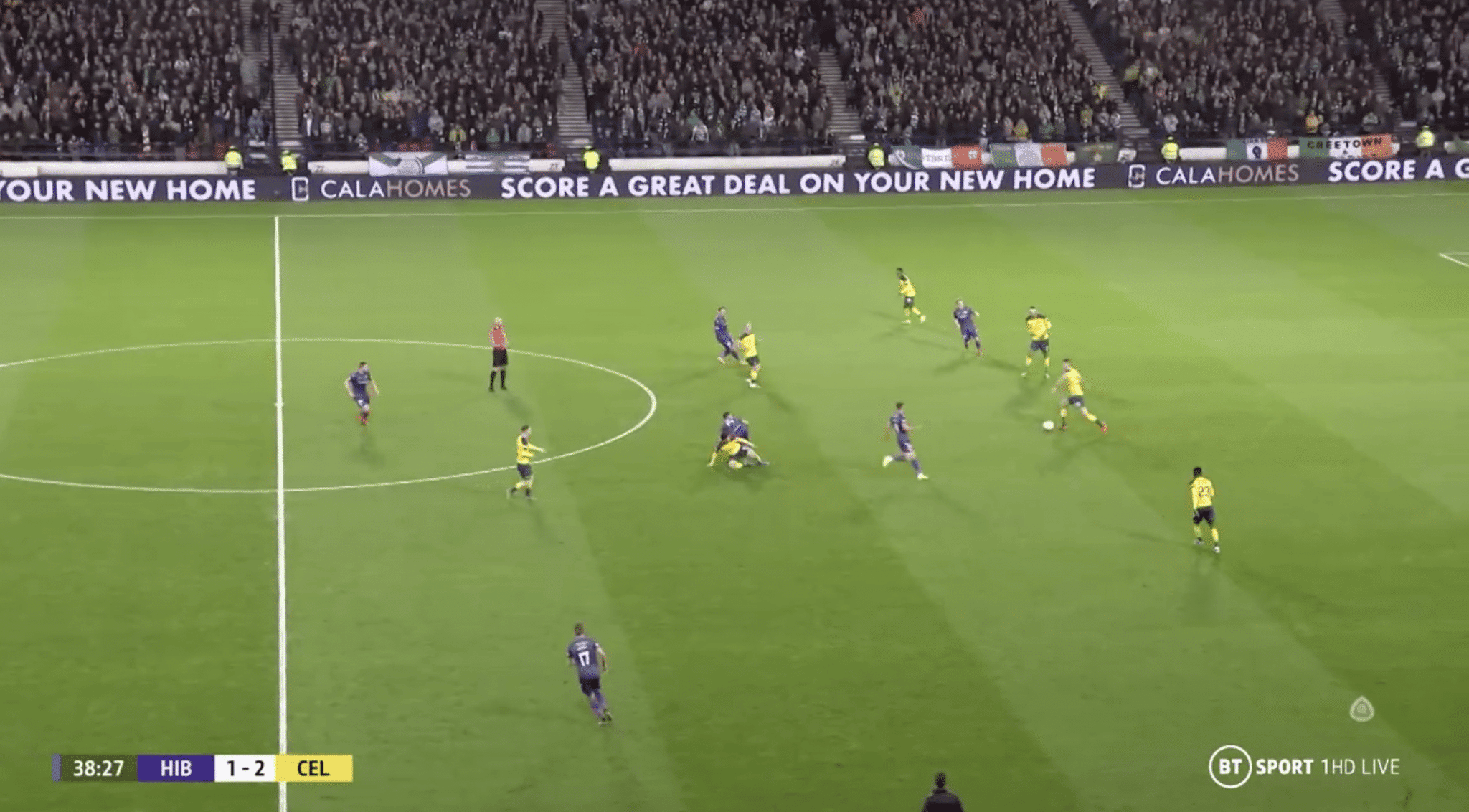 In the still above, Celtic have halted Hibernian's intrusion into their half and Ajer has stepped up to take ownership of the ball. Despite being in possession, the hosts are in a good position to counter-press and perhaps create a goalscoring opportunity.

In this sort of situation, other defenders would pass to the full-back, the man spare, or perhaps punt the ball long. But Ajer isn't flustered. 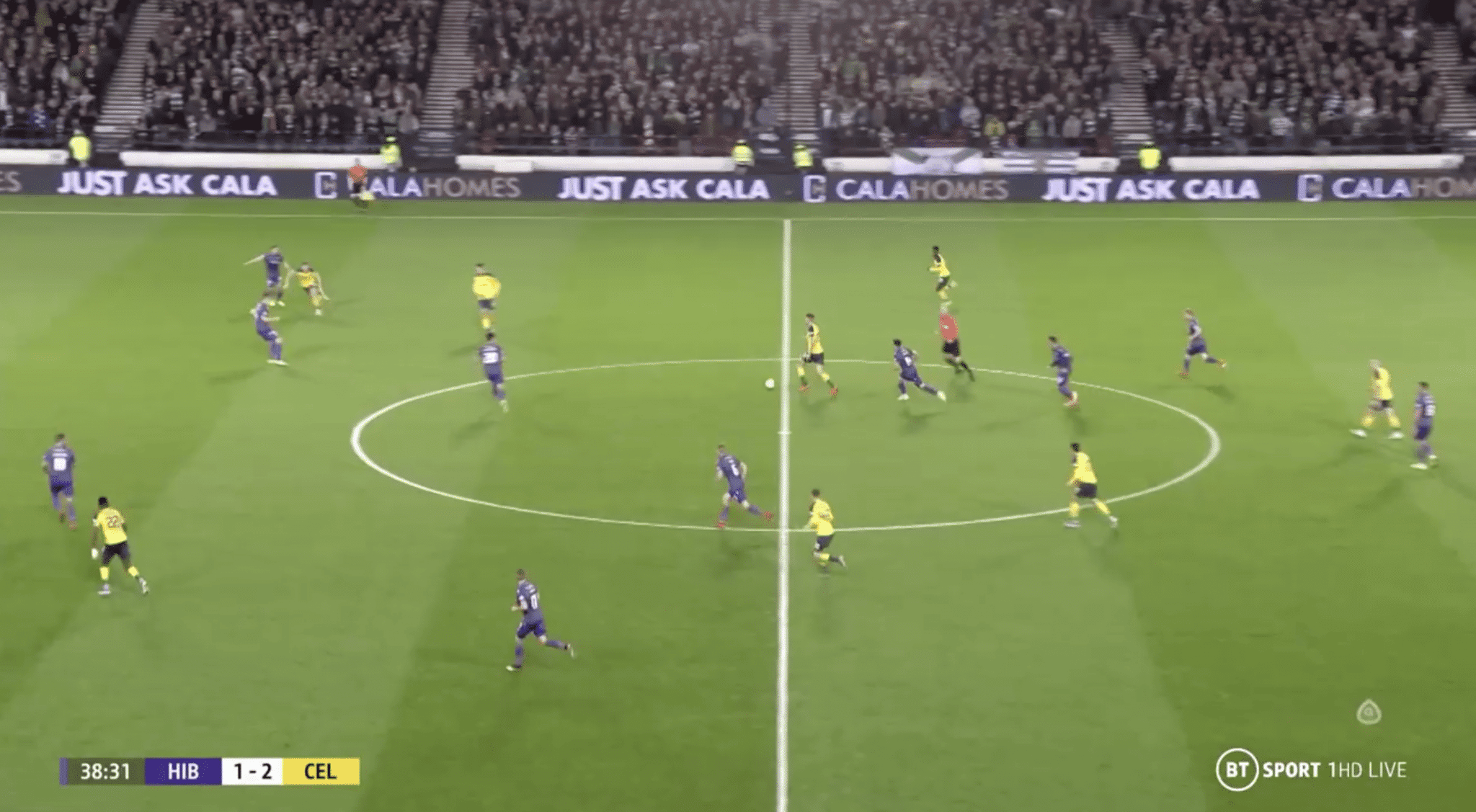 Instead, he carries the ball past the Hibs players in a central area. He slaloms his way beyond them and breaks into the opposition's half.

Ajer then looks to thread a ball through into the space behind the defence but it is intercepted. However, the takeaway from this is that he's comfortable pushing on with the ball and he has the vision to spot those potentially defence-splitting passes.

He'd not look out of place in the Leicester team. In fact, he could prove to be one of the shrewdest signings of the Rodgers era with the Foxes.