Considering the somewhat bittersweet departure with Manchester United following their FA Cup win over Crystal Palace, it might be nice for Louis Van Gaal to reminisce about one of the greatest teams in the history of football.

From Edwin Van der Sar to Jari Litmanen, the Ajax 1995-96 squad was packed to the brim with talent, and they used their famous 3-4-3 formation to sweep aside all comers as they fought to the final of the European Cup in back to back seasons.

In 1995, Ajax had so much young talent there was no way they wouldn’t end up competing for the biggest prize of all. The squad consisted of some of the greatest players of the era, although most were unknown youth team players when the season started.

It was hardly surprising that they ended up winning the World Soccer ‘Team of the Year’ award in 1995, but the accolades alone hardly do them justice. They won both the Champions League and the ill-fated Intercontinental Cup that season, and it marked their last major success in European competition.

They were pitted against AC Milan in Vienna, and the odds were stacked heavily against the Dutch side. Milan were in the final for the third consecutive season, and they were aiming to match Real Madrid’s record which stood at six wins. An 85th minute strike from Patrick Kluivert proved to be the winner, marking a historic win that has cast a long shadow over the team in future seasons.

It’s over twenty years since the Ajax team were broken up, and they’re still revered as a perfect example of how to run a successful football club. A golden generation of players were brought through at little to no cost, forming a nucleus that allowed for expansive play in their famous style.

The squad were well-versed in Total Football, which meant that every player would try each position to allow for versatility and maximized potential. (Just think of how Daley Blind seems to be able to play anywhere, or how Dennis Bergkamp could be just as effective as a playmaker or a striker.) 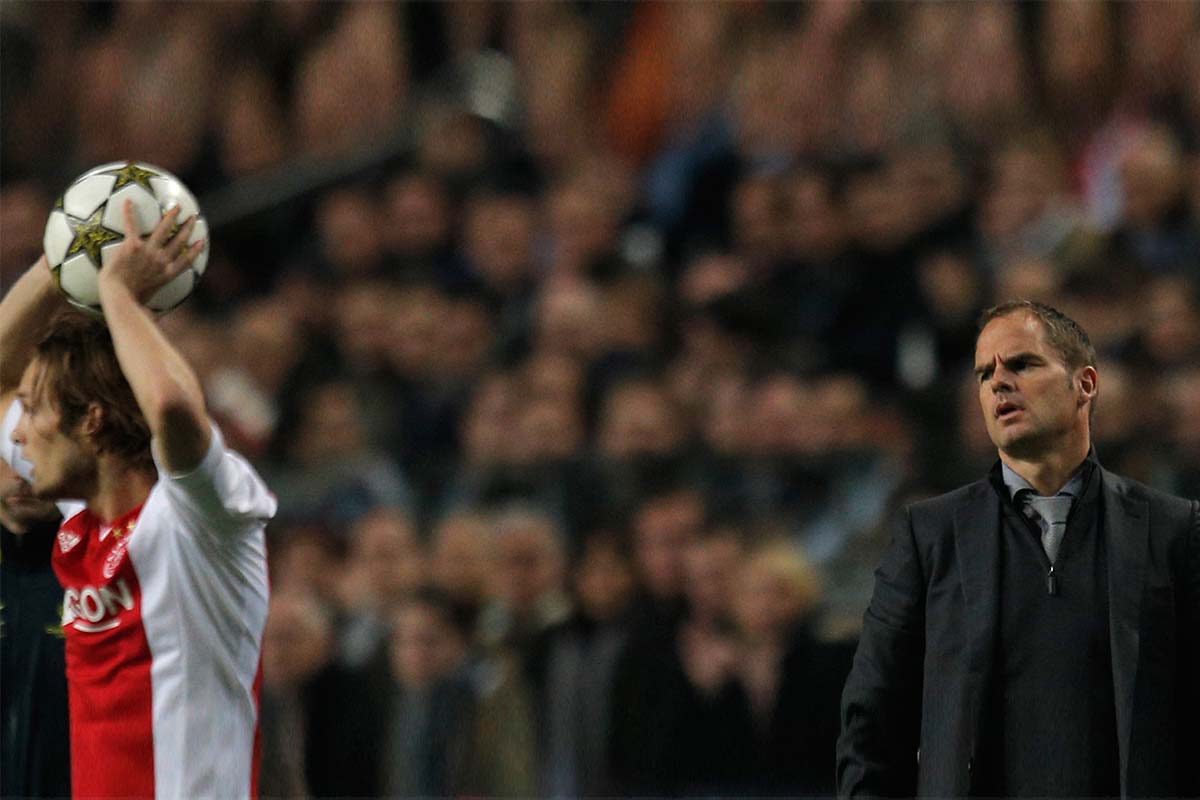 Blind and Bergkamp have both spoken about how playing and training like this helped them in their later careers. Here’s a quote from Blind in an interview for MUTV:

“Back at Ajax I used to switch a couple of times during games and I tried to always learn what was needed for each position. It’s now a bit easier for me to switch really quickly in my mind for the different positions so I know what to do where. I think that’s important.”

It gives the former Ajax players an edge, which allows for more tactical flexibility. From youth level, every team played in the 3-4-3 formation to allow for slick movement and pressing, while every player was interchangeable during transitional periods.

It allowed the younger members of the squad to slot in with little to no fuss, and it culminated in a team that had a complete understanding of what they should be doing, as well as an innate trust and bond formed during the time they spent together.

The squad achieved greatness, but they were soon pilfered by some of the larger names in European football. Edgar Davids went to Milan in 1996, while both of the de Boer brothers eventually moved to Barcelona (along with Litmanen and their manager.) Marc Overmars moved to Arsenal via Inter in 1997, while Nwankwo Kanu and Patrick Kluivert moved abroad to Inter and AC Milan respectively.

Frank Rijkaard announced that the final would be his last game, while his defensive partner Danny Blind retired in 1999. The team were shorn of their best talent in following seasons, although they still managed to reach the Champions League Final once again just a year after their triumph in the competition.

They were put to the sword by a Juventus side led by Gianluca Vialli and Alessandro Del Piero after the teams couldn’t be separated in extra time. The score ended 1-1, and a disastrous penalty shootout handed the Old Lady a famous win in Rome.

Of the first team, Edgar Davids was the final player from the team to hang up his boots, (and glasses) ending a storied career with a number of red cards while he managed and coached Barnet FC from 2012-14.

Van Gaal left for Barcelona in 1997 and it led to a period in the international wilderness for Ajax, and to some extent they’re still lost in the undergrowth. They haven’t got further than the groups in the Champions League for over a decade, while the Europa League has also been an unhappy hunting ground for travelling parties wearing the famous red and white shirt.

In modern times, Ajax is a shell of the team that took the world by storm two decades ago, and it’ll be a long time before they’re able to make Dutch football relevant once again.

The player’s may have retired, but what about their iconic manager? Following the news of Jose Mourinho’s appointment at Manchester United, it’s fairly obvious the club had been in talks with the former Chelsea boss for some time.

It must have been hard to take for van Gaal considering his media persona, but there was a sign of humility when he confirmed that the Manchester United job would be his last because he’s getting old, and his family are the ones who deserve his attention.

It can be tough to call time on a storied career, but the legendary manager couldn’t replicate his past success, and the players seemed to discard his so called philosophy if reports that have since surfaced are to be believed.

It’s said that Ashley Young was:

“Bemused and mildly horrified earlier this year to be informed he was being given a new role as a back-up centre-forward”, while the blooding of youthful talent wasn’t enough to sate the hunger of the supporters. The contrast between Blind and Young is telling, but maybe it was too late for Young to adapt even further given his previous forays at left back at the behest of his manager.

For anyone over a certain age, Ajax brings up memories of historical quality, but how can they compete in the modern game? If the club want to replicate their former success, they should try and heed the advice of Frank de Boer, who recently called time on a six-year stint as manager:

“The philosophy at the club has never changed. Our goal is always to get 60 or possibly 70 per cent of our youth players in the first-team. It is also our goal for the future so we can survive and be a rich club, I think.”

“The problem right now is that we have to sell our players when they are 22-years-old, maybe 24 at the oldest. In our day it was 29 when you moved on from Ajax. Today is different. At 22, you are not fully developed yet, you don’t have the growth and experience that you do six years later.”

Therein lies part of the problem. Their goal to play in a certain way, and their reliance on youth means they’re never going to be able to handle their best players being cherry-picked by larger teams across the continent.

As they don’t seem willing to adapt, it’s likely they’ll continue to be stuck in a loop of selling their best players, while failing to compete in Europe. Even if another golden generation were to come through in the near future, how long would they be willing to stay at Ajax when the Barcelona’s of the world start circling?

On the other hand, their commitment to local talent and tactical consistency is commendable, even if it hasn’t been able to produce results comparable to the best achievements in their history.