Before Paris Saint-Germain changed the landscape of Ligue 1, winning the last four titles, it was a country of unpredictability, with four different winners from 2009 to 2012. That came off the back of Olympique Lyonnais domination. Winning seven straight league titles, something the Parisians can only dream of at the moment.

Before that, Marseille actually won five straight – the 1992/93 title was later stripped from them do to match fixing – before the league enjoyed five different winners over seven seasons. In 1996 it was the unfancied AJ Auxerre that lifted Le Championnat, guided by France’s answer to Sir Alex Ferguson, Guy Roux.

It was a league littered with big stars. Sonny Anderson scored 21 goals for AS Monaco, Sylvain Wiltord was impressing for Stade Rennais and PSG had the likes of Raí and Youri Djorkaeff, however, it wasn’t enough to stop little AJA. Only two players in their squad scored more than 10 league goals, emphasising that the success was more based on teamwork, a togetherness and the legendary man-management from Roux. 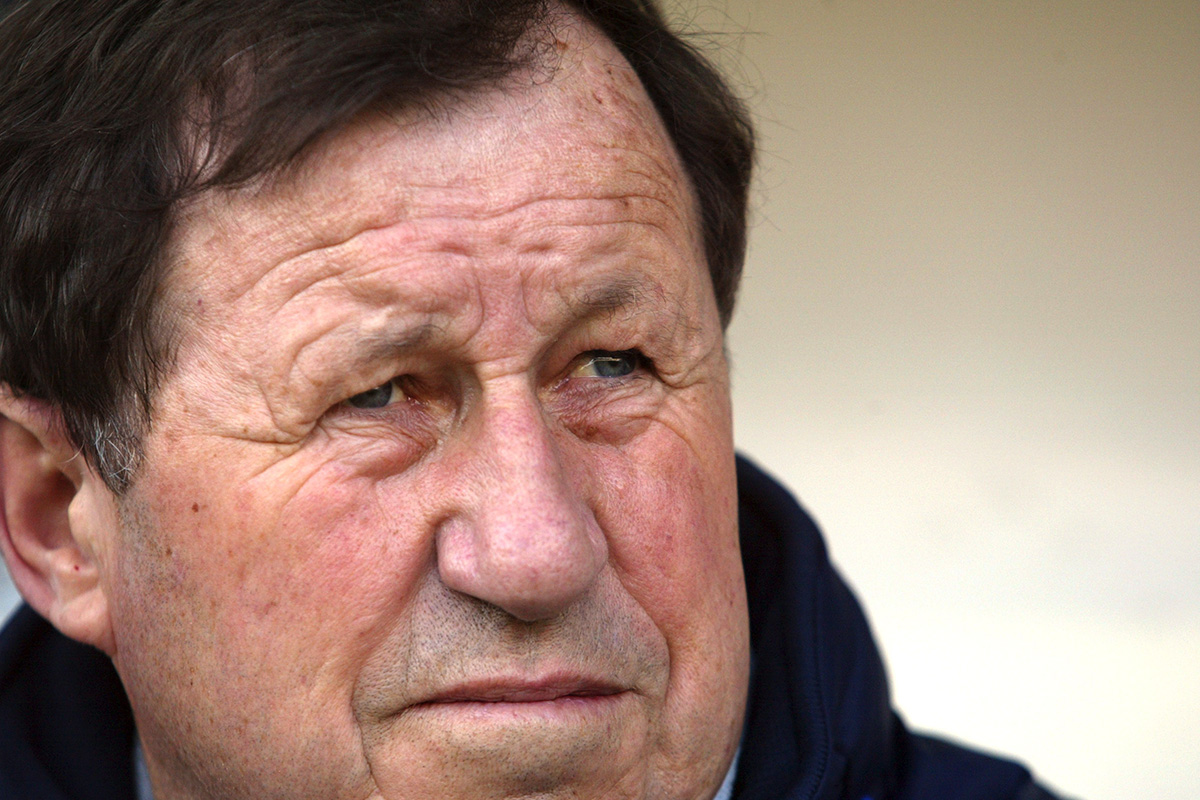 In what was actually his second of three spells at the club, he stated in charge for an unprecedented 36 years, from 1964 to 2000. His introduction to the club was as bizarre as they come. He arrived at the club in 1961 to play in a friendly against Crewe Alexandra. With the English side struggling with injuries, they were looking for a translator to ask Auxerre to loan them some players. Roux stepped in, played against the French side and President Jean Garnault offered to sign him up. Roux wanted to be player/coach but Garnault was reluctant due to his lack of experience.

The future coach would lay out a six-page letter of his ideas of how to run the club and manage the team, eventually they accept due to the fact he is the cheapest option available. Roux had to briefly leave his position at the club to undertake his military service, but returns in 1964 and begins to build the team that would win the league title 32 years later.

Six years after taking up the position, they won promotion to the third division from the regional competition. After winning promotions in 1974 and 1980, they were finally in the top flight. Their first trophy was the Coupe de France in 1994, beating Montpellier 3-0 at the Parc des Princes.

Going into the 1995/96 season, Roux’s side had to find a way to close the 10-point gap from FC Nantes. Changes were made, Raphael Guerreiro, Patrick Vahirua and Gerald Baticle all left and in came Laurent Blanc, Abdelhafid Tasfaout and Stéphane Guivarc’h.

It wasn’t a classic season by any means, with Auxerre losing 10 out of 38 games, PSG, Monaco, Metz and Lens all lost fewer games, but no one picked up as many victories as the Burgundy club. They avoided draws, just six all season, with the three teams below them all drawing 11. No one scored more goals, with 66 and only Metz conceded the same. It was a perfect storm.

Key to the win was the ability to spread the goals around the game, keep a consistent side and not lose points to their rivals. At home they lost to Guingamp, Lille, Lens and Monaco, but won away at Metz, Nantes and PSG. The Parisians led the table from week five to 11, then from week 16 to 33. PSG lost 3-2 to Metz and doubles from Corentin Martins and Sabri Lamouchi fired them past Lille 4-0 to take them into the lead, which they would hold until the last day.

Martins would score 13 goals in all competitions from midfield. His style, ability and class on the pitch would see him likened to the great Michel Platini, although Coco wouldn’t quite reach the same level. He would only win 14 caps from Les Bleus and a failed spell at Deportivo in Spain saw him return to France with Strasbourg in 1998. After retiring, the classy midfielder would try his hand at management at Stade Brestois and later as the national team manager of Mauritania. 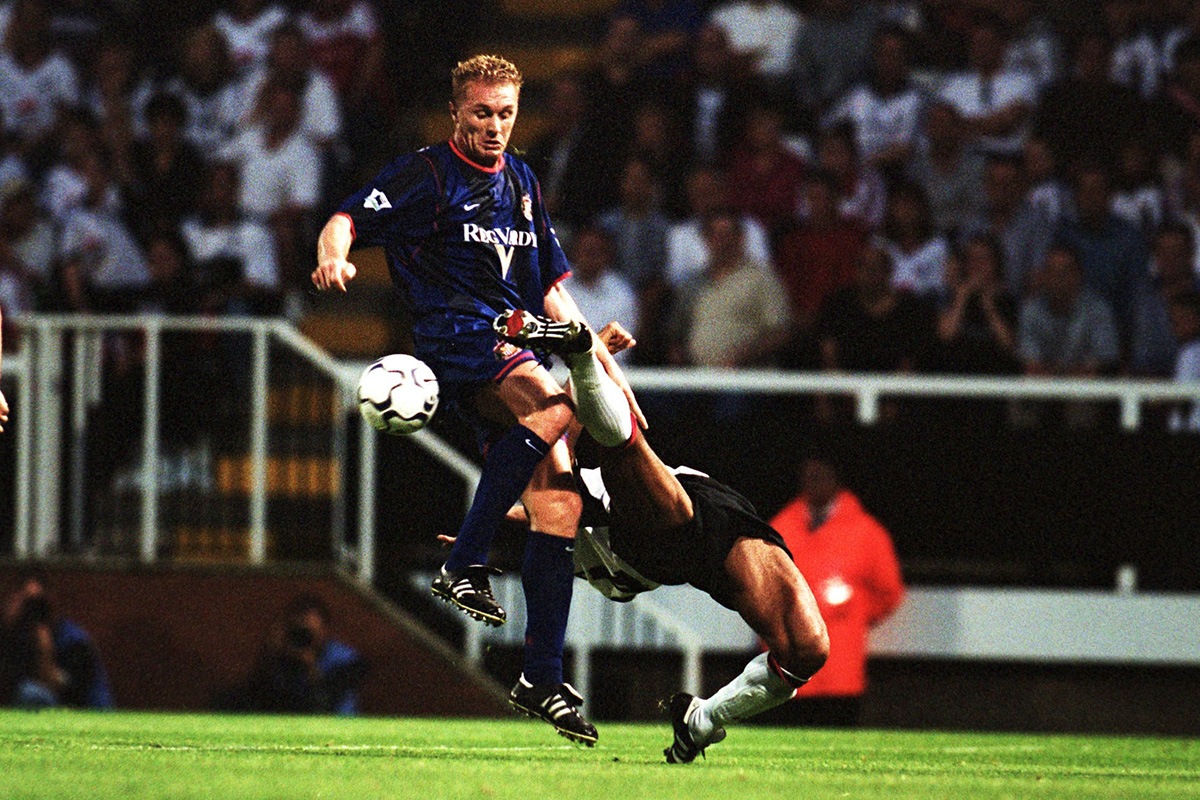 Auxerre’s top scorer that season was formidable forward Lilian Laslandes. He would later be remembered by Sunderland fans for going goalless in 12 fixtures, but for Auxerre and then Girondins de Bordeaux, he will remain a legend.

His 12 goals during the title run was Auxerre’s best return, he added 10 the next season before moving to Bordeaux. There had scored 14, 15 and 14 goals in three league seasons. In 2008, after leaving OGC Nice, he signed up to play handball for Bordeaux HBC. Big, powerful and aggressive, he is known for his striking blonde hair and as well as winning the title with AJA, the striker lead FCGB to the 1999 league crown.

Notorious French striker Guivarc’h only managed three goals in 23 games that year – Newcastle United fans will not be shocked by that – but after a successful loan spell at Rennes he scored 21 times in 32 games going into the 1998 World Cup. Another 24 goals in two seasons followed once he returned to France. No one in Scotland or England will ever a believe the World Cup winner was ever known as a prolific goal-scorer.

France’s 1998 World Cup winning squad was littered with the success of AJ Auxerre. Liverpool fans will remember Bernard Diomede. The flying winger scored 27 goals in five seasons under Roux before moving to Anfield in 2000. His time in England wasn’t great, perhaps it could have been so much different. Playing against Sunderland, he scored a wonderful overhead kick, but although replays made it look like a legitimate goal, it was ruled to not have crossed the line. Would his time for the Reds been more fruitful had that gone in. We will never know.

Auxerre would reach the quarter-finals of the Champions League the following year. After beating Rangers and Ajax on their travels they would eventually fall to the winners, Borussia Dortmund, the German side winning 4-1 over two legs.

Sadly, after suffering relegation to Ligue 2 in 2012, the club are stuck in the lower half of the league with little chance of jumping back up anytime soon. However, the academy structure lives on, with Yaya Sanogo and Paul-Georges Ntep just two players to come through at the Stade de l’Abbe Deschamps. The glory days are long behind them, but the history and influence the club has over the French league is still strong throughout the country.