Sergio Agüero is undroppable. Ever since Pep Guardiola joined Manchester City, rumours of the Argentine's elimination from the teamsheet have rumbled, washing back into public consciousness at irregular but consistent intervals.

He is ‘only’ a goalscorer, the thinking went (or still goes); Guardiola, the general on the front-line in the midfielder-fication of football, wants someone with a more rounded skillset. But Agüero just keeps on scoring.

There were rumours that he’d be dropped against Huddersfield Town, too, but he played once more, scoring his 13th hat-trick for City.

“Pep is a very demanding coach and adapting to what he wanted was not easy during the first year,” Aguero told the Argentinian channel TyC at the end of last season.

“As well as my responsibilities as a striker, he wanted to get me involved as the first defender of the team … I think this season we were on the same page with Pep. He told me he was happy with my performance and his anger was worth it because I had a better year.”

In Guardiola’s first season in Manchester, the striker averaged 0.67 tackles and 0.14 interceptions per 90 minutes (in the bottom 20 percent and bottom five percent of strikers). Last season, those numbers were 0.41 and 0.36 per 90 (bottom ten percent and just outside of the bottom quarter of strikers in the league). 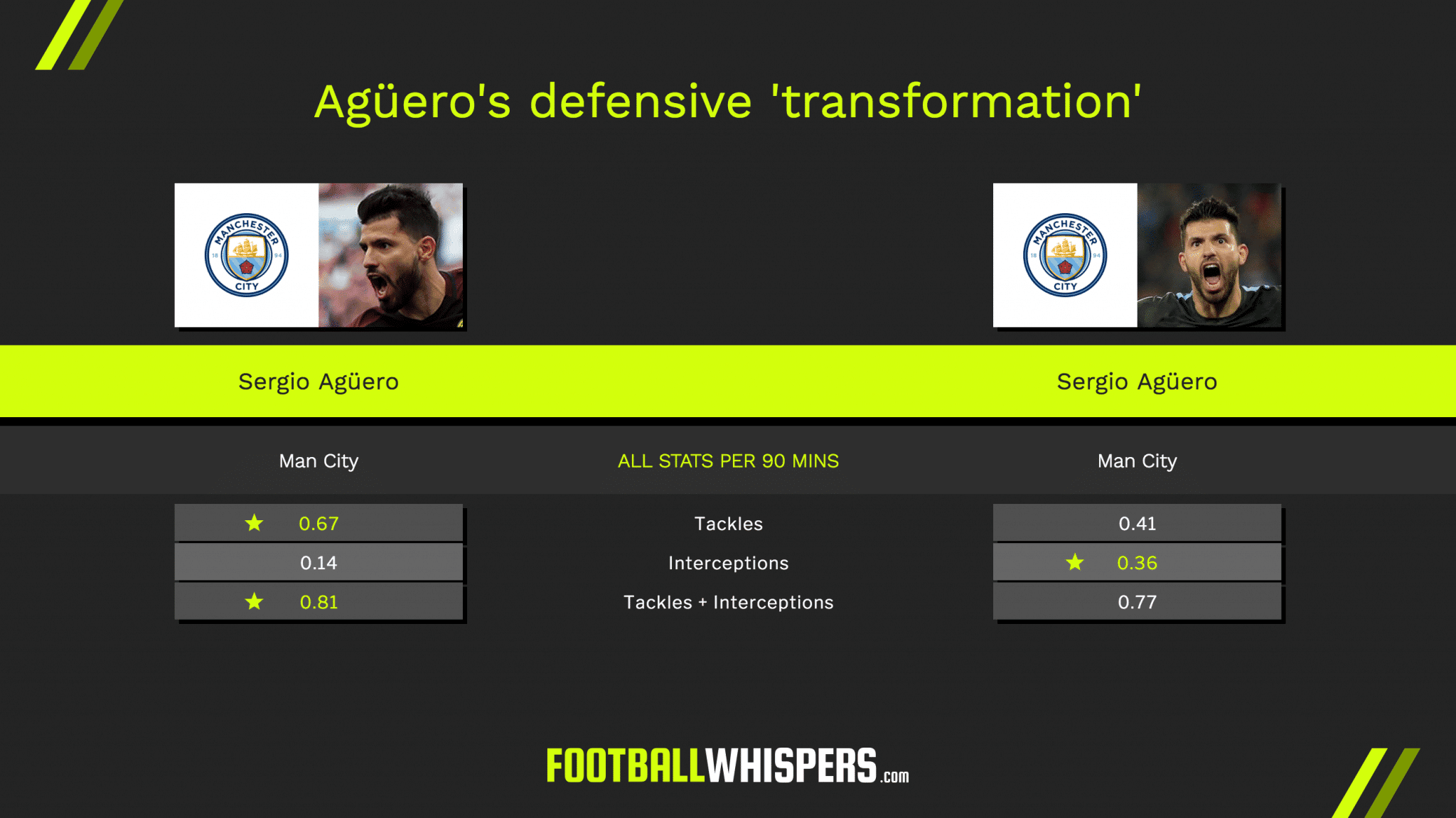 Tackle and interceptions numbers aren’t the be-all and end-all of defensive work-rate, of course, but they are something of an indication (not that we at Football Whispers are going to argue with Pep Guardiola).

With so many other players who are capable of linking up the play, though, perhaps Guardiola can afford to play a poacher up-front. Not that this is necessarily his preferred line-up. That might be to play the Argentine and the Brazilian Gabriel Jesus together.

“Both have different qualities – they deserve to play,” he said last season. “They have a lot of games and they have to be ready. It is the toughest decision.”

Why haven’t they played more often (just 12 times in their 19 months at the same club, in all competitions).

“When you have Mendy, he can play wide and the winger can go inside,” Guardiola explained. “Fabian Delph cannot do that. Without Mendy, Leroy Sane has to go wide, which is why they don't play together.”

Sure enough, exactly half of their starts together came in August and September last year, when Mendy was starting, as well as the first game after his injury (just three days hence, against Shakhtar Donetsk in the Champions League).

In the other six matches, there is something of a trend in the teams faced. Middlesbrough, West Bromwich Albion, and Watford towards the end of 2016/17; Wolverhampton Wanderers in the League Cup and Southampton in the league last season; and then Huddersfield in 2018/19. All teams who are likely to sit back and defend with an unusual acceptance, with several of them playing with a back three.

Guardiola spoke on Sky Sports’ Premier League launch about how Manchester City had been working on ways to break down deep defences, as they’d found that opponents often just put someone to man-mark Agüero.

Playing with two strikers gives opposing defenders much more to think, and worry, about, which can free up midfielders to progress the ball into dangerous areas, and it then gives City more of a presence in the box to get on the end of a final ball.

But, if playing with two up-front isn’t possible, it’s Agüero who gets the nod.

“He came back perfect. After surgery with the doctor, he feels free now,” Guardiola said after the 6-1 win over Huddersfield. “He suffered last year with some problems but his whole game – not just scoring goals but his passing and his assists… he never stops!

“When that happens, he is one of the best strikers in the world, without a doubt.”

And that is why Sergio Agüero has proved to be undroppable.