After a recent charity match that saw him wear Celtic colours, Gabby Agbonlahor discussed his excitement at the idea of playing for the Scottish champions.

“Every player if they had the chance to play for Celtic would take it,” he said.

“You would have to speak to Celtic and see if they are interested. If the opportunity comes…then I would certainly look at it.”

Currently a free agent following the expiration of his contract with Aston Villa in the summer, the 31-year-old is an experienced striker with caps for England and a big name. And, with Celtic failing to sign a replacement for Moussa Dembélé, who left for Lyon on transfer deadline day, the idea of signing Agbonlahor isn’t entirely far-fetched.

The club have spent an increasing amount of time shopping in the English market in recent years.

Since Brendan Rodgers took charge in 2016, 47.8 per cent of their signings have come from south of the border. This tally includes recent additions such as Filip Benković and Daniel Arzani. For context, in the three-year period prior to Rodgers’ appointment, just 37.5 per cent of the club’s signings came from this market.

Agbonlahor’s arrival would be in line with this recent modification of transfer policy, but there doesn’t appear to be an obvious place for the former Premier League speed merchant within Celtic’s current framework.

The Scottish giants’ need for strikers is blunted by Rodgers’ tactical preferences. In his first season at the club, he went mostly with a 4-2-3-1 or 3-4-2-1 system, using a strike partnership on just two occasions in 38 league games.

Last term he went with a two-man frontline four times in 38 Premiership matches. And, so far this season, he has used a strike duet once in four league outings, deploying Leigh Griffiths alongside Dembélé for the 1-0 win over Hamilton Academical.

To put Rodgers’ avoidance of the conventional strike partnership into further context, he has used this ploy from the start in just 8.8 per cent of his league matches while in charge of Celtic.

When taking into account the number of times he varies his system – as he did when successfully implementing a 3-2-4-1 shape for the 1-0 win over Rangers – this only underlines how much the tactician prefers a lone frontman.

Generally, Rodgers avoids an extra striker to help him field as many creative and attacking midfield players as possible within his system, with the ultimate aim of controlling the centre of the pitch and getting options between the opposition’s midfield and defensive lines.

With an abundance of these individuals to choose from, including Tom Rogic, Ryan Christie, Scott Sinclair, Lewis Morgan and loan signing Arzani, this focus is extremely unlikely to change in the near future.

Celtic will stick to one man up top for much of this season, and they have two good options to select from when filling the role. Griffiths has averaged over one goal every two games since joining the club midway through the 2013/14 season, and at 28 years of age is theoretically in his peak years.

Slightly ahead of him in the pecking order at present is Odsonne Édouard, who recently became the club’s record signing when agreeing to join permanently for a fee of around £9million.

Like Dembélé, Edouard is a French youth international, with caps and goals at Under-19, Under-18 and Under-17 level. However, he is considered by many to be an even brighter prospect than his former teammate. 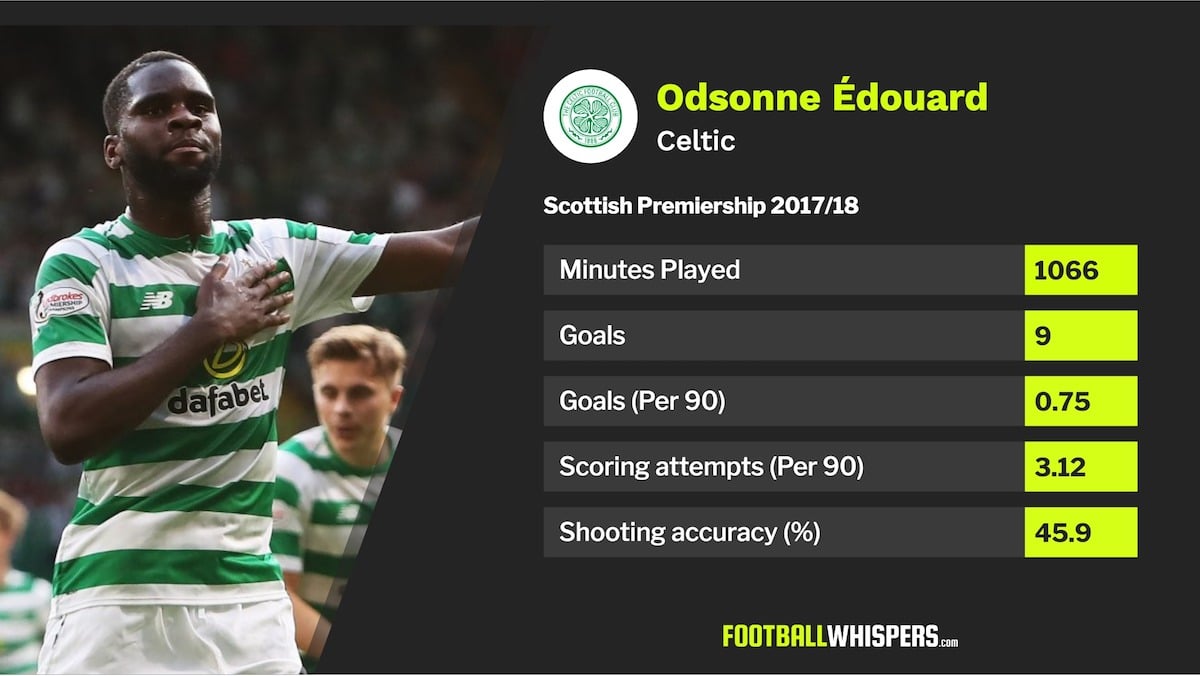 Even if Rodgers decides to rotate his options between domestic and continental competition, he would still have enough in his squad as it stands to play a different striker in league and Europa League action.

Celtic have alternatives, too. Were both Edouard and Griffiths injured, Sinclair, Rogic and James Forrest are capable of filling in as false or traditional No.9s. All three are aggressive dribblers, while the former and the latter also possess the required pace to break beyond defensive lines.

Mikey Johnston is also worth considering as a strike option. While viewed predominantly as a winger, he appears comfortable enough in tight spaces to play more centrally. And, if Rodgers were to break the mould and go with a front two, the youngster would be worth consideration as a second striker.

His performance in Scotland Under-21’s recent win over Andorra was so good that by half-time the opposition were doubling up on him. Despite the extra marker, he still made good use of his exceptional dribbling to cause problems.

The 19-year-old’s manager at club level appears to rate him highly – when discussing the player’s future in July, Rodgers stated: “He is very much in my plans.”

For Agbonlahor, joining Celtic would be a dream move at this stage in his career. Unfortunately for him, under the current circumstances Celtic don’t need to make this dream become a reality.