Moses Simon might not have been at the top of many Liverpool fans' wish list this summer but that shouldn’t detract from the fact he would be a shrewd signing if the Reds were able to complete the rumoured £10million deal.

Liverpool transfer target. Jürgen Klopp is in the market for a multifunctional wide forward and Simon fits the bill.

It could be described as something of an opportunistic deal, partly because he’s not been included in the World Cup squad due to an injury so would get a full pre-season with the Reds and, perhaps more importantly, the 22-year-old has just 12 months left on his deal with Gent.

With the Merseysiders needing to divert funds to other areas of the team, signing what will essentially be a fifth choice attacker for around the £10million mark isn’t the worst bit of business they’ll conclude all summer. Especially if it allows them to throw more money at Roma for Alisson or Atletico Madrid for Jan Oblak.

He’s no Ousmane Dembélé or Steven Bergwijn, both linked with moves to Anfield over recent weeks, and he might not ever reach the heights of those two players, but he might be perfect for what Liverpool actually needed – a player to supplement their talented forward line.

The more attacking players the better, but, unfortunately, this isn’t Football Manager. A compromise would’ve had to have been made and even though Dembele probably would’ve featured in 40 games for the Anfield club, a player of his quality would’ve perhaps demanded a starting position and it’s not something Liverpool could’ve guaranteed.

Likewise, someone like Bergwijn is a project a club has to invest in terms of patience and time spent nurturing them, both on and off of the pitch. Klopp’s the ideal manager to develop players but is the bench the best place for a talented 20-year-old? Probably not. 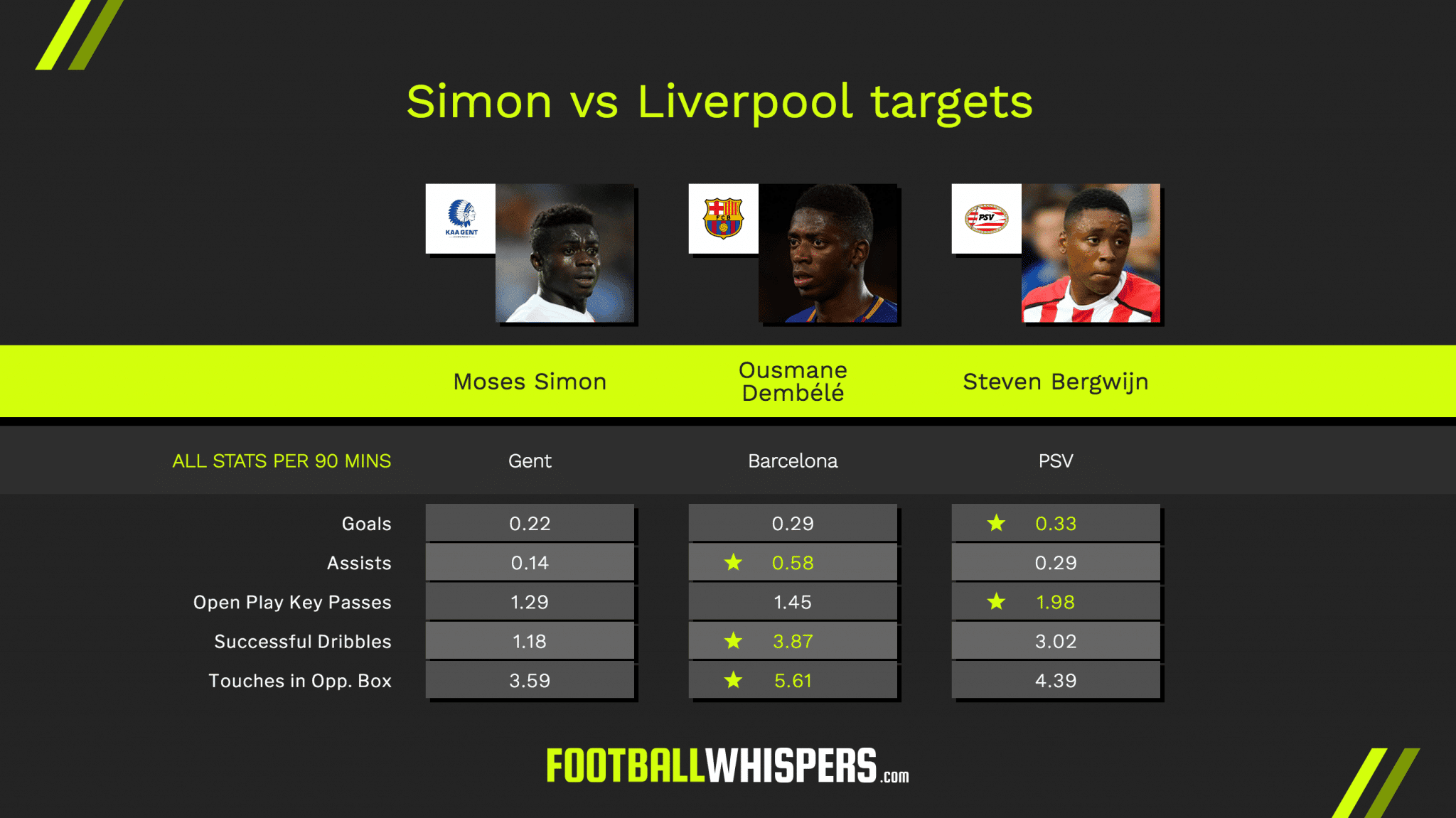 In Simon, however, Liverpool might have found an ideal fifth musketeer. There’s potential there for him to improve, he shares similarities with those linked but would arrive at a fraction of the price and he’s more than likely going to be content with his role as the man off the bench. He’s not in the same league as previous targets but he isn’t going to be when he’s costing a tenth of what Barcelona paid for Dembélé last summer.

The versatile Gent forward, who was at the Ajax academy for a period of time, adds much-needed pace to a forward line reliant on Sadio Mané and Mohamed Salah. It’s clear Nabil Fekir is still a top target, and if he arrives he’ll be ahead of Simon in the pecking order, but the Frenchman lacks the explosive pace that two of the three starting attackers possess at Anfield.

The Champions League final changed as soon as Salah was replaced. Liverpool had no players who could go through the gears others than the Senegalese speeder. It didn’t help things that Alex Oxlade-Chamberlain was ruled out, either. However, there’s no escaping from the fact that the opposition would effectively blunt the Reds by taking out one of the wide forwards.

They tried their best to hide it but couldn’t. Full-backs were reluctant to get close to Mané or Salah due to the fear of what would happen in the vacant space in behind them, but at the same time they didn’t want to stand off of the pair because they of the damage they do when given time.

As soon as Salah went off, Real Madrid grew into the game knowing full well Adam Lallana, as good as he is, simply didn’t pose a similar threat. The dynamic shifted and Liverpool weren’t as threatening, both mentally as well as physically.

Fekir is a creative force and the wildcard the Reds currently lack, but Liverpool would face similar issues if he was the long-term replacement if one of Mané or Salah were ruled out of a sustained period. He stretches the opposition but it’s rare to see him doing so with pace in behind. 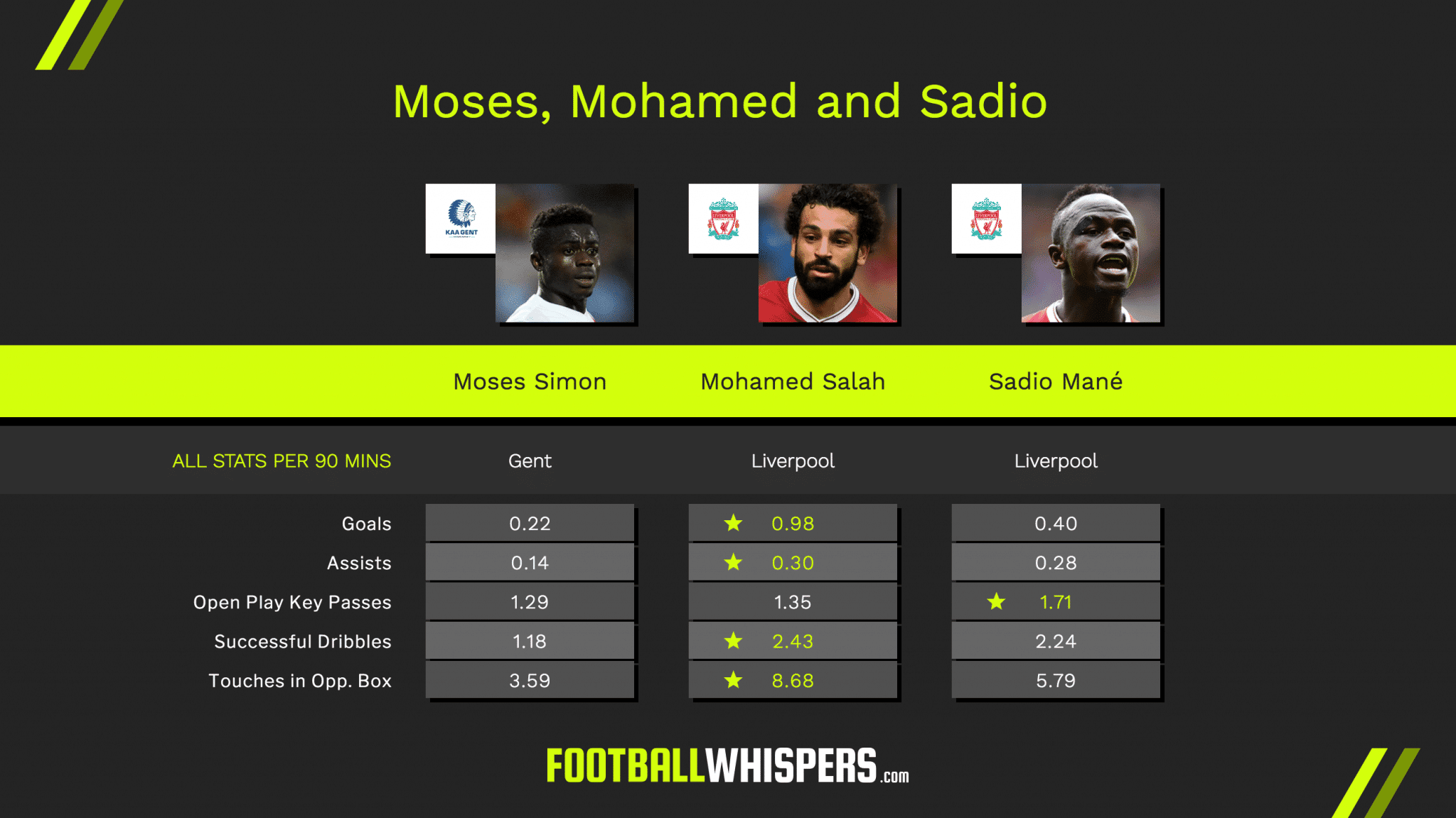 It’s safe to assume that along the likes of Mané, Salah and Roberto Firmino, Simon’s output will improve and that’s what’s going to be necessary if he’s going to fit in with this Liverpool side, because right now that’s what’s missing from his game. His final ball is lacking but everything else is there.

If Klopp can harness his ability then there’s a player there just waiting to be unleashed. It’s exactly the sort of picture his stats paint.

Simon primarily operates on the left wing. Like most wide forwards these days he likes to cut in onto his favoured right but he’s not averse to going on the outside and use his weaker foot to get the ball into the penalty area.

The best way to describe him would be as wriggly.

When in possession he doesn’t slalom past opponents like Lionel Messi or Salah, instead he seems to evade capture like he’s in a cartoon in the sense seeing him crawl through the legs of a player keeping tabs on him wouldn't be a surprise.

He often looks boxed off and out of ideas before, somehow, jinking his way past the man in a way which gives off the impression that it can’t be replicated. But he does it. Time and time again.

His former manager at the GBS Academy back in Nigeria, Ibrahim Ahmed, said it best: “He is just always doing something special, intimidating defenders and scoring fantastic goals. He doesn't only have acceleration and great pace but he is also a special talent because of his football intelligence.”

He petrifies the opposition with just how unpredictable he is and this, in turn, creates space for team-mates. He could well turn out to be another shrewd signing by those in charge of recruitment at Anfield. If he arrives, it’ll certainly be fun to watch him, Mané and Naby Keïta terrorise opponents on the left-hand side.