January’s transfer window already seems like a distant memory, with plans for the summer getting into full swing. Adrien Rabiot, the 21-year-old midfielder, has been continually catching the eye of Europe’s top clubs, with Arsenal and Tottenham Hotspur long-time admirers.

“If there are offers from big clubs, that obviously demands that they are considered,” the Frenchman told Europe1 at the weekend. “Clubs like Real Madrid, they are truly great clubs but, truly, the most important thing is the present and I am concentrating on what I am doing right now, that is the best thing to do.”

Since returning to the French capital and making his first-team debut aged 16, he’s fought and battled for his minutes, impressing at every turn, that was highlighted by his superb performance against Barcelona in the 4-0 UEFA Champions League victory.

“I am under contract until 2019 and I do not think I am in a rush. Honestly, I am not thinking about that.”

What does Adrien Rabiot bring? 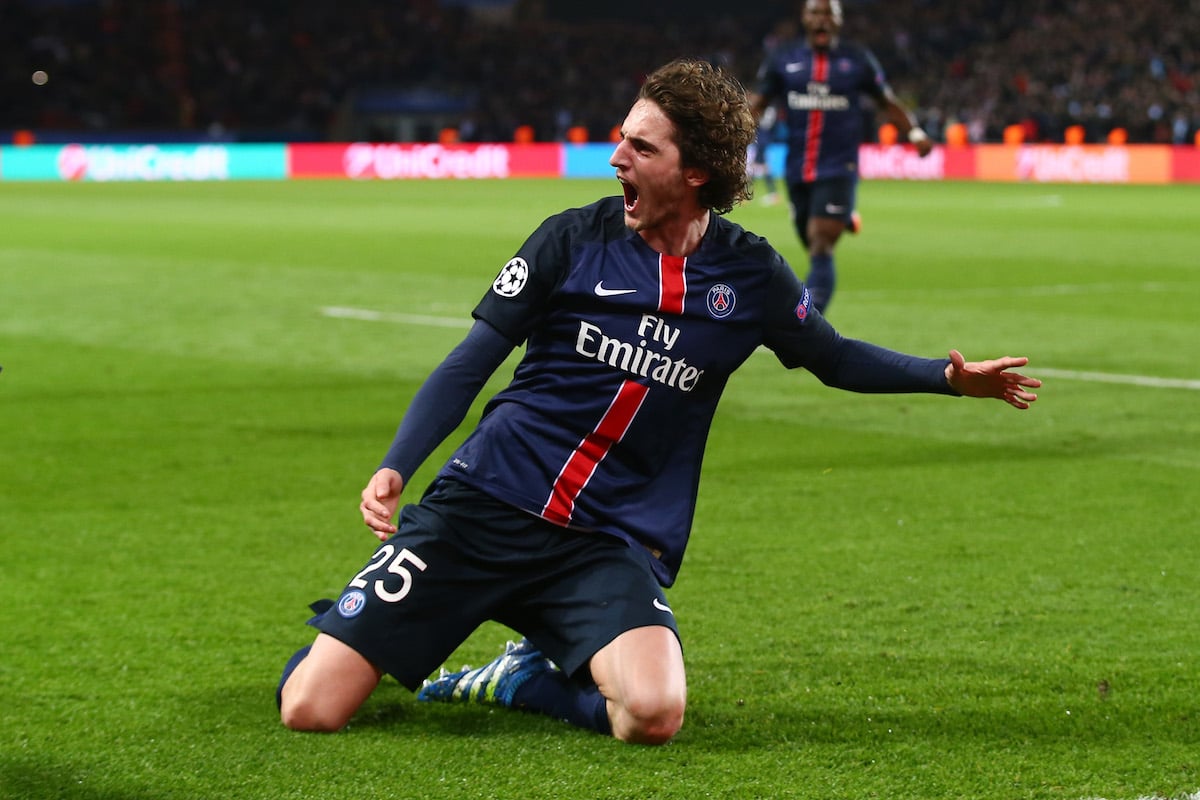 Rabiot isn’t the metronome of the PSG midfield, but he is given plenty of the ball. Marco Verratti and Thiago Motta are averaging over 100 passes per 90 minutes, but the local kid is still up at 78.8. In the Premier League, only five players – who have made more than 10 appearances make more passes per 90 minutes than Rabiot.

That puts him above Paul Pogba, Michael Carrick, Aaron Ramsey, Fernandinho and Mousa Dembélé. PSG’s style, keeping possession with ease, helps that number, but it’s still a great example of his talent.

Rabiot reads the game very well for someone so young. He can play as the deepest of the midfield three, but with his comfort on the ball, he can take up any position.

Always looking to spring on the break, as you can see in the graphic below, he is tracking the runs of the attackers, but moves to intercept and turn defence into attack. 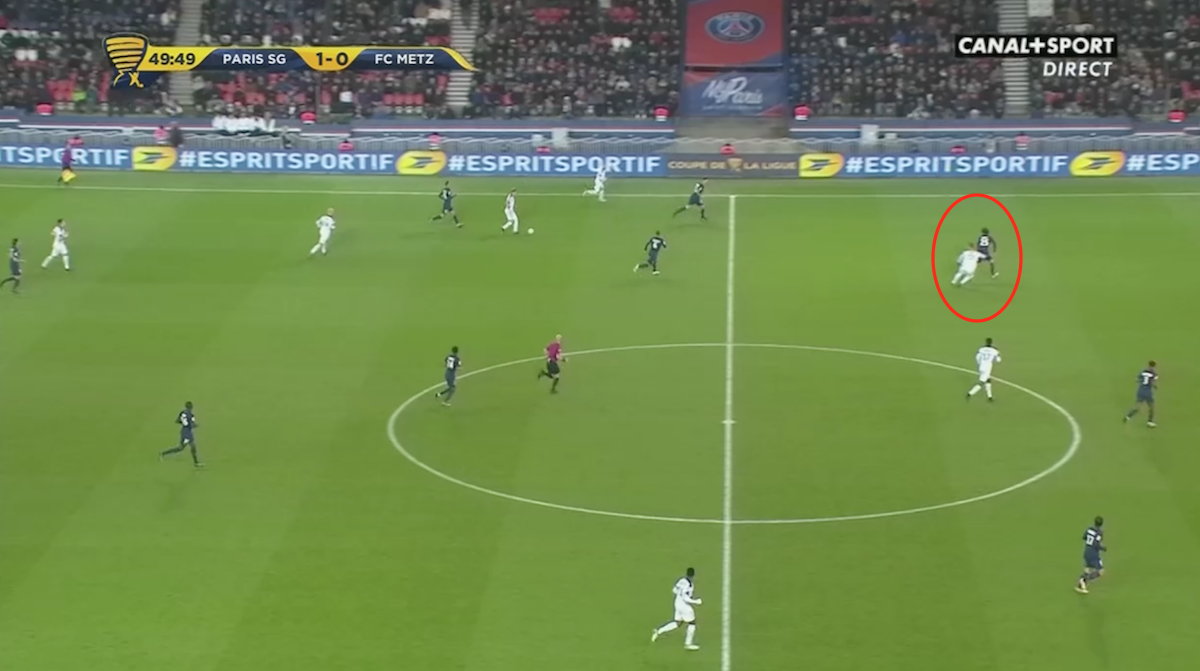 Using his long legs, the former Man City youngster races forward into the opposition half, then not satisfied with just giving the ball up to one of his attacking team-mates, he plays a superb forward pass to Thomas Meunier advancing down the right. 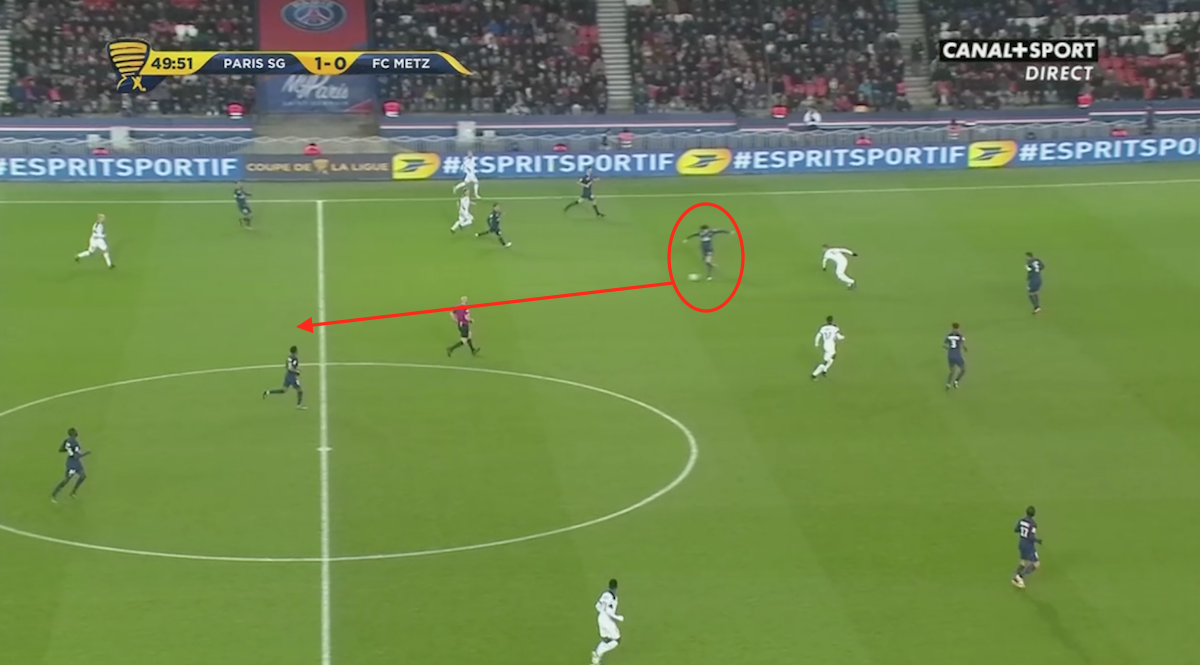 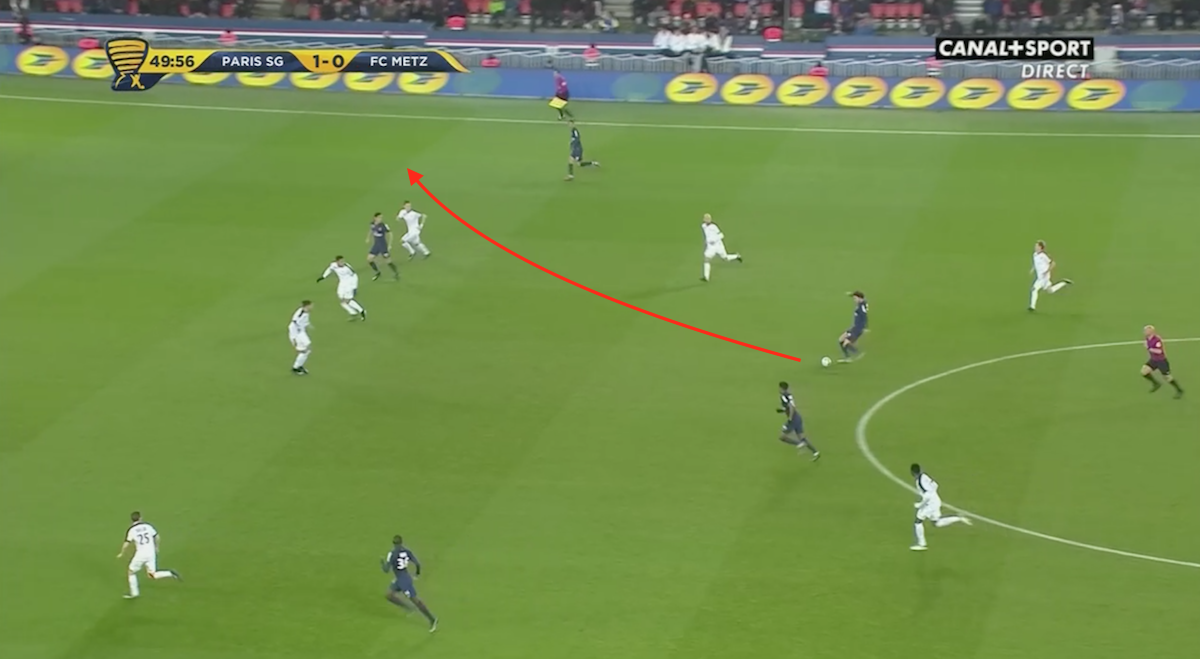 That’s a huge part of his game, his style, he can play the defensive role, but has the passing range and vision to open up the pitch with his measured left-foot.

Where he’d fit in the Arsenal midfield? 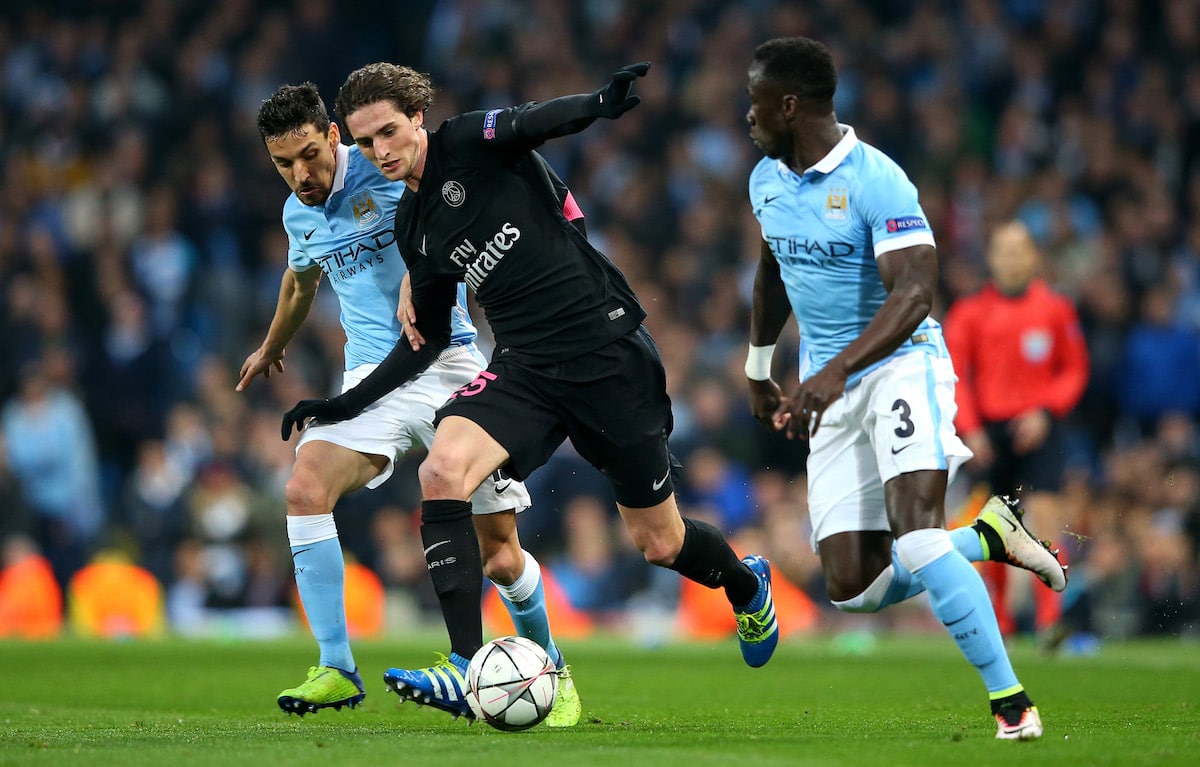 Granit Xhaka has still to finish his first campaign for the Gunners, but he’s far from convinced. At times, he’s shown a great range of passes – like Rabiot – but his aggressive, reckless side, has overshadowed those qualities.

Rabiot is a bridge between what the Swiss international brings and his partner, Francis Coquelin.

What he brings above both of them is an attacking dimension. Against Bayern, one of Arsenal best chances was to hit on the break.

Below, you can see the away side win the ball, but both central midfielders don’t try and join the counter. 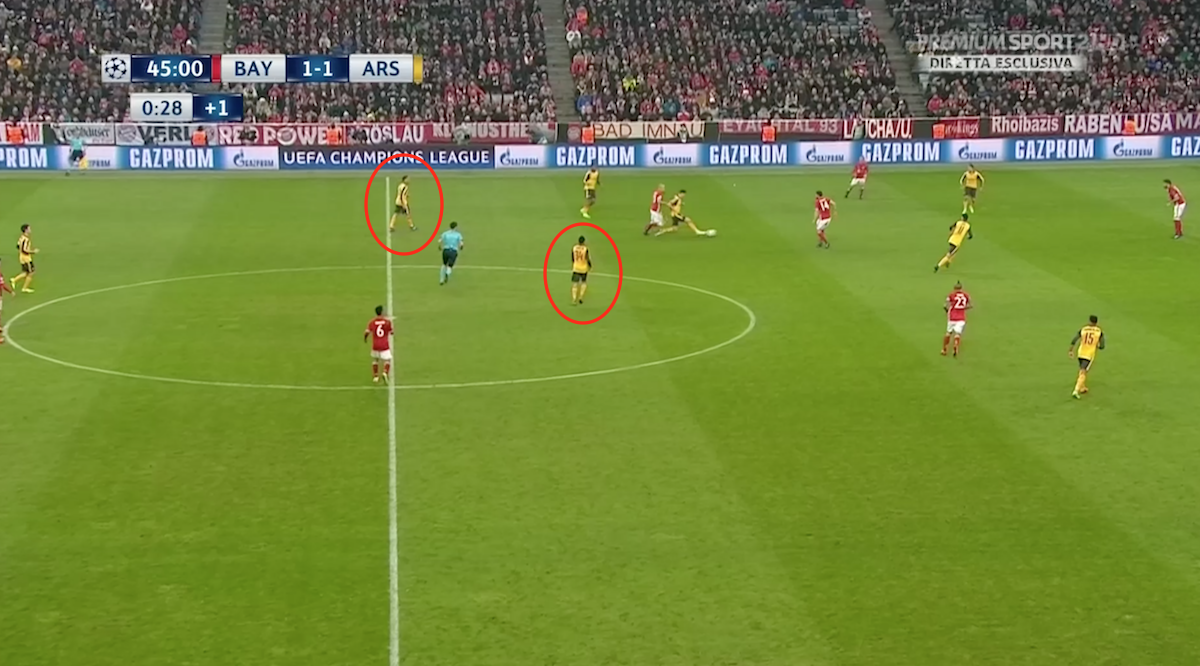 Wenger would want one of his two midfielders to join the attack and provide an option at least at the edge of the box. 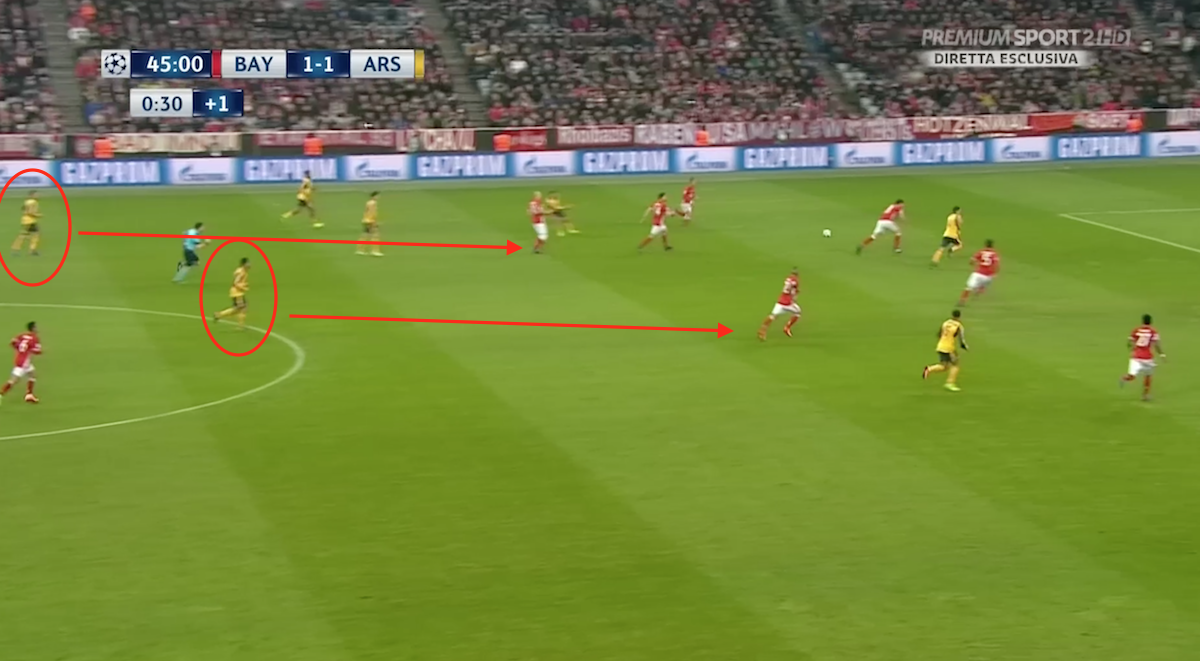 Rabiot is excellent at that, without compromising his defensive duties.

The Frenchman averages more dribbles than the Arsenal duo, just short on tackles, but nearly half as many fouls.

Do Spurs need another midfielder? 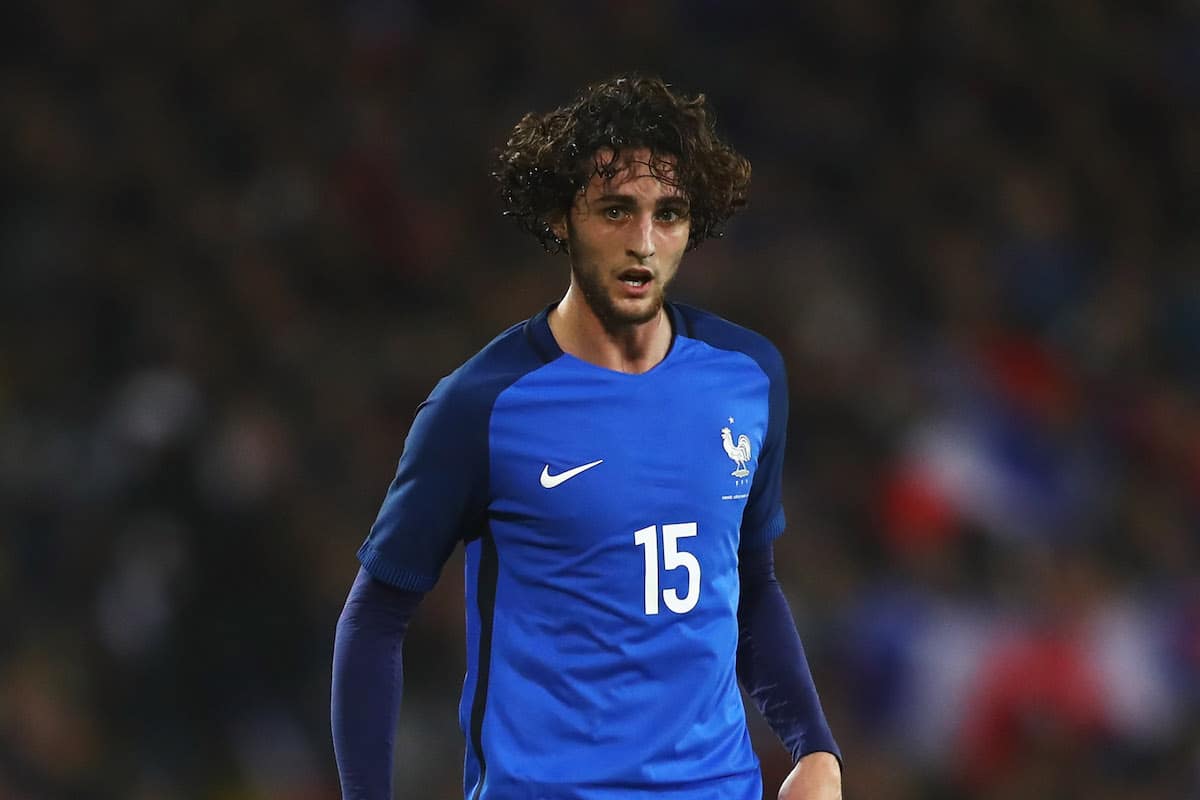 Mauricio Pochettino’s side find themselves on the edges of being true Premier League challengers.

Fans may want to see more experienced players join the squad, but that’s not the Argentine’s style. Young, talented, promising players, with potential to become great. That’s his remit and Rabiot fits that mould. 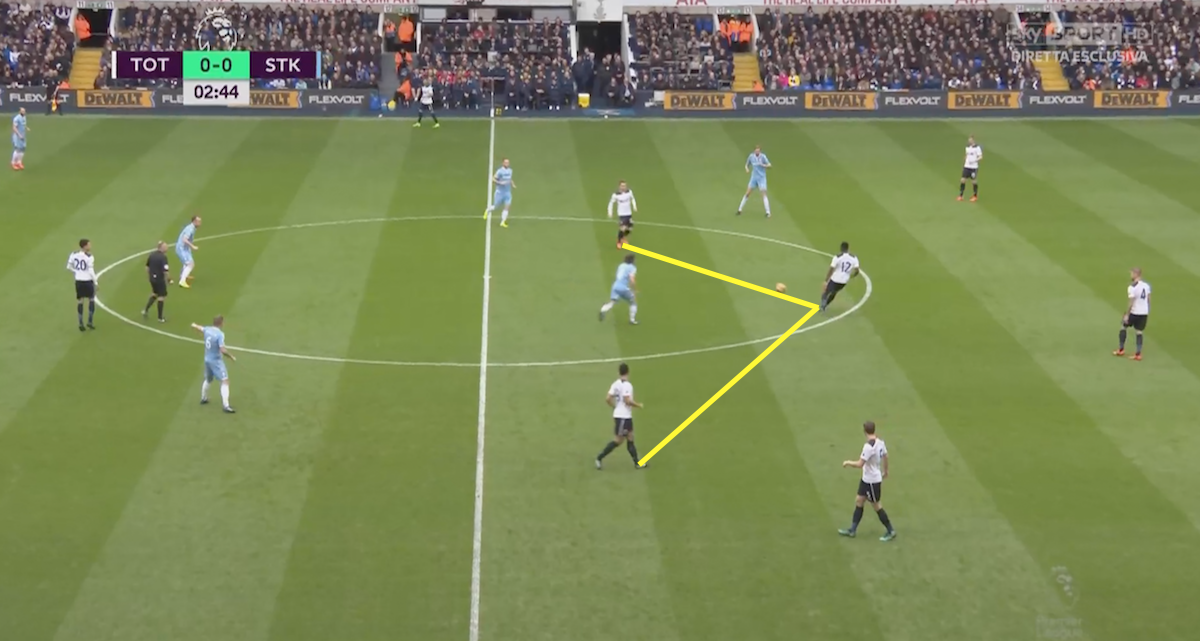 Whether playing 3-4-3 or 4-2-3-1, Spurs midfield likes to make little triangles. Victor Wanyama usually at the base. Christian Eriksen will drop deep and Dembélé on the other side. Rabiot would be perfect there. Looking to spray long bass, push midfield forward and give the North London club another option in attack.

Against Barcelona, he was tasked with picking up Messi, or anyone else who took up position in the middle. 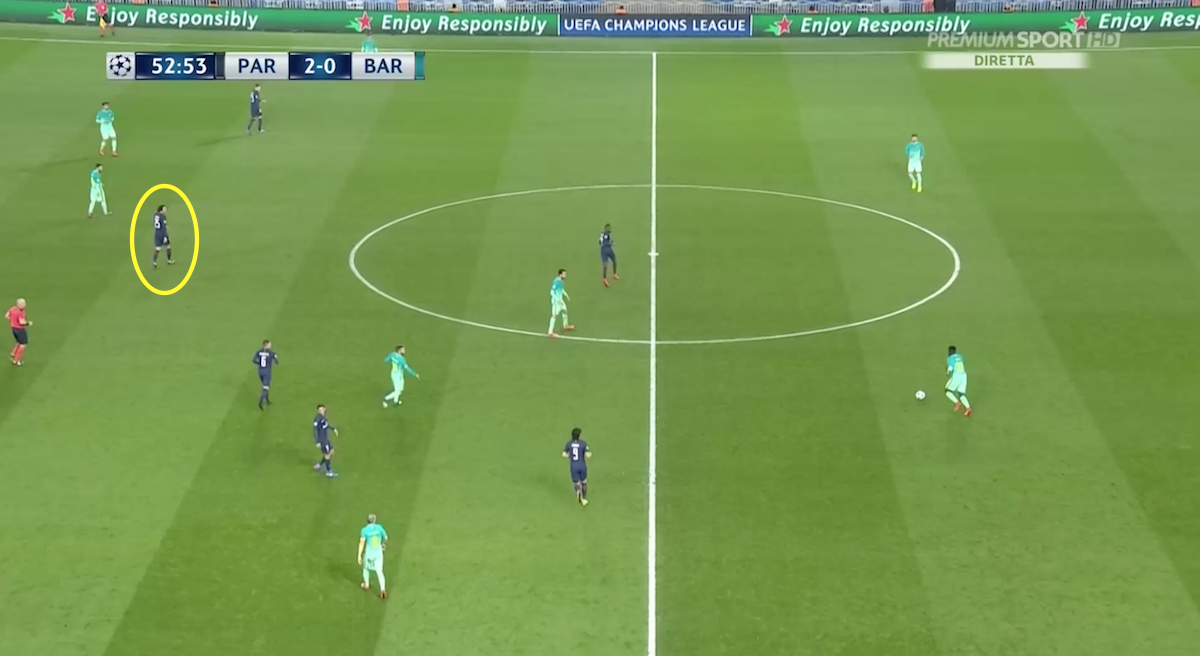 Always looking over his shoulder, he was disciplined and on alert. Whenever they attempted to play a pass to the No.10, Rabiot pounced. 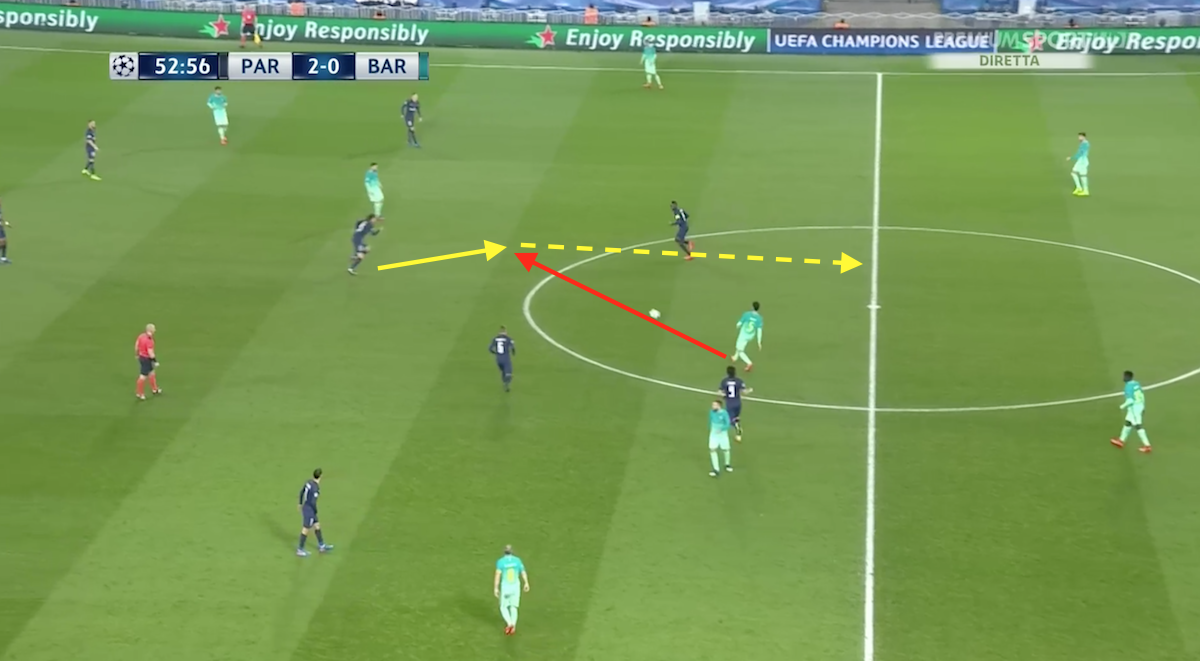 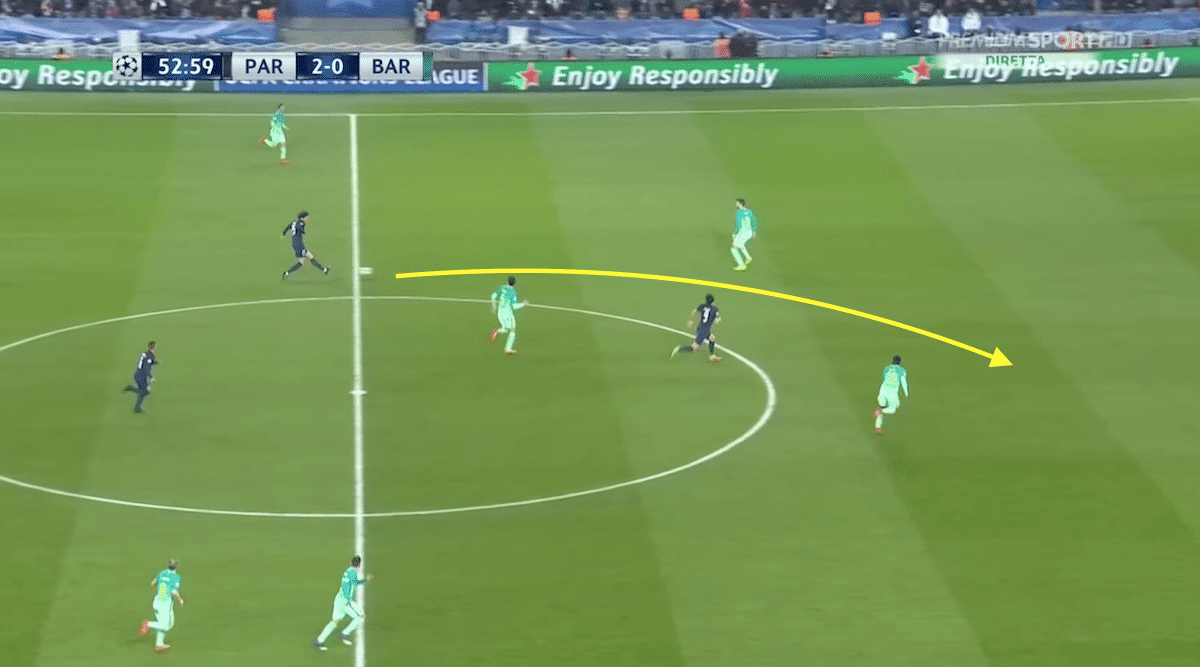 Then, as you can see from the screenshots, rather than play defensive first, he was forward-thinking, trying to build on PSG’s lead.

The pass to Cavani doesn’t come off, but the intention was excellent.

Would he leave PSG?

The 21-year-old signed his last contract extension in 2014, and back then it came from a very bad place. His mother was working at trying to get him more time on the pitch and the interest from Spurs and others made her feel she had his best intentions at heart.

Eventually, both sides caved and a deal to 2019 was penned.

Now, with the France Under-21 international on around €60,000-a-week, a move to either London club, if they wanted him to be part of their first-team, would be able to almost double his wages and not exceed their current wage bills.

“I am under contract until 2019, it is not urgent,” Rabiot told Le Figaro before the Barcelona game. “We will have time to talk about it at the end of the season. The club knows. They try to protect themselves, to extent the maximum number of players and I understand them.

“I know they rely heavily on me, that I am part of a group of young players with whom we can form a new nucleus for the future.”

Rabiot knows PSG need him, they know that and that could be a factor in any new contract situation.

What London club suits him best?

Arsenal have always been touted as a great possible destination, but in Wenger’s 4-2-3-1, he wouldn’t have the protection that he gets in PSG’s 4-3-3. Especially with Mesut Özil not one to put the defensive side of the game first.

The Gunners would still need a defensive first option beside him, so you’d need to rebuild the whole midfield.

It would take a change in formation to incorporate Rabiot into the current squad, but that might not be a bad thing with their results of late.

Spurs look the better option now, they may be the outsiders, but they are trying to build something special. Rabiot could be the player they could realistically sign that enhances their midfield.

There were complaints over the way Dembélé slows down the midfield, Rabiot slots in perfectly and could play and adapt however Pochettino wants to line them up.

One doubt over a move to London, regardless of what team is the price they would need to pay to convince PSG to sell and convince Rabiot he is the future of the club.

Spurs don’t go big like that and under the manager situation is solved, Arsenal will be in second place.

Either way, Rabiot has grown and matured into a player that would thrive in the Premier League. Now, it’s up to the pack chasing Chelsea to make it happen.