Maurizio Sarri’s reputation has grown dramatically over the last few years. Having previously spent much of his time coaching in the Italian lower leagues, his appointment as Napoli boss in 2015 has led to continent-wide appreciation for his philosophy and organisational capabilities.

He came close to toppling Juventus in 2016 and ran the Bianconeri close once again this season.

This is worth putting into context. While Napoli are one of the bigger teams in Italy, they haven’t won the title since 1990. Traditionally they fall just behind the northern giants – AC Milan, Inter Milan, Juventus – and just over a decade ago they were in Serie B.

Even if they don’t win the league this term, they are almost certain to achieve three straight top-three finishes for the first time since the halcyon days of Diego Maradona. All of this goes some way to explaining why both Arsenal and Chelsea are reportedly considering Sarri to be their next manager.

There has been talk of late that Sarri will leave Naples, especially after club president Aurelio De Laurentiis appeared to criticise the coach after falling short in their bid to clinch the Scudetto.

The 59-year-old’s future is far from certain and he could very well end up being the Premier League’s next major managerial arrival.

So, what would Sarri bring to the English top flight? The most obvious answer to this question is beautiful football. His iconic tactical approach has led to gasps of admiration from analysts and fans across Europe, while Napoli have become the neutral’s favourite team.

In terms of formation, he prefers a 4-3-3. With Napoli, this has involved the use of two physically strong but technically assured centre-backs in Kalidou Koulibaly and Raul Albiol in front of a sweeper-keeper in Jose Reina.

They are flanked by two energetic full-backs: Elseid Hysaj and Faouzi Ghoulam. Jorginho acts as the midfield pivot, linking with the centre-backs during build-up, while Marek Hamsik and Allan are more forward-thinking. The attacking trident consists of one fluid No.9, Dries Mertens, and two wide forwards – José Callejón and Lorenzo Insigne – who are comfortable cutting inside.

One of the most noticeable aspects of the way Sarri teams play is the speed and verticality of their possession. While they tend to dominate the ball, they are not conservative and regularly look to go forward and break the lines. They often establish control through short passes at the back before building attacks with penetrative passes to Mertens, who will then lay off to one of Hamsik or Allan to drive into the attacking third.

It’s also worth pointing out the different ways Sarri’s Napoli attack depending on which side of the pitch they go down. Most of the time they will opt for the left-hand side, where there is a lot of positional rotation between the left-back, left-sided central midfielder and left winger. Indeed, 46 per cent of their attacks in this Serie A campaign have come down the left flank. On the right, however, they are more direct, with the pace, industry and intelligent movement of Callejón and Allan offering an alternate threat.

Sarri is adaptable, however, and is not wedded to a particular system. While 4-3-3 has become his overwhelming preference at Napoli, he did initially experiment with a 4-1-2-1-2 system that he had used with great success at Empoli. Were he to join either Arsenal or Chelsea, the only structural certainty is that he would want to install a back four; beyond that, he’d be open to adjusting his formation to suit the players available. 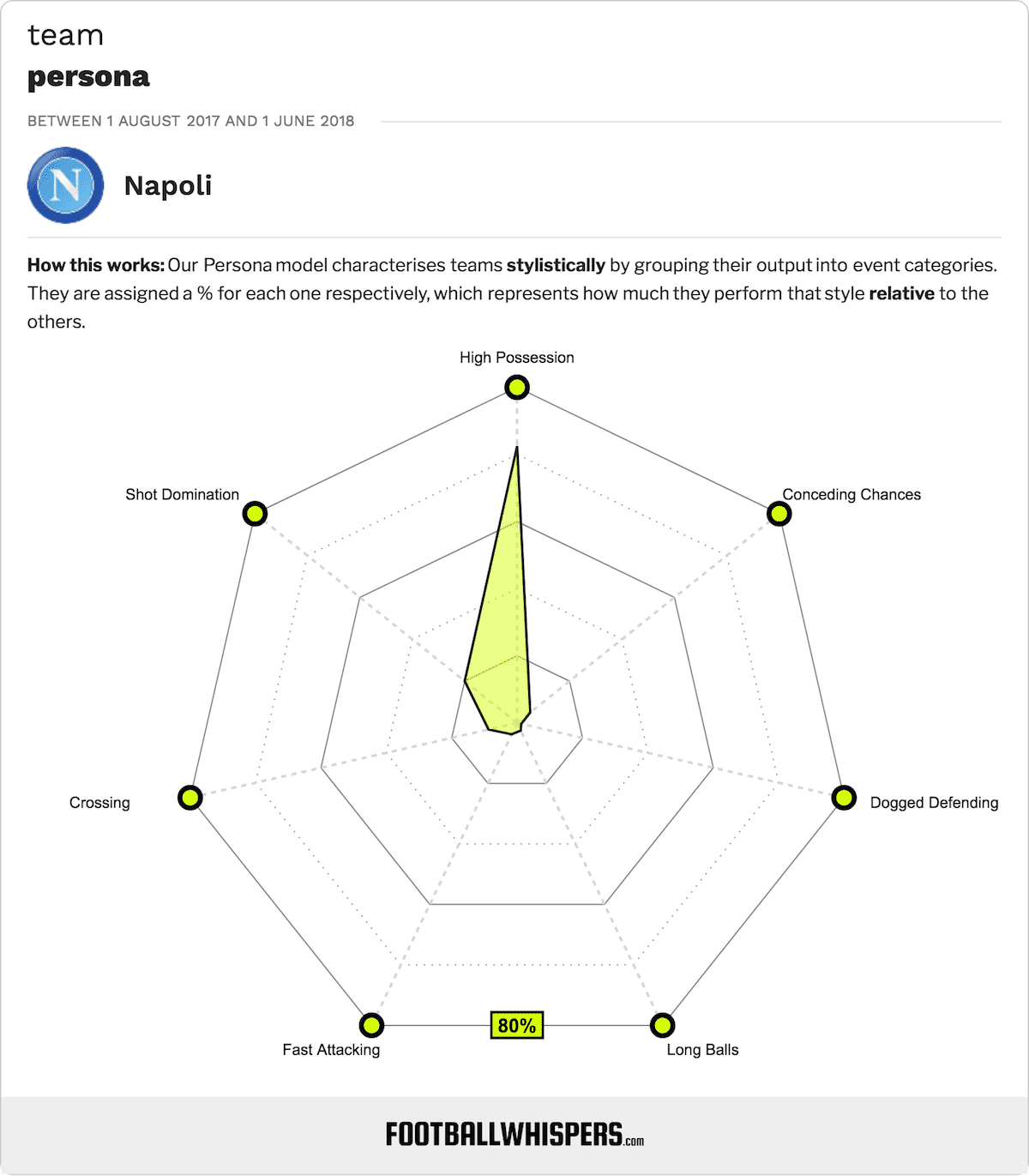 He also wouldn’t be particularly imposing off the pitch, at least not during the transfer windows. Speaking during his first pre-season with Napoli, he said: “I don’t think about the transfer market. I hear from [sporting director Cristiano] Giuntoli every three days, and it doesn’t interest me. I like to coach the lads I have available.”

In short, Sarri is the purest form of coach there is. This perhaps stems from the fact that he didn’t have a playing career and came to football only after working as a banker. It was only in 2001, by which time he was 41 years old, that he decided to do commit wholeheartedly to coaching. Without the contacts, experience and reputational benefits afforded to former players, he had to work his way up the Italian football ladder bit by bit, making do with what he had.

Having honed his craft over decades, he has been able to transform playing careers with unerring frequency. With Empoli, he gave a chance to Daniele Rugani, who is now one of the most promising central defenders in Europe. He also helped to establish the likes of Hysaj, Mário Rui, Lorenzo Tonelli and Mirko Valdifiori as Serie A players before taking them with him to Napoli.

In Naples his man-management and coaching nous has been even more overt. The previously error-prone Koulibaly has been reborn as one of the most composed centre-backs in the world; Jorginho has gone from squad player to key man; and Insigne has developed into a consistently productive attacking force.

Sarri would suit Arsenal primarily because of his tactical approach – his adventurous possession game would essentially be a more refined version of what is on show under Arsène Wenger. He could also help to maximise the qualities of those at the Emirates Stadium who have too often flattered to deceive.

However, Sarri would also fit in at Chelsea, where his indifference towards the transfer market could finally see the club develop their own talent. Home-grown starlets such as Ruben Loftus-Cheek and Tammy Abraham would undoubtedly benefit from his transfer asceticism.

Wherever he lands, Sarri’s arrival in the Premier League would be a boost to the league as a whole. His style of play would add beauty to an increasingly exciting and competitive division, while his unconventional rise to prominence could potentially spark a cultural revolution, going against the widely accepted notion that you have to have played at the highest level to coach there and opening English football up to new ways of thinking.