Adama Traoré is finally living up to the hype.

A product of Barcelona‘s famed La Masia academy, the 23-year-old left Catalonia in 2015 in search of regular first-team football. To the surprise of many, he ended up at Aston Villa.

His time with the Villans was disappointing and after one year he was on the move again. This time, to Teeside. Middlesbrough added him to their ranks to bolster their squad after returning to the Premier League. The season ended in relegation but Boro held onto the Spain under-21 international.

His form in England’s second-tier didn’t go unnoticed and Wolverhampton Wanderers, newly promoted to the top flight, parted with a fee in the region of £18million to land the powerhouse winger.

His debut season with Nuno Santo Espírito’s men ended with just a single goal. However, there was a touch of Wilfried Zaha to his performances.

He petrified defenders and he racked up remarkable dribble numbers (8.17 per 90 minutes) but there was very little to show for this – just 0.13 expected goals and 0.19 expected assists per 90.

In isolation, the latter two stats are generally decent. A winger playing for a side outside the top six, who aren’t the most attacking anyway, posting an expected goal contribution of 0.33 per 90 shouldn't be sniffed at. But because of how dominant he was and how effective he could be, it always felt as though Traoré was lacking the one thing to take him to the next level.

That was until this season.

Traoré has been at his rampant best for Wolves, scoring in both matches against Manchester City while also finding the back of the net in the loss to Tottenham Hotspur. He’s also racked up four assists in 1,582 minutes. In fact, Traoré has been involved in a Premier League goal every 197 minutes; he's had a direct hand in 26 per cent of the goals scored by Santo’s team.

His man-of-the-match performance against Manchester City over the festive period was too much for the top teams to ignore. Since his goal and assist showing, he’s been linked with the reigning Premier League champions, Real Madrid, Barcelona and Liverpool.

Reds boss Jürgen Klopp singled Traoré out for praise after the two sides met in December: “He is really dangerous. In a big space, Jamie Vardy is difficult to defend, but I would say Traoré is even more difficult to defend because his speed is exceptional.

“He finally found his manager who found a position for him. At he was exceptional, but somebody had to give him the right information.

“A big, big talent. You would never have thought he is that young, but he is still very young, and now he has found [the right manager]. It was always clear it would happen one day, and now it has. Good for Wolves.”

Wolves want in excess of £70million for their explosive wideman. An eye-watering amount for a player who is currently nowhere near the finished product. But, to the likes of Pep Guardiola and Klopp, there’s something about the former Barça forward that is intriguing. With a bit of work, he could be utterly devastating. But the question is whether the reward is worth the risk.

The price being mooted would be a club-record fee for Manchester City, for example. Liverpool paid £75million to sign Virgil van Dijk, but he was viewed as a game-changer whereas Traoré is more of a project. 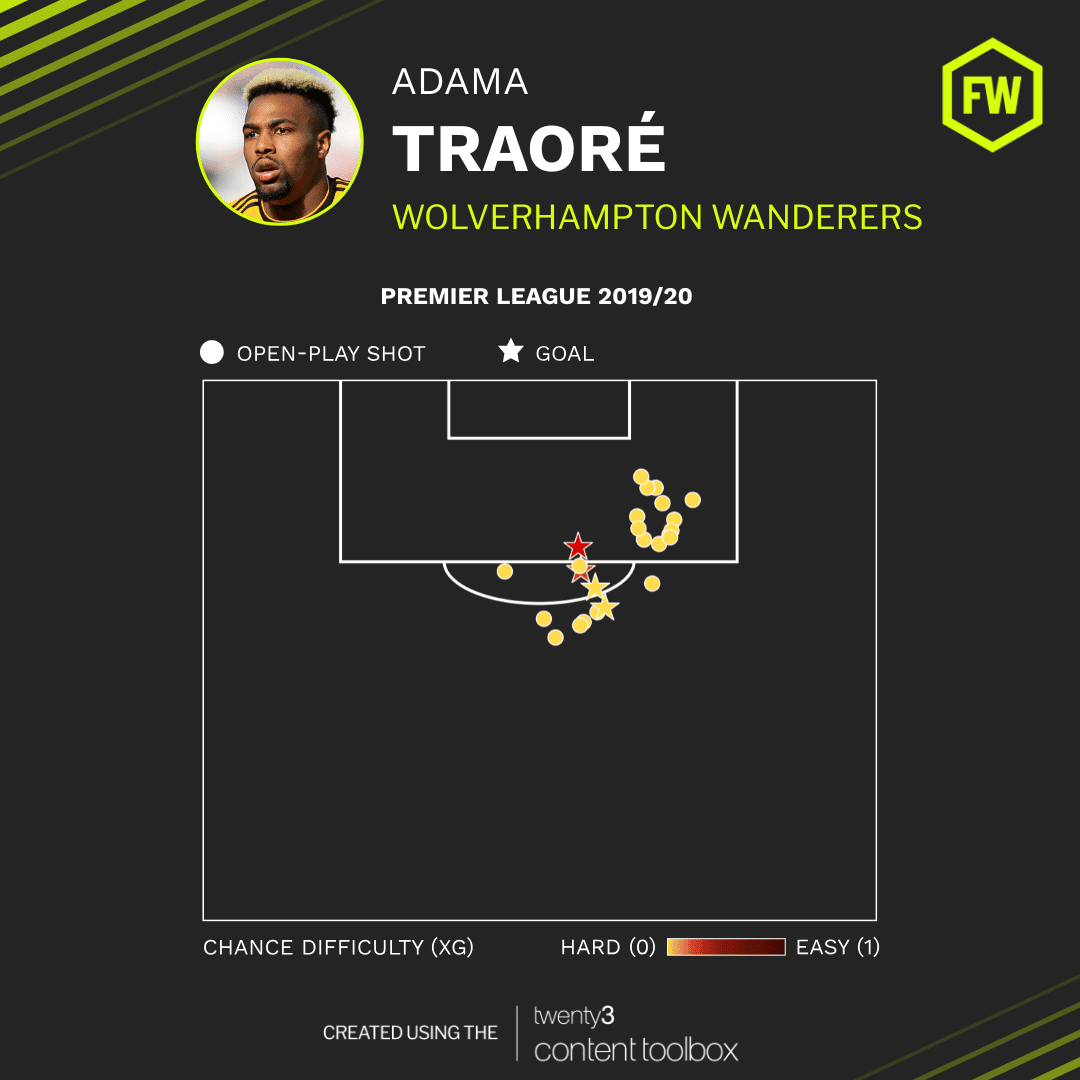 His shot map, shown above, strangely paints a picture of a predictable player. It's so far removed from him as a maverick individual, but his desire to take shots really early has produced a bit of a pattern.

Despite this, he's oddly effective. All four of his goals this season have come from virtually the same area of the pitch. However, to be an effective goalscorer and a genuine goal threat, he needs to add unpredictability to his shot selection. He needs to use his intelligence to work better, more high-value chances on a regular basis.

On shot maps, there should be more red dots than yellow ones. Red ones represent sustainability and, in order to be a reliable goal threat, you need just that. But if a coach worked on his timing and his composure, the majority of those efforts would end up being five yards closer to the goal and five yards more central.

That will no doubt be the temptation for those clubs showing an interest in him. A little bit of work and you have one of the most unique players in world football at your disposal.

Traoré always had huge promise, he's now so close to delivering on it. A big-money move could be what completes the transformation from frustrating winger to devastating attacker.