Adama Traoré is a bit of a dribble freak… although Wolverhampton Wanderers are doing their best to coach that out of him.

The Spaniard’s current rate is an impressive 6.38 per 90 minutes. However, that is way down on the 9.72 he managed last season while at Middlesbrough.

Traoré is usually streets ahead atop of the European leagues for take-ons. This term, while he’s still leading the way, he is only just ahead of Sofiane Boufal (6.16 per 90).

Part of this is because he’s been played in different positions under Nuno Espírito Sancho. No longer exclusively a winger, Traoré has, at times, been used more centrally. And the widest positions in the Wolves team are taken up by the wing-backs.

Beyond that, though, there is a reason to want to rein in the most prolific dribbler Barcelona's famed La Masia academy may ever have produced.

The closest to him in the Premier League, of players to have completed 25 take-ons or more, is Tottenham's Lucas Moura, at just over 20 per cent.

However, and it's a big one, Traoré has only followed one of his successful take-ons with a completed pass into the box, and only three further times has he followed one up with any other kind of successful pass.

For a player so adept at carrying the ball up-field, this must be incredibly frustrating to his manager and to Wolves fans.

Below are the double-take-on dribbles he's made this term, marking where he picks up the ball and where the take-ons take place. He certainly covers a lot of ground. 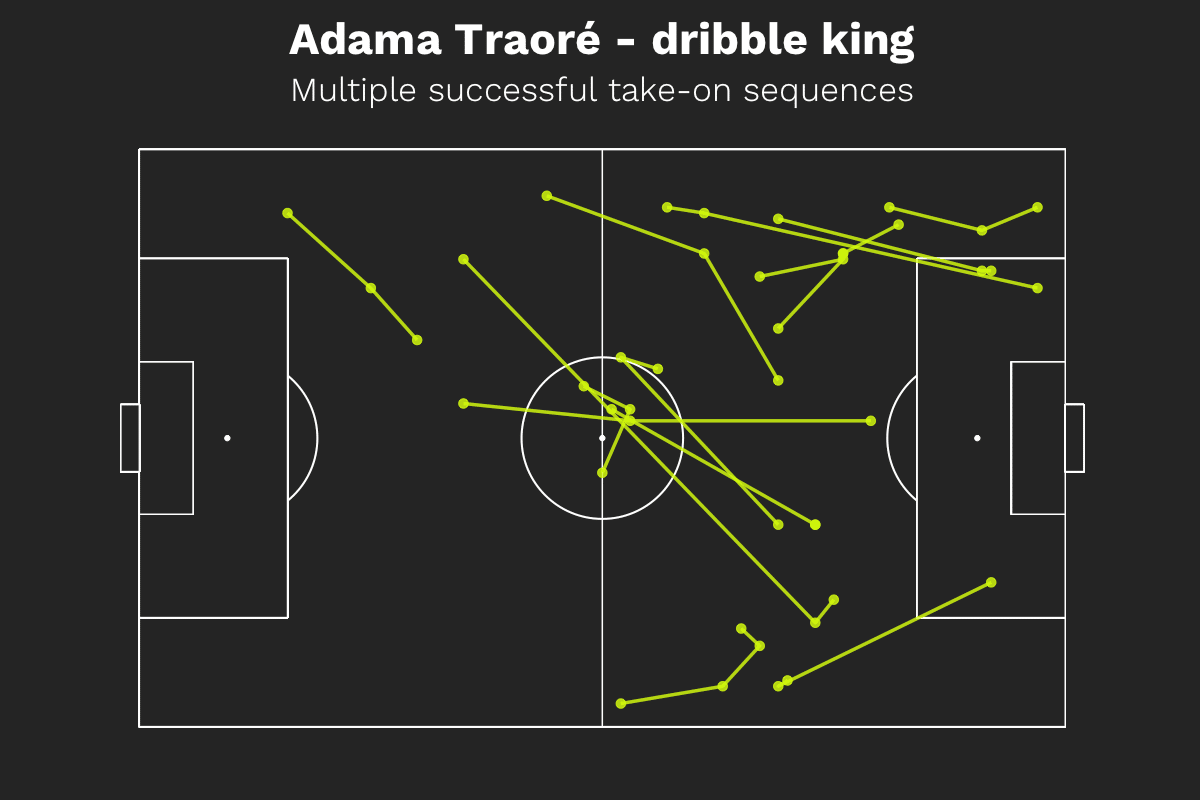 All hope is not lost, though.

If Traoré has beaten two men in a row, he’s not losing the ball. More often than not, these sequences end with him being fouled, with the next most likely action either him getting off a pass or a cross.

Of course, there are times when Traoré tries to follow up a take-on with another one and fails. But these are few and far between. His dribble success rate immediately following a take-on is 83 per cent, way above his overall success rate of 67 per cent

Traoré is eye-catching because he’s such an incredible outlier at completing multiple take-ons in a row, yet he continues to lack a reliable end product.

It's a story we've seen time and time again with wingers, but rarely has anyone embodied it to this extent.

Will he learn? It will be fascinating to wait and see.