Goals: the most precious commodity in football; championships and promotions are built on them, and relegation staved off by their healing powers.

So, any team with designs on a quick rise through the divisions, with lofty ambitions and a healthy bank balance, should seek a player with a reliable track record of hitting the back of the net as a matter of priority.

This is exactly what Salford City have done with their acquisition of Adam Rooney.

The 30-year-old Irish striker became the subject of headlines and moralising editorials when he made the switch from Aberdeen to that fast-rising National League side this summer, with many suggesting a striker of Rooney's calibre would only exchange the Scottish top flight and regular European football for the English fifth tier for one reason – money. 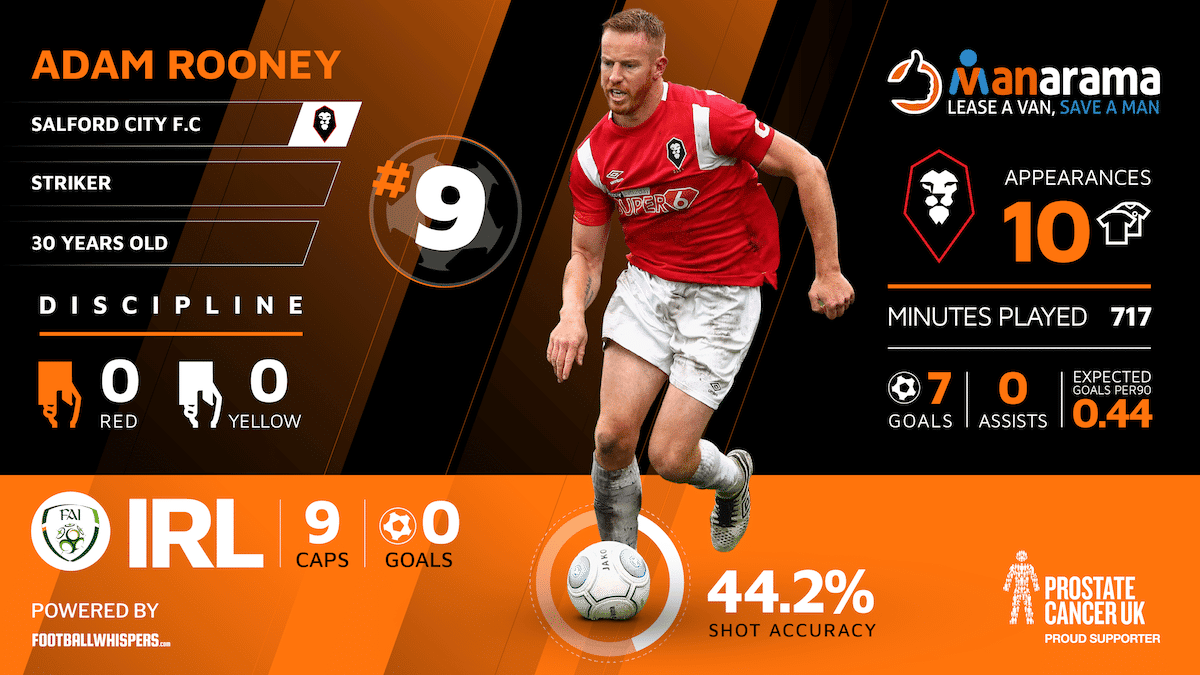 Rooney's Salford switch has reportedly seen him double the weekly wage he earned at Pittodrie, now pocketing somewhere in the region of £4-5,000 per week. Detractors have used this as a stick to beat the striker with, while the club, half-owned by former Manchester United stars, have been accused of attempting to “steal” a place in the Football League” by Accrington Stanley chairman Andy Holt.

The 30-year-old centre-forward, who was Aberdeen's top scorer in each of the last four seasons, takes umbrage with those accusing him of a lack of integrity, detailing in recent interviews how he faced an online backlash upon joining Salford.

“I didn’t look at my phone for four days after because of all the messages and texts and social media stuff I had directed towards me,” Rooney told Talksport. “It was a bit of a shock to be honest.”

“I had four and a half great years at Aberdeen,” he said, speaking to the BBC, “and I loved my time there but I just felt it was possibly the right time to move on.”

“I think it's a load of nonsense to say my move has meant a decline in Scottish football.

“You look at it from the outside and I probably didn't play as much in the last couple of months of the season and I felt it was probably a good time to move.”

Rather than the decision to swap a Scottish contender for an English upstart being motivated purely by money, Rooney contests Salford's ambitious project was the driving factor behind his Moor Lane move.

The ‘Class of 92' owners have set their sights on shooting up the English football pyramid. With their recent successes – they have been promoted three times since the 2014 takeover – have been covered by popular BBC and Sky Sports documentaries, raising the public awareness of the club's ambitious goal of reaching the Championship by 2029.

“I’ve seen the club come through the divisions over the last through years on social media and it was something I was interested in listening to,” Rooney told Talksport.

“I possibly could have gone to another SPL club, or a League One or League Two side, but this is something that really intrigued me to come and be part of a very successful time in this club’s history.

“When you speak to these guys and you see the people who are involved here and what they achieved in football, you can tell right from the start they want to make this a success.”

And Rooney has set about silencing his critics in the best possible way: by scoring goals; he currently sits top of the National League's scoring chart with seven strikes from ten appearances for Salford.

The savvy movement to sniff out chances, the composure in front of goal and precise finishing Rooney has displayed already for Salford does indeed suggest that he remains more than capable of playing at a significantly higher level. But they way they are climbing the divisions so rapidly, he could soon be doing so with Salford.

His salary may well dwarf that of any other National League player, and it is highly likely the fee Salford paid Aberdeen for the striker – officially undisclosed – is a club record. But when it comes to achieving their lofty aims, the goals Rooney guarantees are as good as priceless for Salford.