Moussa Dembélé and Odsonne Edouard, two exciting attacking talents who Celtic have snapped up in recent years. If reports are to be believed, they’re set to sign up another in Australian Daniel Arzani.

The Australian A-league hasn’t produced much in terms of footballing talent, and the men’s national team, the Socceroos, are seeing their talent stocks dry up as a result. Gone are the days of Mark Schwarzer, Mark Viduka, Harry Kewell, and, most recently, Tim Cahill.

It’s fresh and exciting, then, for a young Aussie to be tearing up the league to the extent that Arzani has been.

The 19-year-old is the antipodean dribble king, completing 8.28 per 90. For all of the leagues that Football Whispers has data for, that’s the second highest rate after only Adama Traoré (9.72). 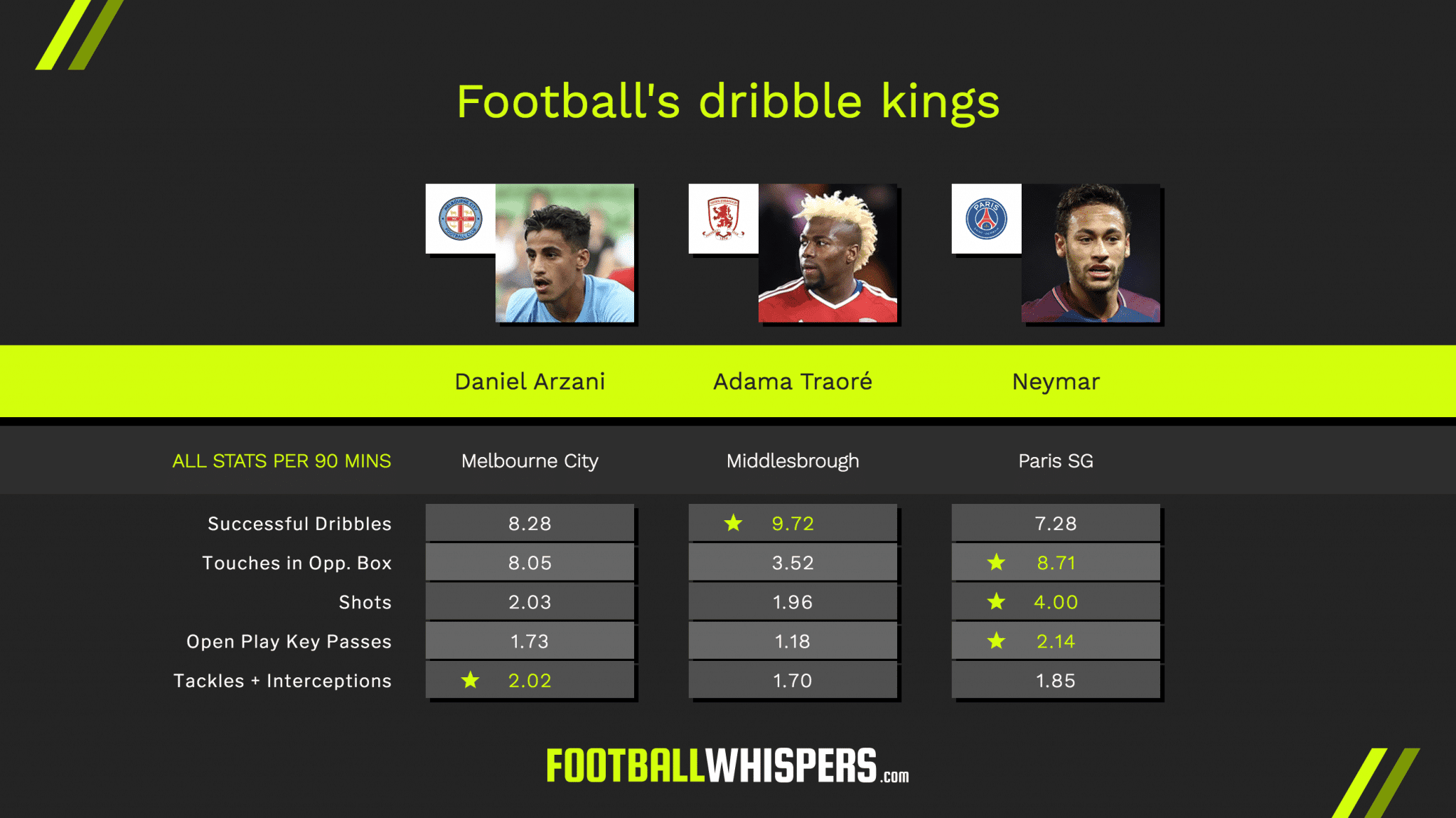 He was second in the league, at just 19 years of age, for touches in the opposition box and open-play key passes per 90 (8.05 and 1.73). Even adjusting for the quality of the oppositions he’ll have faced, these are stats to take notice of.

It’s not just Arzani’s raw pace that is a cause for concern for opposing defenders, but his ability to change direction and accelerate away too. And not only that, but he does it with his head up, looking for passes, and has the technical ability to be able to deliver them while running at pace.

How well that all of this will translate to Scotland – or, indeed, another big European league – remains to be seen. While Arzani has speed and decent close control, he tends to be able to beat A-league opposition quite easily with a simple cut to the inside or outside when the defender sells themselves on making a move in either direction.

Being able to spot these moments and exploit them so easily is a good skill, absolutely. But as he moves up the leagues he’ll come up against defenders with better footwork and body positioning, and to reach the real heights he’ll need more tricks in his locker. 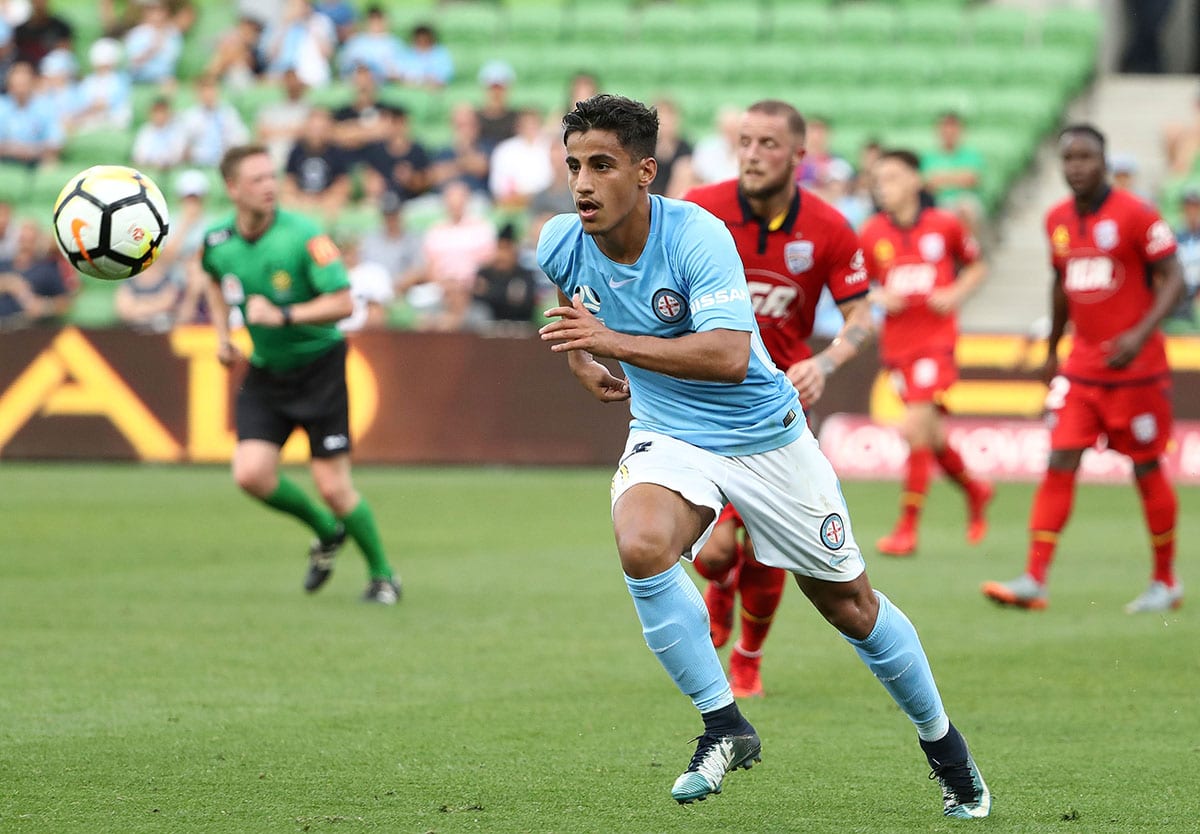 The key pass numbers won’t necessarily translate either. While some of his passes in dangerous areas come with his head up, others are more ‘cookie-cutter’, making generically sensible passing options upon reaching the box, whether these are cut-backs or (well-weighted) crosses to the back post.

In the A-League, these no-look cookie-cutter passes are probably more likely to find a target, as long as the attack is well-drilled enough to position men here. Better defences would likely deal with these better.

What Arzani would bring to Celtic

Arzani would probably slot in quite well as one of the wider forwards in a 4-2-3-1 or 4-3-3, although he seems to like getting the ball very wide so that he can build up speed driving inside.

The rumour is that a loan move is being lined up – although Brendan Rodgers has been vague in his response to these claims – but it wouldn’t be a surprise if Celtic fought to get a low-price option to buy in there.

Arzani is certainly talented, but the performance and progress of young players can be unpredictable. It would seem to make more sense for Celtic to try and get the dual benefit of a hot prospect – the immediate impact of what they bring to the pitch, and the potential value in selling them on for a profit.

The club that the teenager plays for complicates that though. He’s at Melbourne City FC, part of the City Football Group, and so Celtic might have to deal with Manchester City as much as Melbourne in their negotiations.

It makes perfect sense for CFG to send their young star to a European league like the Scottish Premiership, to get him adapted to European football, being away from home, and giving him game-time as he continues to grow and mature.

However, it would make less sense for them to sell him to a club outside of the City Football Group who they may have to buy him from at a later date for a higher price.

Whatever the paperwork logistics of the potential deal may be, Arzani is definitely someone Celtic fans could get excited about.