Accrington have taken points of two of the top six in their last two matches. In Charlton, they face a team aiming to finish in that aforementioned top six. Can Accrington spoil their chances? Find out with our Accrington vs Charlton match preview with free tips, predictions and odds mentioned along the way.

Charlton to chase down top six

Charlton's playoff race has stalled in the past week with four dropped points whilst Accrington have done them a favour by taking points of Sunderland and, more importantly, Portsmouth who Charlton have their eyes fixed on. Why then do we think Accrington won't manage to hold Charlton as well? For one thing, another game at this time in the season is another closer to the end of the season for Accrington, which helps. The main driver though is Charlton's away form. They've won their last three and haven't lost in nine.

Our second prediction is for there to be over 2.5 goals. The explanation for this bet is rather straight forward. In Accrington's last five home games the score line has ended up with three or more goals four times including the last three. Charlton, who are the visitors here, have seen three of their last five road matches end north of 2.5. The averages in that period are sky high too. Accrington's sits at 3.8 per match with Charlton 2.8.

Accrington to be quiet in front of goal

The last of our tips backs Charlton to keep Accrington's goal tally under two goals. Part of this is based on the fact Accrington have failed to score two or more goals in six of their last 10 home matches. The other factor comes from Charlton's defence in away games; they've recorded six clean sheets in 10 with a further two matches conceding just one goal. That means only twice in 10 on the road have a team managed to score two or more goals against the Addicks.

Charlton to jump into the top six?

Accrington know their season is done but they're still giving a good account of themselves and can have a further say in the playoff race as they face Charlton on Saturday. Charlton know that if they win all their remaining games, they'll finish in the top six. No pressure. 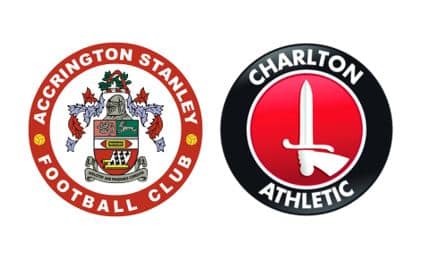