Round 37 of the EFL League One will bring us the match-up between Accrington Stanley and Wigan. If you are looking to bet on this fixture you are in the right place! Stay with us to get the latest top free betting predictions and odds. For more of the same, check out our dedicated League One betting tips page.

Here is our experts’ take on the game in hand:

Always keep in mind that the odds are subject to constant change, so proceed with caution when finalizing your wager. Our recommended bookmaker for this match is Ladbrokes.

Here we pick Accrington in the Draw no Bet market because they are the favorite of the two, and the head-to-head statistics show us that there haven't previously been draws between these two sides. In fact, the clubs have only faced-off twice before and have both gotten a single win for their efforts.

Both squads are capable of finding the net, so it’s only a matter of whether they can keep a clean sheet. Accrington has only failed to score in 2 of its last 10 games, and the numbers are the same for Wigan. Also, Wigan concedes more than they score (38:61) and with Accrington, it's about right down the middle (46:43).

The previous 2 meetings between these two, have resulted in 11 goals in total. Furthermore, this pick has hit in most of the clubs’ previous matches – 4/5 times for Accrington and 2/5 times for Wigan. Also, the odds of 20/23 provide a decent payout for the risk you take.

Accrington Stanley vs Wigan: Taking a look at both squads' recent results

Along with the stats, you will find our recommendations for bookmakers and odds below.

Sitting in the middle of the table it seems like Accrington Stanley has nothing to fight for in this campaign. However, this is not true, as Accy has a shot at reaching the top 6 and qualifying for the play-offs. With a gap of just 5 points, Stanley needs a few final efforts to break into the top 6.

On the other hand, Wigan is facing a completely different fight. Sitting a single point away from the relegation zone, and just 3 points from the bottom of the table, the Tics need the three points as much as Accrington does. This will be a great fight between the two, which may as well shape both the relegation and the promotion zones.

Stanley will be looking to put an end to a 3-game losing streak, while Wigan has had 2 wins and a draw in their last 3 games. The fixture can go either way, however, Accrington has the upper-hand and the greater shot at victory. 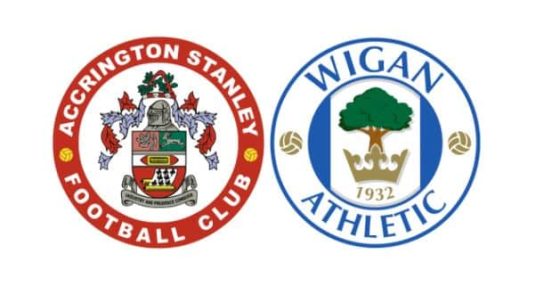