There is no hiding it, all the talk leading into the fixture will focus on the drubbing Peterborough dished out to Stanley on Saturday. A 7-0 defeat is embarrassing at any level of football. The hosts will be looking to be much more competitive this weekend. Burton had been on a good run but they've had no wins in their last three with two losses in their previous two. Offer Burton a draw now and we think they'd take it to continue edging their way to safety; for Accrington, a point would just settle things down after last week.

The starting blocks for this prediction is that Accrington haven't kept a clean sheet in any of their last 10 fixtures. They have, however, netted in seven of those games. Burton meanwhile have scored in each of their last nine. We don't see an abundance of goals in this game with neither side at the peak of their powers but a drab 0-0 it's unlikely to be.

Burton to win or draw, Accrington under 0.5 first half goals, under 3.5 goals

Okay, so we know the #getaprice tips are often longshots but this prediction screams value. Accrington have only scored two first half goals in their last five whilst Burton haven't been involved in a fixture with over 3.5 goals for 14 matches. On top of that, given the thrashing Posh dealt out Saturday, Accrington will be keen to not let the scoreline runaway. Then it's down to whether Burton can avoid defeat; they've only lost two of the last 10 head-to-heads and are unbeaten in three.

All the stats and odds for Accrington Stanley vs Burton

Both sides to settle for a point

Burton's status as a League One club should be safe after an impressive run under their new manager Jimmy-Floyd Hasselbaink. Although things have slowed up in the last few games a win against Accrington would all but confirm their safety. Accrington were absolutely woeful against Peterborough at the weekend, particularly in defence as they shipped seven goals. John Coleman bemoaned his sides injury list but will expect a big reaction in this match. Burton meanwhile welcomed back centre half Michael Bostwick in their defeat at Shrewsbury whilst Danny Rowe could be back for this one after a hamstring scare.

FAQ about Accrington Stanley vs Burton 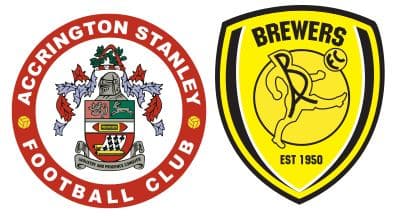