Berekum Chelsea remain in the hunt for a strong finish to the Ghanaian Premier League season. Will that continue here? Find out with our Accra Lions vs Berekum Chelsea match preview with free tips, predictions and odds mentioned along the way.

Lions to roar to a win

A win could see Berekum Chelsea break into the top four

If Accra Lions win this match, both sides could well end up in a midtable position this season. By contrast, should Berekum Chelsea grab the three points and they'll be looking upwards with a realistic chance of finishing second. Accra Lions meanwhile will be glancing over their shoulders.

Accra Lions have had a fairly decent run of form recently; they have no losses in their last four games, with two wins and two draws. Accra Lions will welcome Berekum Chelsea to the Accra Sports Stadium on Saturday; they'll look to extend their unbeaten run to five games.

Berekum Chelsea's form has improved a bit recently; they are coming off back-to-back wins, having won just once in five games before that. Berekum Chelsea will hope to string up three consecutive league wins for the first time since January 2020; it'll be interesting to see how they'll fare against an in-form Accra Lions side.

A quickfire FAQ on Accra Lions vs Berekum Chelsea 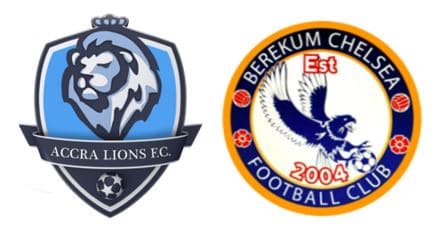