Following an away defeat, Accra Lions make another visit for the next game against the table leaders, Asante Kotoko. Porcupine Warriors aim to end the campaign with a winning sequence.

Accra Lions have secured two wins in the last five games, along with two draws and one defeat. However, Asante Kotoko are unbeaten in the last four attempts and registered a victory in three of them. Porcupine Warriors will also be confident over the recent away results where they are yet to lose in the last four outings. Moreover, the previous meeting between the teams also ended in the favour of Asante Kotoko. For these reasons, we expect the champions to stay on the winning track in this game.

Accra Lions are scoring from the last three outings consecutively and will be optimistic to continue the string, following the home advantage. Asante Kotoko are also expected to have several chances as they have been on the scoring side in all of the previous six away outings and four overall attempts. In addition, the last H2H meeting between the teams also featured the BTTS outcome. Based on the current stats, we predict the same for this duel as well.

Accra Lions vs Asante Kotoko: Check out the best odds and the latest stats

Accra Lions vs Asante Kotoko: Check out the team lineups

Accra Lions terminated their unbeaten streak in the last game by losing a 0-1 lead to a 2-1 defeat against Medeama. With the help of 12 wins and eight draws, the team is currently present at the twelfth position on the points table. The caretaker manager James Francis will have a fully healthy squad available for this game.

Porcupine Warriors returned to the home winning ways in the last game with a 3-0 victory against Elmina Sharks. Following the 19 wins and nine draws, Asante Kotoko has been named the champions of this season. The team manager Prosper Narteh will have zero fitness issues to speak of ahead of this game. 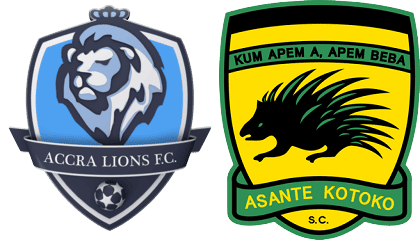 Where is the game being played? Ohene Djan Sports Stadium.