AC Milan remain unbeaten in their opening 9-games of the new Serie A season and the bookmakers are expecting that excellent start to continue at home to mid-table Torino on Tuesday.

Here are our predictions for AC Milan vs Torino.

AC Milan have won each of their last five games against Torino in league and cup and we're expecting another victory for the hosts this week. Both teams have scored in five of AC Milan's last six matches in all competitions, while both teams have also found the back of the net in three of Torino's last five league games.

Last season, AC Milan thrashed Torino 7-0 in Serie A and three of the pair's last six meetings in all competitions have featured over 2.5 goals. Five of AC Milan's last six matches have witnessed at least three goals being scored, while Torino's last game at home to Genoa ended up being a 5-goal thriller, so you can see why we're expecting games on Tuesday night.

All you need to know ahead of AC Milan vs Torino

AC Milan traveled to Bologna at the weekend and came back with all 3pts. Leao put the visitors in front in the 16th-minute and defender Calabria made it 2-0 in the 35th-minute. However, an own-goal from Ibrahimovic and an effort from Barrow early in the second half made the scoreline 2-2. AC Milan left it late to secure all 3pts but did so thanks to goals from Bennacer and Ibrahimovic, who was delighted to have made up for his earlier mistake that led to Bologna's equaliser.

Torino had the home advantage against struggling Genoa but were made to work for their victory on Saturday. Sanabria put the hosts in front in the 14th-minute and team made Pobega made it 2-0 just after the half-hour mark. Genoa pulled a goal back in the second half but Brekalo restored Torino's two-goal advantage 13-minutes from time. Genoa pulled another goal back with 10-minutes left on the clock and setup a nervy finish to the game but Torino held on to win the game.

AC Milan: Rebic, Kessie, Diaz, Hernandez, Maignan, Messias, Florenzi and Plizzari could all miss the midweek game against Torino due to injury, illness or self-isolation.

Torino: the visitors look set to make the trip to Milan without Ansaldi, Mandragora, Verdi, Pjaca or Edera as each is struggling with an injury. 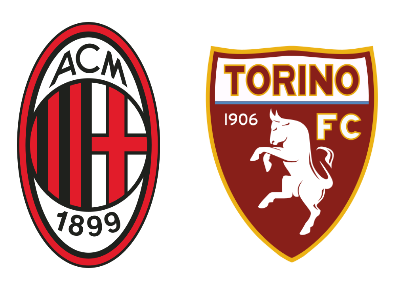