AC Milan are a European dynasty. They are a club whose class is only bettered by it’s history. It’s easy to forget after how terribly the club has been mismanaged over the past few years how much of an institution AC Milan are to the footballing world.

This is a club with 18 Serie A titles and 7 European Cups. It's the club who gave the world Franco Baresi and Paolo Maldini. A club who over the years have been able to name the likes of Marco Van Basten, Ruud Gullit, Frank Rijkaard, Marcel Desailly, Zlatan Ibrahimovic, Andriy Shevchenko, Andrea Pirlo, Alessandro Nesta, Kaka, Ronaldo, Rivaldo, Ronaldinho and Rui Costa in their starting XI at various stages. A club who has had the fortune of being able to call Arrigo Sacchi, Fabio Capello and Carlo Ancelotti their manager.

This was a club littered in greatness from top to bottom. It was a club known for building legacies.

But then cracks started to appear and the empire began to crumble. Poor investments were exacerbated by poor managerial appointments and a vicious cycle began. Milan went from challenging for Serie A to a mid-table club in the blink of an eye. Their league positions for the last three seasons read 8th, 10th, 7th. Since Massimiliano Allegri was sacked in January 2014 six different managers have been in charge at the San Siro.

The man currently at the helm of Milan is Vincenzo Montella. Montella’s Fiorentina side, which he managed between 2012-2015, played arguably the second best football in Italy behind runaway leaders Juventus. It was football at it’s purest as his team looked to play possession based football. Upon his appointment as Milan manager many queried whether the current squad could replicate what made Montella so successful at Fiorentina.

Montella adapted to suit the players at his disposal. Gone was the pretty football an in it’s place a gritty, ugly, hungry style was born. Montella went back to basics. They try to keep it compact at the back before playing on the counter attack. This Milan side didn’t have the best players but they had a pack mentality with Montella as their alpha. 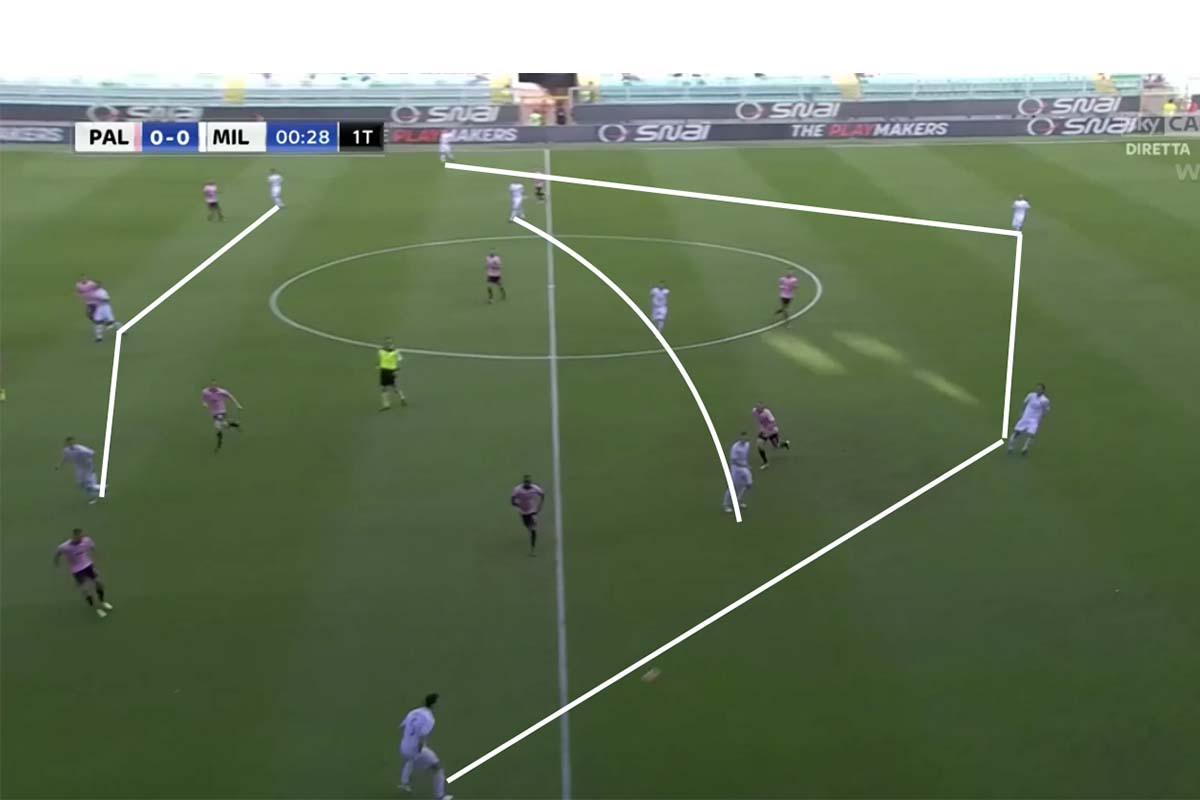 Last season Milan primarily used a 442 diamond but occasionally switched to a flat 442 and flirted with a 451. However, since Montella’s arrival Milan have played a 433 formation and they’ve been consistent with this.

The picture above shows how they line up. 17-year-old Gigi Donnarumma starts in goal and then from left to right the defence is Matteo De Sciglio, Alessio Romagnoli, Gabriel Paletta and Ignazio Abate. The midfield is made up of 18-year-old Manuel Locatelli, Juraj Kucka and Giacomo Bonaventura. The preferred front three tends to be consist of Suso, Carlos Bacca and M’Baye Niang. 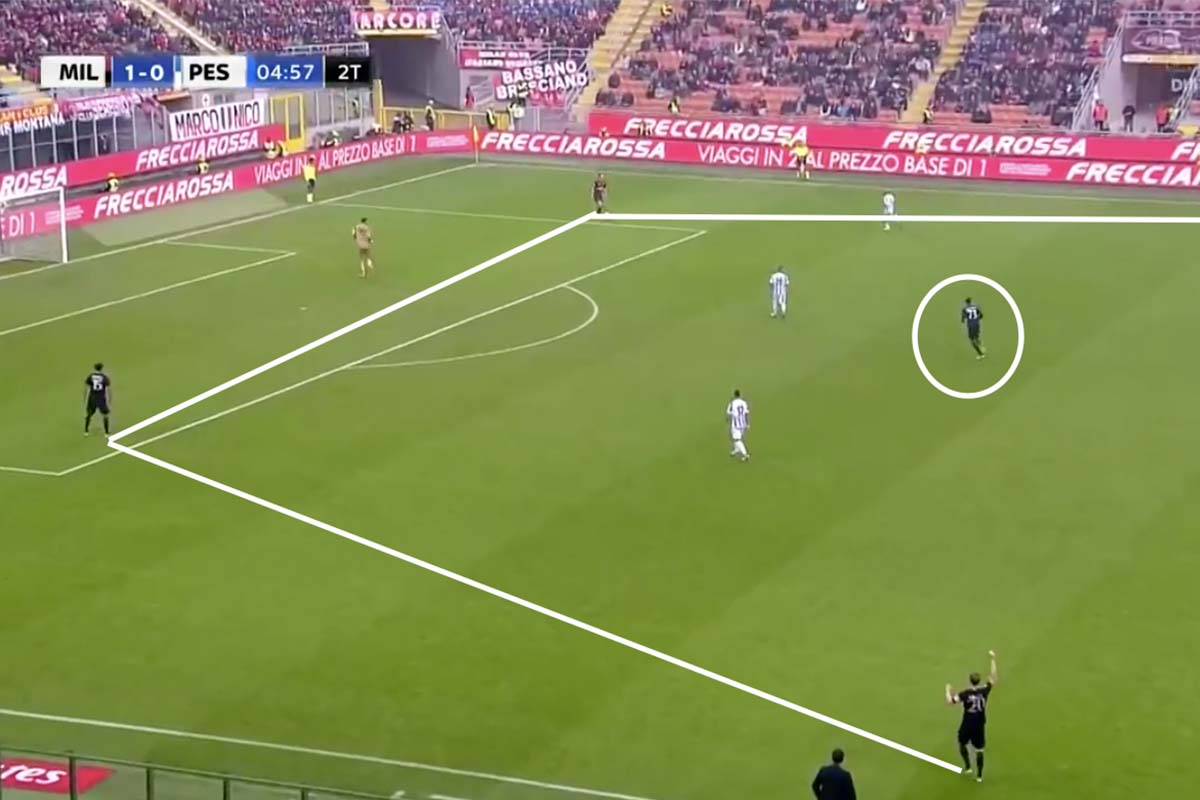 Milan set-up to make use of Alessio Romagnoli’s ball playing ability in defence. The above picture shows how Milan position themselves for a goal kick as they look to build play from the back. As you can see the centre-backs split to the edge of the area, the full-back’s push on and Locatelli drops a little to be the third point of a triangle with either flank. Milan look to spread their players to create space centrally as the opposition attempt to shut them down.

Romagnoli, who signed from Roma in a deal worth a reported €25 million, averages 52.2 passes per 90 and completes 86.8% of them. He’s instrumental in Milan’s build up play from deep. 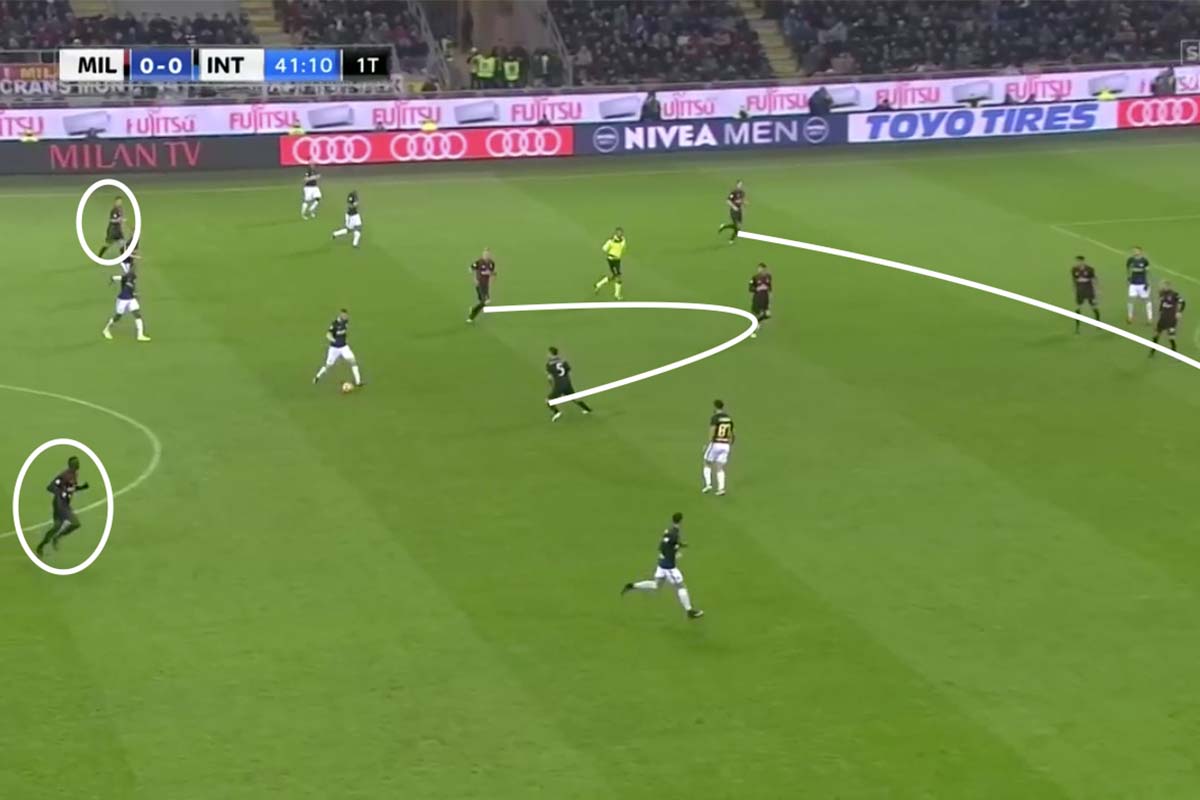 The above picture shows Milan’s shape when defending in their own half. You can clearly see the four defenders in a line, Locatelli as the deepest midfielder with Kucka and Bonaventura ahead. Suso and Niang, circled in white, are dropping deeper to support the defence. You’ll notice Milan are compact and narrow with effectively three lines of defence behind the ball. They’re dictating the space and forcing the opposition to use the flanks. 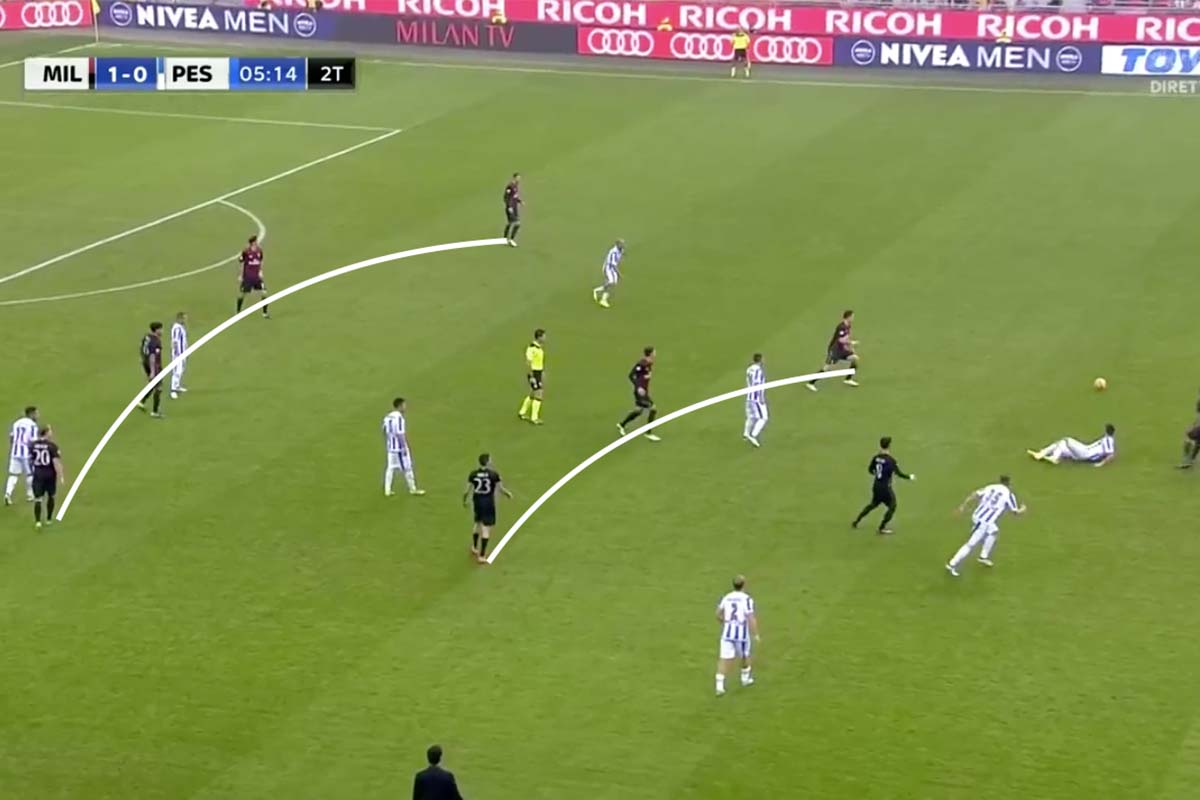 Again the Milan shape is there for all to see. In this picture It’s Suso and Carlos Bacca who have tracked back to dispossess the opposition. The same Suso who was considered to be a luxury and not hardworking enough while at Liverpool. He’s bought into Montella’s philosophy and he’s doing his part defensively as well as offensively. In the picture you can again see how compact and Milan become as soon as the opposition get into their half. In this instance it’s seven Milan players behind the ball. They’re not as defensively solid as the famous Milan sides of old having conceded 17 in 13 league matches, but Montella has went about installing discipline and structure to his side and you can see that by their shape. 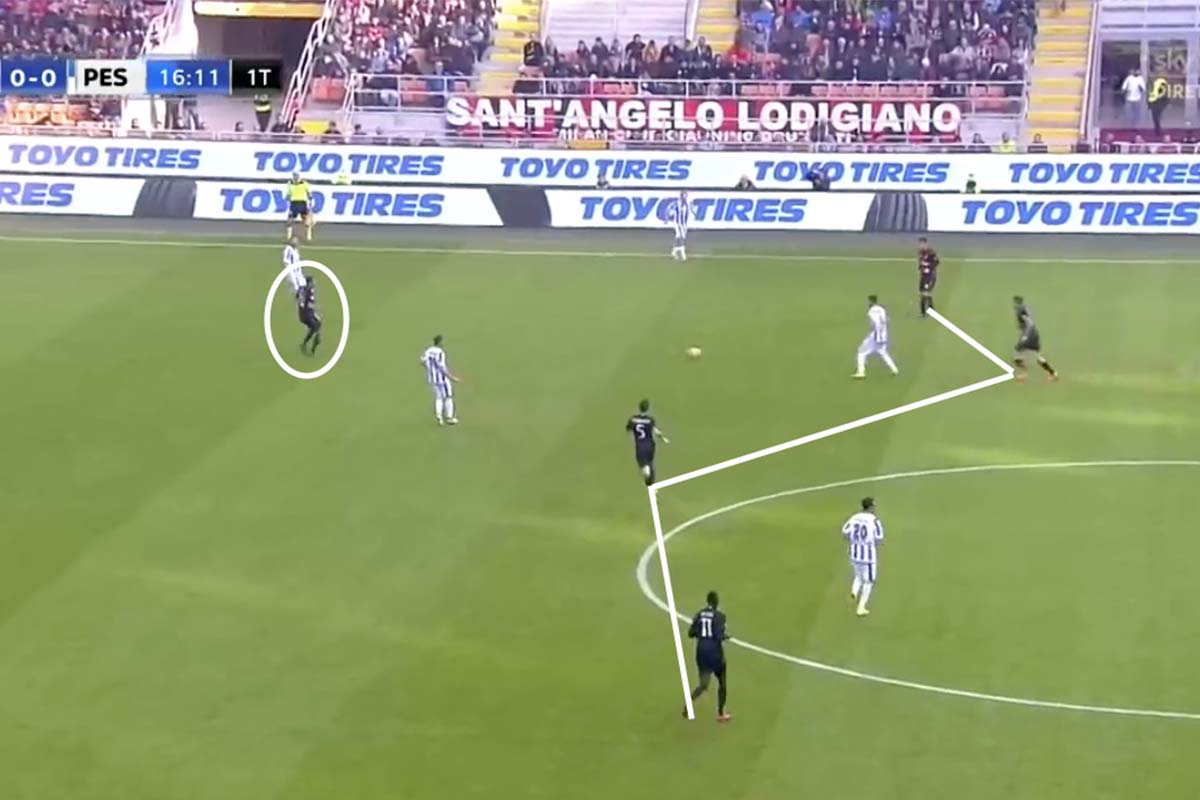 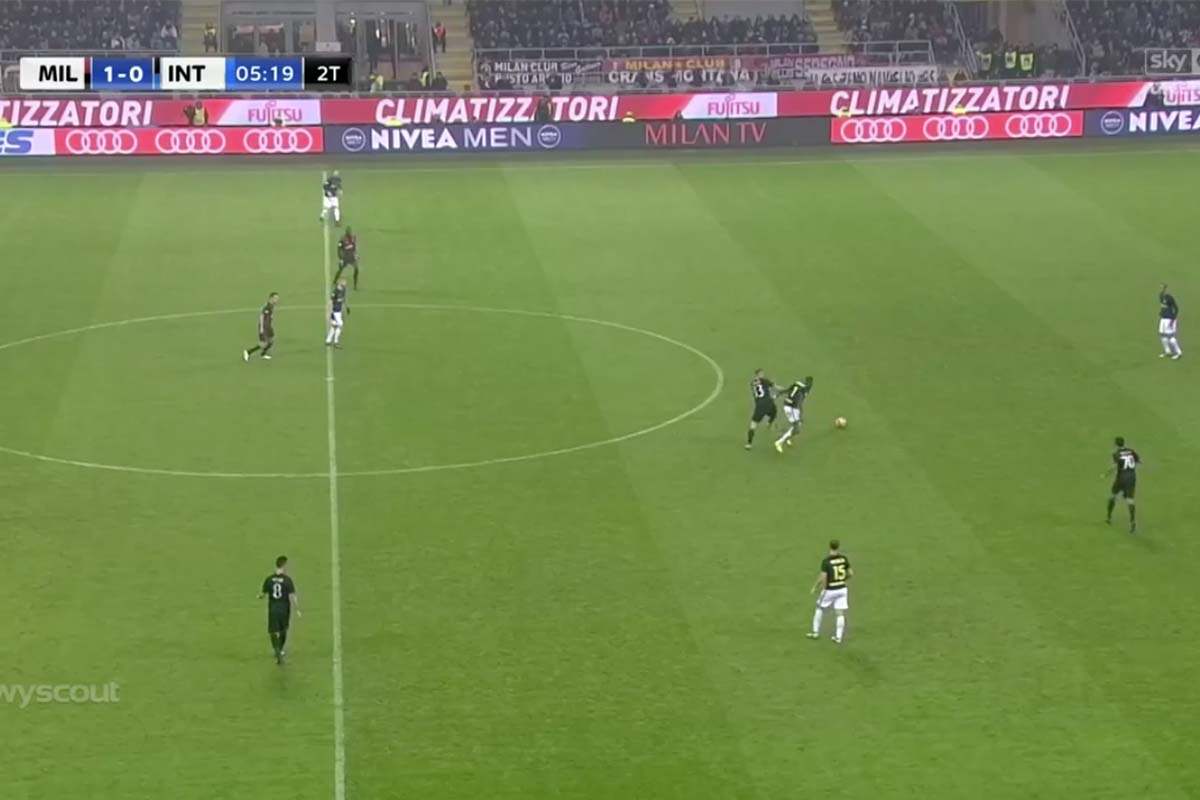 In the above two pictures we see how Milan look to contain the opposition when they’re trying to build from the back. Suso and Niang will drop back in line with the two advanced central midfielders and their formation almost becomes a 4141 formation. One or both of the centre-midfielders push on to press the opposition along with Bacca. It’s important that both Suso and Niang don’t ignore their defensive responsibilities so to make sure Locatelli and the defence aren’t exposed if the opposition bypass the press. It’s a well drilled system. 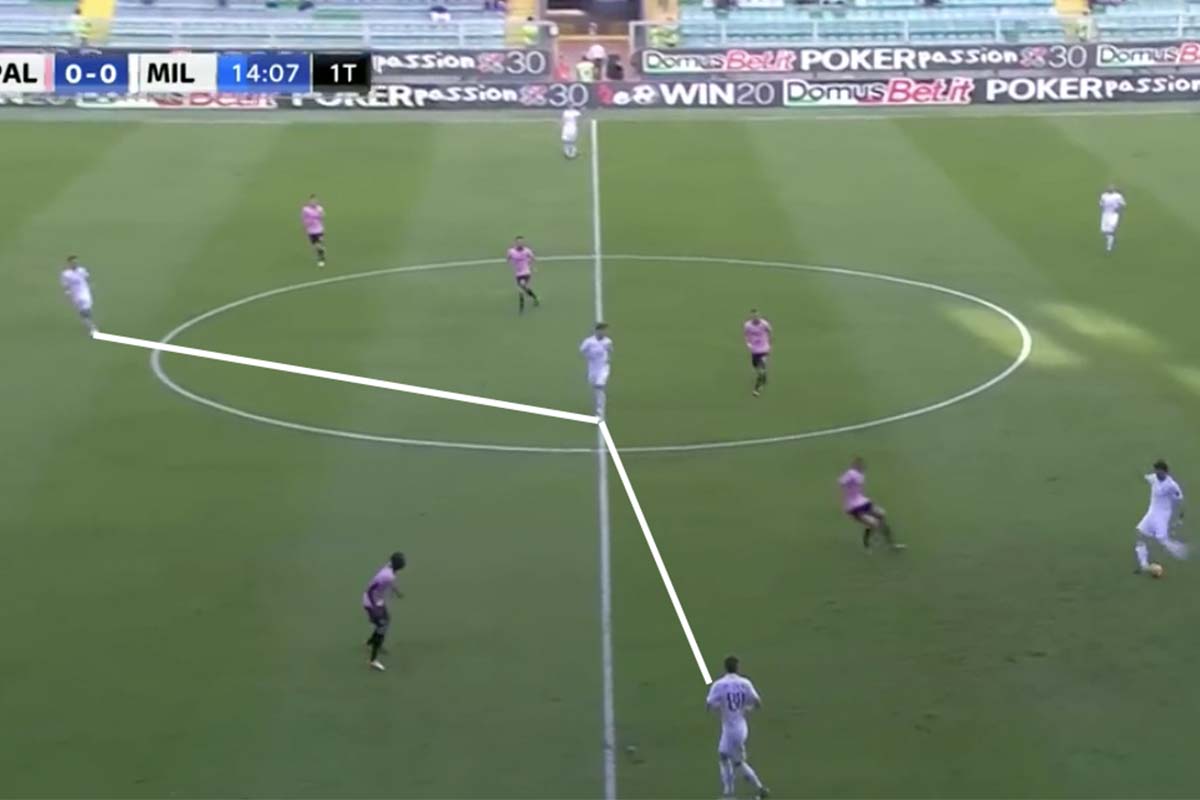 An interesting observation during phases of the Milan build-up show the creative side of Montella. In the picture above the three man midfield is joined by white lines. Mario Pasalic has taken up the position you’d usually associate with the full-back. The midfielder, who is comfortable dribbling in tight space, gives Milan a greater chance of being able to play out from the back. At the same time it pushes De Sciglio up the pitch and allows Niang, the left attacker, to come centrally and support Bacca. It’s a tactic Milan use on both flanks as they look to get the midfielders involved.

This isn’t the Milan of yesteryear but Montella is going about rebuilding them the right way. He’s not pinning his hopes on star players, instead he’s looking to build a team as he tries to get them back into Europe. So far it’s going well. Montella’s favoured attack of Susu, Niang and Bacca have scored 13 goals between them and the midfield three of Locatelli, Bonaventura and Kucka have five goals. They’re sharing the goals and sharing the defensive responsibility. They’ve already beaten Juventus this season and they currently sit in 3rd position in Serie A, seven points behind Juventus and behind 2nd place Roma on goal difference. Montella’s new look Milan could be be in Europe next season.