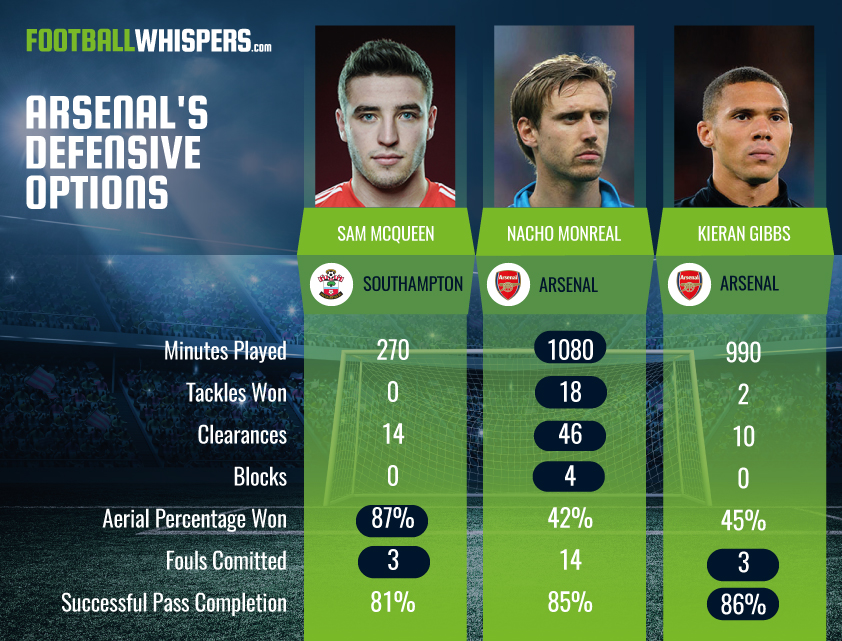 Arsene Wenger is often accused of being stubborn. Some people cite that as the reason behind why Arsenal haven’t won the Premier League title since 2004 despite having talented squads at various stages throughout this time. The common complaint seemed to be Arsenal had a soft centre, a complaint backed up by the numerous times big teams put them to the sword over the years, and a lack of match winners within the squad.

It was all beauty and no beast.

However, the 67-year-old has slowly gone about assembling a squad capable of competing. He’s gave the age old 4231 a face lift. He’s added the likes of Shkodran Mustafi and Granit Xhaka, the beasts, to his beauties, Alexis Sanchez and Mesut Ozil. So far this season Arsenal have looked like a different prospect entirely.

Wenger spent a combined £70 million to secure the services of Mustafi and Xhaka and despite the pair being being brought in to shore up the defence it’s had an impact on the attack. At their current scoring rate they’re on course to score 89 for the season and concede just the 38. A marked increase on the 65 they scored last season. It would be their most goals in a season since 2009/2010 and it would be their highest goal return in a Premier League season ever, surpassing 09/10 (83), 02/03 (85) and a Thierry Henry inspired 04/05 (87).

While the current Arsenal squad isn’t comparable in terms of talent to the 2004/05 squad, what has been similar is how so far this season the goals have been spread throughout the team. Thierry Henry, Robert Pires, and Freddie Ljungberg all hit double figures in the Premier League. There’s no reason Alexis Sanchez, Theo Walcott, Mesut Ozil and Olivier Giroud couldn’t replicate that in this current campaign.

Arsenal play a very fluid 4231 system which changes depending on the build-up phase. It’s this which makes them so difficult to defend against. If they look to build from the back the three behind the striker are compact and narrow with the full-backs offering the width but if they look to break quickly the wide forwards hold the width and look to isolate the opposition’s full-backs. 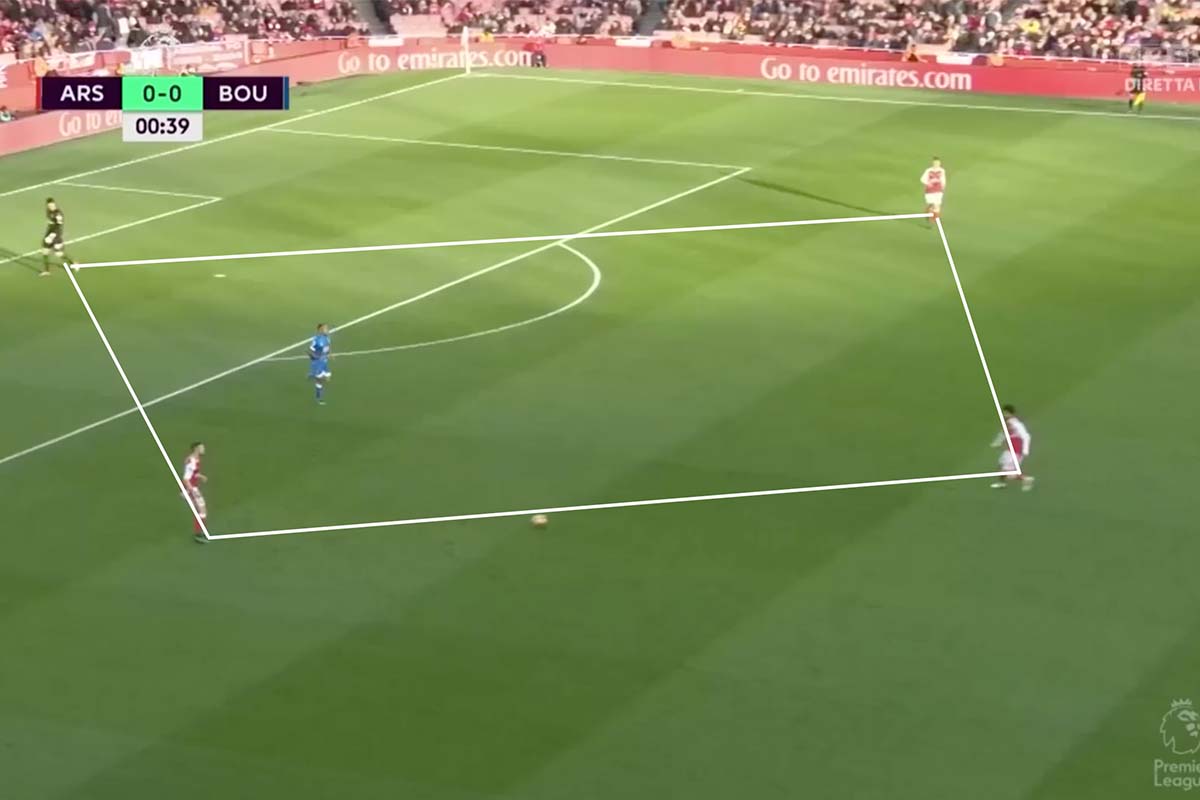 In the picture above, taken from Arsenal’s 3-1 victory over Bournemouth, you can see the centre-back pairing Mustafi and Koscielny have split to give Cech passing options and Mohamed Elneny has dropped to make a diamond. 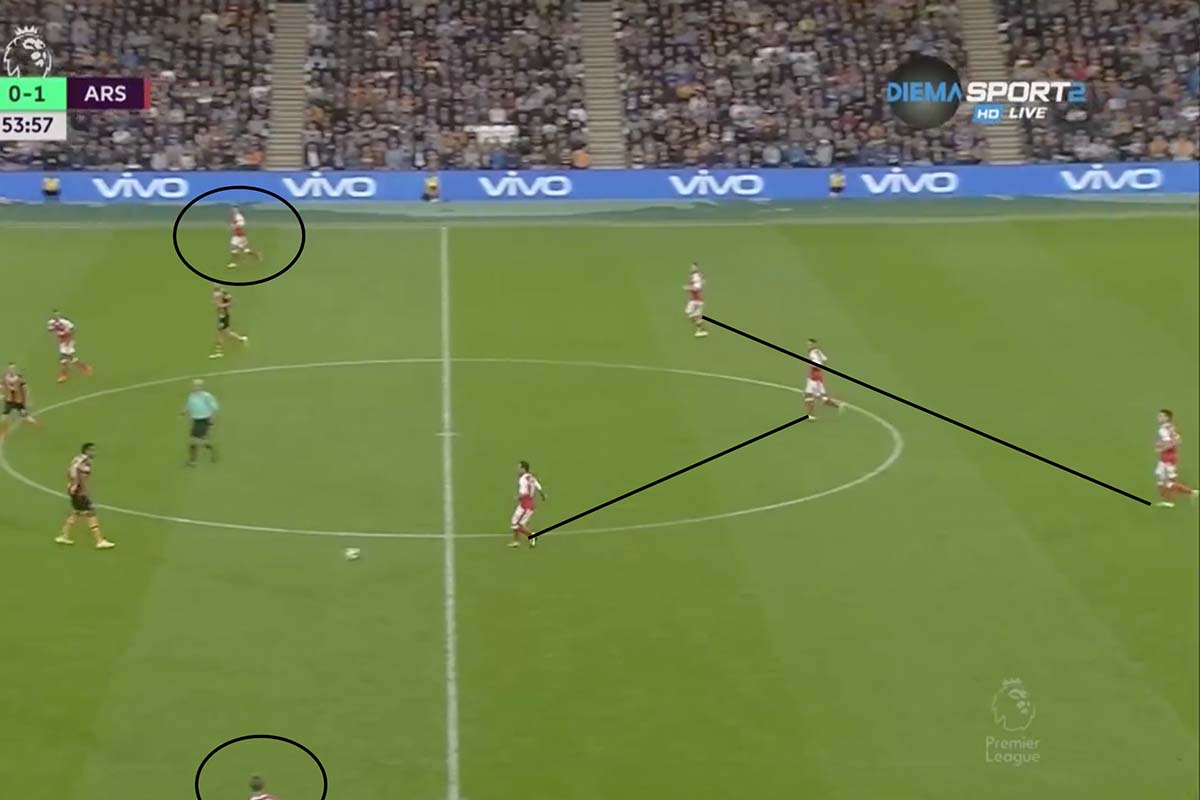 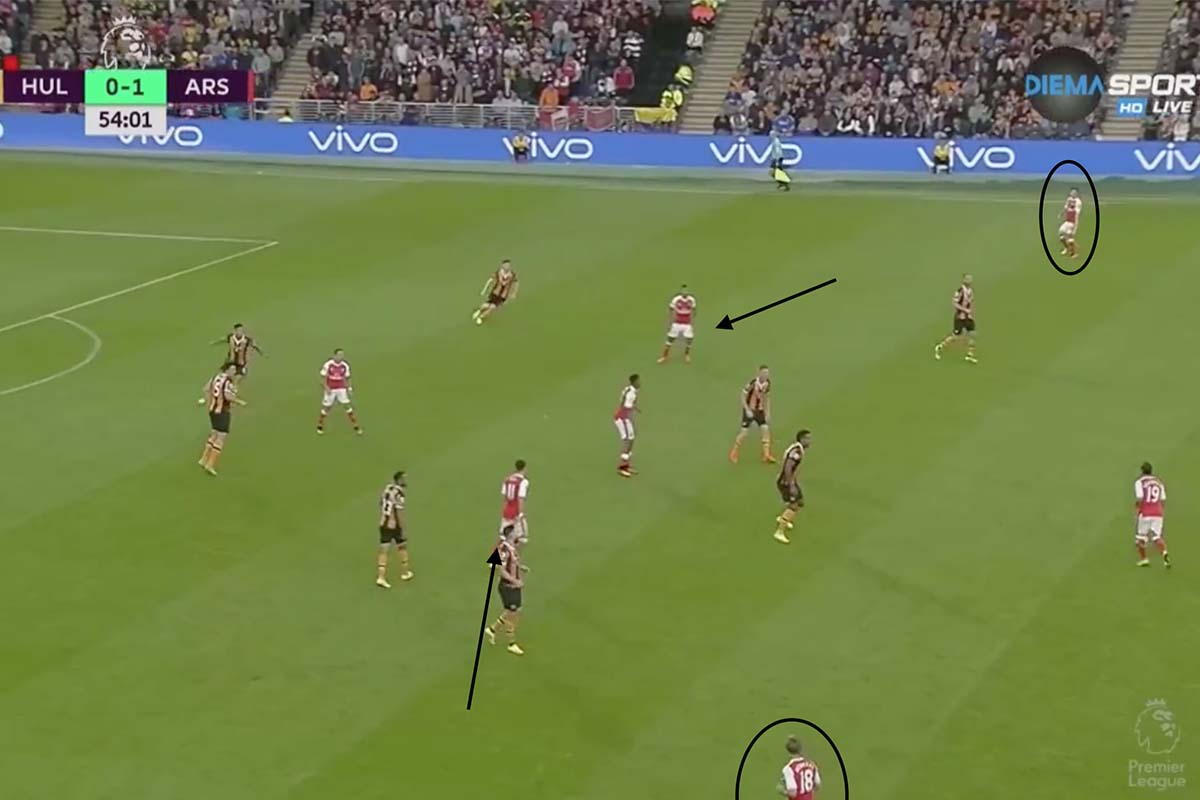 In the two pictures above, taken in Arsenal’s win against Hull, you get to see the picture when the Gunners build from the back. In the first picture you see the centre-back pairing and the centre-midfield pairing in a staggered shape but it allows them passing lanes if Hull did press them. The full-backs are both keeping the width and the three attacking midfielders have tucked in for two reasons A) to give the Arsenal full-backs space to attack and B) so Alexis Sanchez, the lone striker, isn’t isolated.

As previously mentioned, the goals in the team are being shared and those selected to play behind the striker are doing more than enough to support him. It would be easy with playing such a fluid system that the striker drops deep and players don’t fill that vacated space and instead goes looking for the ball to feet which makes it easier for the opposition. Arsenal haven’t fallen into that trap though. 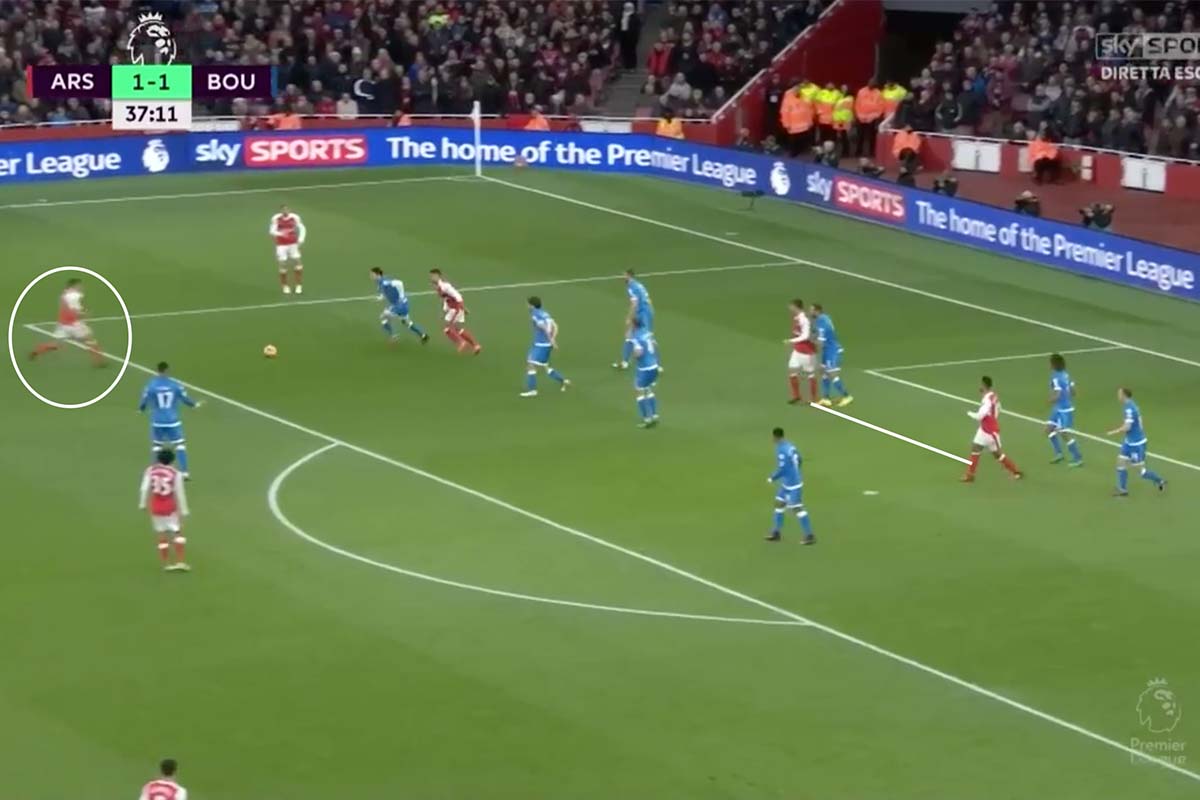 Alexis Sanchez is circled coming onto the ball on the edge of the area. Despite the fact their striker isn’t in the penalty area Arsenal still have three men in the Bournemouth penalty area with both Theo Walcott and Mesut Ozil in central areas. It sounds cliche but if you don’t buy a raffle ticket you can’t win. Alexis Sanchez could fire in a shot it takes a few deflections and one of the Arsenal pair could have a tap in because of the area they’re in. If they aren’t there there’s less of a chance Arsenal can score from this situation. They’re taking risks and they’re getting their rewards in the form of goals. 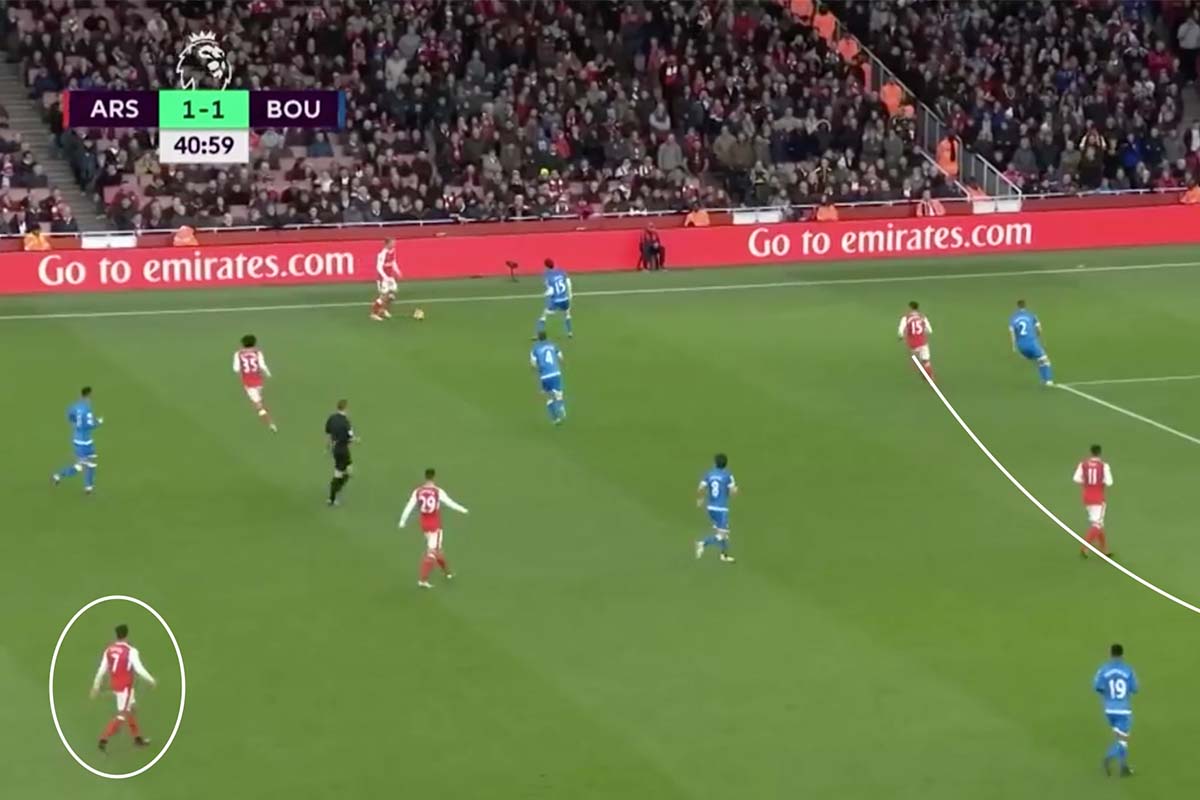 Once again in the picture above we see Alex Sanchez in a deeper role but Arsenal have all three attacking midfielders narrow and compact to keep the Bournemouth defence occupied and pinned back which allows more space for the Arsenal midfield to play in and carve out chances. They’re only allowed to do this though because the attacking midfielders are all showing attacking intent. Instead of just considering themselves to be creators they’re now goalscorers.

The Importance of Theo Walcott

Theo Walcott started the season with a real purpose in his play. He looked reinvigorated. With Alexis Sanchez popping up all over the place it’s his responsibility to exploit the space the Chilean leaves behind. He’s excelling in this role. 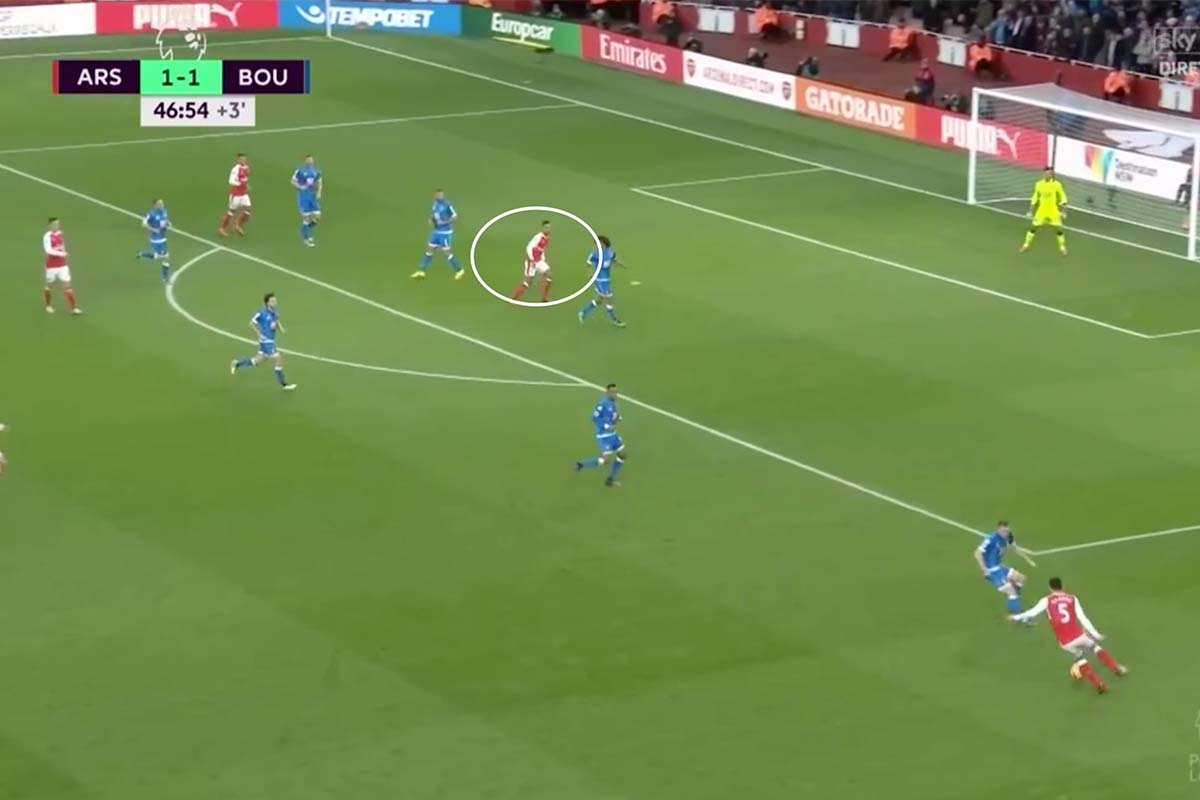 The position he’s taken up in the above picture is one you’d usually associate with a striker. He’s positioned himself between the centre-backs and is occupying the pair of them. If the ball comes in from Gabriel, Walcott is in an ideal position to get on the end of it. He not only fills that role he actually looks comfortable there and both player and team are benefitting. 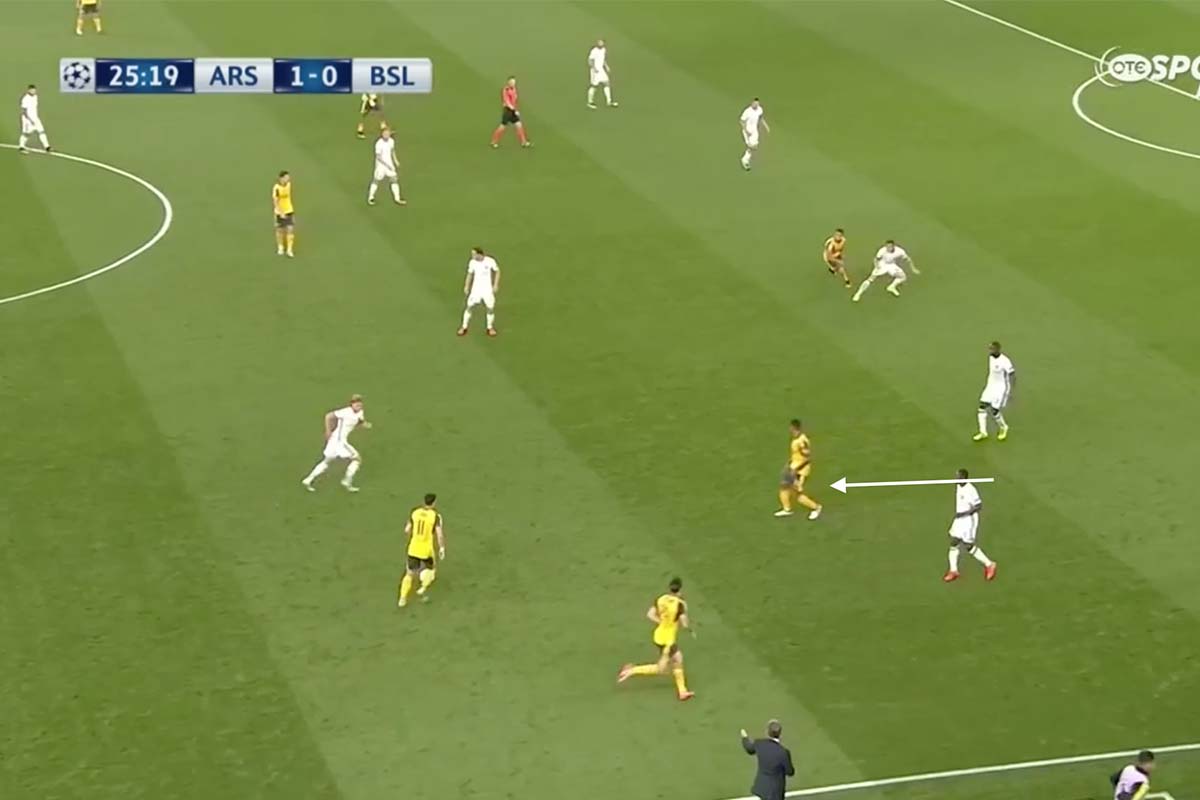 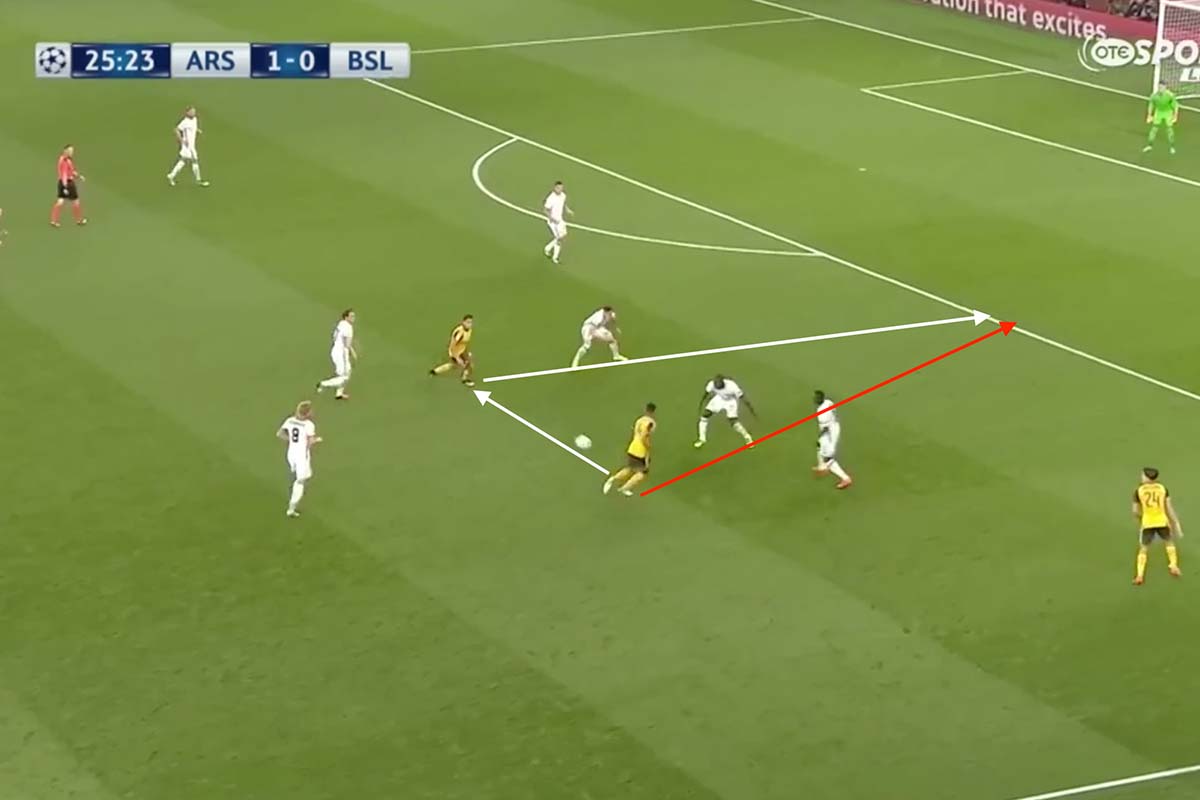 In the two pictures above you see what a confident Walcott can do. He drifts into space from his right hand side position to come short for the ball to feet. He spins on the ball and runs at the Basel defence. He then releases the ball to Sanchez and carries on his run, exploiting the poor Basel defensive line, to get on end of Sanchez’s return ball. He drives into the Basel penalty area and finishes emphatically. It was unnerving finish and showed just how far Walcott’s game has come on.

Where can Arsenal upgrade?

A recent article on Football Whispers highlighted Arsenal’s struggles at left-back which can be found here. Whether it’s Gibbs or Monreal, crosses are allowed to come in from the Arsenal left and many goals seem to come from that area of the pitch. There’s an argument to suggest perhaps the left side isn’t getting enough protection. That could well be true but given how well Arsenal are doing in attack it’d be counterproductive to sacrifice one of the attackers for a more conservative player able to shield Monreal or Gibbs. Arsenal could just bring in a new left-back who is strong 1 v 1 and who stops crosses getting into the penalty area.

They don’t have to spend millions and it doesn’t have to be an established name. If the profile fits the player should, in theory at least, excel. One player who may add something to the Arsenal defence is Southampton’s Sam McQueen. The winger-turned-defender has been impressive for Southampton as of late. He’s supporting the attack, using the ball well and considering he’s an attacker by trade he’s good defensively 1 vs 1. He only has 18 months left on his remaining deal and this puts Southampton at a disadvantage. They may be forced to sell in January or the summer to cash in on the player. 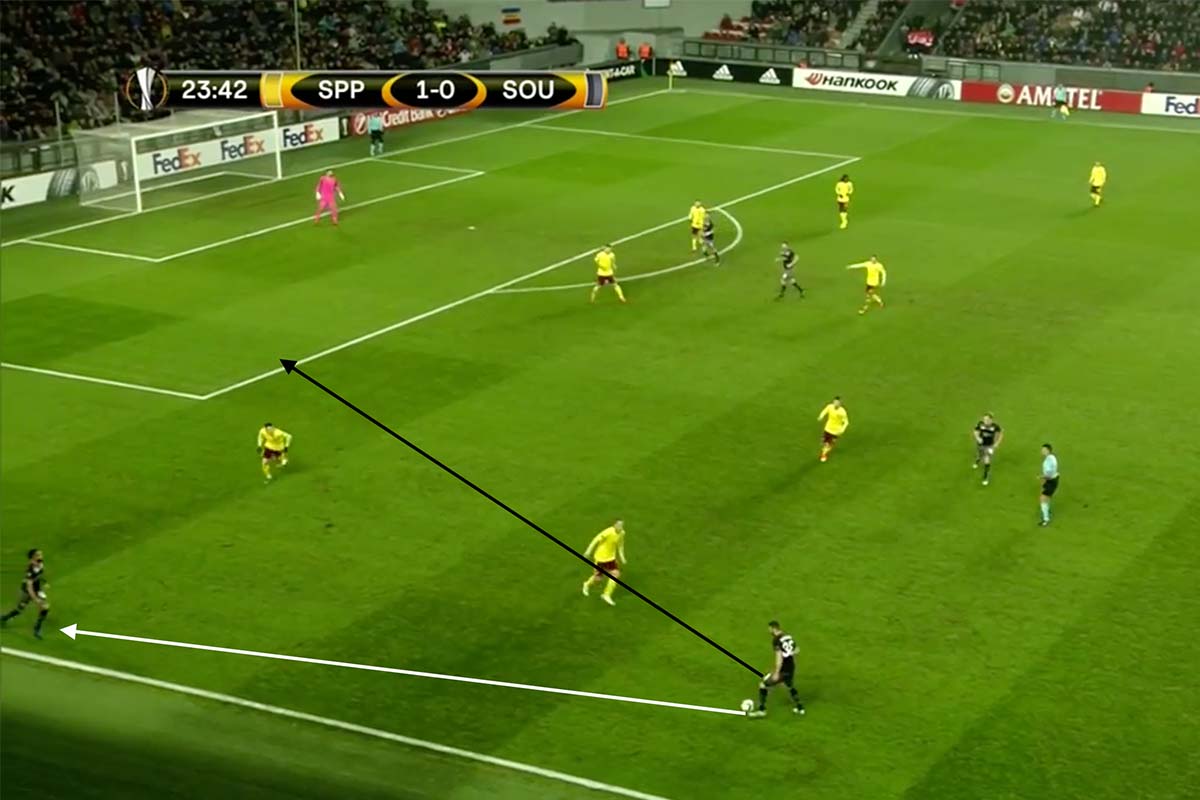 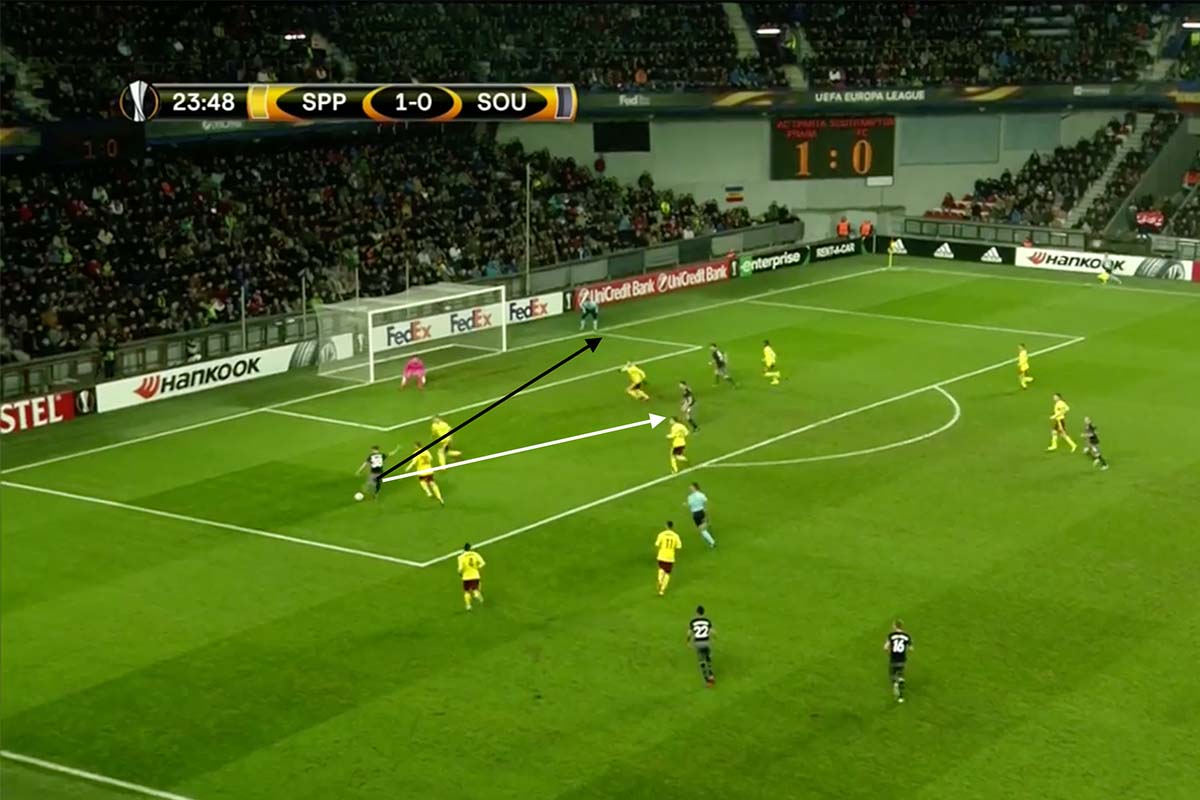 In the two pictures, taken from Southampton’s defeat to Sparta Prague, you see his intelligence both on and off of the ball. In the first picture he’s in possession of the ball. The white arrow shows the pass and the black arrow shows the run McQueen makes. He plays the ball and runs into the space and because he’s a natural winger the position he finds himself in with the ball isn’t foreign to him. He doesn’t get a nosebleed and he doesn’t just fire the ball in. He picks out a pass and the Southampton shot is blocked. He’s only 21-years-old but there’s a mature approach to his style in possession, one that would suit Arsenal. 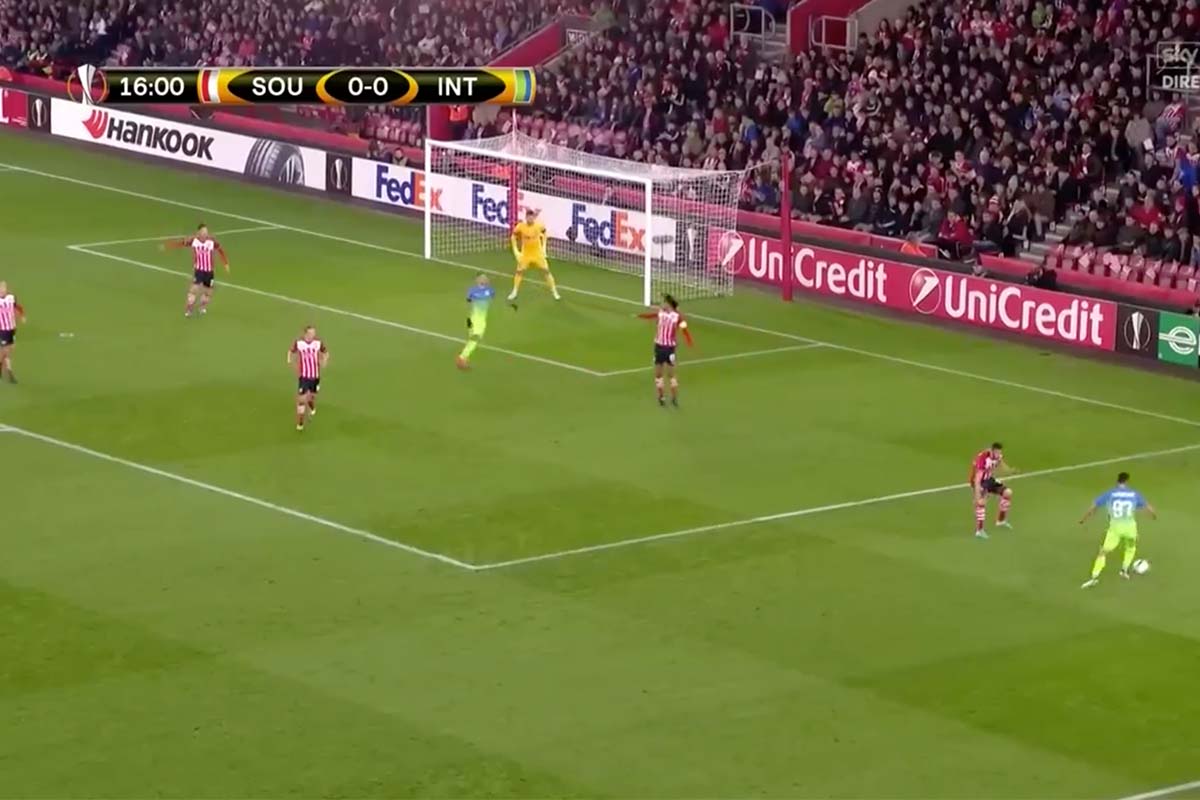 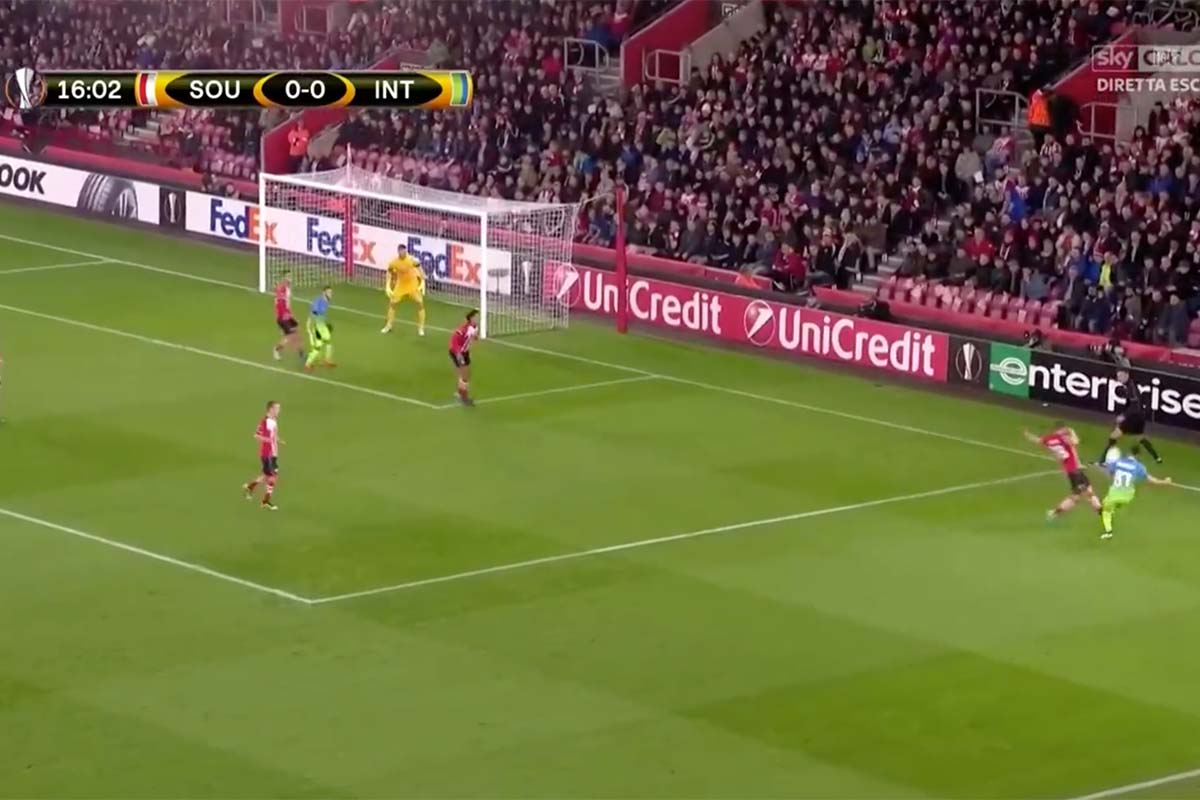 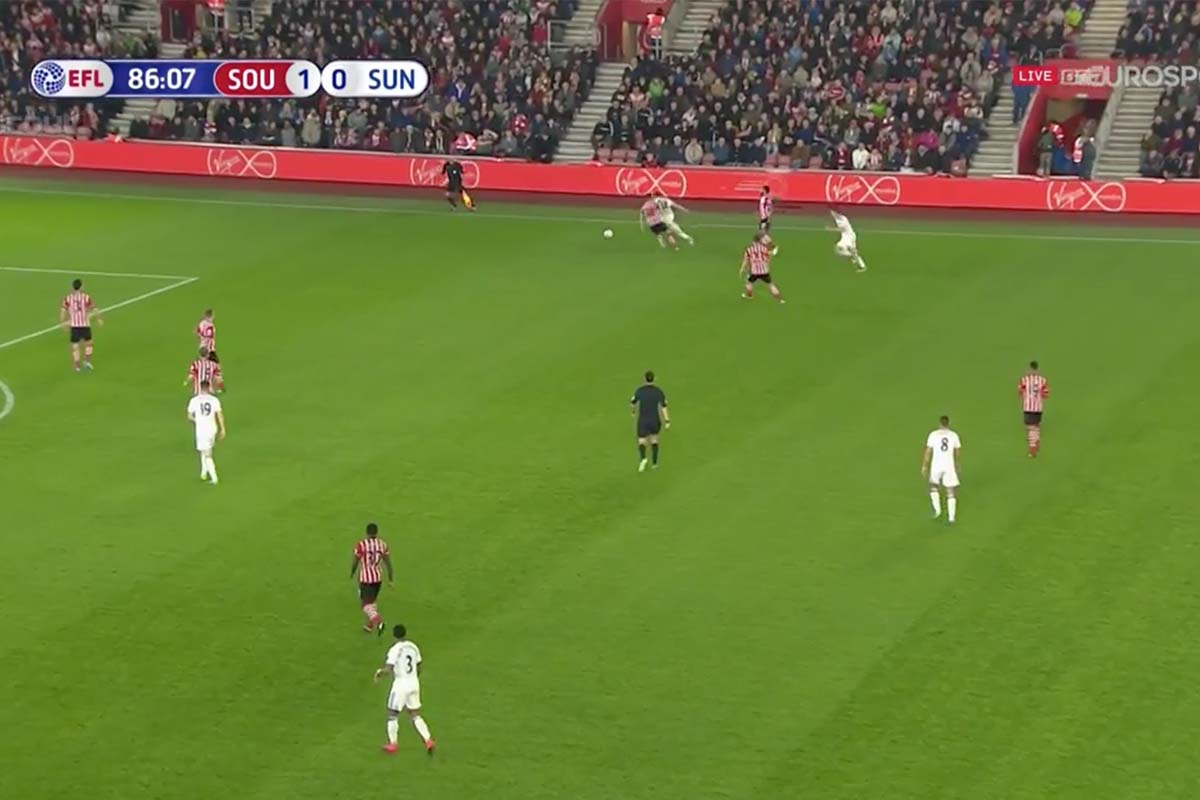 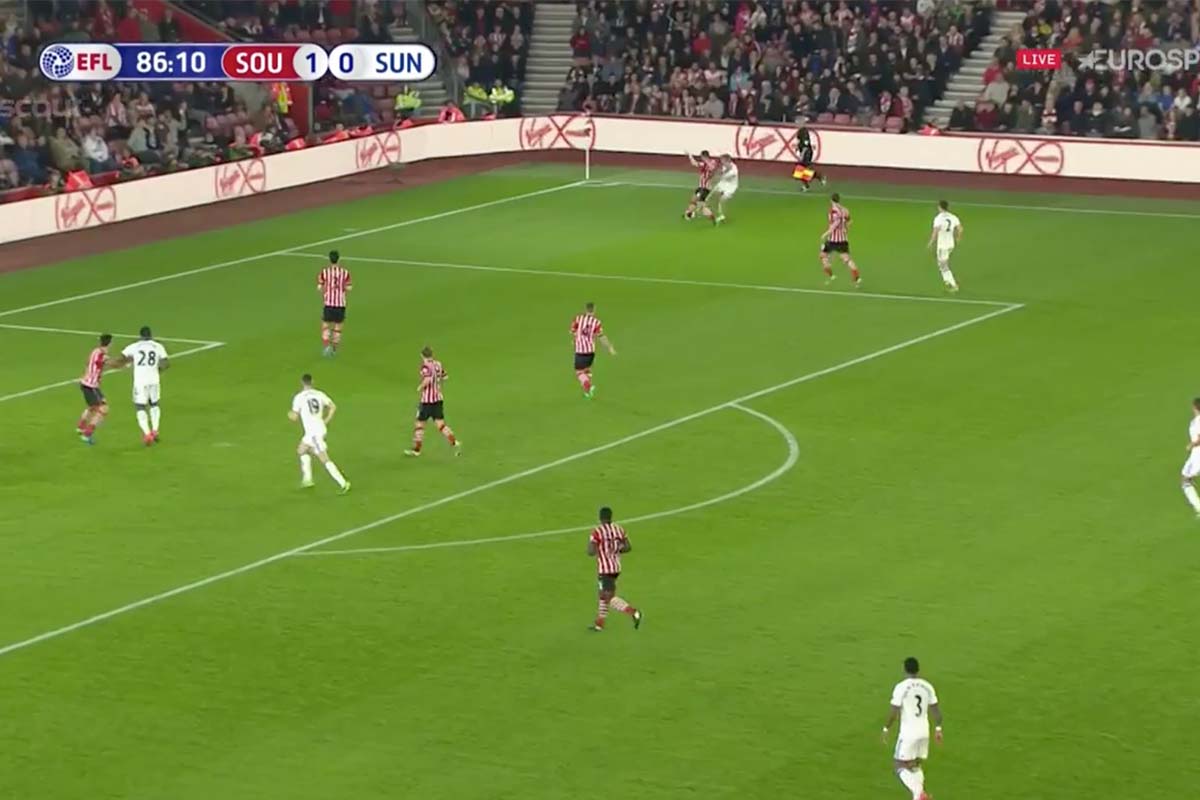 The four picture above, taken from two matches, show McQueen can stop crosses getting into the area. In the first one he initially gives the man space and is careful not to dive in before preventing the cross. In the second one he shows his pace to get back and not only stop the cross he wins the ball back and get’s Southampton on the attack.

He doesn’t see the ball as much as Nacho Monreal at Southampton but he uses it well and is well positioned to adapt to seeing more of the ball at Arsenal. He’s got pace, he’s quite the presence and his delivery from the left is dangerous. He may well be available for under £10 million.