Is it wise for Watford to pin their hopes on nomadic striker Mauro Zarate?

The Hornets are in danger of getting involved in a relegation fight, if they aren’t already in one, after just one win in their last 10 Premier League matches. During this woeful run of form they’ve lost six matches including a 1-0 loss to Sunderland. Walter Mazzarri’s men sit in 14th position but are just nine points clear of bottom of the league Sunderland. 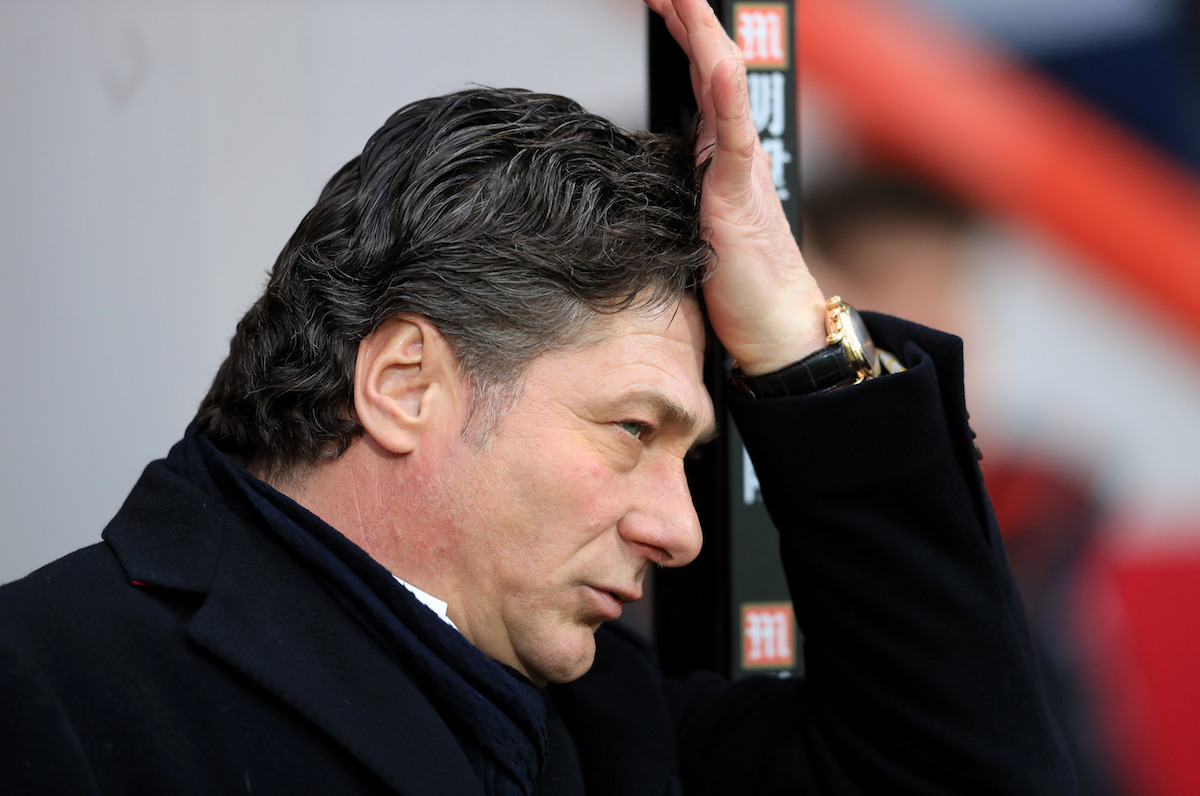 Is the Argentine striker the wildcard which could reinvigorate the season or is he a risk with no reward?

Watford are in need of  player who has the unpredictability factor. Someone who is capable of the unexpected and can win you a game with a moment of pure inspiration. They’re hard to find in January, at an affordable price anyway, but after losing Roberto Pereyra to injury it’s a glaring weakness in their squad. Paul-Georges Ntep was mentioned as a possible replacement for the former Juventus man but he’s since joined Wolfsburg. After links to various players it now appears as though Mazzarri is to raid his old stomping ground, Serie A, to secure Fiorentina’s Zarate. 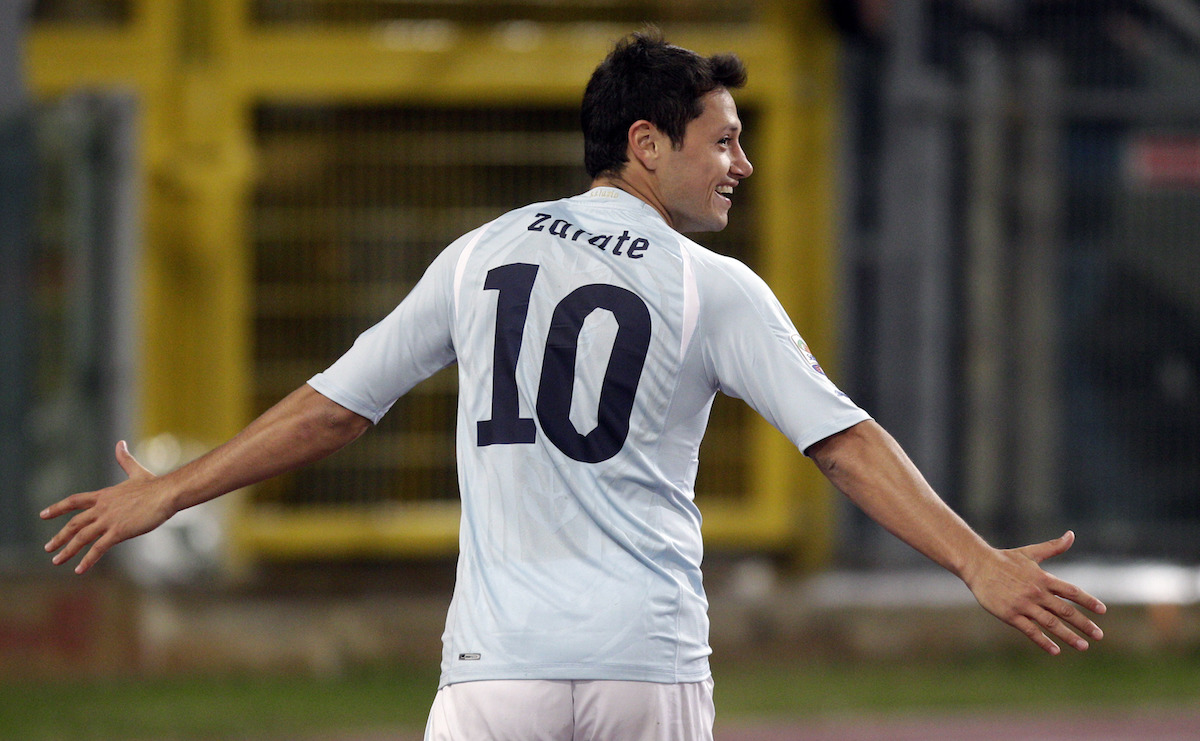 Fans of the English Premier League have been familiar with the 29-year-old since the 2007/08 season when he spent six months on loan with Birmingham. He impressed but the Blues were relegated and the player moved to Lazio.

He spent time on loan at Inter Milan before moving back to his first professional club, Velez Sarsfield. An impressive 19 goals in 29 appearances didn’t go unnoticed and West Ham took a gamble on him at the beginning of the 2014/15 season. It didn’t pay off. After an uninspired loan move to QPR he was once again on the move, this time to Fiorentina with reports suggesting the player took a paycut to force the move through.

However, 18 months with the Serie A club has yielded just seven starts. Even with the uncertainty surrounding the future of Nikola Kalinic, the lead striker for the club, Paulo Sousa is prepared to sanction the deal which sees Zarate move back to the Premier League.

The fee, which is said to be around the £3million mark, shouldn’t be a problem for Watford but wages might be. Zarate is reportedly on £40,000-per-week at Fiorentina. Troy Deeney is the club’s top earner on £50,000-per-week with Valon Behrami on £40,000 and Odion Ighalo on £30,000. These are some of the top players at the club, should Zarate be in that category? He’s taken a paycut to force a move before, perhaps he should employ similar tactics this time around.

What does Zarate offer? 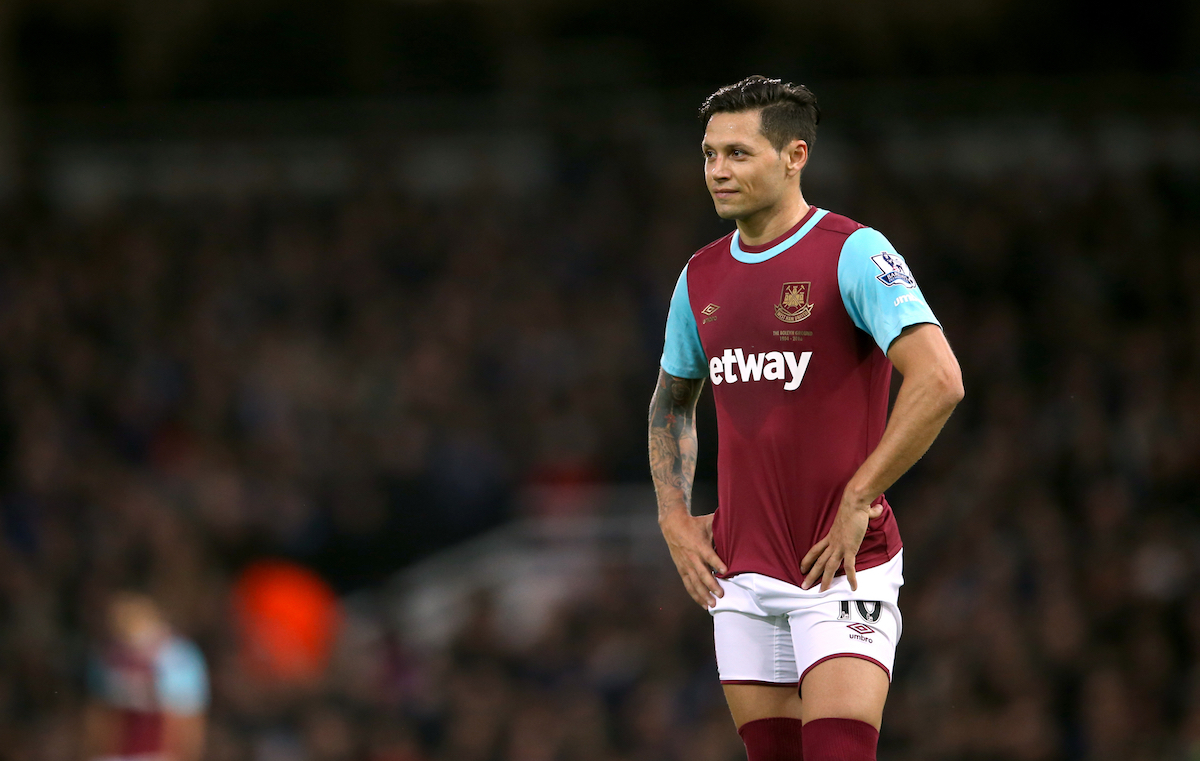 When he’s on his game he’s a stereotypical South American striker. You know the ones who terrorise Premier League defenders? He’s robust, he’s defensively switched on and he’s direct in his play. He looks to get the ball down and just attack players with pace and fearless dribbling. He’s good at avoiding the press and he takes players out of the game with his aggressive style.

It’s hard to really read into his stats much because the sample size is too small but when he was playing regularly for Lazio all those years back he averaged 3.3 completed dribbled per 90 minutes.Nordin Amrabat completes the most dribbles in the Watford squad with 2.4 and only Adama Traore, Eden Hazard and Wilfried Zaha average more than 3.3 in the Premier League. 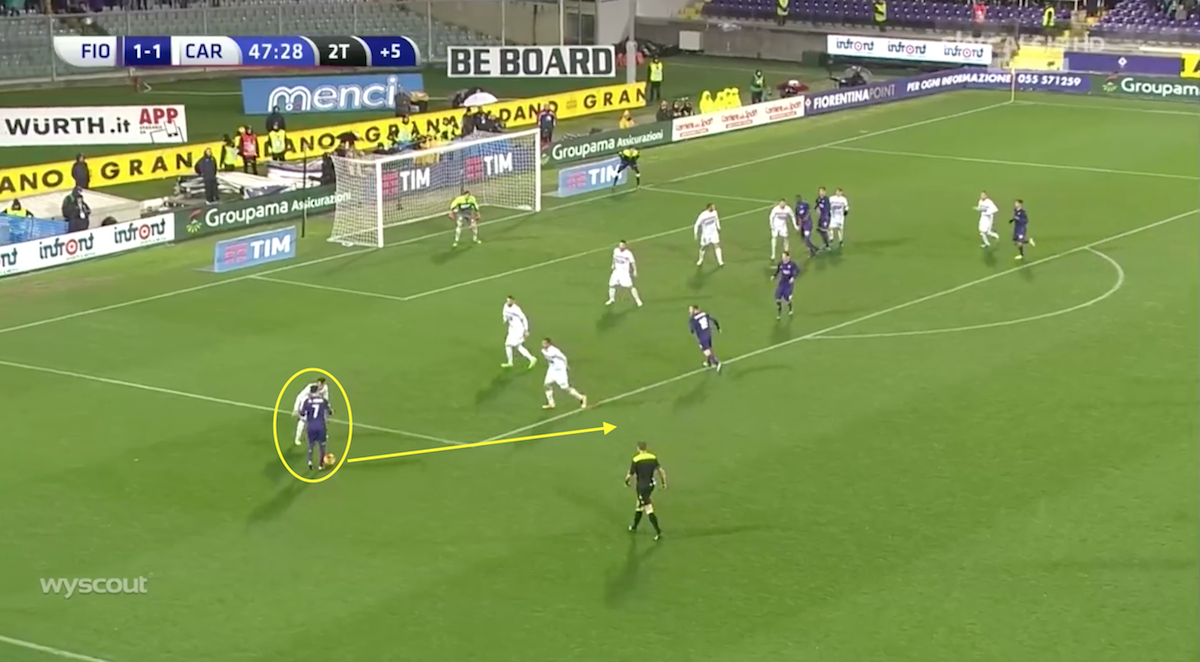 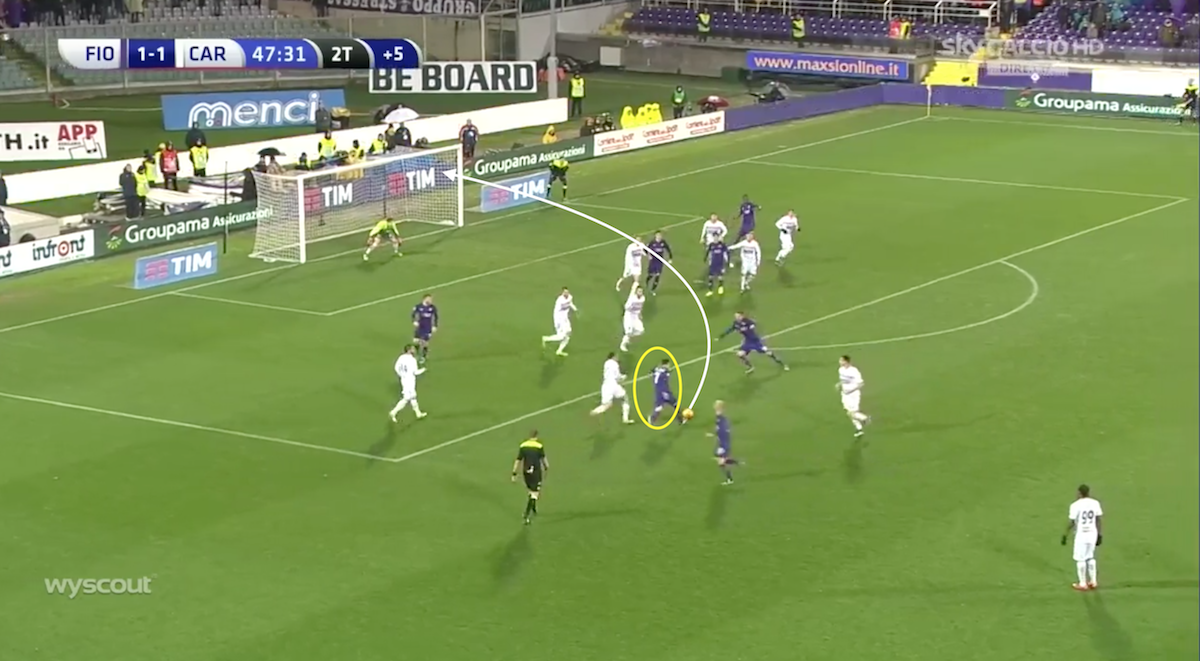 You see his dribbling ability and his aggressive style in the above two pictures. In many ways it's similar to Jerome Sinclair's goal against Burton Albion in the FA Cup. He picks it up and cuts inside before unleashing a curled shot into the goal.

He can use either foot but in the position above he's only going to do one thing. The defenders know it but they can't stop it. It's a trait in his game. He looks to peel away to the left hand side, isolate a defence and then cut inside. Watford fans will know it's something Pereyra likes to do. 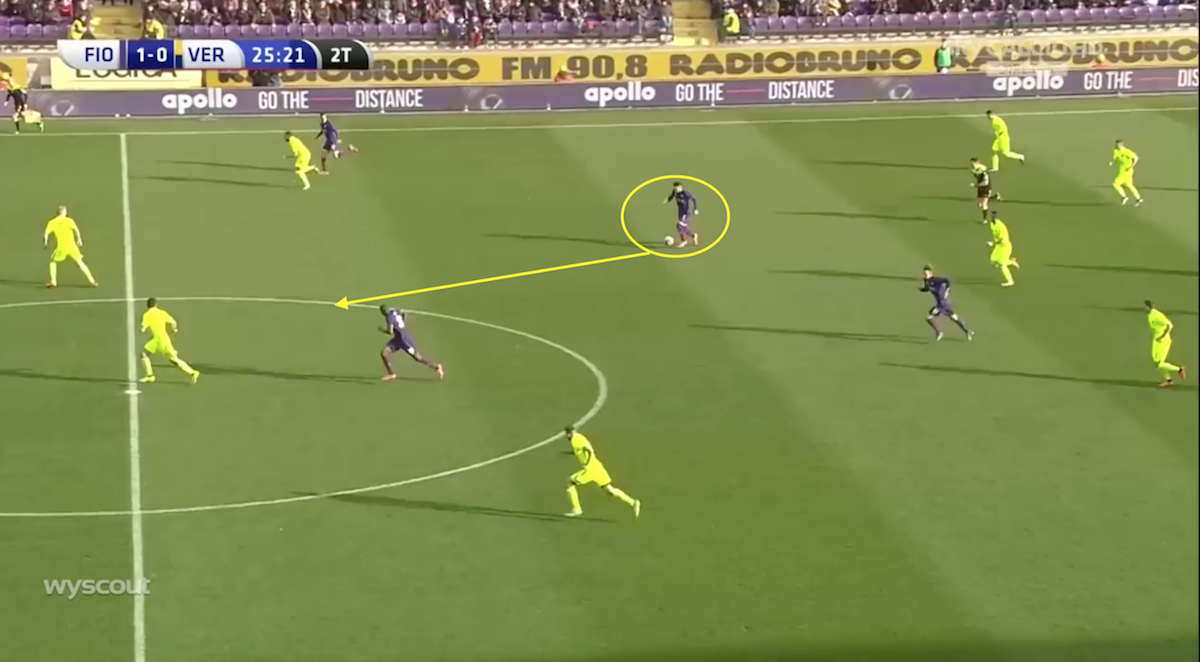 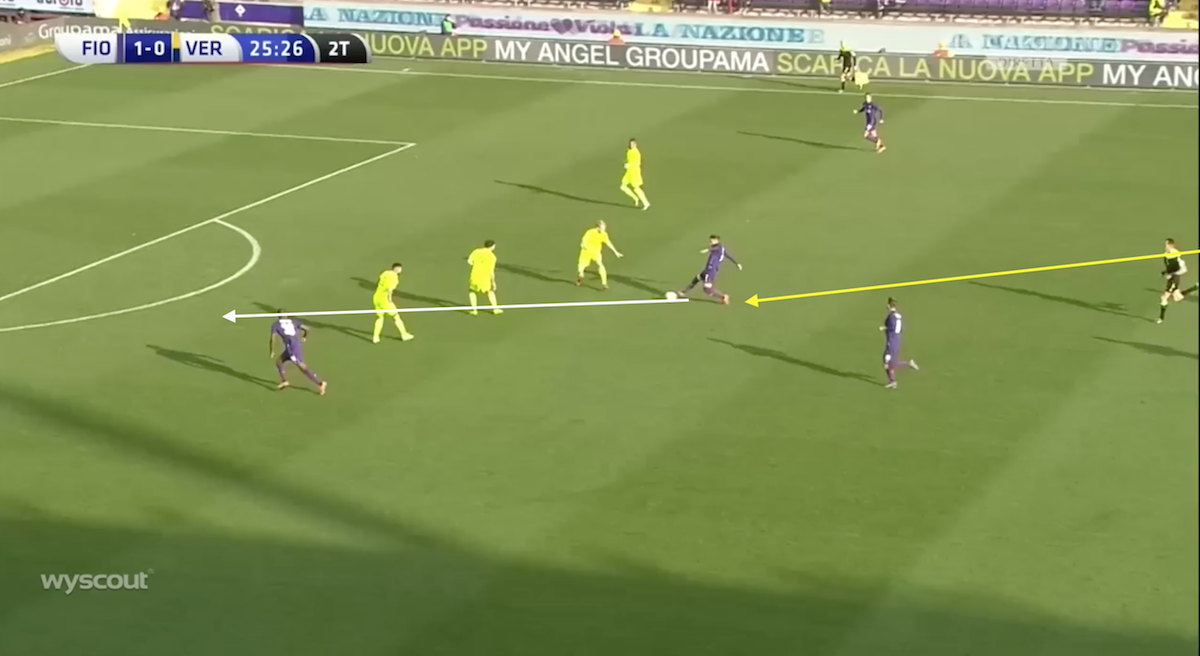 This time around he picks the ball up in a deep area and drives forward into space using his electric pace. He runs directly at the heart of the opposition and forces them backwards. In the second picture you can see all four of those in yellow concentrating on Zarate with Fiorentina players free. He then threads a pass between the defenders and into the path of Babacar.

The pass is a little overhit and forces the striker wide but the ability to play such a pass is a positive and should be applauded. 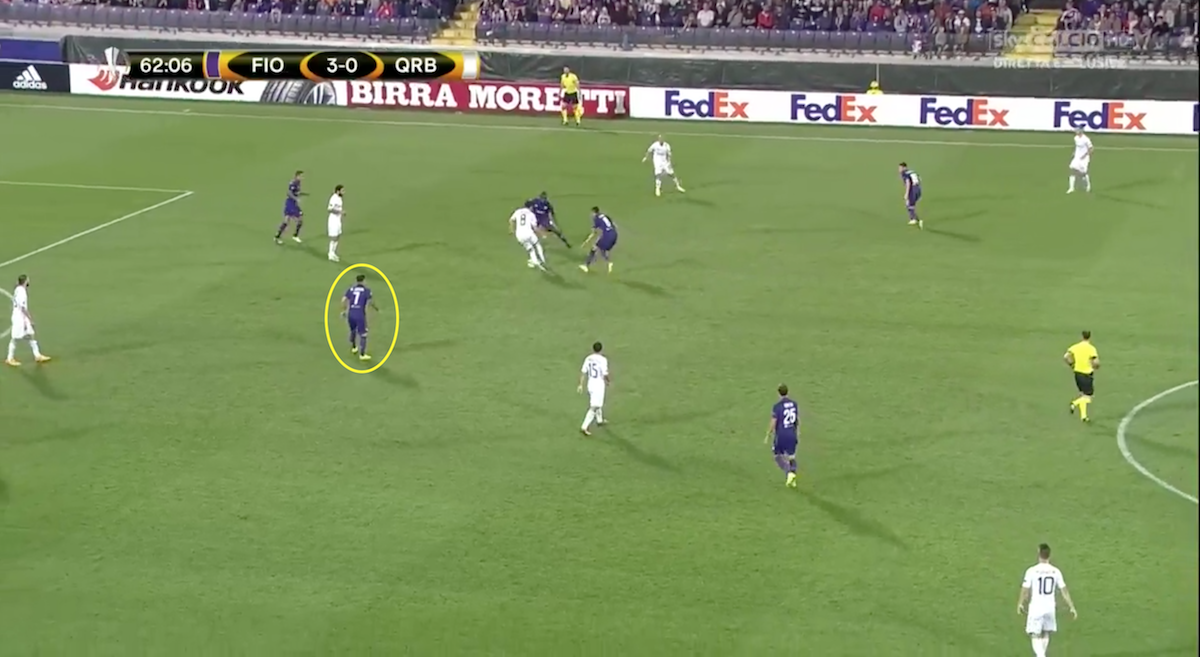 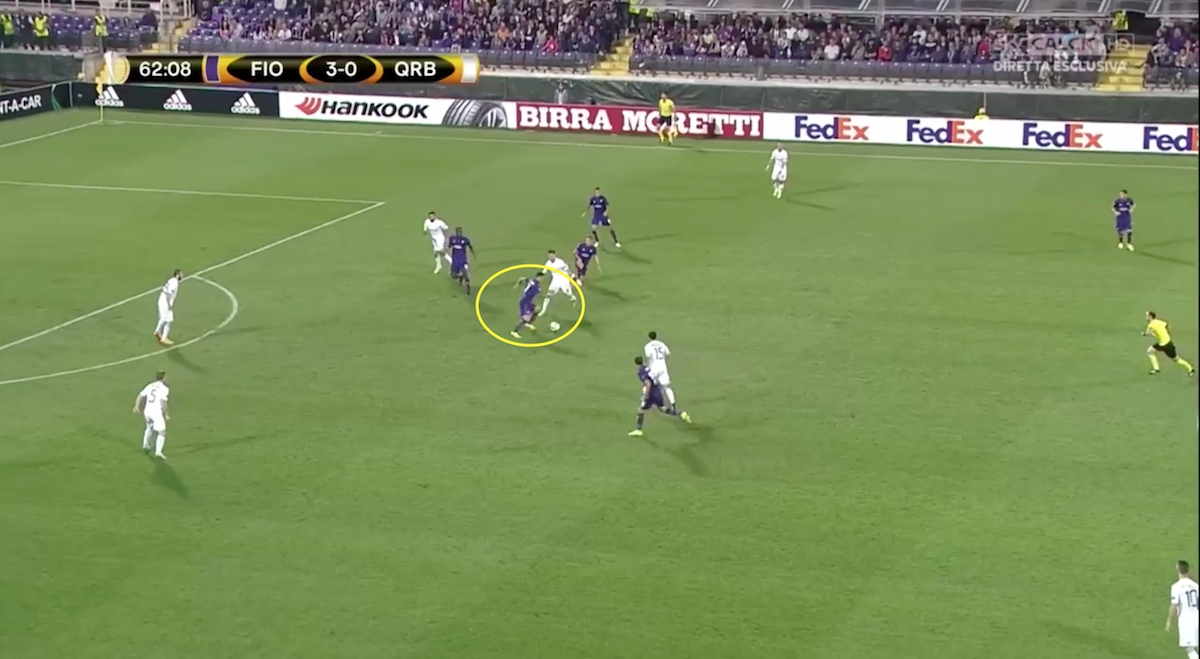 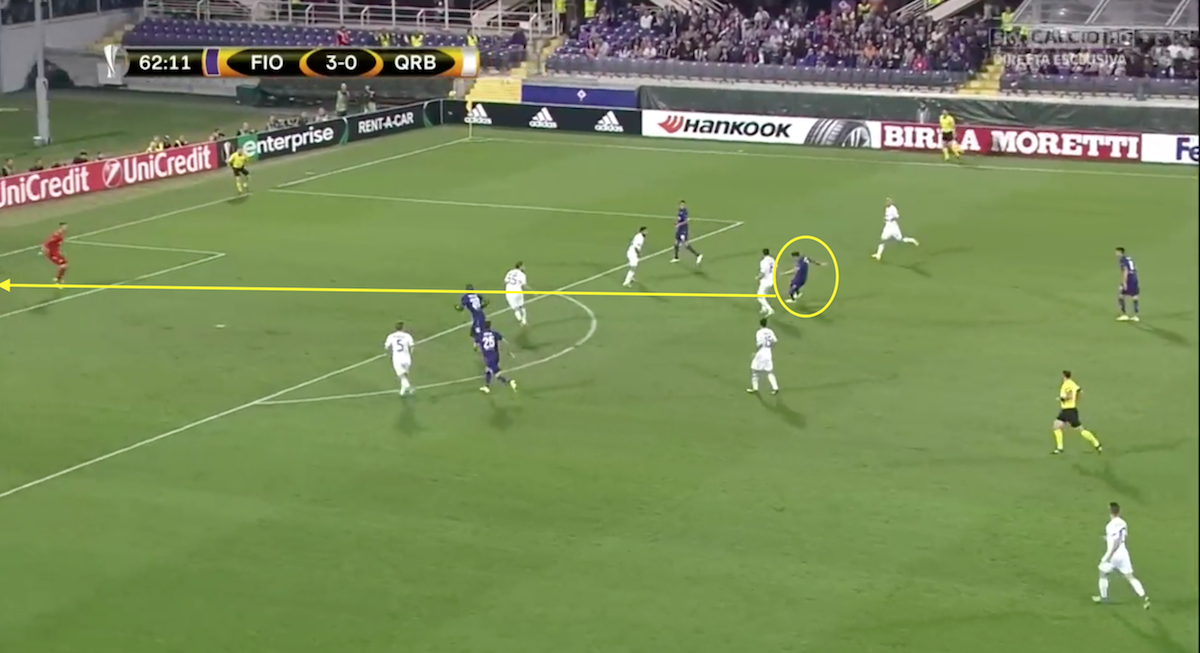 This time around you get to see just how lethal Zarate is. Fiorentina press the ball and the striker positions himself. The opposition's player is tackled and Zarate picks the loose ball up. He then cut's back inside before unleashing a 20-yard drive into the corner which puts his side four goals up to the good. Not many players in this scenario have the ability, technique or the confidence to even try such a shot. It's an explosive finish. 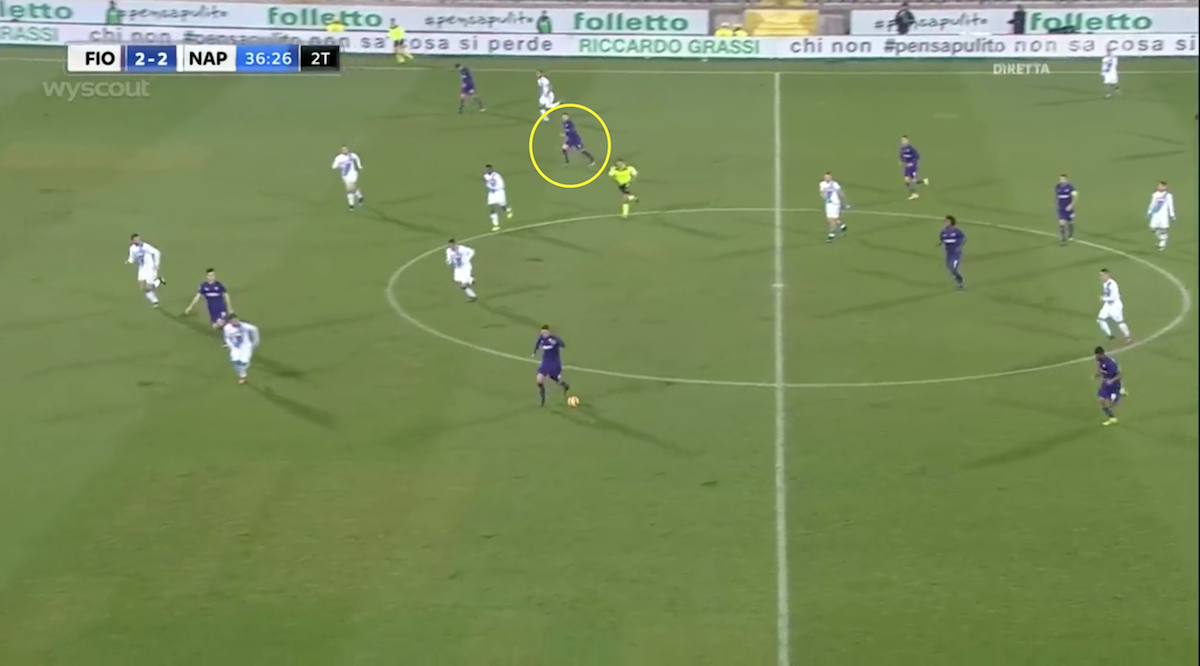 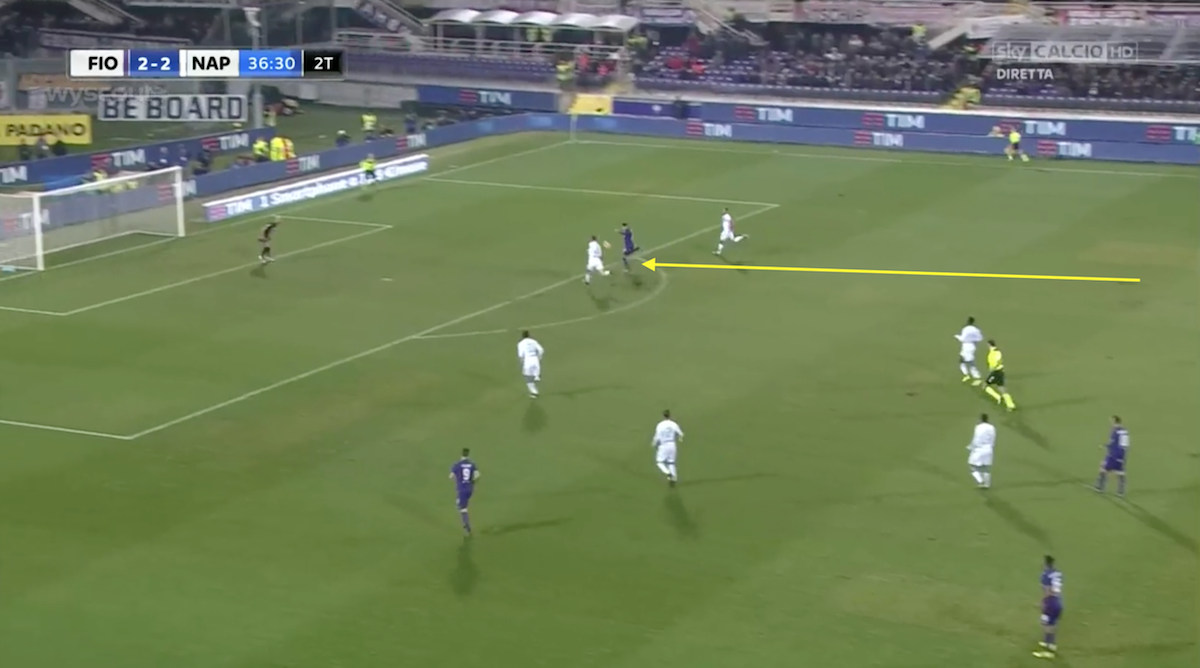 Zarate is circled in the first picture just inside the attacking half as Fiorentina look to build an attack. The man in possession spins on the ball and looks up to see Zarate making a run from deep. He blitzes past the Napoli midfield and gets between centre-back and full-back. He gets on the end of a lofted ball to fire home a fine finish past the hapless Pepe Reina.

That's the ability he has. That's what he can offer a team if he's given a chance in the first team on a regular basis.

A lot of the goals Watford score come from set pieces and it's another one of Zarate's strengths; he can take free-kicks, penalties and corners. They score counter attacking goals too which again plays into the Argentine's traits.

Watford are struggling for goals, with Troy Deeney and Odion Ighalo having just the six goals between them all season, and they have nothing to lose by making him a key part of their team. He has the ability to spark their season into life and £3million in the modern game is nothing.