James Bree is a wanted man.

The 19-year-old is currently being courted by Tottenham, Arsenal, West Ham, Southampton, Manchester United, Aston Villa and Manchester City. The Daily Mirror believe the latter club are frontrunners for his signature whereas the Sun claim Steve Bruce is fronting the queue and is prepared to pay £4million to bring the right-back to Villa Park. 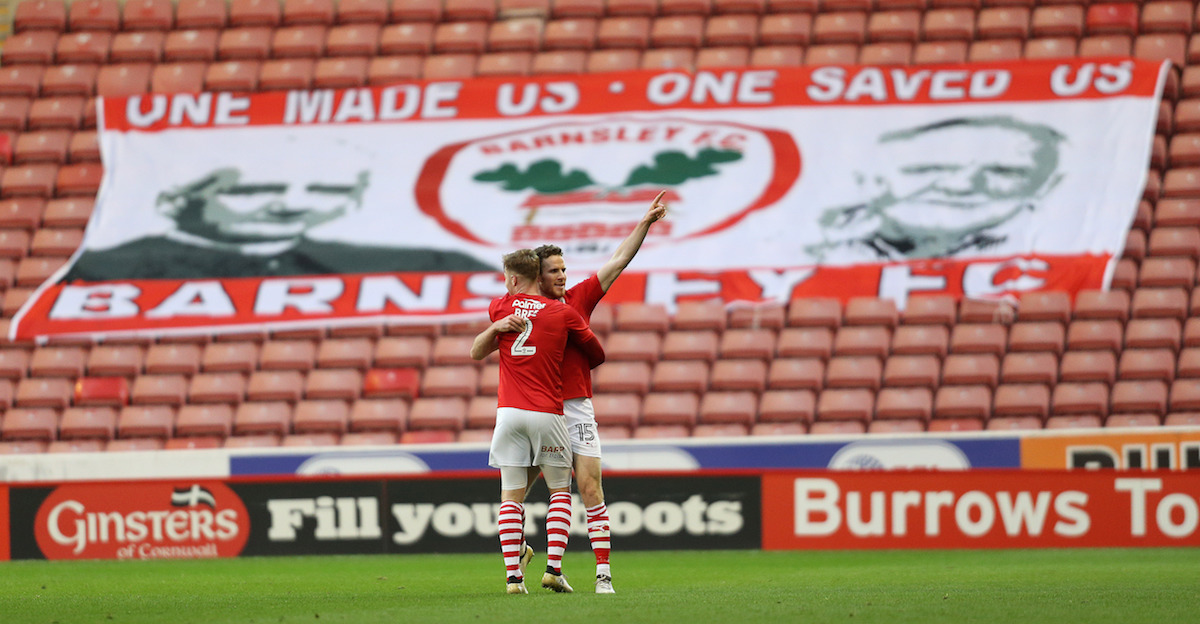 Choosing between Manchester City and Aston Villa may seem pretty straightforward but Bree is no stranger to turning heads with his decisions. At the age of 15, the defender opted to stay at Oakwell even though Manchester United had come calling. He knew he had more of a chance of playing regular first-team football with Barnsley and this will no doubt play a part in his thought process this time around.

It isn’t a guarantee that Guardiola’s men would come out on top in this war.

Wakefield-born Bree has seen his reputation flourish this season with some fine performances in a Barnsley side who currently sit in eighth position and just four points off of the play offs. The clamour for the full-back, who can also play in midfield, has really intensified as of late due to the fact he has just the six months remaining on his deal.

His development has been likened to that of John Stones’, there must be something in the water at the club, and stylistically he’s been compared to Eric Dier and it’s easy to see why. He can play a whole host of positions, he’s comfortable on the ball and composed under pressure. He uses his pace to get up and down the right flank throughout matches and it helps him recover when the ball is turned over during an attacking transition.

Bree has got impressive technique, he’s intelligent and he’s dominant in the air. He’s potentially, dare I say it, a perfect modern day defender.

The 19-year-old could do a job for many Premier League clubs and if he progresses as expected, he could well be playing at the top level for the next 15 years. It’s no surprise clubs are queuing up; he could turn out to be one of the greatest bargain buys ever.

Looking at him statistically there’s nothing that really stands out but that’s dependant on the system he’s being deployed in. The following stats are all per 90 minutes. He averages a combined 2.5 tackles and interceptions, wins 2.1 aerial duels, and completes 62.7% of the 33 passes he attempts. There’s definitely room for improvement but he’s adaptable and can be moulded into whatever sort of full-back is required for that particular system.

A Look at James Bree’s Strengths 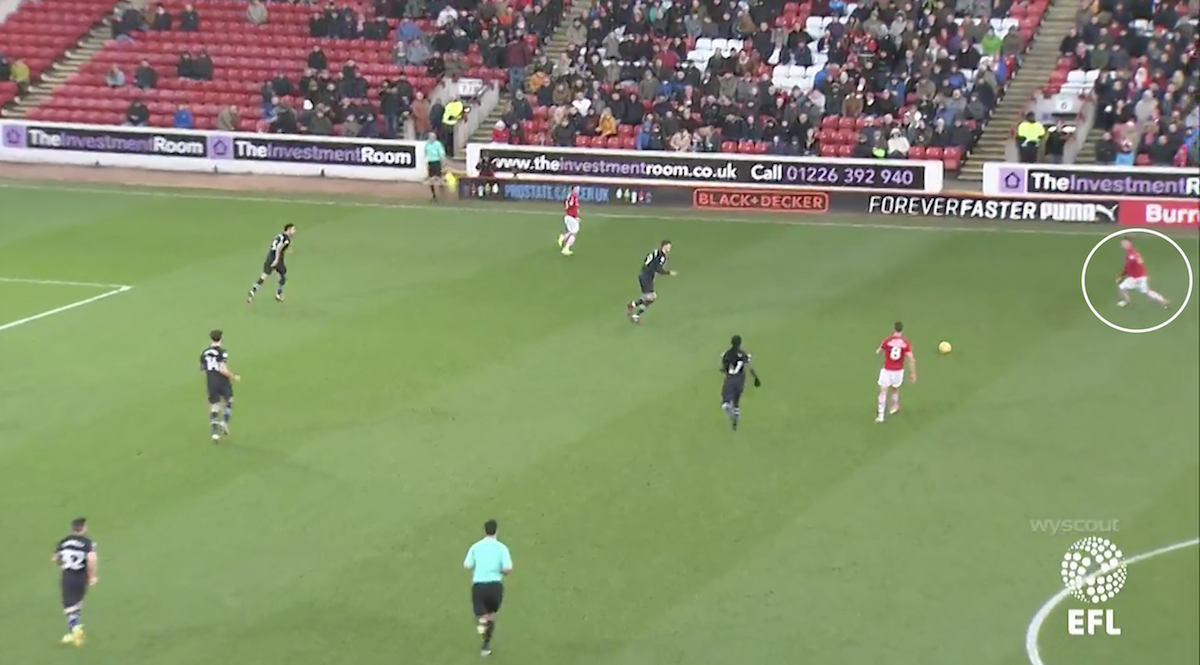 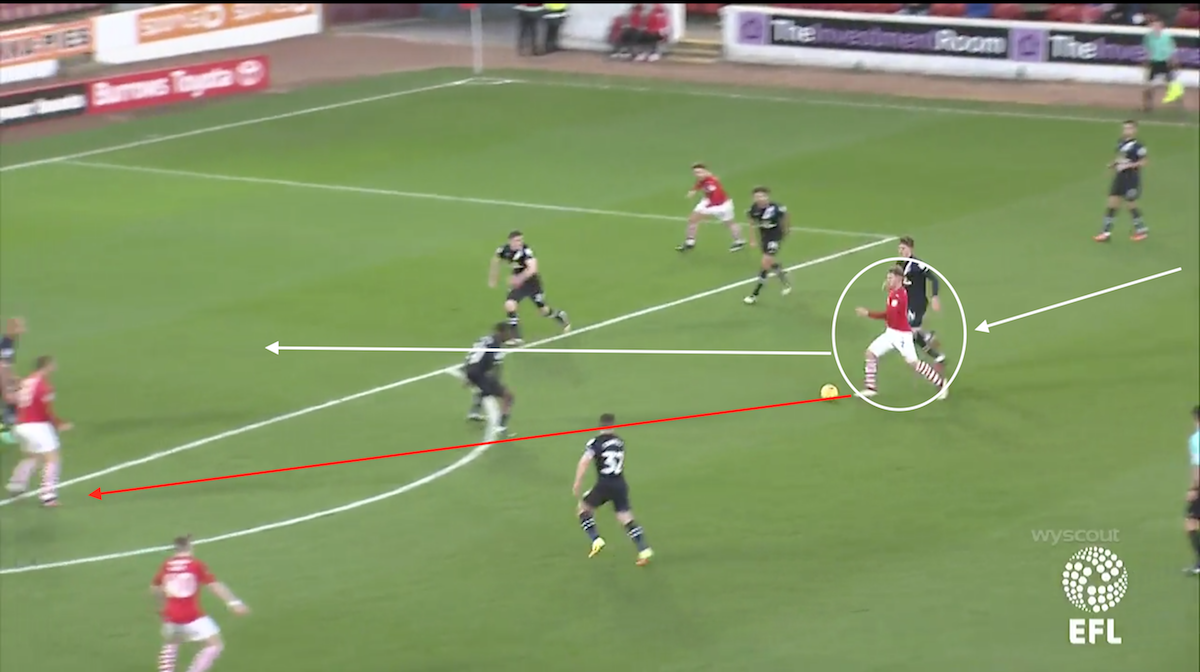 In the picture above you see Bree pick the ball up in a wide area. He could play a pass to the Barnsley right winger before overlapping but instead he shows not only his confidence but his ability on the ball too. He cuts inside which attracts opposing players to him and creates space which he’s looking to exploit. He plays a pass, highlighted by a red arrow, and continues his run into the box, the white arrow, but eventually he’s crowded out. It’s not often you see a full-back looking to get beyond the striker in a central area. 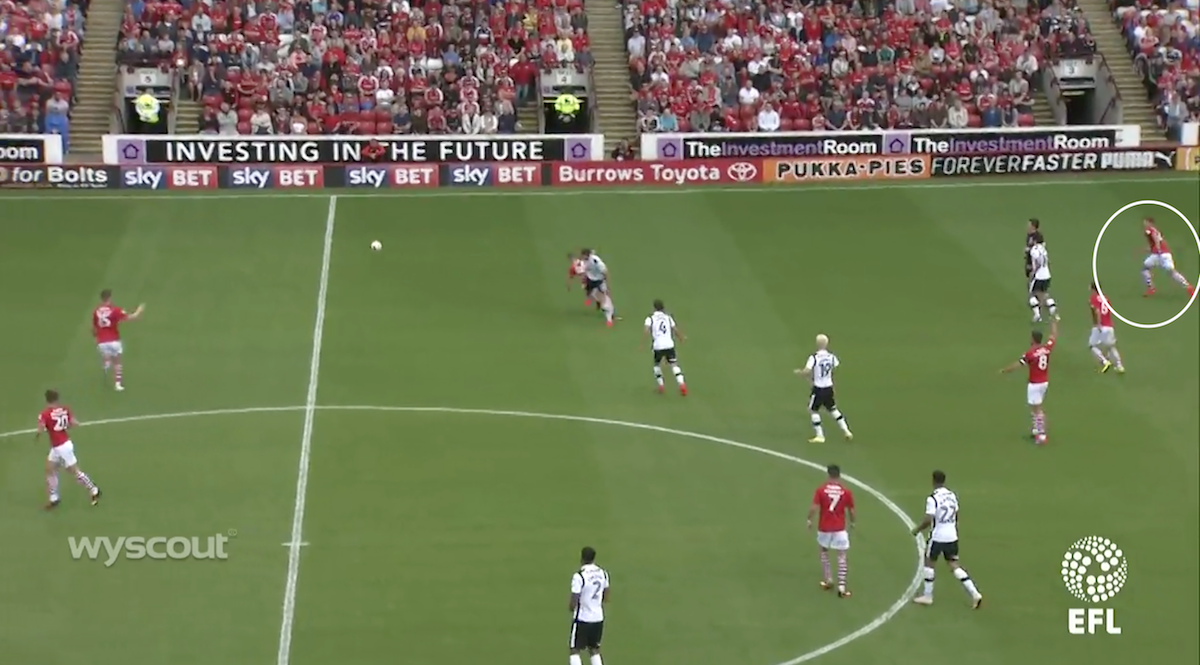 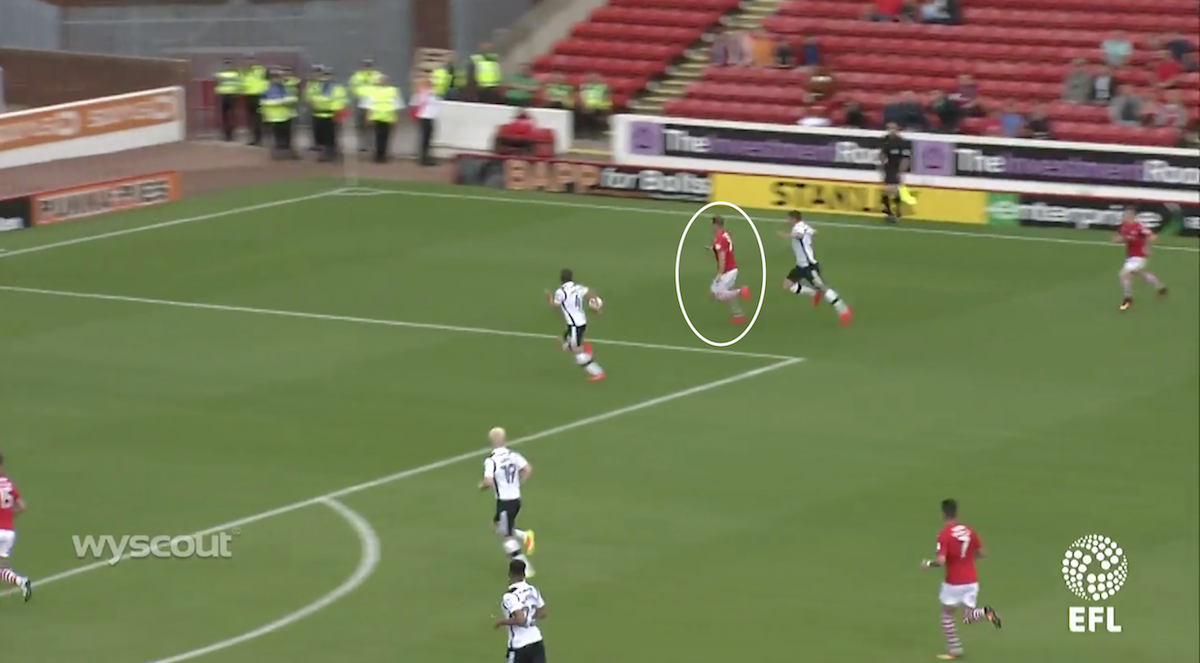 This time around you see Bree supporting the attack and just how quick he is. In the first picture he’s circled in his defensive third as Barnsley win the ball back off of Derby in a central area. Ryan Kent picks up the loose ball and there’s a chance for a counter attack as he drives into the space ahead of him. Bree bursts a gut to support the Barnsley winger and in the second picture you see him deep in the Derby half just as he attempts to put in a cross which is ultimately blocked. 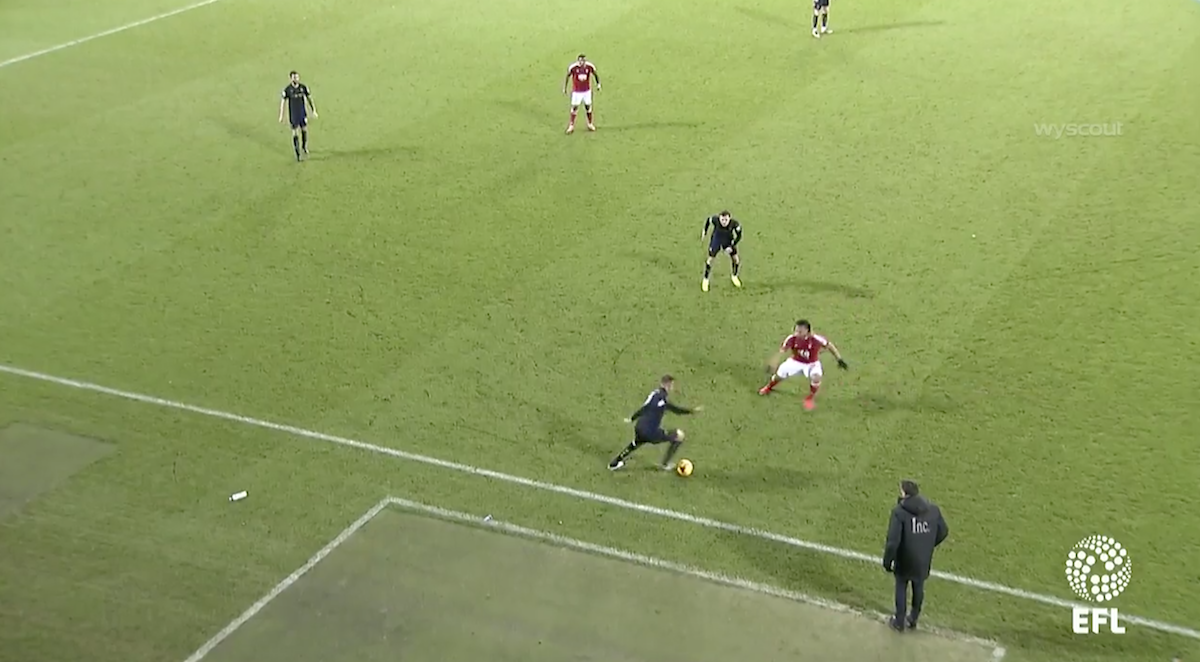 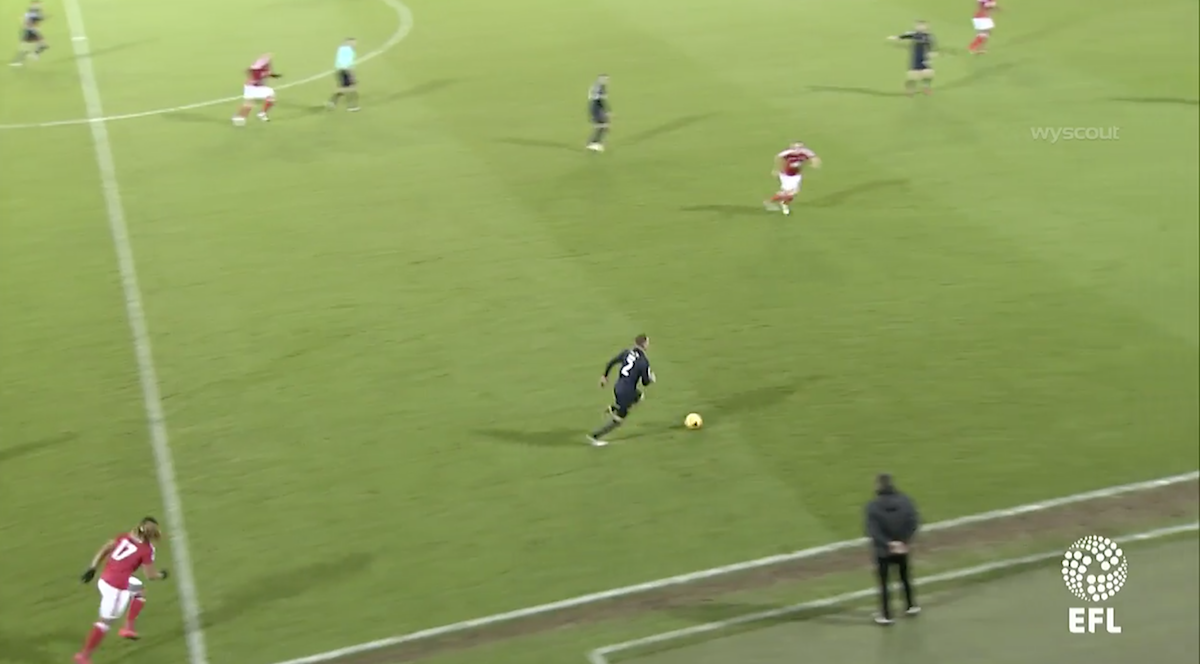 In the first picture above you see Bree pick up the ball close to the touchline with an opposition player closing in on him. It’s not a position most full-backs would be comfortable in and many in this situation would just look to play the ball long. After all, being composed isn’t part of the DNA or the norm when it comes to defenders in England. However, the Barnsley man shrugs off the player looking to dispossess and drives into the space ahead of him.

It’s this which further highlights the fact he’s composed on the ball. You won’t see him needlessly hoof the ball forward unless it’s necessary. The opposition may target him in possession and they may regain the ball but there’s every chance he will bypass the press and take them out of the game.

It’s also unnerving how accurate his crossing is. There are countless examples of this. Whether it’s an early ball in, one from a deep area or one after he’s beat a man on the outside, his crosses seem to cause chaos in the penalty area and whoever signs him is going to be able to add that weapon to their arsenal.

Teams only complete 0.5 dribbles per 90 minutes past Bree. Unfortunately though, because he’s still young, his positioning can be a little confused and it enables players to get a run on him as seen in the pictures below. 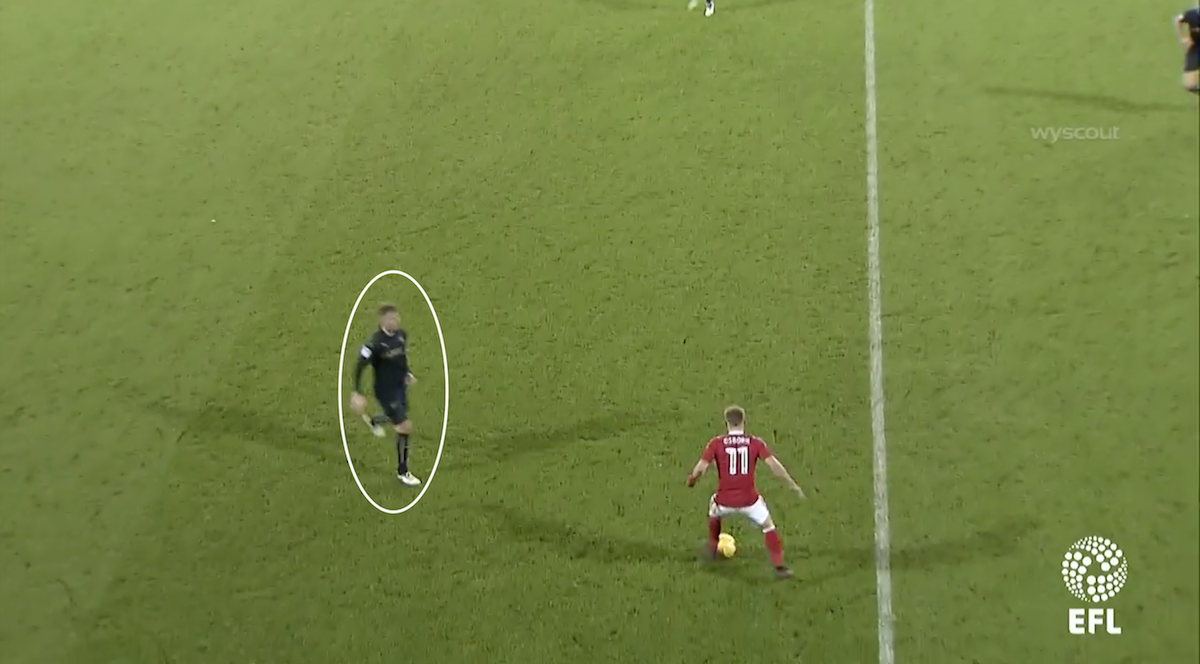 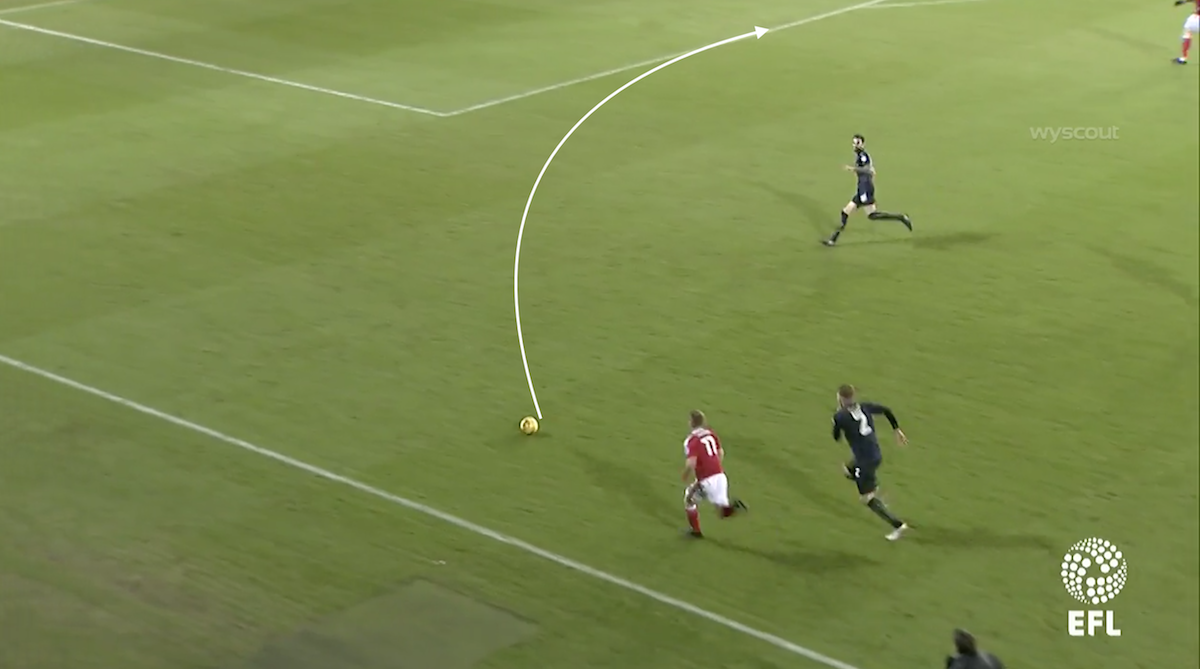 The opposition’s number 11 has dropped deep to receive a pass and Bree has tracked him. However, he’s not tight enough to stop the player from turning on the ball and squaring him up and he’s not withdrawn enough to have a head start if the ball is knocked past him. He’s in no man’s land in many ways.

The man on the ball turns, knocks the ball past him and into the space Bree has vacated. Before the right-back is able to use his blistering pace to recover, the ball is played to the striker who takes full advantage of the fact the right sided centre-back has had to push over to cover for the advanced full-back. The forward is able to turn on the ball in the area and pass it home.

Bree needs to learn when to engage and when to stand off because he’s going to get punished in the Premier League if he doesn't. 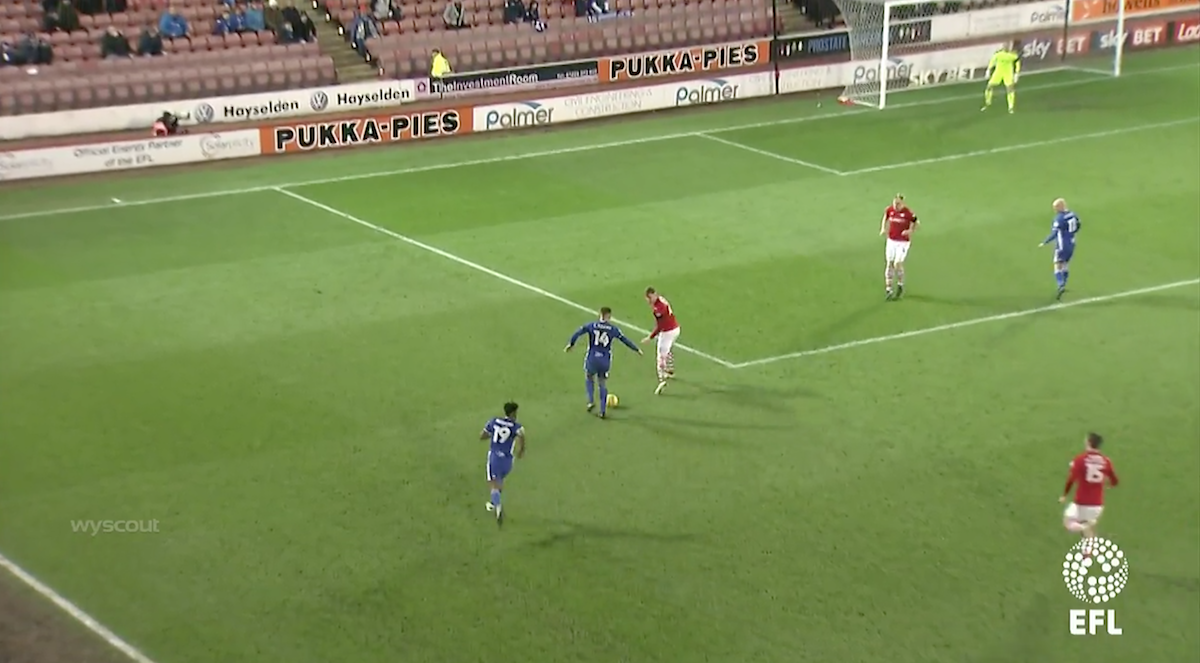 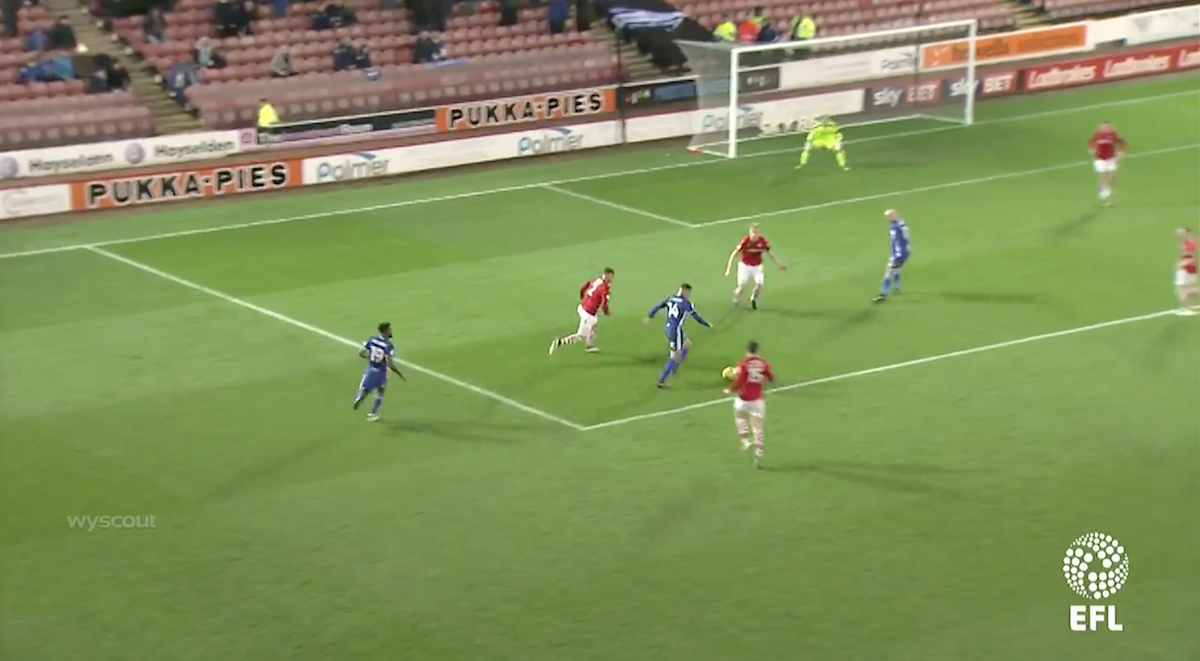 In the two pictures above it’s clear Bree should be getting support from teammates. But he lets the man on the ball cut inside onto his dominant foot far too easily and Barnsley are fortunate not to be punished. He needs to be showing him down the outside knowing full well the player has the ability to cut in and do damage. A lot of Premier League teams use inside forwards like that and he’s not going to be able to afford them those sort of chances.

He’s by no means the finished product but for a rumoured £4million you can’t go wrong with a player who has an abundance of potential like Bree has. Barnsley definitely won’t want to sell but his contract situation makes it difficult for them to turn down bids and the Tykes can’t match the wages that could be potentially on offer from all of those clubs.

If you analyse Manchester City transfer rumoured targets since Guardiola was appointed it’s clear that they need a right-back with both Bacary Sagna and Pablo Zabaleta nearing the end of their careers. Manchester United need a long-term plan for that position and Bree could finally end up at the club he rejected four years ago. Spurs need cover for Kyle Walker with Kieran Tripper reportedly keen on moving to find first-team football. Likewise with Arsenal, the Gunners need solid backup for Hector Bellerin. They’re all plausible destinations.