Football kits are extremely evocative, perhaps more so than any goal, flash of individual genius, collective artwork or rollicking game. They can remain in the memory in ways few other things can, in a purely materialistic sense, for colour or for design. Over the years, this aspect of football has become a vehicle for the rampant commercialism that now afflicts the game. Every season comes replete with gleaming brand new kits, each with a garish shirt sponsor and a hefty price tag. Kits, primarily because of their evocation, have become perfect tools for fan exploitation and financial gain.

It hasn’t always been this way, however. There were times when a kit was merely a method of distinguishing between teams. Gradually, they became symbolic, some even iconic. And then, inevitably, came the idea of the kit as pure product, a boost to the bottom line. Yet, while the intent behind football kits’ manufacture may have changed, the end result has essentially stayed the same; they still possess the ability to inspire or repulse.

The European Championships began in 1960. And, over the course of the tournament’s long history, there have been many changes to the continent’s football kits. A glance through those kits is not simply an opportunity to laugh at the past, to peruse strange patterns and awkward colour combinations; it is also a chance to relive the great teams and players, those whom the kits adorned. It also gives a subtle reminder of where football was before, and where it is today.

Just like the ongoing edition, the first ever European Championships were held in France. However, there were vast differences in the tournament’s layout. Back then, only four teams qualified for the finals, as opposed to the twenty-four taking part in 2016. There was also a noticeable lack of sponsorship on team kits.

There was a beautiful simplicity to the competition that was reflected in the sportswear. The Soviet Union, eventual winners of the inaugural finals, wore a red shirt with the letters CCCP, an abbreviation for what translated as ‘The Union of Soviet Socialist Republics’ emblazoned across it. Yugoslavia, who were defeated in the final, wore a plain blue shirt with the national emblem, six torches burning into one flame, symbolising the brotherhood and unity of the six federal republics – Bosnia and Herzegovina, Croatia, Macedonia, Montenegro, Serbia and Slovenia – that made up the country.

The theme of simplicity proceeded into the 1964, 1968 and 1972 tournaments, where all that was visible on each shirt was a national crest. They were nonetheless unmistakable; Italy won the ’68 finals in their classic Azzurri, and West Germany won in ’72 while sporting their pristine white with a black collar. Evidently, commercialism hadn’t quite weaved its way into football kit culture. 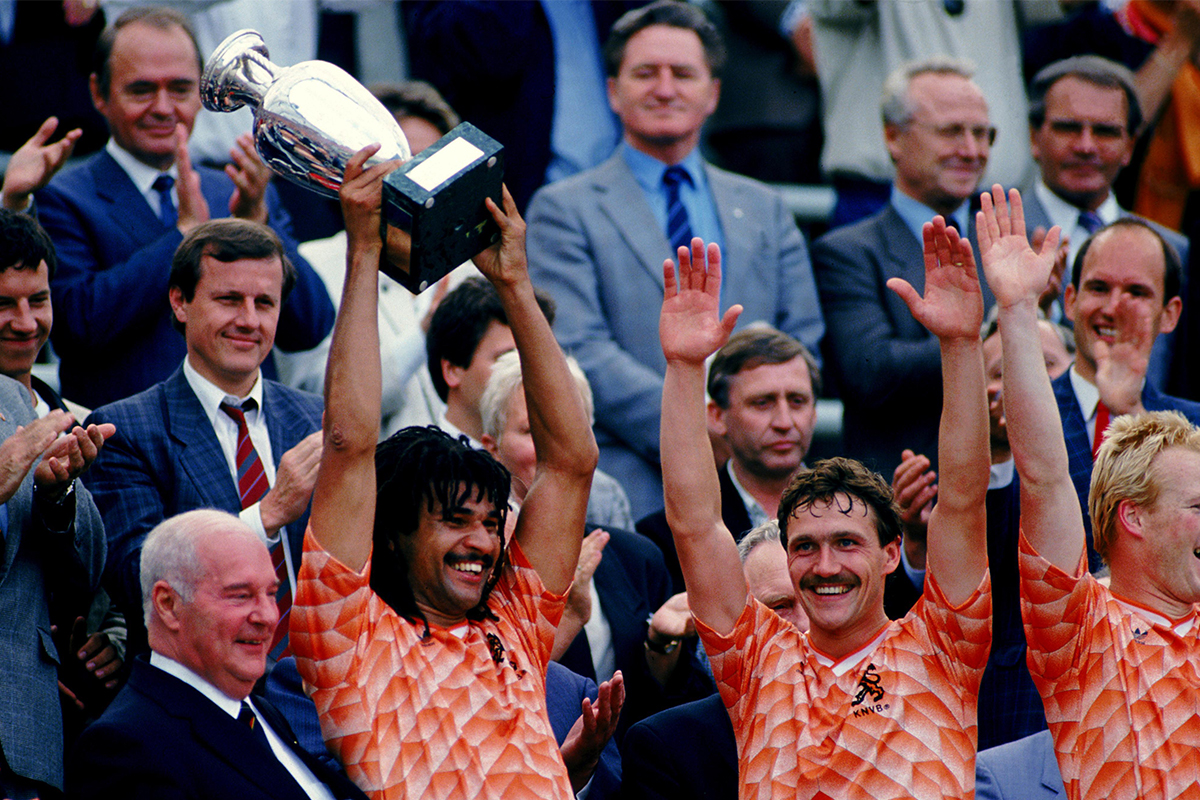 Rise of the logo

At the 1974 World Cup in West Germany, the Netherlands were one of the favourites. Total Football had captured the imagination and conquered European club football, and the Dutch had agreed a deal with Adidas to supply their kits for the biggest stage of them all. While most of their players weren’t fussed about the deal, Johan Cruyff, their star man, was less pleased. He had an exclusive personal deal with Puma, who supplied him with boots, and wasn’t too keen on showcasing another brand. Resultantly, his shirt had just two stripes, as opposed to Adidas’ traditional three.

Euro 1980 saw an expansion to the format, with eight teams qualifying for the finals in Italy. But, while UEFA allowed more and more nations to gain entry to the tournament, they fought back against the rise of the logo. They banned the appearance of manufacturer branding, meaning those teams whose kits were supplied by Adidas had to cover the logo with masking tape. Greece ignored the ruling and subsequently had to pay a fine at the competition’s conclusion.

UEFA’s ruling worked, sort of, but only temporarily, and by 1984 the logo was back on shirts with a vengeance. On top of that, some of the most dazzling teams in international football history graced two iconic kits. France, eventual winners that year, sported a classic design with horizontal red and white stripes, as well as their Peacock national association crest, while Denmark, a team capable of stunning football, shimmered in their red and white colours.

1988’s European Championships saw some of the more memorable kits in the tournament’s history, such as the Dutch with their hypnotic faded pattern and the West Germans with the colours of their tricolour in horizontal stripes across the shirt. There was also a notable increase in the quantity of differing brands on show; Le Coq Sportif sponsored Spain, Hummel sponsored Denmark, and Umbro sponsored England.

By 1996 UEFA had expanded the format to include sixteen teams, which meant more funky kits, including Romania’s flashy yellow number, Scotland’s all-tartan offering and Croatia’s beautiful red and white chequered design, as well as more brands. And, in Euro 2000, Italy wore the first figure-hugging kit, as designed by Kappa, both to flatter their players’ physiques and to discourage shirt-pulling. 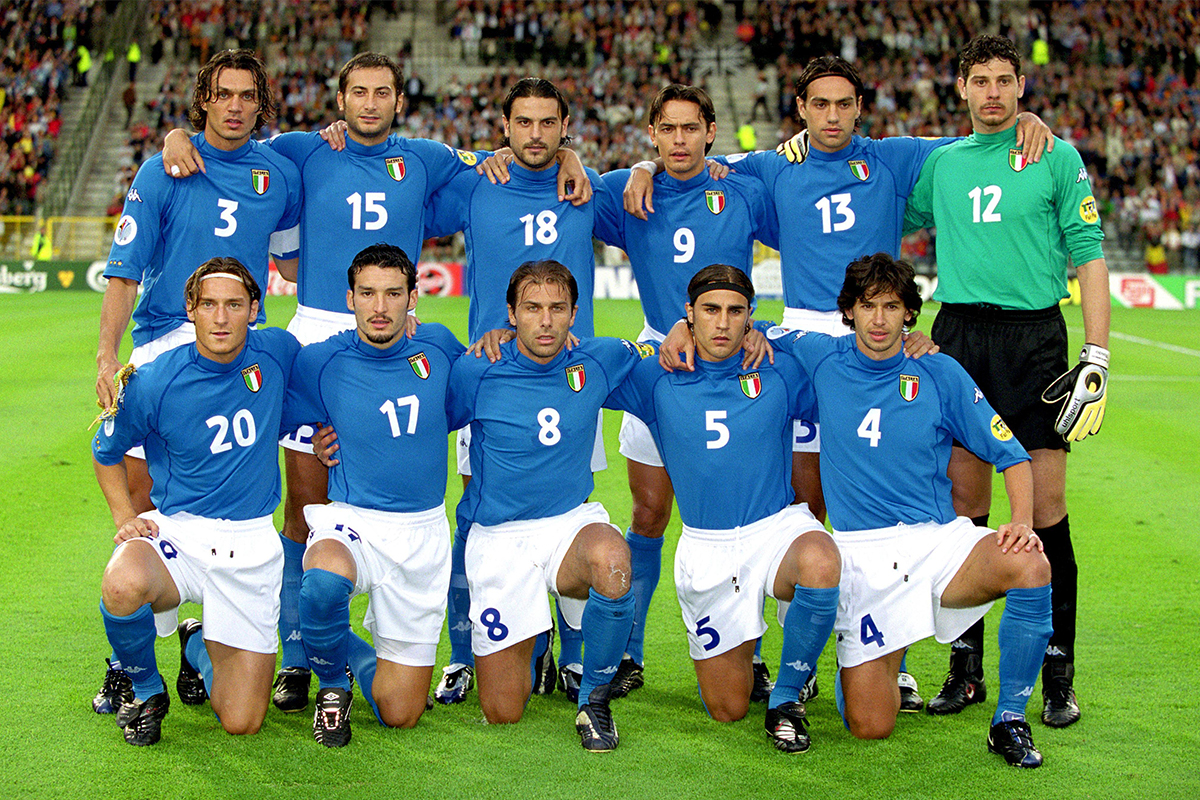 National symbols became more prevalent through 2004, 2008 and 2012’s tournaments. In 2008, Russia weaved the colours of their flag into their shirt, while four years later there was an outcry in Poland prior to the tournament because Nike, their kit manufacturers, had omitted the traditional crowned eagle. This was rectified within one month of the kits being released however, as the brand bowed to public demand. Then, in 2012, England’s kit, for the first time, had no trace of blue; the purely red and white colours were inspired by Saint George’s cross.

Euro 2016 is the largest ever in the tournament’s history, with twenty-four nations competing. As well as being eight times the size of the original edition in 1960, the kits on show are more complex in design than ever before, something Spain’s abstract away shirt and England’s abominable colour-mashup aptly demonstrate. And, predictably, there is a greater range of sponsors than ever before.