The new season is underway and there’s a sense of optimism around West Ham United’s London Stadium after what appears to have been a successful summer in the transfer market.

After years of struggling to secure a top-class striker, Hammers’ fans were relieved to see the club bring in 25-year-old French hitman Sébastien Haller in a deal worth up to £45million. The 6ft 3in colossus arrives off the back of a 20-goal season at Europa League semi-finalists Eintracht Frankfurt, suggesting that he should find the net more times than the likes of Jordan Hugill and Lucas Pérez – two budget acquisitions who failed to make the grade in recent years.

But if West Ham could be accused of doing things ‘on the cheap’ in the past, there appears to have been a shift in transfer policy at the London Stadium, with a £70million outlay this summer following a total spend of over £90million the previous year.

Striking depth has been added in the form of 22-year-old Swiss international Albian Ajeti, and playmaker Pablo Fornals has arrived from Villarreal for a reported fee of £24million to add creativity in midfield.

West Ham look to have strengthened in all the right places (despite being a little short of quality defensive midfielders), but ironically it could be a player already at the club who is the key to their chances of success this season.

After missing the vast majority of the 2018/19 campaign with a cruciate ligament injury, Argentinian midfielder Manuel Lanzini was never likely to be at the top of his game when he finally returned to fitness in late February. But with a full pre-season under his belt, the 26-year-old creator will be like a new addition for manager Manuel Pellegrini. 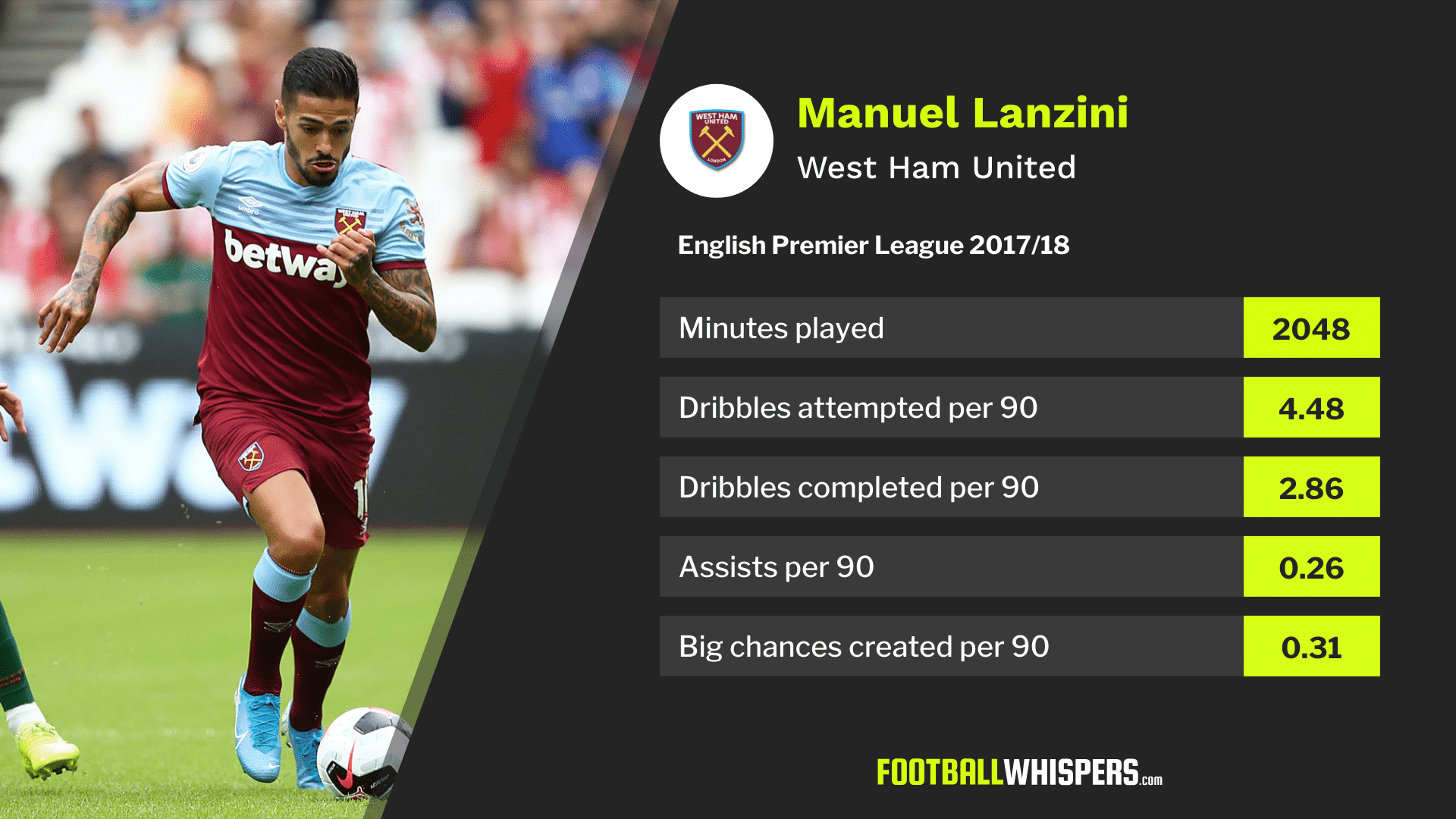 It’s easy to forget just how good Lanzini was during his last full season for the Hammers. If we take a look at his performances from 2017/18, when he made 27 Premier League appearances, it's clear the man from Buenos Aires is a top-class midfielder and a key component in the centre of the park for West Ham.

Lanzini’s passing accuracy of 87.6 per cent reflects a player who is comfortable with the ball at his feet and careful with his distribution, but this is a man who is as committed to taking players on as he is to retaining possession. He attempted the eighth most dribbles of any Premier League midfielder that season per 90 minutes played (4.48), and came inside the top ten for dribbles completed (2.85 per 90).

The metronomic playmaker isn’t afraid to shoot either, and his 0.79 shots on target per 90 was only bettered by ten midfielders in England’s top flight during that campaign. With his assists (0.26 per 90) and Big Chances created (0.36 per 90) both also falling inside the top 20, there is little doubt Lanzini’s silky play results in more chances and more goals for West Ham when he’s on the field.

A surprising ability to win the ball high up the pitch is another string to the four-cap international’s bow, and he was the 14th most successful midfield player when it came to winning the ball in the final third during 2017/18 (0.86 times per 90). 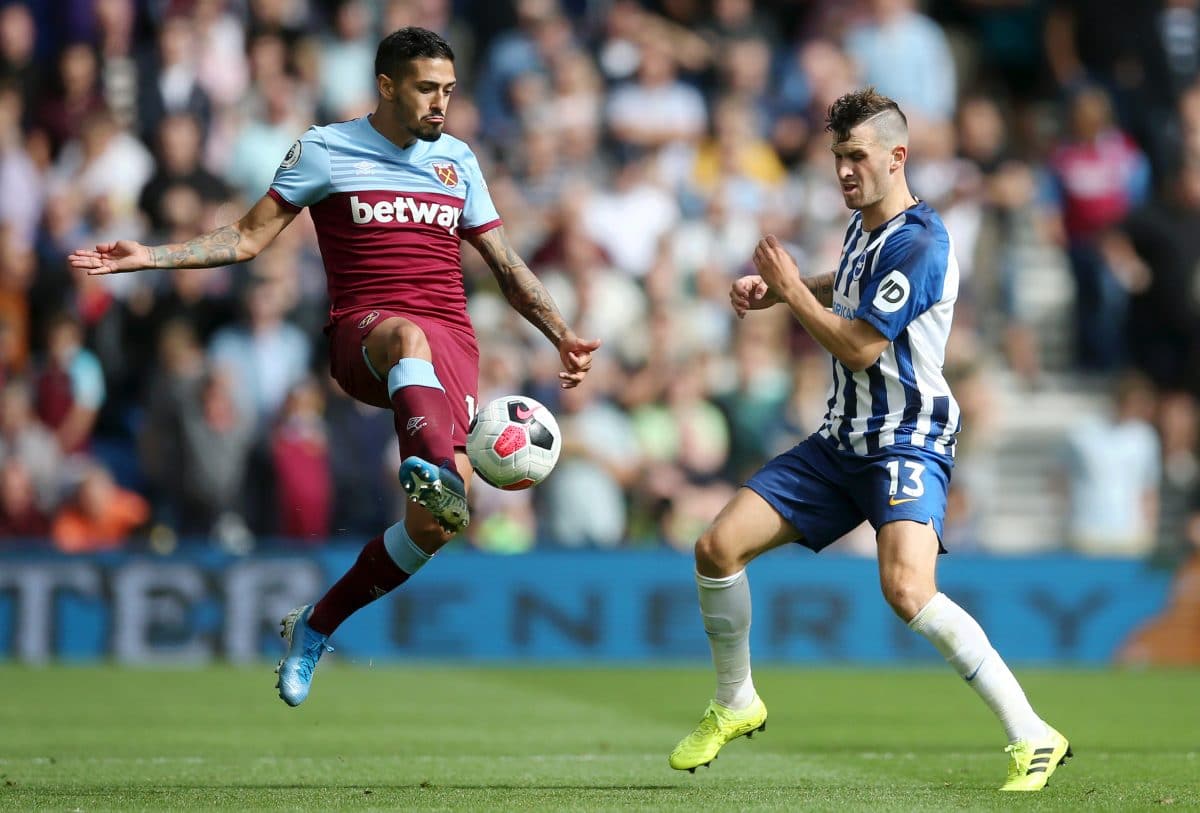 The Hammers may have signed a similar player to Lanzini in Fornals, but the Spaniard can compliment the West Ham star, rather than taking his place as the primary playmaker in the side. Having both options gives Pellegrini multiple ways to break down opposition defences, and he could well choose to rotate their positions on the pitch as he did against Brighton and Hove Albion.

West Ham began that match with Fornals out on the left and Lanzini in the middle, in a 4-1-4-1 formation. But in the second half Lanzini moved out to the left wing, with Fornals switching to the right flank. That change allowed the visitors to make a breakthrough just after the hour mark, despite ultimately being pegged back by Brighton a few minutes later.

Lanzini might find himself having to get used to playing in a greater range of positions this season if last Saturday is anything to go by, but that doesn’t detract from the fact that he should still be considered West Ham’s main man in 2019/20.

It’s easy to forget a player’s quality when they miss much of a season through injury, but a fully fit Lanzini could be more important than any of the Hammers’ new signings over the coming months.