Twenty years ago Brighton and Hove Albion stood on the brink of oblivion. Struggling at the bottom of England’s fourth tier and about to lose their home of almost 100 years things looked pretty bleak; and when they faced Hereford United in the final game of the season, fans of both clubs knew it might well be their last.

Such was the enormity of the final game of the 1996/97 that fans of Brighton and Hereford knew that by the end of the day, one of their sides would no longer be in the Football League, as the two teams faced-off in what was effectively a relegation decider, with the winner taking all and the loser standing small.

As recently as the early 1980s, Brighton were a First Division side who had faced Manchester United at Wembley in the FA Cup final, but just 14 years later and the Seagulls had tumbled down the table and looked to be destined for another relegation, this time out of the league entirely.

And this rapid demise wasn’t just brought about poor on-field results, it was also due to a lack of funding and poor leadership by a couple of investors who had little, if no, regard for the club, let alone their long-suffering fans.

Bill Archer and Greg Stanley were a pair of DIY tycoons who owned the chain of Focus stores who had bought the club back in 1993. They paid just £56.25 for the club and then said they would provide the £800,000 needed to fight off a winding up order, but not all was as it seemed.

Put simply, Archer and Stanley, along with their right-hand man David Bellotti, saw Brighton as nothing more than a cash cow and had used the club’s Goldstone Ground as a collateral asset; meaning the £800,000 ‘donation’ was nothing more than a glorified bank loan that had to be paid back – at a cost.

If things looked like they couldn’t get any worse it emerged that the trio planned to sell the Goldstone Ground, Albion’s home since 1902, with no plan for where the club would play the next season, whatever league that might be in.

Albion’s failure to win matches meant that for much of the campaign it appeared that, wherever they would be playing their home games in future, it would be hosting non-league football as the side, despite winning their opening game, slumped alarmingly in the months that followed.

Brighton won only four games before Christmas but more worryingly were losing games at an incredible rate, going down in five straight matches in October as a gulf began to open up between them and the teams above them. 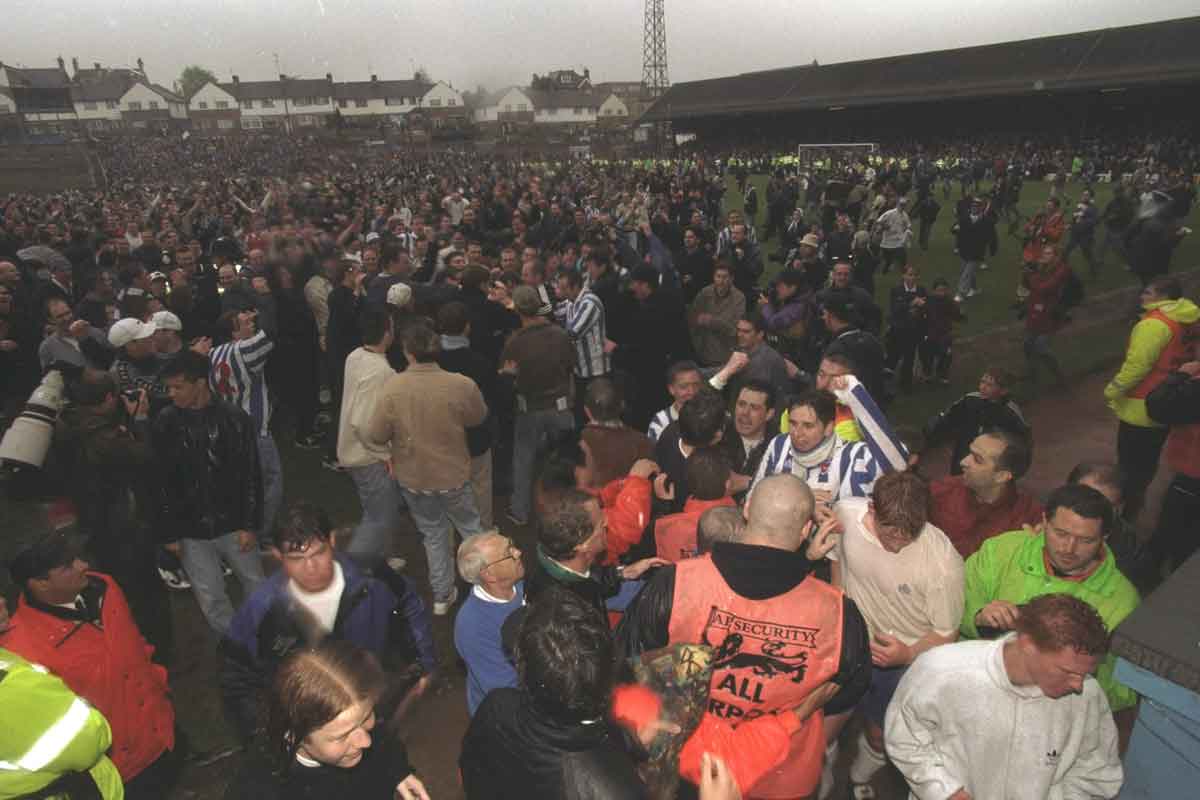 To make things worse, the club was hit with a two point penalty from the Football League, imposed as punishment for a pitch invasion by fans who were protesting against the sale of the Goldstone Ground, in a league game against Lincoln City on October 1, 1996.

The club later appealed against the penalty but their case was rejected and their plight was only alleviated by Hereford going from the October 26, 1996 to January 25, 1997 without a single league win, meaning they were far from the worst side in the division.

The turn of the year saw something of an upturn in fortunes for Brighton with three wins from four in January and February, but the off-field insecurity meant that whatever the team achieved on the pitch was eclipsed by news, rumour and gossip about what the future might hold for the club.

But if the unpopular owners thought they could destroy Brighton, they had severely underestimated the club's loyal and passionate support. Pitch invasions, protests outside Focus stores, marches through London and even visits to Archer’s house in Lancashire were all ways in which Albion fans showed their disgust at how their club was being ruined.

But if Brighton fans were going to achieve the impossible and save their club from imminent extinction they couldn’t do it alone and would need the help of the greater football community – they weren’t disappointed.

When a young Plymouth Argyle fan called Richard Vaughan used a relatively new invention called the internet to post on an early Albion online forum to say how he thought it would be a great idea for fans from across the country to come together and show their support for Brighton’s plight, he can’t have imagined the impact his message would have had.

The date chosen was Brighton’s home game against Hartlepool United on February 8, which was also an international break and a perfect chance to gain added exposure while at the bottom of the Football League. The idea snowballed, and with the cooperation of supporters-groups, “Fans United” was born.

After much planning, Brighton fans had high hopes for the day but surely can’t have foreseen just what would happen next. Temporary signs were posted on roads into the city directing fans towards the condemned Goldstone Ground, more in hope than expectation, for what, by now, had become something of a relegation battle.

What crowd this game would have attracted anyway is anybody’s guess, but an average gate of around 3,000 was boosted three-fold to over 9,000 on the day thanks to the coming together of football fans everywhere in an attempt to highlight to the nation the club’s perilous position.

Supporters from Germany and Poland were in attendance, as were those from as far and wide as Sheffield, Newcastle and Torquay – there were even representatives from bitter rivals Crystal Palace and Portsmouth. The bumper crowd roared Brighton on to a stunning 5-0 victory; not only a huge three points, but a massive win in a season when goal difference would be prove to be so important.

The “Fans United” event had shown the true value of fan power but on the pitch Brighton still had a mountain to climb. The shot in the arm provided by the event had spurred Albion on to a couple of crucial wins, only to be tempered with a number of disappointing defeats – one two steps forward, two steps back.

If it seemed the win over Hartlepool, backed by fans from across the country couldn’t be topped, what turned out to be the club’s last ever game at the Goldstone Ground would run it close. 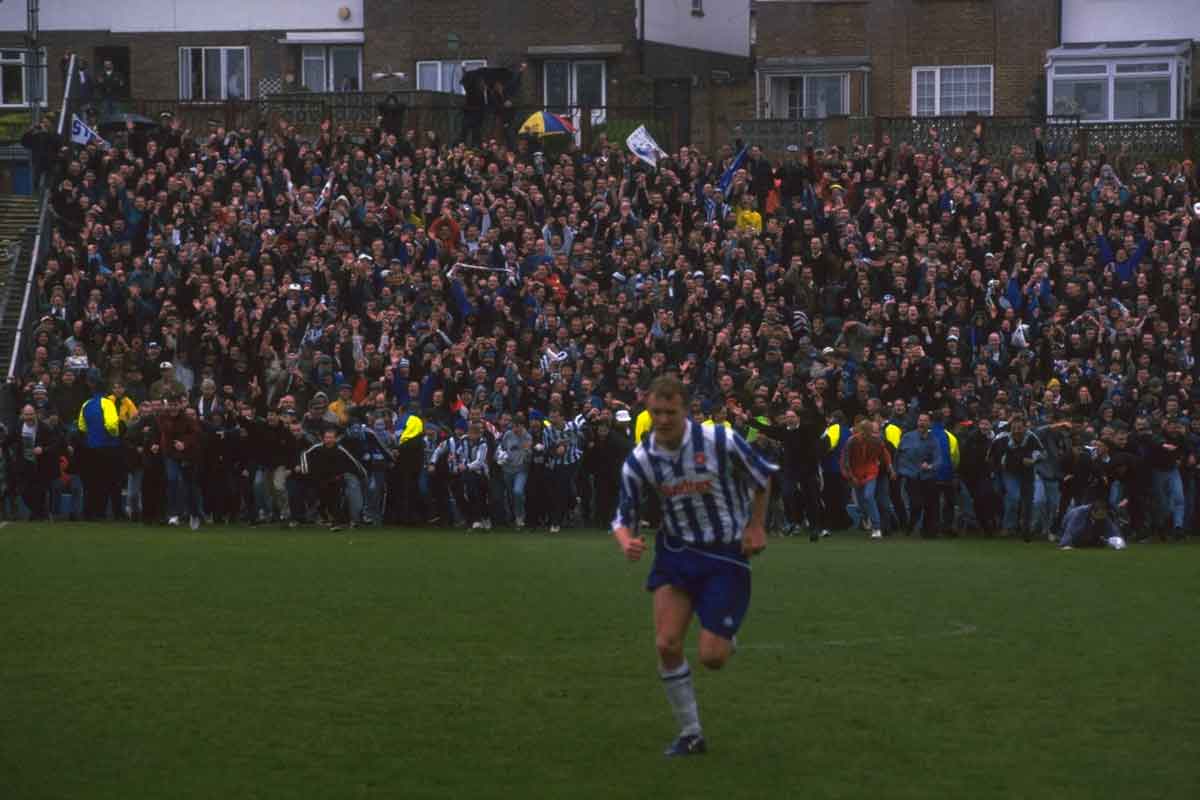 READ MORE: The Sorry Story Of Wolves In The 1980s

Brighton beat Doncaster Rovers 1–0 on April 26 in front of a crowd in excess of 11,000 as supporters took the chance to say a last goodbye to their long standing home, spilling onto the pitch at the end and taking whatever mementos they could find in a highly emotional occasion for all involved.

And despite being something of a sentimental send-off the result also lifted Brighton off the bottom of Division Three and meant that it would all come down to the final game the following weekend at Hereford as the club’s future lay in the balance.

Brighton’s relegation rivals were also showing similar inconsistencies and Hereford had drawn two and lost one of their last three, while Brighton had won twice and drawn once. The two both had 46 points but Brighton were ahead on goal difference meaning they only needed a draw to stay up while United had to win.

“I've never experienced anything like this,” said Hereford's manager, Graham Turner before the game, while Brighton manager Steve Gritt was a little more understated in his pre-game analysis. “There's an awful lot at stake,” he would say.

But despite the momentum generated by the likes of “Fans United” and that huge victory over Doncaster, Hereford came out of the blocks quicker than their opponents and looked the hungrier in a game that they knew they had to win to stay up.

So when Tony Agana's persistence led to Brighton’s Kerry Mayo turning the ball into his own net after 21 minutes the majority of the 8,532 crowd, 3,300 were Brighton supporters, harboured apprehensive hopes that Hereford could win the day.

The Bulls went desperately close to snatching a second goal but, as in so many occasions, they could not put away their scoring chances as the home side took control of the game. Soon after, Agana once again hit a fierce drive into the side netting and a little later came off second best after a brave challenge by Brighton keeper Mark Ormerod – there looked to be only one winner.

At the other end Hereford's captain David Norton, the outstanding Trevor Matthewson and John Brough snuffed out almost anything the Seagulls had thrown at them, but after the interval Brighton came back stronger.

On the 62nd minute Craig Maskell fired in a shot which Hereford ‘keeper Debont pushed on to a post. Reinelt was quickest to the rebound and the Brighton contingent erupted as the substitute fired, what will probably be his most memorable goal, into the net.

In the remaining frantic minutes Tony Agana's header drifted agonisingly wide of the woodwork and Ormerod made a fine save to turn away a smart shot from Bradley Sandeson, while at the other end Maskell and Ian Baird each wasted good chances to give Brighton victory.

On the final whistle fans from both ends poured on to the pitch, though with no malicious intent; Brighton fans wanted to celebrate with their victorious heroes while the home supporters wished to consoled the United players who lay devastated on the ground. Albion had survived, Hereford had not.

In subsequent seasons Albion would finally eject the trio of Archer, Stanley and Bellotti and would be offered a stay of execution thanks to the intervention of local business man Dick Knight. After several seasons in exile and forced to play their games in Gillingham and at a local athletics stadium they would eventually move to a new home; a 25,000 all seater stadium on the outskirts of the city, which will, as of next season, host Premier League matches.

Hereford, on the other hand, never really recovered from the crushing blow of relegation and languished in non-league football for a number of seasons before a resurgence under their manager that day in 1997, Graham Turner; but as with Brighton all those years before the club found itself at the mercy of those in charge of the club’s finances.

After dropping out of the league again in 2011 Hereford United then found themselves expelled for financial irregularities, only for the club to be wound up in the High Court in December 2014.

Of course nobody knows how different things could have been had it been Hereford, and not Brighton, who stayed up on that fateful Saturday afternoon in 1997; but for every football fan, regardless of what team they support, what has happened to both clubs since goes to show just how fickle the footballing finger of fate can be.