The Christmas fixture list remains relentless and while players and fans alike barely have chance to draw breath, the opening of the January transfer window is only four days away.

Here we profile eight potential transfers that could happen before January 31, bringing new faces to the Premier League.

Let’s be clear, with a few exceptions, deals of this magnitude rarely happen in the winter transfer window and, in all honesty, City probably don’t need Isco given their depth of attacking midfield options.

However, while the best-run clubs like to carefully plan transfer strategy several months, if not years, ahead, focusing on weaknesses – in City’s case support for Fernandinho – and likely remedies, if an opportunity like Isco presents itself, any club would take it. 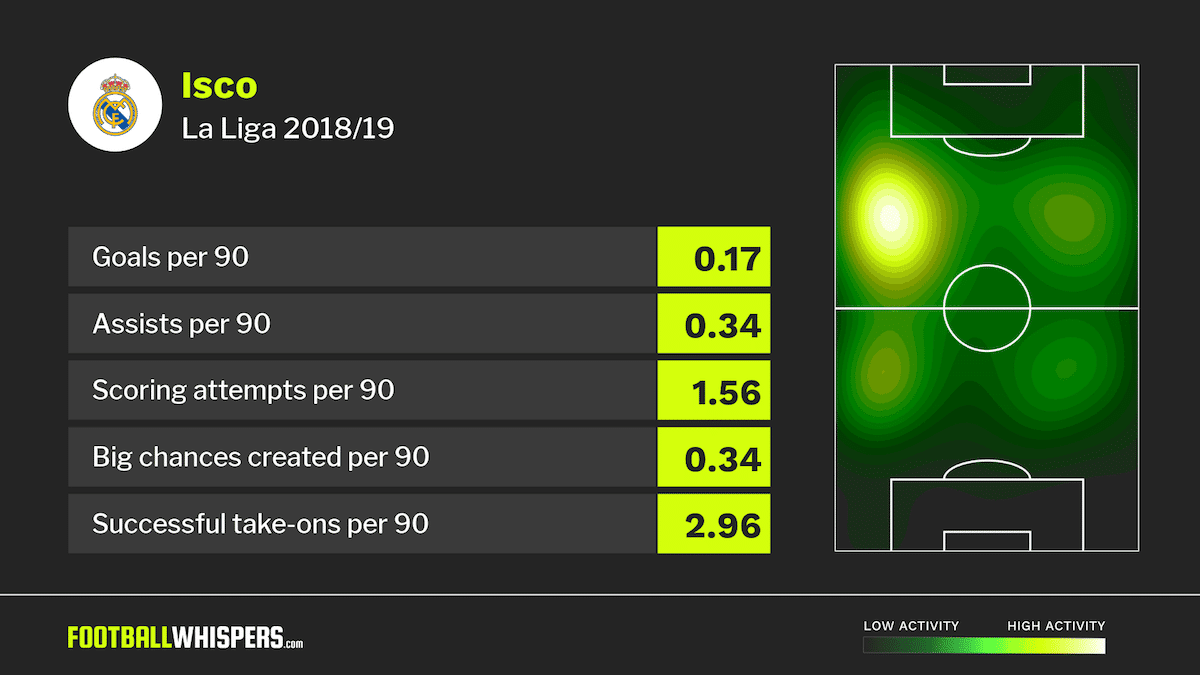 Players of his quality rarely appear on the open market but something is clearly not quite right at Madrid and while Florentino Perez may have previously considered Gareth Bale, Luka Modrić or Toni Kroos as his likely cash cows to help fund a summer move for Neymar, maybe Isco is the surer bet.

At 26, he’s in his prime and with room still to improve, is under contract until 2022 and should fetch a huge fee.

His relationship with Santiago Solari doesn’t appear particularly harmonious and Pep Guardiola is precisely the sort of coach who can draw the very best out of him and who would simply love working with the Spaniard.

A staple of Maurizio Sarri’s defence at Napoli, the Albanian full-back remains a key part of Carlo Ancelotti’s squad but has lost an element of his importance to the team; emphasised by the fact he started just one Champions League game.

It’s common knowledge Chelsea tried to sign him in the summer and a recent quote from his agent Mario Giuffredi spells out the situation: “I can’t rule out resuming negotiations with Chelsea in January.”

This could be an element of brinksmanship as Hysaj has been in contract talks with Napoli but, at the same time, Sarri clearly wants to make further changes to his squad and knows Hysaj’s capabilities. The 24-year-old can play right or left back, is the sort of all-action, energetic footballer the Italian likes, and who has previously bought into his ideology.

Chelsea’s options beyond Cesar Azpilicueta and Marcos Alonso are thin and one of the those, Davide Zappacosta, could also be used to help ease negotiations.

Another defender familiar to Sarri, having worked with him at Empoli 2013-2015, and who could become available, given his lack of game time for Juventus. With Gary Cahill’s departure inevitable and Andreas Christensen’s future uncertain, Rugani could provide a third option alongside Antonio Rudiger and David Luiz, and long-term replacement for the Brazilian.

Barcelona’s sudden interest in the Italian slightly muddies the waters but the Catalans are more likely to pursue a loan deal whereas the Premier League club would prefer to buy the 24-year-old outright, which would surely be the more appealing option for Juventus.

That said, the Bianconeri are not overly keen on losing the defensive prospect considering Leonardo Bonucci and Giorgio Chiellini’s advancing years and have been in contract talks. It would therefore take a significant fee to convince them to part with the centre-back.

Outside of Paris Saint-Germain and Lyon, Lille have probably been the best side to watch in Ligue 1 this season, essentially because of their revitalised attack with Pépé at the forefront.

The fact the Ivorian has achieved that while playing as a right winger is immensely impressive.

As a result, the secret is out and, like so many in the French top-flight, is exit appears only a matter of time.

Barcelona have already held talks with Lille and further interest has come from Bayern Munich and Juventus.

Wingers who can be a creator, defensive line breaker and goalscorer are in demand and with Pepe likely to cost below £50m, he represents considerable value for money.

Unai Emery already has the Gunners playing with a quickness lost in the latter days of Arsène Wenger but his best offensive players – Pierre-Emerick Aubameyang, Alexandre Lacazette, Mesut Özil, Aaron Ramsey – are all mainly central players.

Theoretically, Pepe provides an additional threat out wide with guaranteed goals. And an Aubameyang-Lacazette-Pépé front three would, at least on paper, be quite a prospect. Arsenal will have to act quickly, though.

It’s become crystal clear not only what Marco Silva has changed at Everton but where he wants his team to go. The Toffees have been transformed from a stale, one-dimensional attacking side into a vibrant, fast, counter-punching offensive unit.

Having brought Richarlison and Bernard to the club and with that style also suiting Theo Walcott,  Dominic Calvert-Lewin and Ademola Lookman, the gaping hole in the final third is through the middle where Cenk Tosun’s more traditional frontline striker attributes aren’t really applicable to ‘Silvaball’.

Augustin is a forward who undoubtedly appeals to Everton boss given his athleticism, speed and improving finishing skills, as he’s become a key individual for Leipzig over the last 18 months. With the German side out of the Europa League, their stance on selling the 21-year-old may have slightly softened.

Lookman could also prove important in the deal with Leipzig keen on signing the 21-year-old permanently following his impressive loan spell last season. On the face of it, Everton would be loathed to lose the winger but, then again, Silva has barely used him this term.

It’s also worth considering Southampton’s position. New coach Ralph Hasenhüttl worked with Augustin at Leipzig and Saints are in urgent need of extra firepower and pace in the final third.

Their precarious status towards the bottom of the Premier League could also mean they’re more willing to gamble financially than Everton.

Having reinforced and reorganised his defence, turning the Reds backline into arguably one of the best in Europe, Jürgen Klopp’s next mission is undoubtedly securing a greater balance in midfield.

His tried-and-tested trio of Jordan Henderson, Georginio Wijnaldum and James Milner has an alarming lack of creativity, while we’re still waiting for the expected impact of Naby Keïta.

Fabinho has shown his excellence in recent weeks and should be a real force in the second half of the season but there is still a disconnect between the middle of the park and attack.

Step forward Germany international Demirbay who’s capable of playing either as a deep-lying playmaker or as a more offensive attacker and is among the top five players in Europe for key passes per 90.

Demirbay has admitted he’s aware of Liverpool’s interest and with Hoffenheim out of European competition altogether, January could be the best time to try and prise the 25-year-old away.

By next summer his stock could have risen further, bringing further interest and greater complication to any transfer.

The Mexican international is out of contract next summer and has shown no inclination of extending his five-year stay at Porto. The smart money says he won’t be moving on until July, but then the breadth of interest in the 28-year-old could cause a transfer to happen sooner rather than later.

For starters, Porto would be open to a sale now and recoup some semblance of a transfer fee for a player they have helped turn into a Champions League-level midfielder and could lose for nothing.

From Tottenham’s point of view, with Real Madrid and Inter lurking, making a financial commitment now could secure Herrera, rather than witness the inevitability of him moving to the Bernabéu in six months.

The 28-year-old may not be the all-encompassing wrecking ball mixed with a metronomic presence at the base of the midfield, Mauricio Pochettino needs, but he adds a real wealth of passing, experience and creativity in an area Spurs look light.

Largely unknown outside of France, even in his native Argentina, before this season, Sala is among the leading goalscorers in Europe and his departure from Nantes appears inevitable.

The only question being, whether it happens next month or next summer.

Sala scored 12 goals in 35 games under Ranieri last season and the Italian seems to be concentrating his efforts more on making struggling Fulham a more efficient attacking side than focusing on fixing the defence.

At 6ft 2ins, Sala should have the necessary physicality to adapt to the Premier League – although these things are never an exact science and there are plenty of examples to the contrary – and could work as an interesting partnership alongside the more mobile Aleksandar Mitrović.

His expected fee represents a low-risk financial move by a club who spent a lot last summer and who probably won’t grant Ranieri extensive funds in the winter window.