Philippe Coutinho put on a magic show during Liverpool's 4-0 win over West Ham United on Sunday afternoon. The Brazilian was playing in a slightly withdrawn role, as part of a midfield diamond, and he put in quite the performance.

It was a position he excelled in during the 2013/14 season and he looked right at home in a midfield unit made up of Emre Can, Gini Wijnaldum and Adam Lallana. He assisted the opener with a superb threaded ball straight through the centre of the Hammers' team with Daniel Sturridge finished off confidently. The maestro then found the back of the net twice to take his tally for the season to 12.

Fans have been wondering whether Jürgen Klopp would ever use the former Inter Milan playmaker in a centre-midfield role having resisted the temptation to do so for the best part of two full seasons.

In the pre-match build up to the match against Slaven Bilić's team, Klopp finally gave in:

“That is possible and maybe have more influence and we can involve another player on the wing. That would make us stronger for sure, having this creativity in the middle of the park. He would have to adapt to that. He is young, full of talent and I’m pretty sure he thinks he is in the right place.” 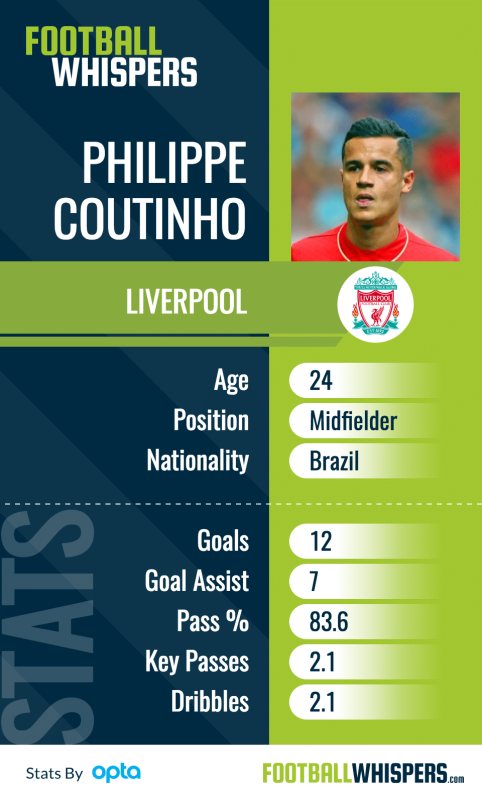 Tongues have been wagging since that interview, and following the Liverpool no.10's Man of the Match performance against West Ham, supporters will be wondering whether the German manager will look to use Coutinho there a lot more next season.

If so, the Reds will need a new arrival to take his position on the left of the attack either in a 4-3-3 or a 4-2-3-1 system. We've taken a look at seven players Klopp and the recruitment team could target.

Mohamed Salah is yet again being linked with a move to Anfield. Melissa Reddy of Goal.com revealed that Liverpool have been forced to move on from Bayer Leverkusen attacker Julian Brandt, with the 21-year-old eager for guaranteed minutes ahead of the 2018 World Cup.

Salah was the name mentioned as the alternative being looked at. He's been involved in 24 Serie A goals this season, including assists in wins against Juventus and AC Milan in his last two matches. He also has five goals and six assists in his last 10 matches.

The 24-year-old would provide a goal threat and add pace to the attack, something the Reds aren't exactly blessed with. However, there may have to be reshuffle if he does arrive with Sadio Mané taking a position on the left and Salah on the right.

READ MORE: WOULD LUAN BE A GOOD SIGNING FOR LIVERPOOL?

Luan was a Liverpool transfer target last summer but a move never materialised. However, Luis Felipe Amorin, a journalist in Grêmio has claimed that the club have accepted a £23million offer from the Reds for the player.

There are a few eyebrows being raised, and rightly so. At 24-years-old he's close to the peak of his powers, and with just a year left on his deal £24million seems steep. On top of that, he's not tried and tested outside of Brazil.

Luan is by no means a world beater, but he would be a good squad player and add depth to the team. His versatility means he's able to not just stand in for Coutinho, Roberto Firmino and Mané but also play alongside them.

According to French paper L’Equipe, Paris Saint-Germain are prepared to sell Lucas Moura this summer if the offer is right. The 24-year-old has been linked with a move to Anfield for three consecutive transfer windows now and it looks as though it's a rumour that will persist until he does actually move.

The Brazilian ticks a variety of boxes. He's as explosive over 15 yards as he is over five. He's versatile and can effectively play anywhere across the attack. He's a goal threat whose goals are transferable no matter what league he's plying his trade in.

He's got a point to prove and Liverpool, with Champions League football, could give him the platform to show why exactly he was so highly rated as a youngster.

The Bayern Munich man has revealed he wants to leave the German club this summer. The 26-year-old is a Juventus summer transfer target and has also been linked with Spurs and Arsenal over recent weeks.

Anfield has played host to a number of performers over the years: from King Kenny to John Barnes to Luis Suarez, and a player like Costa would not only be welcomed, he'd be appreciated.

A player of his undoubted ability should be much more than a part of the supporting cast, which he is in Bavaria. He's made just 14 starts in the Bundesliga this term, nine fewer than last season under Pep Guardiola.

He should share the centre stage and he'd not look out of place alongside Coutinho, Mane and Firmino in one of the most exciting attacks in world football today.

Emil Forsberg recently signed a new deal with RB Leipzig but that won't stop reports suggesting he's set for a move to his boyhood club. The Swedish playmaker has been linked with a move to Liverpool twice before, and it's easy to see why.

Forsberg has a number of strengths, and he shares similarities with Adam Lallana with regards to the way he moves the ball, his general tenacity and the pockets of space he picks up. However, It's been said that the Swede is much more productive than his English counterpart.

Forsberg is used to playing in a front four with RB Leipzig playing a similar system to great success this season as they shocked the league to finish second.

Baldé Keita was linked with a move to Liverpool way back in 2015. It's safe to say the club know all about him and will have been watching him develop at Lazio. Sevilla are reportedly interested in bringing him back to Spain but the player has rejected the claims a deal is almost complete.

The 22-year-old Senegalese forward is having his most productive season to date, having scored 15 goals in Serie A playing on the left of Simone Inzaghi's 4-3-3 system, with seven in his last four matches including a double in the Rome derby.

He's not even close to fulfilling his potential yet either. He's got the raw tools to develop — under the right manager — into one of the best in the world.

The only negative in signing him would be that the team would be without him and Mané for the AFCON.

READ MORE: WHY ARSENAL SHOULD HAVE GIVEN GNABRY MORE CHANCES

Gnabry left the Emirates last summer in search of first-team football. Werder Bremen gave him that opportunity and he's not disappointed. The 21-year-old has 11 goals and one assist in 1,926 minutes of Bundesliga action.

It's this sort of form, along with notching a hat-trick on his debut for Germany, which has seen Gnabry being linked with summer moves to Bayern Munich and Borussia Dortmund. The versatile attacker has played in a number of positions this season as his team managed to turn it around and go from relegation battlers to challenging for a European place.

He's spent the majority of the season on the left and has no problem playing in central areas like the Liverpool attack is expected to do. There's reportedly a release clause in his deal which means he could be available for as little as £10million.