Watford's hierarchy wasted no time appointing Hull City boss Marco Silva as Walter Mazzarri's successor and the Portuguese will have to follow suit in order to get the Hornets ready for a third consecutive season of Premier League football.

The end of Mazzarri's reign was acrimonious. The Italian was unpopular amongst the club's supporters and there were few tears when it was announced he would leave at the end of the campaign prior to the final-day shellacking by Manchester City.

Mazzarri achieved the club's principal goal of securing another year of top-flight football. But in every other metric the former Internazionale and Napoli coach was a failure and has left Silva, so impressive in five months at Hull, with a big job on his hands.

Here's what the former Olympiakos and Sporting Lisbon boss will need to do this summer to give himself the best chance of success at Vicarage Road.

1. Decide on three or four at the back

Watford started 20 games with a back three and 18 with a flat-back four during 2016/17. From the outside looking in that could be considered tactical flexibility from head coach Mazzarri.

But the fact the Italian changed his system from match-to-match or half-to-half was not helpful and his steadfast refusal to ditch three at the back, even when it became so apparent the Hornets were weaker in that shape, was baffling.

He was not, in fairness, helped by the summer recruitment which was undertaken with back three in mind. Wing-backs Daryl Janmaat and Kenedy were signed while right-back Allan Nyom was moved onto West Bromwich Albion.

The first job for Silva at the Hornets' swish London Colney training base will be to decide what shape he will predominantly use next season because that will shape everything else he does. Flexibility is no bad thing but being prepared for it is imperative. 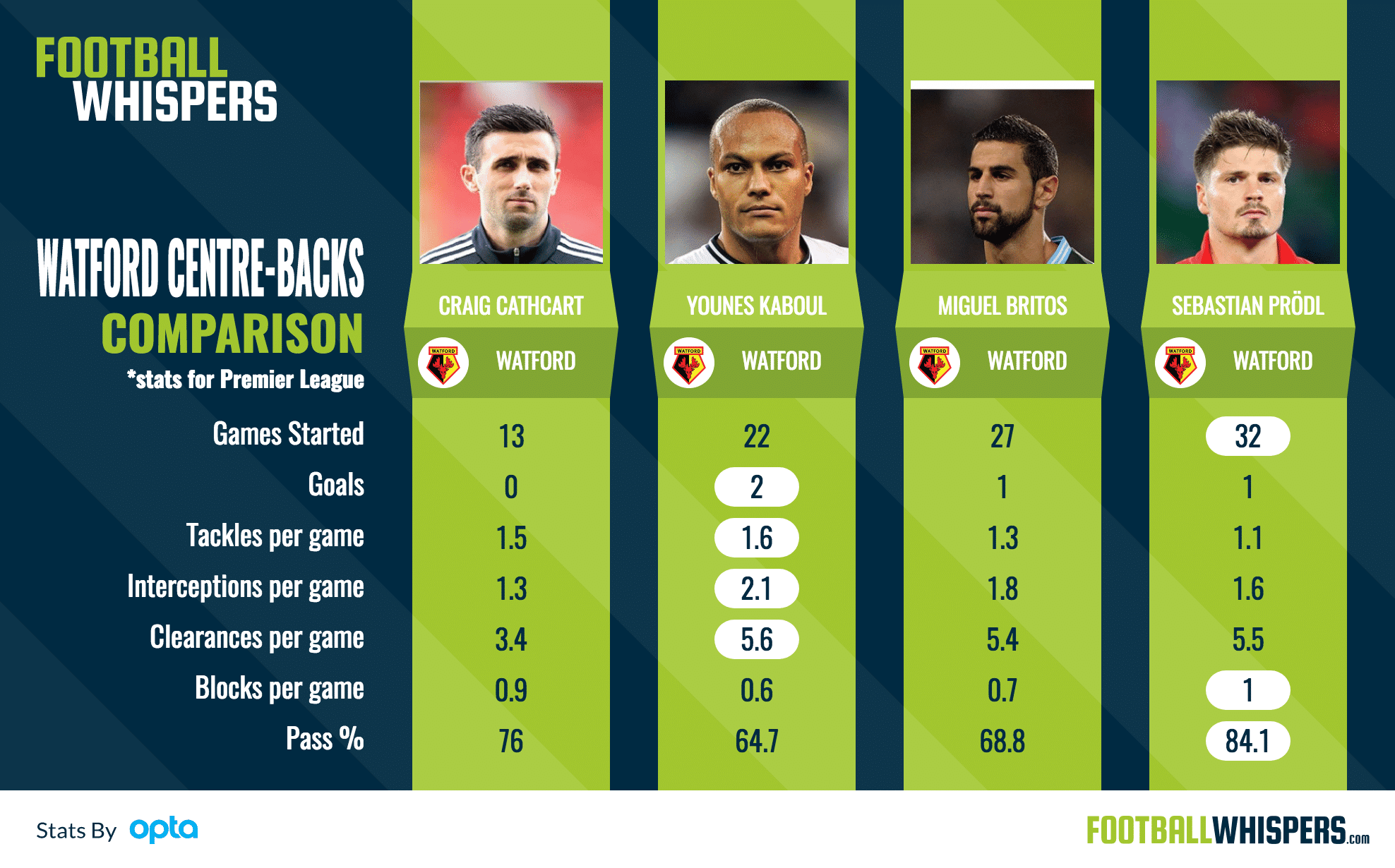 2. Work out his best centre-back pairing

The Hornets went through numerous defensive set-ups last season and only three teams conceded more than the 68 shipped by Mazzarri's men. That was, in part, down to the coach's infatuation with a back three.

But what did not help was the constant chopping and changing of the central defensive axis. Craig Cathcart, so impressive under Quique Sanchez Flores the previous year, was in and out of the side. Miguel Britos was a shadow of the player who had impressed the year before. And summer signing Younes Kaboul blew burning hot or freezing cold.

The one saving grace was Player of the Year Sebastian Prödl. Even the man-mountain Austrian tailed off in the second half of the season but he was the pick – by some distance – of a bad bunch.

Silva must build around the former Werder Bremen defender next season but the slot next to him – or either side in a three – is very much up for grabs.

All that should help tighten the Hornets up from set pieces after conceding the third-most goals (17) from dead-ball situations. Hull (21) had the worst record and Silva will need to address that in WD18.

3. Get the best from Étienne Capoue

The French midfielder failed to score in his maiden campaign at Vicarage Road. Yet, like London buses, once Capoue's first arrived on the opening day of the 2016/17 season, he could not stop and scored four in his first six and bagged a fifth in the November win over champions Leicester City.

But then the Capoue of old returned and he managed just two more in the rest of the campaign with one of those, in a topsy-turvy 4-3 defeat to a heavily-rotated Chelsea side, owing as much to John Terry's calamitous backwards header as anything else.

The former Tottenham Hotspur midfielder has no little ability but his lethargic running style, lack of aggression and tendency to go missing for long periods mean he is not well thought of at Vicarage Road.

Yet this is a player Spurs spent £15million on in 2013 and is someone who has seven caps for the French national team. He is no mug. The challenge for Silva is getting the talented midfielder to maximise his ability and make the impressive performances he can produce become the norm.

The Hornets skipper is one of the few links to the Watford of old; the side that languished in the lower reaches of mid-table in the Championship. He has been on a journey with the club in every sense and earned the right to be the biggest character in the dressing room.

And, in a squad of 20 nationalities, the Hornets need someone who understands what it means to represent the club and its supporters. In a tough season Troy Deeney has been the mouthpiece for the club – rightly or wrongly – while Mazzarri hid behind a poor grasp of English.

But Deeney, by his own admission, has not always got on with Watford's coaches. When Šlavisa Jokanović replaced Billy McKinlay in October 2015 the Hornets' No.9 was not convinced.

“It was kind of, how long’s this clown going to last for? And when’s the next one due?” he told the Daily Telegraph after the Serb guided the club into the Premier League.

“I’m very opinionated,” Deeney said in the same interview. “I like to talk a lot. As a captain, I guess it’s more, look what I do and if you can match it, perfect. Anyone works harder than me, massive respect. I try and lead from the front.”

If Silva can prove to Deeney he is no clown – and given his impressive record to date that shouldn't be much of a challenge – he will have a powerful ally.

5. Inject some pace into the side

With an average age of just over 27 – the second-oldest in the Premier League – Watford are not a young side. Something which is reflected in the lack of pace in the team.

Live-wire Nigerian forward Isaac Success, 21, was the youngest player to feature regularly for the Hornets during the 2016/17 campaign but was restricted to just two Premier League starts and 505 minutes.

The former Granada forward was clearly not trusted by Mazzarri. His pace, acceleration and confidence made him a random element but the Hornets coach did not feel he could rely on him even though supporters were crying out for more.

Without Success the Hornets are ponderous and predictable. The situation was addressed, to an extent, by the loan addition of Milan's M'Baye Niang in January.

But the Everton transfer target will return to Italy this summer and the Hornets are still in desperate need of pace.

With just 40 goals registered the Hornets were the fourth-lowest scorers in the Premier League last season. Which, coupled with their leaky defence, would have been a recipe for relegation had Sunderland not been so appalling and a few others been worse than the Golden Boys.

There has been an over-reliance on a couple of players to score goals in both of Watford's two seasons in the top flight. In 2015/16 it was Odion Ighalo (15) and Deeney (13).

Skipper Deeney followed that up with ten this season and Capoue was just behind on seven. But no-one else got more than five. That will have to be addressed this summer because the Hornets may not get lucky again.

Stefano Okaka showed promise by scoring four times in as season where he only made ten league starts. But the hulking Italian is not fit frequently enough to be relied upon so a new forward has to be the priority this summer.