John Terry may no longer be the defensive colossus he was at his peak but when the Chelsea captain leaves the club this summer there will be a gaping hole that needs filling.

The centre-back's influence at the club was and remains all-encompassing. He is the dressing room leader – the man who welcomes new signings and helps them settle in.

Terry also bridges the gap between Chelsea's first-team and the academy, often attending youth matches, texting the club's army of loanees and even paying for young players' driving lessons before wages soared.

On the pitch, however, his influence has diminished this season. Antonio Conte's introduction of a 3-4-3 system forced Terry out of the side – he hasn't featured in the Premier League since November and hasn't started a league game since September.

So, in the sense of signing a defender to replace a defender, Terry isn't indispensable.

The Blues have an important decision to make, however. They either spend big, signing an established centre-back who would instantly command a place in the side and respect in the dressing room.

Or they can be more cautious, bringing in a younger defender who can flourish under Conte's guidance and become a key player over several seasons.

We've identified six potential replacements for Terry, starting with one the Blues already own.

Christensen joined Chelsea at the age of 16 and the Danish centre-back has long been marked down as a potential first-team player.

Now 21 years old, and coming to the end of a successful two-year loan spell at Bundesliga club Borussia Monchengladbach, next season could be his chance to shine.

Over the previous two campaigns, Christensen has blossomed into one of the finest young defenders in Europe. 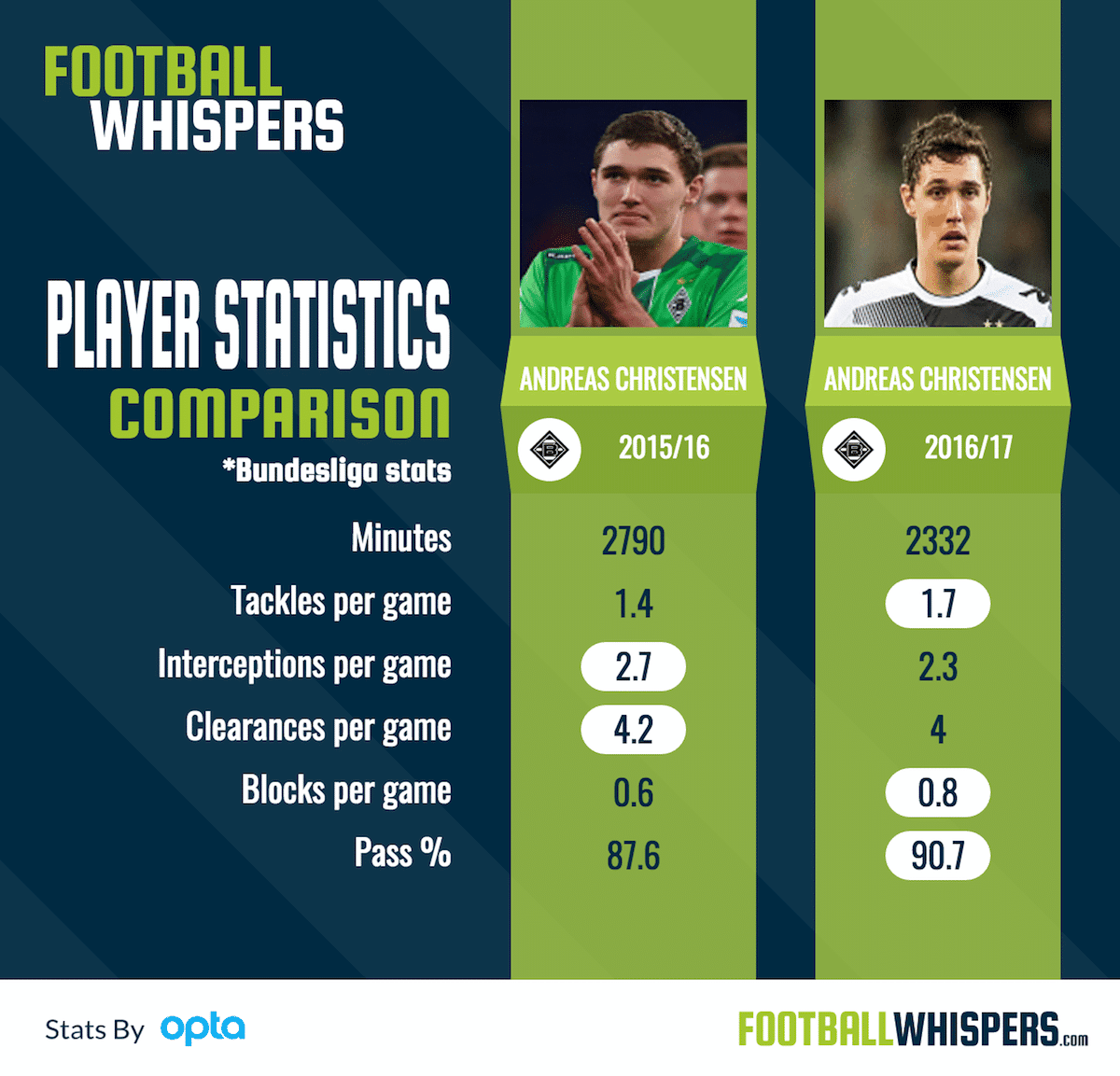 His performances in the heart of the Gladbach back four have become far more consistent this term, which is why he was identified as a Barcelona transfer target in October.

The Denmark international makes more clearances per game (4) than all bar one of his teammates and blocks more shots per match (0.8) than any Gladbach player.

He is far from the finished article, however, and would need to be given time to adapt to Conte's back three. But the reward would be worth the risk given Christensen's immense potential.

Van Dijk has been injured since January but that hasn't stopped interest in the Southampton defender from ramping up over the past three months.

Chelsea would face competition from Liverpool, Everton and Inter Milan in the race to complete van Dijk's signing, but he would be a ready made replacement for Terry.

The 25-year-old has established himself this season as one of the Premier League's best defenders and would command a fee of around £50million. 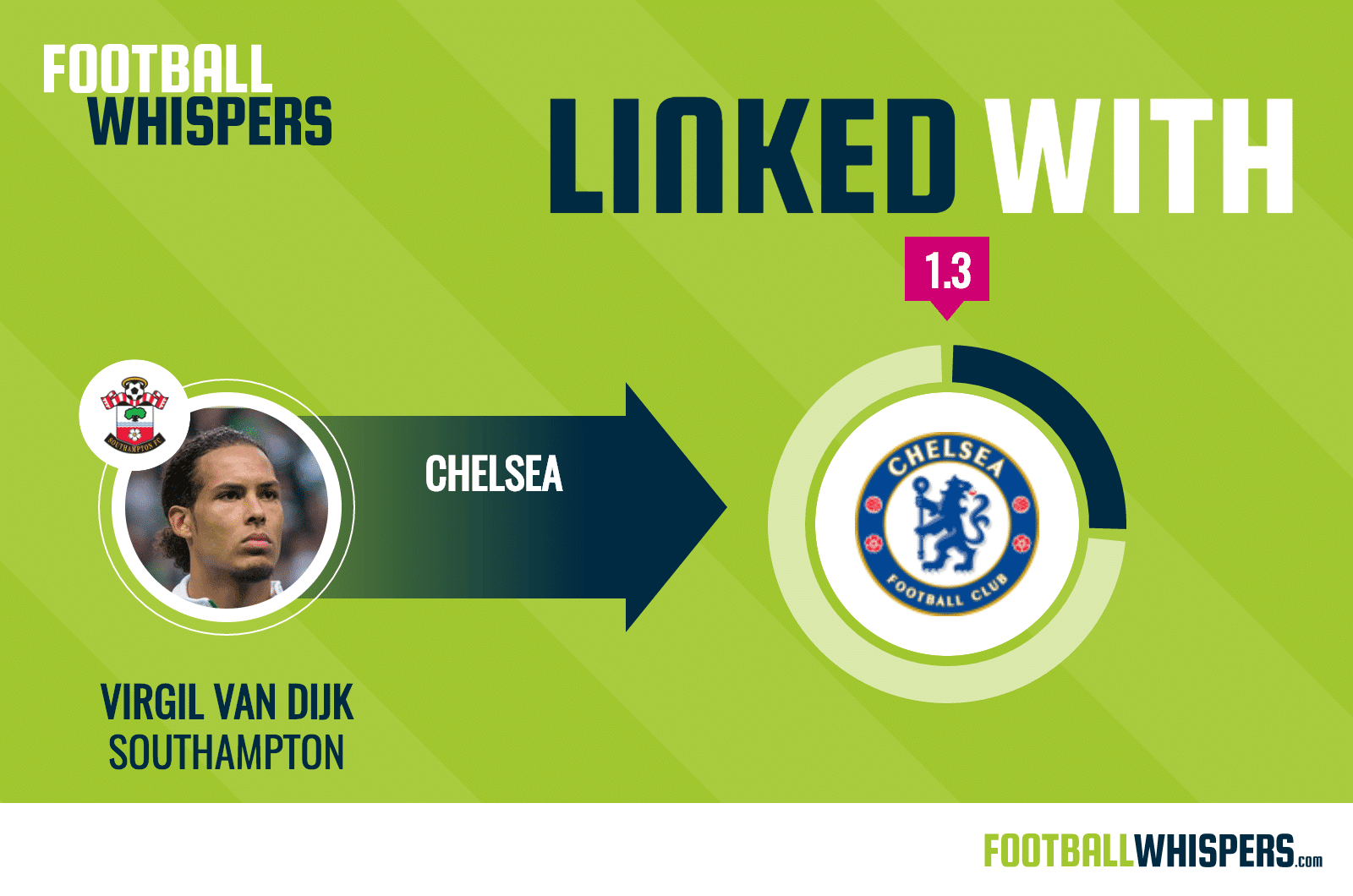 It's a figure unlikely to deter the Blues. Van Dijk has proven his worth, making more interceptions and clearances per game – 2.6 and 6.8 respectively – than any player at Southampton or Chelsea.

His passing has also improved this term with his accuracy increasing from 83.1 per cent to 84.2.

If Chelsea were to sign van Dijk the only problem that Conte would have is who to drop from his back three. The Netherlands star is far too good to be stuck on the bench.

The Portugal defender is out of contract at Real Madrid this summer and is likely to leave on a free transfer after failing to agree an extension with the Spanish club.

Pepe would be a cost-effective replacement for Terry but not a long-term one given he turned 34 in February.

Yet his age shouldn't put Chelsea off. The defender remains a consistent performer when called upon by Zinedine Zidane.

In his 13 La Liga appearances this season, Pepe has made more clearances per game (5.2) than any other Real Madrid defender and matches Sergio Ramos' 0.5 blocks a match.

By comparison, Terry, who is two years Pepe's senior, has averaged 3.4 clearances per game this term and 0.4 blocks.

With Gary Cahill now 32 years old and David Luiz 30, signing Pepe on a two-year deal to provide cover and top level experience could prove to be a shrewd move. 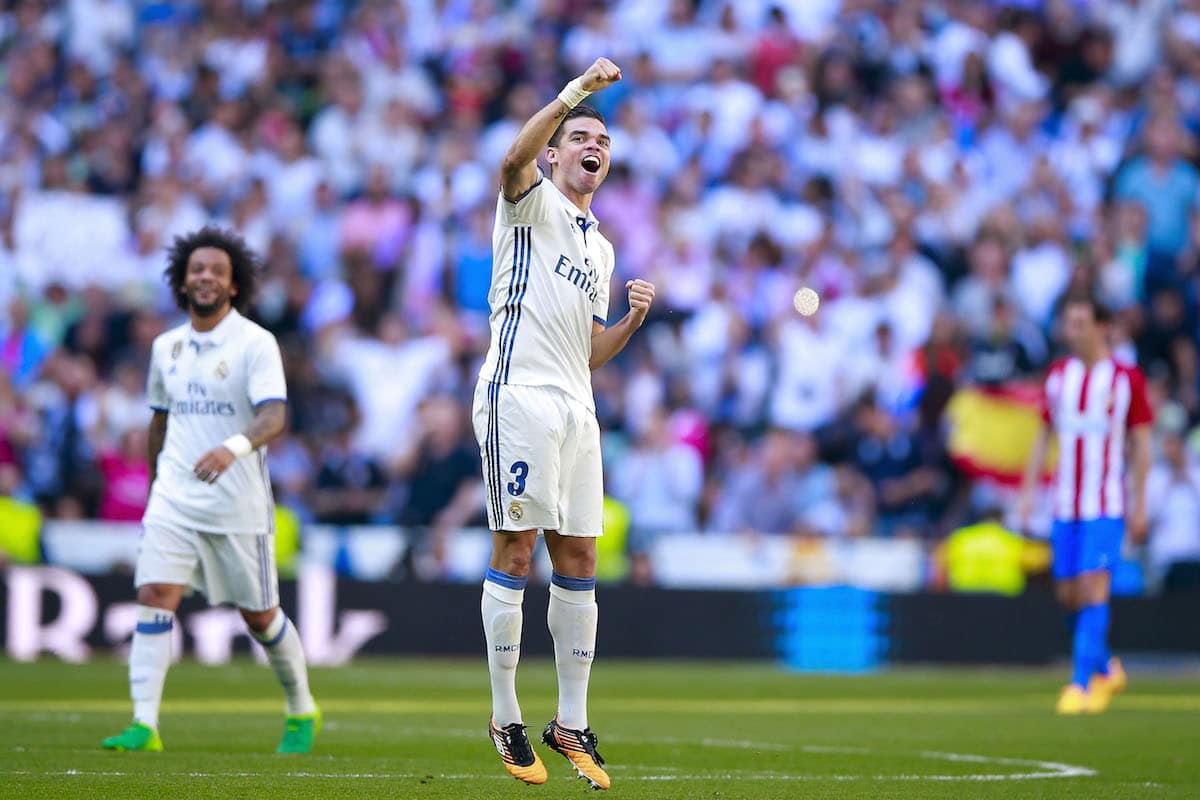 The centre-back has been watched by a number of Premier League clubs this season due to his steady displays in the heart of Middlesbrough's back four.

Gibson has made the step up from the Championship with minimal fuss and has helped Boro, who sit 19th in the table, keep ten clean sheets this season, the sixth highest in the division.

The 24-year-old would cost around £30million and while he may not immediately command a starting place at Stamford Bridge, he could be the long-term homegrown replacement for Terry.

A player who could learn of the likes of Luiz and Cahill before cementing himself in the side over the next couple of years.

Chelsea pushed hard to bring the Napoli defender to Stamford Bridge last summer but came up short and decided to re-sign David Luiz instead.

However, Conte remains a fan of Koulibaly and may attempt to sign the Senegalese defender at the second attempt.

The 25-year-old has enjoyed another solid campaign in Serie A, although he hasn't perhaps hit the heights of his performances during the 2015/16 campaign. 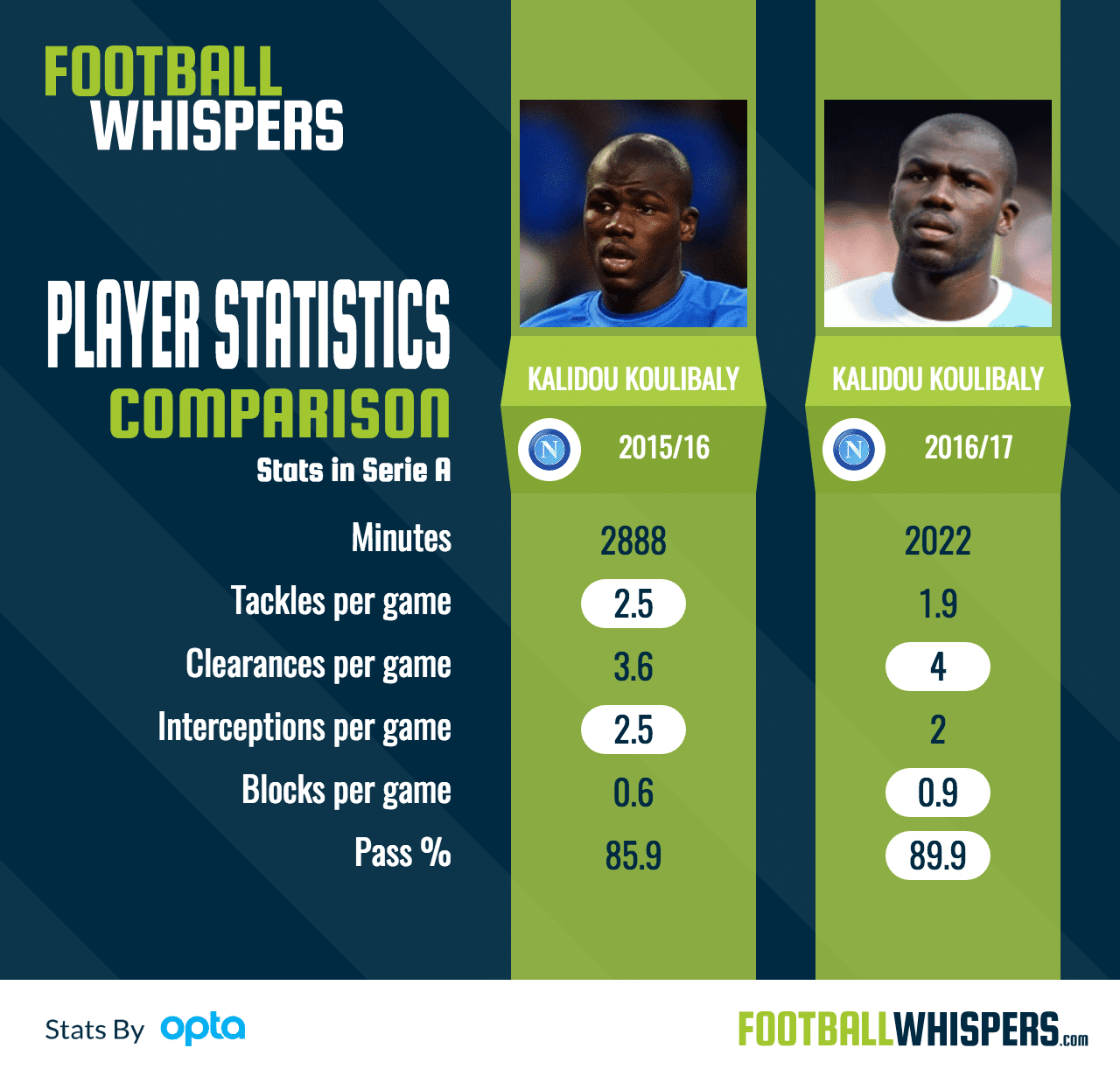 Chelsea reportedly had an offer of £58million turned down by Napoli last summer, a similar bid made at the end of the current campaign may be too difficult to ignore.

Much like van Dijk, Koulibaly would be able to make an instant impact at Stamford Bridge given his experience in both Italy and in the Champions League.

His average of two interceptions a match are the highest of any Napoli player while no member of the Chelsea squad makes more blocks per game (0.9) than Koulibaly.

According to reports, the Blues have already held discussions with the France Under-21 centre-back and are willing to pay £15million to bring him to Stamford Bridge.

Diop has impressed at the heart of the Toulouse defence this season and, given he is only 20 years old, could provide the Blues with a long-term replacement for Terry. 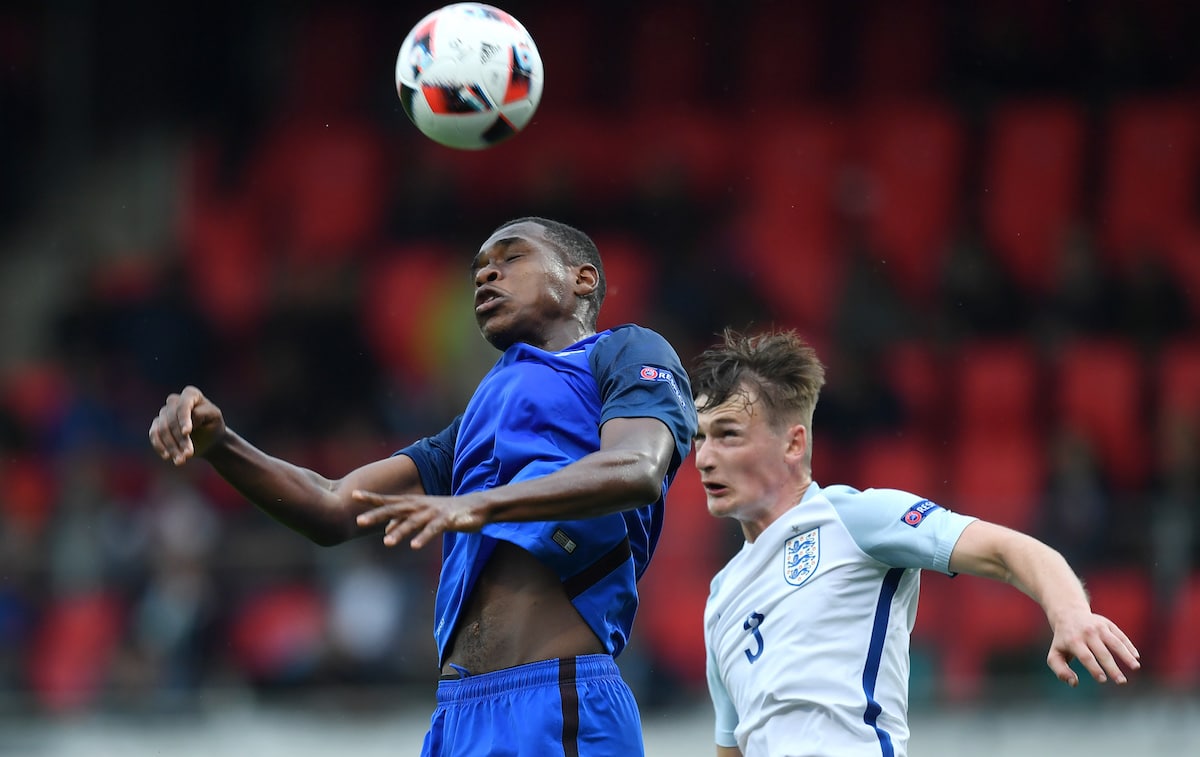 He isn't ready just yet for the Chelsea first-team and he wouldn't oust any of the current back three, but his stats this season are promising.

Diop makes an average of 1.7 tackles and interceptions a match. He plays a more reserved role in the back four, with central defensive partner Christophe Jullien winning more headers and aerial duels.

A season working with Conte and learning from the experienced defenders at the club may be what Diop needs before making a real impact at Stamford Bridge.