On top of that, they knocked out Manchester City on their way to the FA Cup final, where they defeated champions Chelsea with a surprisingly effective performance that left many wondering if Arsène Wenger would persist with the same formation going forward.

The French boss had never previously shown much intent to use a back three, but the tactical change brought about a crucial turnaround in fortunes at a time when his future was on the line. He has good reason to keep the faith with the 3-4-2-1, but if he does a few new signings would come in handy.

Arsenal have already brought in Alexandre Lacazette from Lyon and Sead Kolašinac from Schalke in a bid to reinforce their squad for the 2017/18 campaign. But a few more key areas, including central defence, midfield and inside forward, could do with strengthening.

Here, Football Whispers profiles six players the Gunners could bring in to perfect their new system.

In recent seasons, de Vrij has established himself as one of the finest centre-backs in Serie A, a league of rigorously organised defences. The Dutchman’s presence has been crucial to Lazio – in the two campaigns he has been fully fit and available, they finished third and fifth; in 2015/16, a campaign he missed much of through injury, they finished eighth.

The resolute 25-year-old is mature beyond his years. He made his debut for Feyenoord back in 2009/10, meaning he already has eight seasons of top-level football under his belt. He was also integral to the Netherlands’ run to the semi-finals of the 2014 World Cup.

In that competition he featured on the right of a back three, though for Lazio de Vrij plays a more central role. His versatility, physicality and underrated passing ability would make him an excellent addition to Arsenal’s back three.

Perhaps more intriguing than RB Leipzig’s rise up the Bundesliga table last term was the remarkable progress made by Hoffenheim. Thanks to the intelligent tactical choices and guidance of Julian Nagelsmann, they finished fourth and secured a shot at Champions League football in the process.

A number of their players ascended from obscurity during the 2016/17 campaign, one of which was Hübner. Operating on the left of a fluid back three, he provided assured defensive work and tidy distribution when in possession.

Thanks to him and his team-mates, Hoffenheim had the second-best defensive record in the Bundesliga. And, while at 28 years of age he is no prospect, he would provide a more natural option for the left-hand side of Wenger’s back three.

Without a catchy name or obvious on-pitch assets such as searing pace, athleticism or trickery, Milinković-Savić has been able to impose himself quietly at Lazio over the last two years. The Serbian midfielder has displayed a mixture of qualities in Italy that would interest Arsenal.

Firstly, he is combative and physically gifted, an assertive presence who can challenge aerially and outmuscle opponents. Secondly, he is technically refined. He has a smooth touch and can open up a defence with a pass. Thirdly, he is able to play in a number of different positions, from central midfield to second striker. 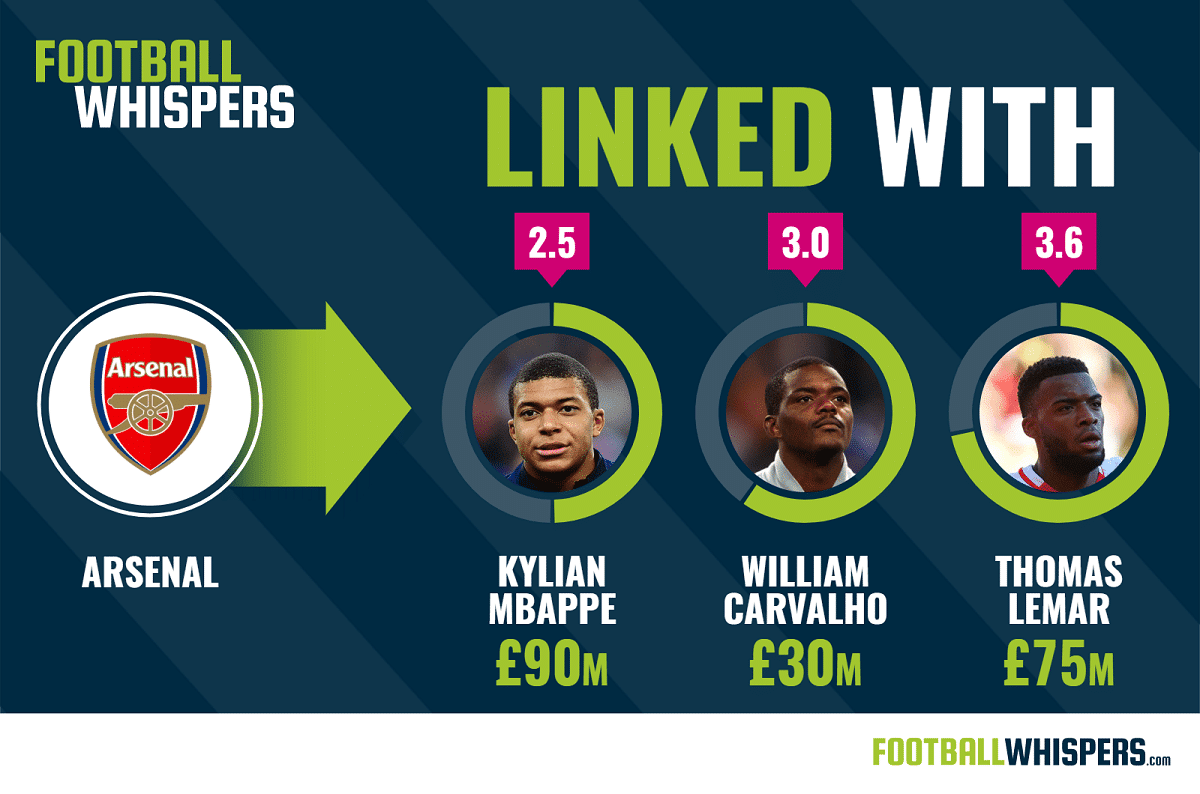 If Arsenal are to persist with the 3-4-2-1, they will need inside forwards. Milinković-Savić would fit the bill in this respect, providing intelligence, aggression and penetration to progress attacking moves.

It wouldn’t be a transfer window if Arsenal didn’t sign a French player. And, while they have already brought Lacazette in this summer, they would be wise to also move for his compatriot N’Zonzi.

The 28-year-old’s career has been a strange, winding one. He went from the French second tier to Blackburn Rovers, then Stoke City in the Premier League. Without truly catching the attention of top English clubs, he was snapped up by Sevilla. In Spain he has proven to be a revelation.

Not only is N’Zonzi a strong defensive shield, but he is positionally aware. He can drop back to help in the build-up of possession, or push forward to win it back. Were Arsenal to go for him, they wouldn’t have to worry so much about losing the ball in their own half.

Last season, Suso went from AC Milan fringe player to Serie A superstar. Finally living up to his immense early billing, he showed creativity, ingenuity and world class control to thrive in an inside forward role.

With a left foot that could splice the most compact of back lines, the Spaniard is unsurprisingly attracting interest from several other top clubs. Indeed, it has been reported that he is a Tottenham Hotspur target. Arsenal should rival their neighbours for the player’s signature, however.

Mesut Özil’s form was a bone of contention for many last term, and the German could do with some competition. Suso is in a similar mould and, at 23 years of age, his best years are still well ahead of him.

In 2016/17, Sampdoria assembled one of the most enticing collections of young talent seen in Europe. But this summer that collection has been picked apart by some of the continent’s most ambitious and prestigious clubs.

Milan Škriniar has left for Inter Milan and he could soon be joined at the San Siro by Patrik Schick after the Czech’s proposed move to Juventus fell through due to a medical issue. Meanwhile, Bruno Fernandes has moved back to Portugal to join Sporting Lisbon.

Torreira could follow the aforementioned trio out the exit door – he has been linked to a variety of clubs of late, and it’s easy to see why. The 21-year-old is an unrelenting ball-winner with exceptional energy and awareness. He covers ground quickly, presses intelligently and passes efficiently.

If Arsenal are looking for a talented midfield battler to safeguard their defence for years to come, they needn’t look any further than the feisty Uruguayan.