Average home crowds in excess of 50,000, the city to themselves and an owner who is one of the wealthiest men in the country; for many clubs that would be something of a dream ticket. But despite such riches the reality for Newcastle United and their long suffering supporters is that they have gone almost half a century without winning a major trophy.

In an era when fans like to talk about their history, or lack of it, the Magpies can boast plenty. They’d bagged six FA Cups before Liverpool had any, and between 1905 and 1955 had won no less than ten major domestic honours. But a fact that so many Geordies will be aware of is that 1969 was the last time they achieved success (if you don’t include the Intertoto Cup) and even that was in a competition that is now defunct.

That Inter Cities Fairs Cup win back in 1969 might have slipped under the radar for many clubs in an era when the Champions League seems to be the only tournament in town for England’s elite; however, for Newcastle it is not only a sliver of glory worthy of celebrating, but something of a line in the sand moment when it comes to a five decade long trophy drought.

Not only that, but if you discard this victory in a competition that vanished around the same time as the Dodo, you have to go back to 1955 for Newcastle’s last domestic cup glory – no wonder they still hold the Fairs Cup in such high esteem in the North East.

So why then are we so surprised that a club which has spent more time being unsuccessful than successful have gone so long without winning anything? Is it just a form of patronising sympathy for a team that many of us have no real beef with or can Newcastle genuinely stake a claim to be one of the giants of the English game?

Without a doubt the early part of the 20th century was the most successful time in the history of Newcastle United. They won the First Division title in 1905, 1907 and 1909 and despite losing in the final in 1905 and 1906 went on to win the FA Cup six times between 1910 and 1955, with that most recent “success” being their last domestic honour to date.

In that time over thirty different clubs have won one of the three major prizes in the English game, but not the Magpies, and despite signing some of the biggest names in football, most of their fanatical supporters have never seen them win a thing, with the exception of THAT Fairs Cup. 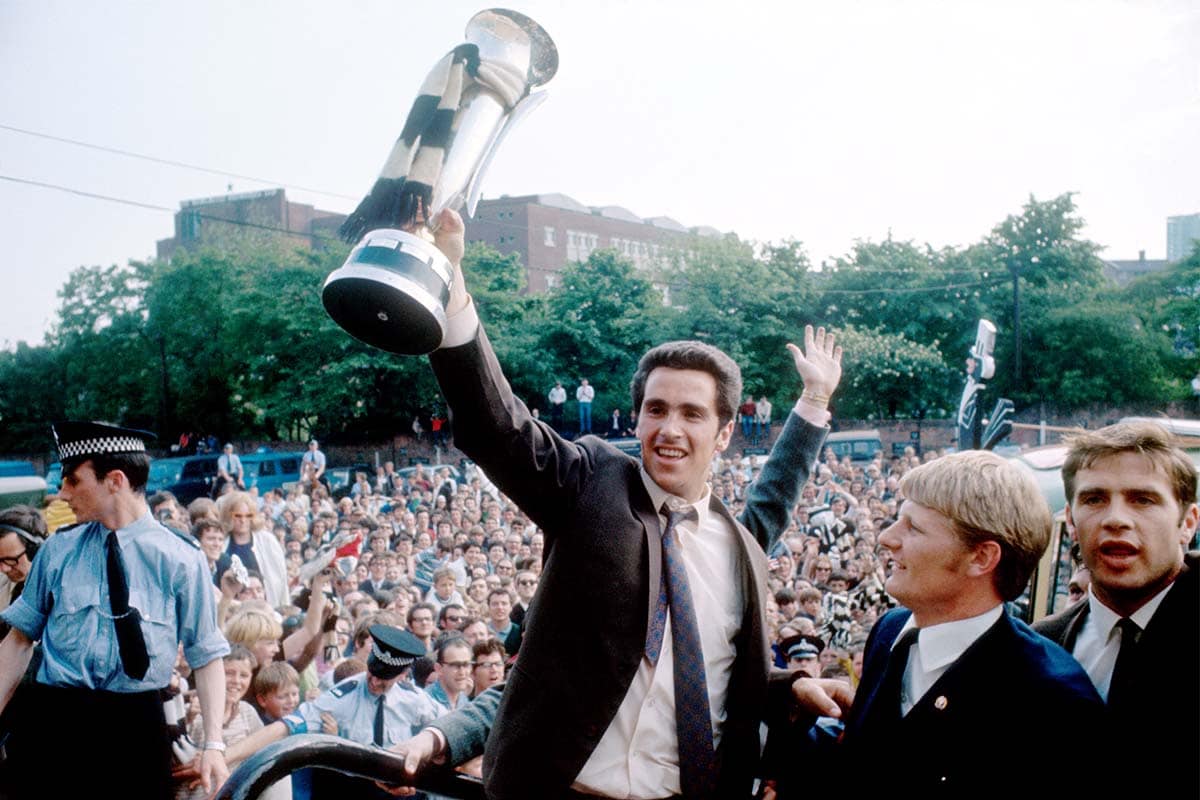 That win in 1969 had come at the end of a decade of mixed fortunes for the club. After the highs of the 1950s the club slipped into the Second Division in 1961 under the leadership of former Manchester United player Charlie Mitten, despite having players like ‘Wor Jackie' Milburn and Bobby ‘Dazzler,' in the side.

It would eventually be former skipper Joe Harvey, who had captained the club to much of their post-war success, who would return as manager and rebuild United into a side to be reckoned with once again as the Magpies returned to the top flight as Second Division Champions in 1965. And it was at the club’s first time of asking that they achieved European success when they beat Újpest FC of Hungary over two legs in what was to be the forerunner of the UEFA Cup.

In the years that followed that European success, the club welcomed a string of talented entertainers who thrilled the Newcastle crowd. Pleasers like Jimmy Smith, Tony Green and Terry Hibbitt but particularly a new centre-forward by the name of Malcolm Macdonald.

“Supermac” was one of United's greatest cult heroes. Strong, Fearsome and a lethal goal scorer, he led United to Wembley in 1974 to face Liverpool in the FA Cup final. But the Magpies failed to bring the trophy back to Tyneside in what was to be the first of a number of cup disappointments.

The very next season, despite a mediocre league campaign under new boss Gordon Lee, the club appeared in their only ever League Cup final, but were defeated by Manchester City and the club would spend the next decade or so yo-yoing between divisions as a succession of different managers attempted to reverse the club’s faltering fortunes.

If the 60s and 70s were to be a time of anticipation followed by disappointment the 1980s wasn’t to be much different. But what this decade did show, if we ever needed proof, was how much their most passionate fans love a folk-hero and in the space of a decade they were fortunate enough to have a couple.

Following Malcolm MacDonald’s sale to Arsenal the “Toon” fans had little in the way of a real talisman, someone who would give them belief, a player who would represent passion on the pitch in the same way that they did on the terraces. But that was all to change in the summer of 1982 when a two-time European Footballer of the year arrived on Tyneside.

United were languishing in England’s second tier when Kevin Keegan arrived in something of a shock move from Southampton, but such was the free-flowing nature of the football he inspired alongside the likes of Peter Beardsley and Chris Waddle, United stormed into the top division once again playing a free-flowing game that would eventually take them to within a whisker of winning the league title a decade or so later.

But despite having one of English football’s greatest talents, Paul Gascoigne, in their ranks the 1980s remained a fruitless time at St James’ Park and when “Gazza” decided to follow high profile departures such as Chris Waddle and Peter Beardsley out of the club and join Tottenham in the summer of 1988, the effects on the pitch were disastrous. Newcastle finished bottom of the league for the first time in their history and were relegated once again in 1989.

With the club hovering on the brink, Newcastle needed a saviour and not only found one, but two, as Sir John Hall and Kevin Keegan joined forces to create a formidable duo.

When Keegan returned to Tyneside in 1992 to replace Ossie Ardiles as manager United were struggling at the wrong end of the second tier. Sir John had all but taken control of the club but there was a real probability that the Magpies would fall into the Third Division for the very first time in the club’s history.

If Sir John was to turnaround this near bankrupt club then avoiding relegation was his priority and just as in his first spell at the club, Keegan's presence alone captivated the region. United's supporters, so often with little to get excited about, became expectant  again over-night and crowds which had dropped-off dramatically would return once again. 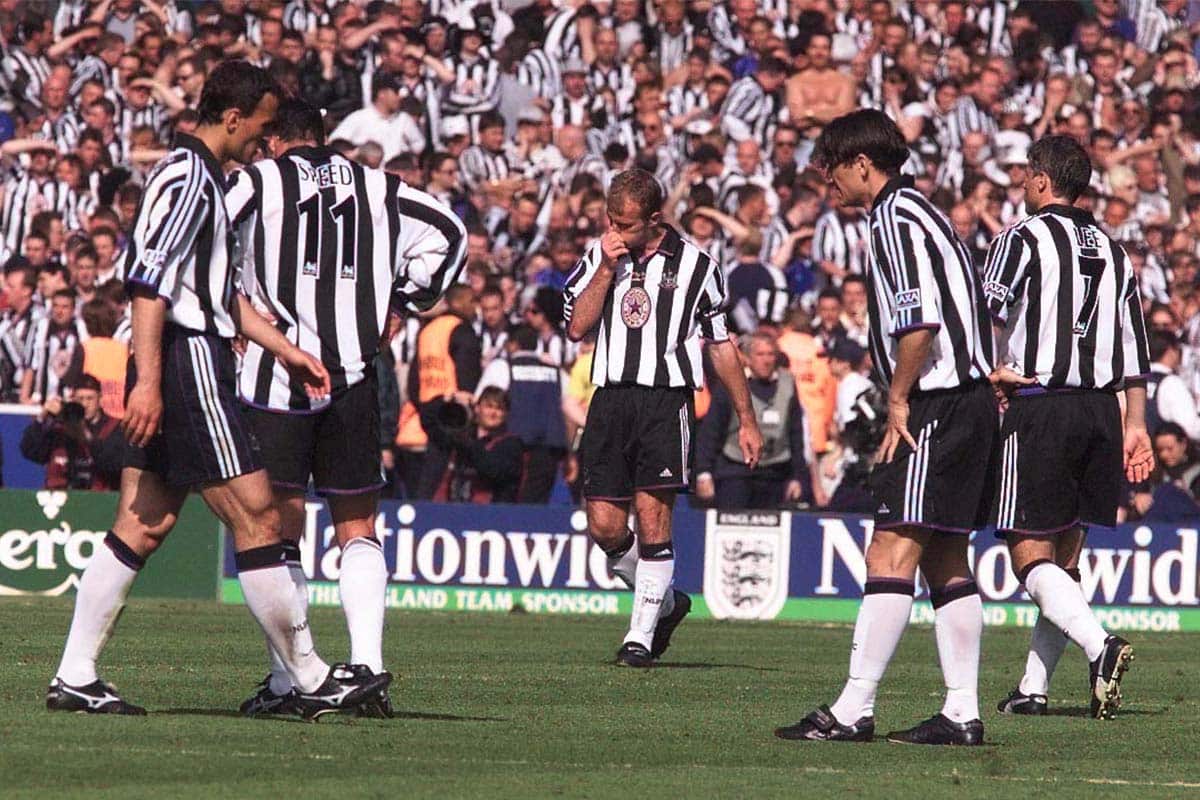 READ MORE: WERE NEWCASTLE'S ENTERTAINERS THE BEST SIDE NEVER TO WIN THE pREMIER LEAGUE?

They packed into St James’ Park and United survived. Sir John Hall would now turn his attention to a master plan to develop United into one of Europe’s elite. Kevin Keegan stayed on as manager and the impact was instant.

Promotion was secured and the newly formed Premier League added a new name to its ranks. The Black'n'Whites joined the elite for the 1993-94 season and quickly became recognised as a force, almost winning the title in 1996 after surrendering a 12 point Christmas lead to only miss out on the final day of the season thanks to the addition of players like David Ginola, Tino Asprilla, Alan Shearer and Peter Beardsley.

In 1998, and with Kenny Dalglish in charge, Newcastle qualified for the Champions League and also reached the FA Cup final only to fall to Arsenal. With another big name at the helm, Ruud Gullit, Newcastle again got to the FA Cup final the following year, losing on this occasion to Manchester United.

But this was as close to glory as the club would get since the halcyon years of the 1950s and despite a series of top name managers, including former England boss Bobby Robson, the club were unable to add to their trophy haul, despite securing themselves a place as perennial European contenders.

What’s more, the takeover of the club by billionaire businessman Mike Ashley in 2007 has been anything but successful in the eyes of most Newcastle fans; despite the return of Kevin Keegan for a third spell at St James’ Park and the introduction of a number of expensive internationals to the playing squad.

Keegan spent less than a year in the job, and in a parting shot at the club’s new owner claimed: “a manager must have the right to manage and clubs should not impose upon any manager a player that he does not want.”  His departure heralded another influx of managers, including former Wimbledon boss Joe Kinnear, and former fan favourite Alan Shearer.

Even so, the club slid to another relegation in 2009, and though promotion was swift the club seems to have been unwilling to learn from past mistakes. Even Alan Pardew, who had elevated United to mid-table security, as well as taking them to a Europa League quarter final, would leave the club on bad terms following an ongoing battle with owners and fans alike.

And despite the latest wave of optimism brought about by another promotion, there is a very real prospect of this giant of a club making it 50 years without getting their hands a major trophy. As the song goes; “Look to the future now, it’s only just begun.”

READ MORE: 5 MUSTS FOR RAFA BENÍTEZ IN THE PREMIER LEAGUE