José Mourinho is said to have as much as £300million to spend on his Manchester United side this summer, so it stands to reason that the Red Devils are being linked with big-money moves for a who's who of Europe's best players.

Clubs were put on alert when Real Madrid‘s James Rodríguez, was left off the bench as the Spanish side beat Juventus in the UEFA Champions League final in Cardiff. The Colombian, who starred at the 2014 FIFA World Cup became a transfer target for Chelsea, AC Milan and United.

According to reports on Wednesday, the Italian giants, who themselves have made huge moves already this window, pulled out of the race, supposedly leaving the Manchester club as the front runners for Rodríguez.

Milan were unwilling to match the £50million it will reportedly take to land the former Monaco playmaker, putting United in pole position, but also suggesting that Mourinho could now land his man in a cut price deal.

Back in May, it was suggested that Rodríguez had already agreed personal terms with United, which could mean a deal isn't far away if the Portuguese boss deems that the Real Madrid man is a missing piece of his puzzle.

There is also debate over whether Rodríguez would be a suitable signing for the red half of Manchester, who are already fairly well stocked in the positions that he can play. Many believe the Red Devils should not fork out upwards of £50million on a player who has spent most of the last two seasons on the bench at the Santiago Bernabéu.

We've taken a look at five ways United could line up next season with Rodriguez in the side.

Top scorer and Player of the Tournament at the 2014 World Cup, Rodríguez shone for Colombia as a No.10, operating behind the frontline and ahead of the midfield, creating chances for others and scoring himself.

This is also the position that the 25-year-old starred in for Monaco after being converted from a winger in his Porto days.

With Real Madrid‘s preference for 4-3-3, Rodríguez has not had many opportunities to play in a similar role for Los Blancos, but there is little doubt that he is best as a No.10, where his dribbling, vision and shooting technique can wreak havoc on opposing defences.

Mourinho regularly sent his side out in a 4-2-3-1 formation last season, with a rotating cast of Wayne Rooney, Juan Mata, Paul Pogba and Henrikh Mkhitaryan in the central attacking midfield role. Doing so with Rodríguez at No.10 would make a lot of sense. 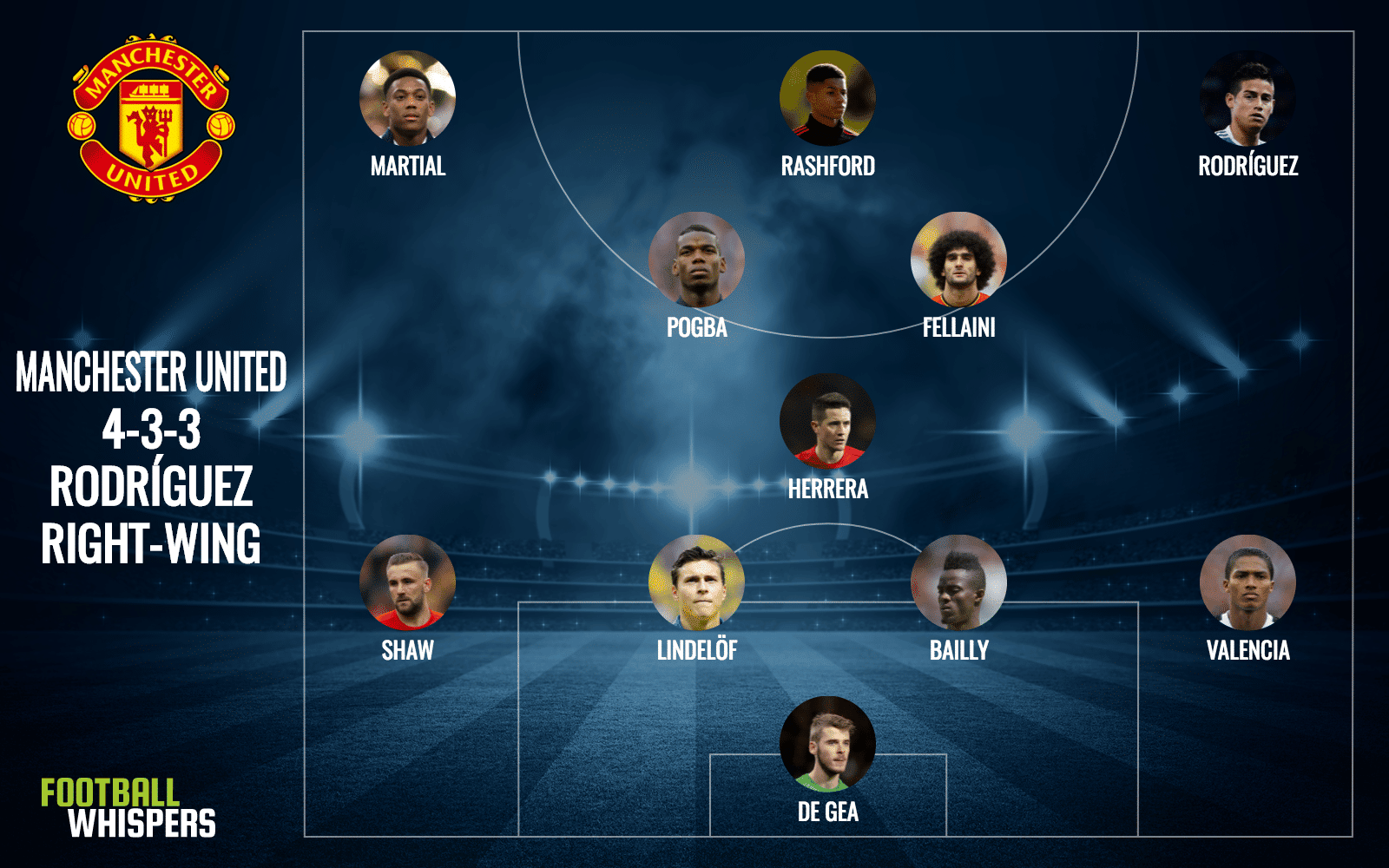 The majority of Rodríguez's appearances for Real Madrid over the last two seasons have come as a right winger in Zinédine Zidane's 4-3-3 set-up, usually deputising for Gareth Bale when the Welshman is unavailable.

Rather than acting as an orthodox flanker, aiming to beat the full-back around the outside and whip crosses into the box, as a left-footer, Rodríguez plays as an inverted winger, looking to come inside at every opportunity.

The 54-cap Colombian international often benefits from more freedom in this position, as he is able to drift into the central areas which he favours without being picked up quite as easily as when he starts as a No.10. However, the increased defensive workload that is inherent with playing on the wing becomes an issue.

That would be even more apparent in a Mourinho side. Eden Hazard was constantly criticised for his inability to track back and it's the same issue that stopped Mkhitaryan from making an instant impact. Rodríguez would have to adapt his game to be able to play out wide. 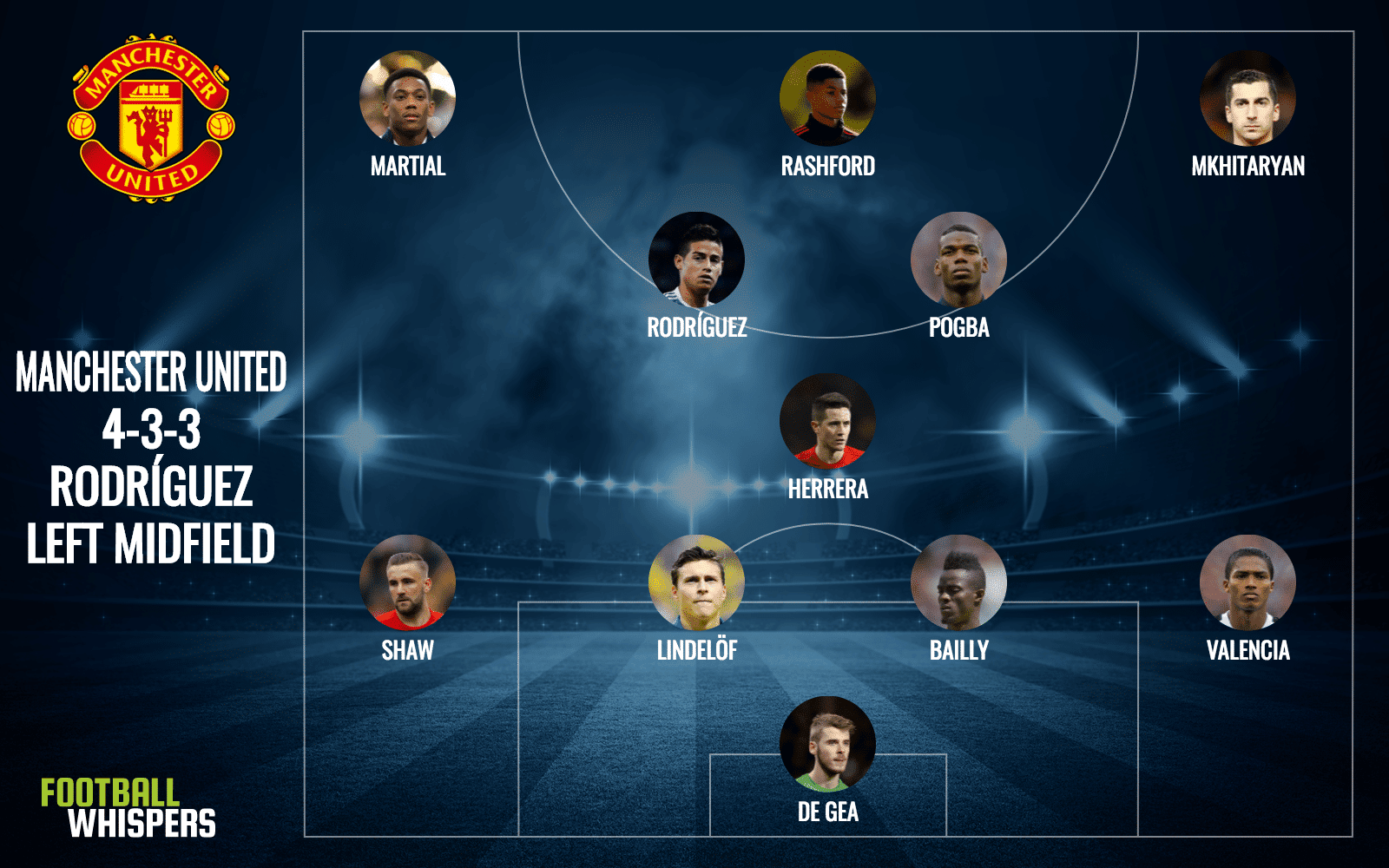 When Rodríguez signed for Real in the summer of 2014, Argentinian winger Ángel Di María was the man who had to make way for the newcomer, and was sold to United in a then-British record £59.7million deal.

Although Di María spent most of his tenure at the Bernabéu as part of the front three, he played his best football under Carlo Ancelotti on the left of the midfield trio, putting in a man-of-the-match display in the 2014 Champions League final victory over Atlético Madrid in his new position.

Ancelotti decided to slot Rodríguez straight into the same role, and the Colombian played his best football in Spain in that position.

From there, the former Porto playmaker was able to link with Cristiano Ronaldo on the left, providing width when the Portuguese superstar drifted inside. He also offered a threat on the counter with his pace, the ability to relieve pressure by carrying the ball over distance, and create openings through intelligent use of the ball.

If Mourinho decides that 4-3-3 is the way to go for United next term, he could replicate Ancelotti's use of Rodríguez. This would mean moving Pogba out of his favoured position on the left of the midfield three, but it would still represent a better use of the Frenchman's talents than shackling him with too much defensive responsibility by playing him deep in a 4-2-3-1.

It would also offer another dimension away from relying on 35-year-old midfield anchor Michael Carrick. Ander Herrera could drop deeper, Pogba on the right and Rodríguez taking on that role on the left. 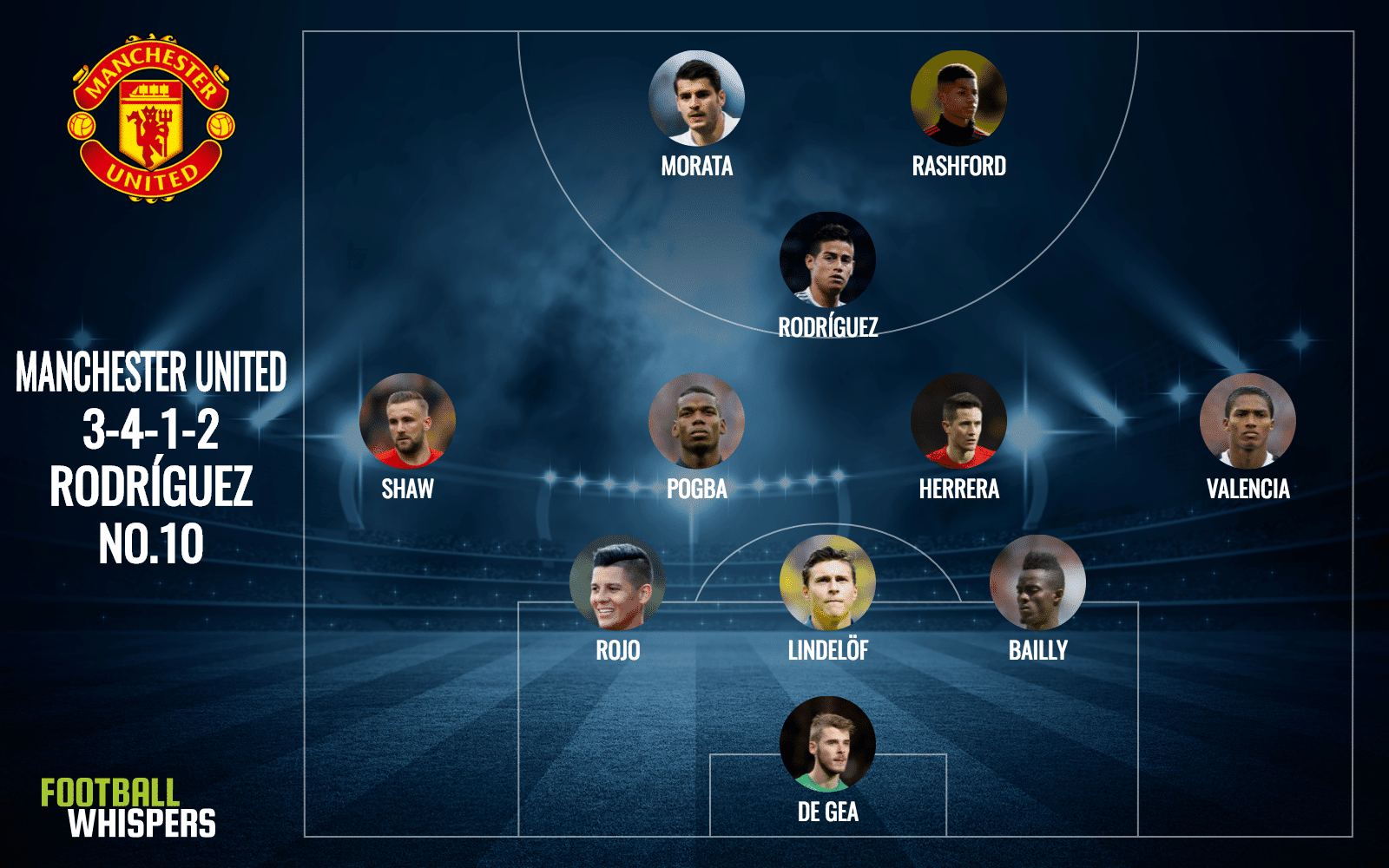 Following the success that Antonio Conte has enjoyed with a back three-based system at Chelsea, many Premier League managers followed the Italian tactician's lead.

Mourinho was no exception. Despite having never regularly utilised a back three at any point in his career beforehand, the Portuguese boss experimented with variations of 3-4-3 and 3-5-2 during the second half of the 2016/17 campaign.

If the former Real Madrid and Inter Milan coach wishes to persist with three at the back next term, Rodríguez opens up an array of options.

Playing the 25-year-old as a No.10 behind two central strikers in 3-4-1-2 allows Rodríguez to operate in his favoured position. The increased space and passing options opened up by a mobile strike partnership — be that Marcus Rashford and Anthony Martial, or even some combination including reported transfer target and Real team-mate Álvaro Morata, could see the Colombian shine. 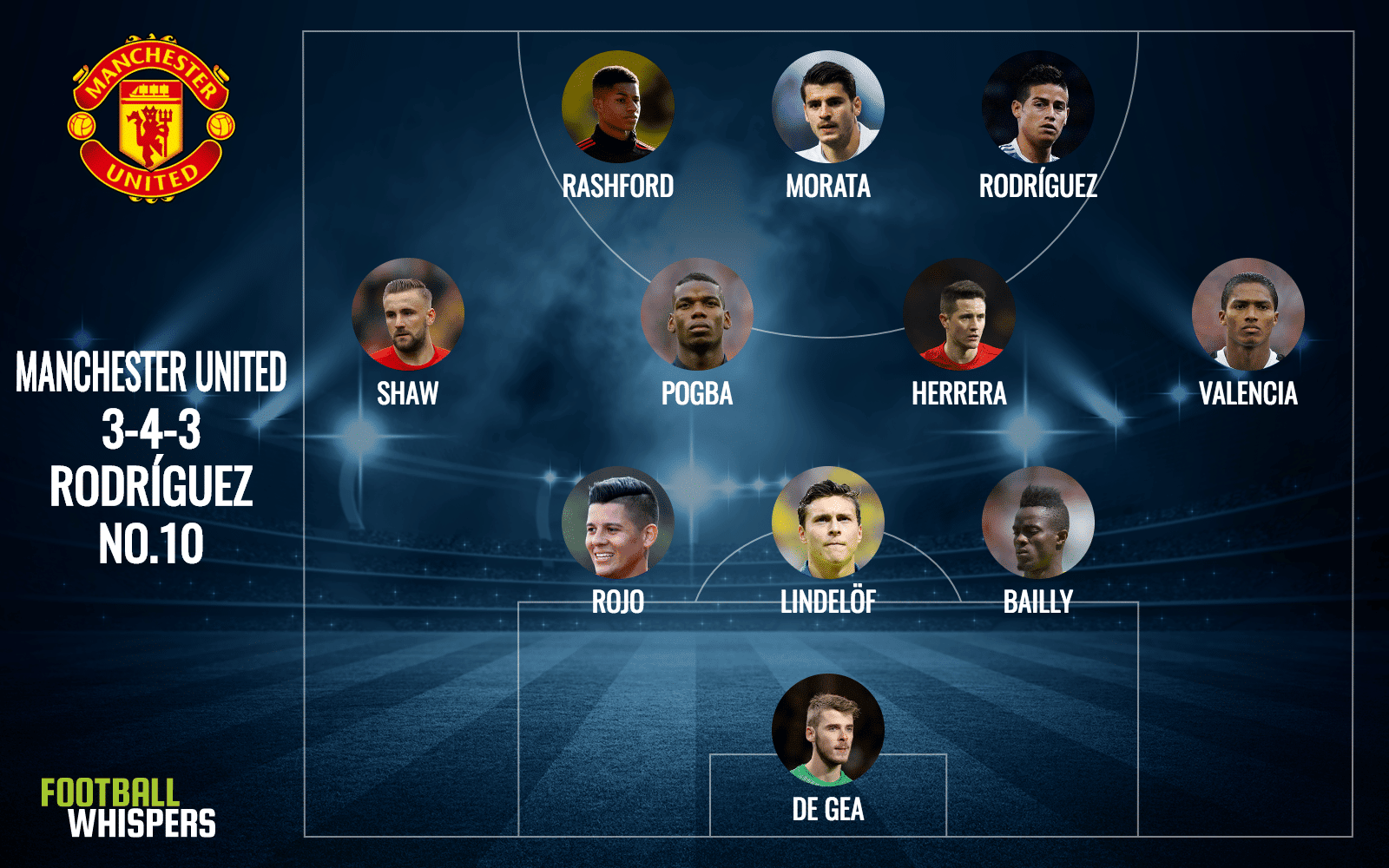 Alternatively, if Mourinho has designs on replicating the 3-4-3 shape that has led Chelsea to Premier League success, Rodríguez has all the tools to be an outstanding inside-forward.

Having seen the breathtaking performances that Eden Hazard has put in on the left of the Blues' front three — where he is closer to the central striker and stationed in the half-space between the opposition's right-back and centre-back — Rodríguez could do the same on the right.

With his dribbling, passing, shooting and general creative skills, moving Rodríguez a little closer to the opposition's goal, and nearer to a central striker, could pay huge dividends.

Even if Morata doesn't arrive at Old Trafford, there's little doubt that Mourinho will be adding a striker too. Giving Rodríguez someone to target is key and playing just off a top-class forward could get the very best out of both new signings next season.