After failing in their efforts to land Antoine Griezmann from Atlético Madrid, Manchester United are believed to have turned their attention to securing a top-quality striker this summer.

The French superstar elected to remain with Los Colchoneros after the Court of Arbitration for Sport (CAS) decided to uphold the club's transfer ban, leaving Griezmann feeling it would be unfair to depart when manager Diego Simeone would be unable to seek a replacement.

The Atleti man had supposedly been earmarked for a No.10 role at Old Trafford, but the collapse of his expected £86million transfer has led to a shift of focus for United, and Real Madrid centre-forward Álvaro Morata, who is also a Chelsea transfer target, is reportedly close to sealing a big-money move to the red side of Manchester.

Morata has all the hallmarks of a Mourinho striker and would be a stellar acquisition for United but former Inter Milan and Porto boss doesn't appear to be stopping there.

In a move that has come as a surprise to many fans, the Portuguese coach is said to want another out-and-out striker to complement Morata, with Torino's Andrea Belotti the man identified.

The Italian club are determined to hang on to their star man, and will likely demand his full £86million release clause is met if he is to leave. But if United are serious about landing the Italian international, such a fee would not be a problem for the world's richest club.

Belotti's arrival would, however, beg the question of how Mourinho intends to squeeze Il Gallo and Morata into his starting XI without upsetting the balance of the team.

Here are five ways United could line up next season with both Morata and Belotti in the side. 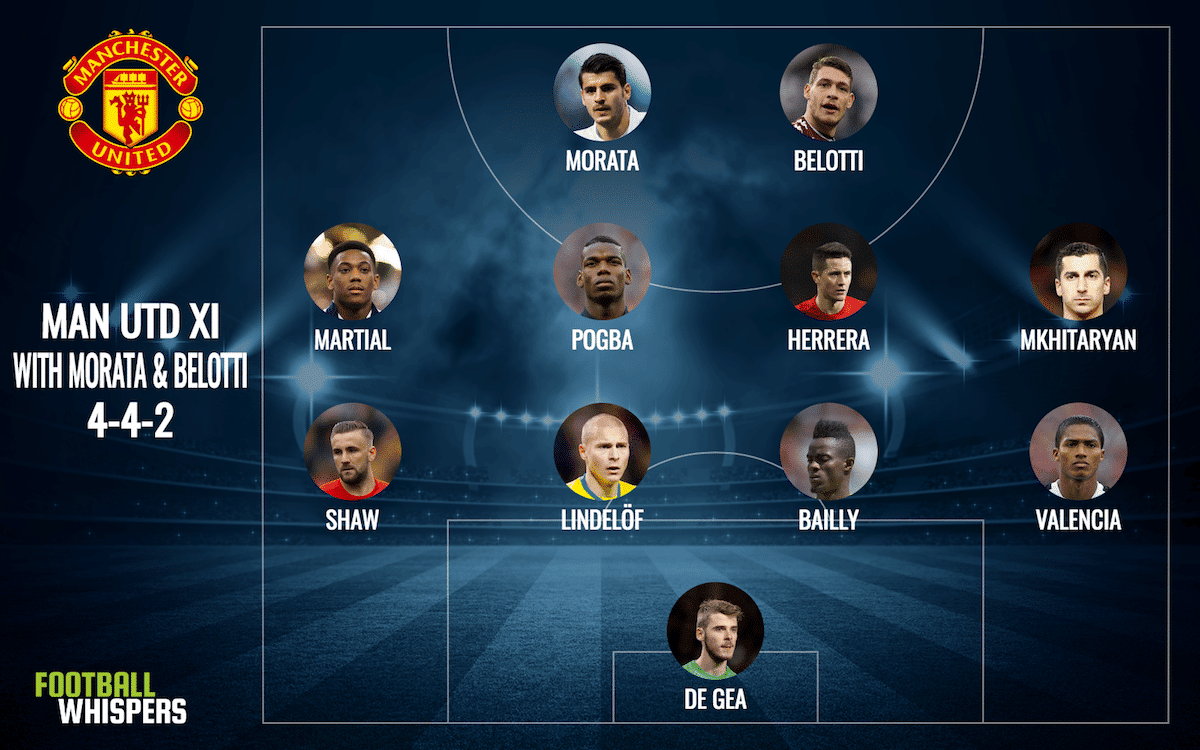 Perhaps the most obvious formation to accommodate Morata and Belotti would be 4-4-2. Mourinho has switched between 4-2-3-1 and 4-3-3 during his time in charge at Old Trafford and this would represent a relatively simple transition from the former.

If the No.10 pushes up alongside the central striker and the wingers drop a little deeper, 4-2-3-1 becomes 4-4-2. With Morata comfortable as a secondary striker and Belotti, who registered seven assists in addition to his 26 Series A goals last season, adept at linking play, there is reason to believe that this formation could work for United.

However, as is the case with several of the two-striker formation possibilities, 4-4-2 is not a great fit for record signing Paul Pogba.

As is the case when asked to play as one of the double pivot in 4-2-3-1, the Frenchman is shackled by too much defensive responsibility in a central midfield duo. His immense attacking gifts are much better suited to operating as part of a three.

United also lack the wide midfielders to really make 4-4-2 work, with Anthony Martial and Marcus Rashford, the two most regular incumbents on the left flank, converted strikers who lack the defensive understanding and positional discipling to play in this deeper role. 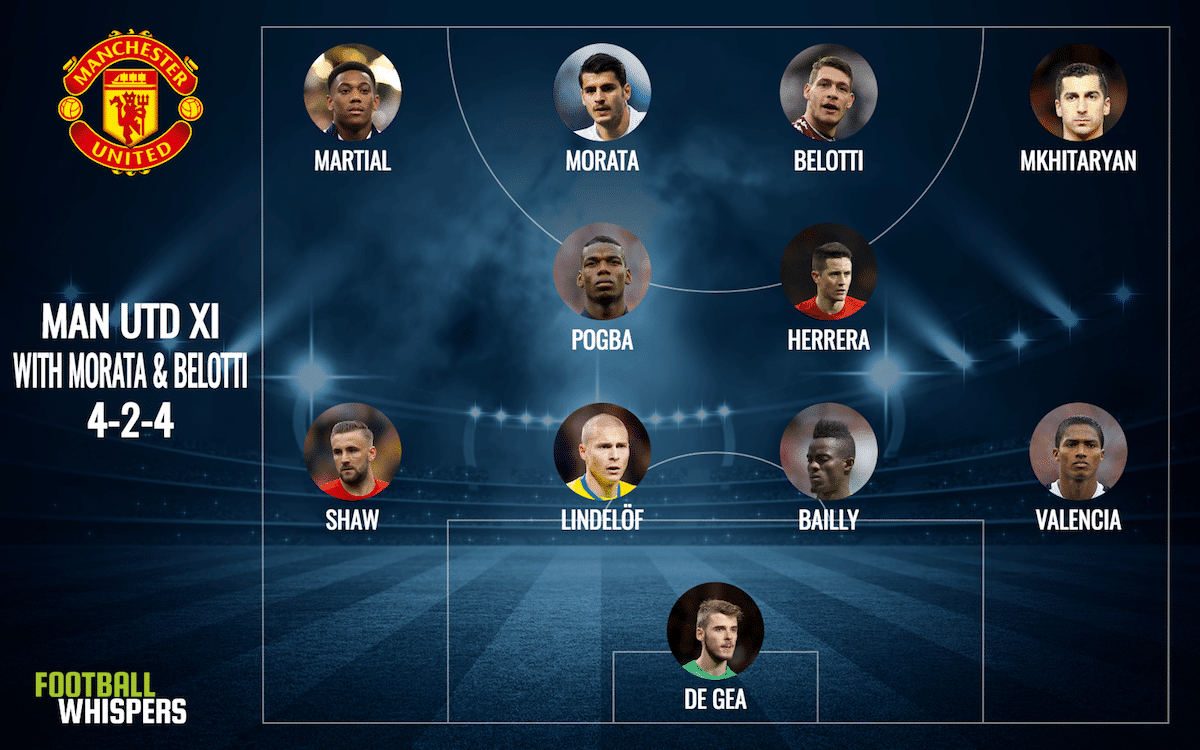 One alternative to 4-4-2 is the similar 4-2-4, a formation which Antonio Conte has used at Juventus and Chelsea at times, and one that Italian national team coach Gian Piero Ventura favours, meaning Belotti has experience in the system.

This doesn't solve the issue of Pogba being hampered by defensive tasks, and the expected acquisition of an athletic, defence-minded central midfielder will also be key to making it work — Fabinho of Monaco is reportedly a Manchester United transfer target.

But 4-2-4 would allow Anthony Martial to operate in the zones he prefers, while Henrikh Mkhitaryan as a more and malleable option on the right could cause serious problems for opponents with his scheming in such advanced areas. 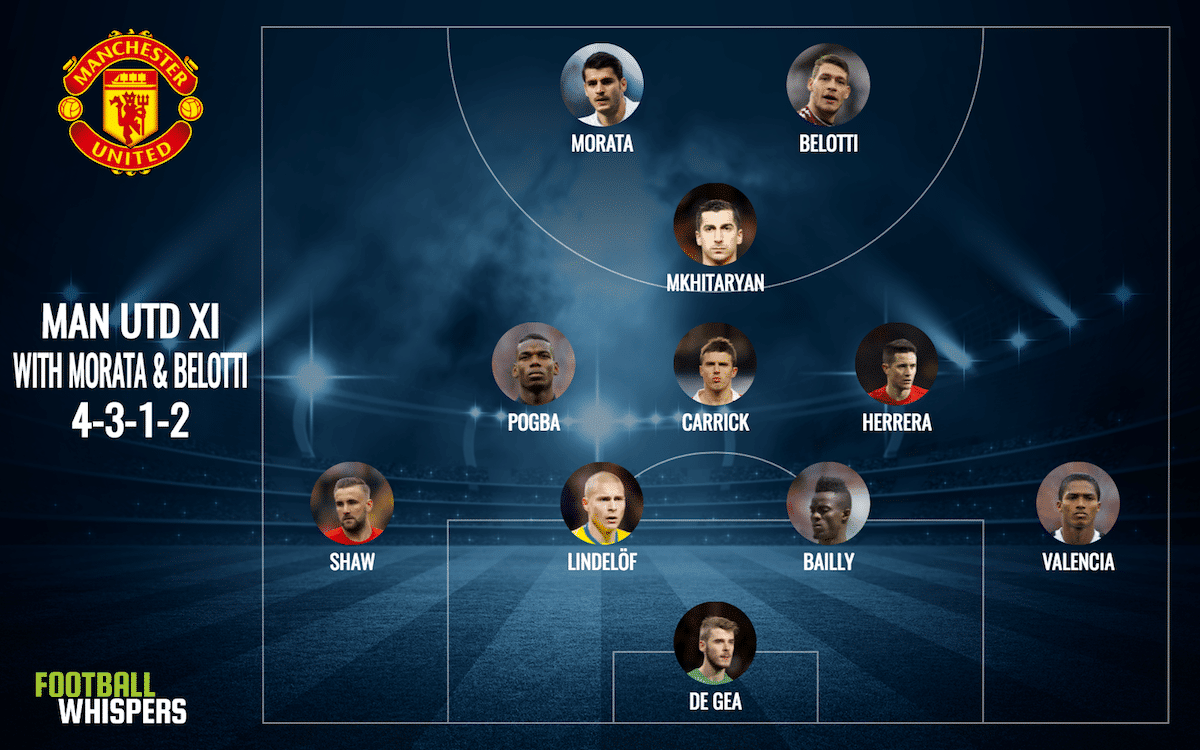 When Juventus reached the Champions League final in 2014/15, eventually losing  3-1 to Barcelona, manager Massimiliano Allegri utilised a 4-3-1-2 system. Both Pogba and Morata were part of that team, and both were well-suited to their respective roles within it.

Pogba would get to play in his favoured role on the left of a midfield three, and Morata would be the buzzing, energetic presence up front with Belotti acting as a fox-in-the-box-style poacher.

Mkhitaryan, too, would be well served by getting to play in his preferred No.10 position.

Although he usually lined up on the right for Borussia Dortmund under Thomas Tuchel, the German side's in-possession shape would often shift to something akin to 3-4-2-1, with the Armenian playmaker coming in from the flank to provide ammunition for Pierre-Emerick Aubameyang and Marco Reus ahead of him.

The caveat to this shape is that a lack of wingers would reduce Martial and Rashford to the role of back-up striker. But as both prefer to play up front and with plenty of games expected next season, they would see significant playing time by deputising to the first-choice pairing.

The absence of wide attackers means that the full-backs are required to be solely responsible for the side's width. This would be no problem on the right where the marauding Antonio Valencia has been reborn as an aggressive, attack-minded full-back.

Luke Shaw would also be perfectly suited to the role on the left but Mourinho seems to lack confidence in the young England international. Alternatives Matteo Darmian and Daley Blind lack the kind of athleticism to be successful in the position. 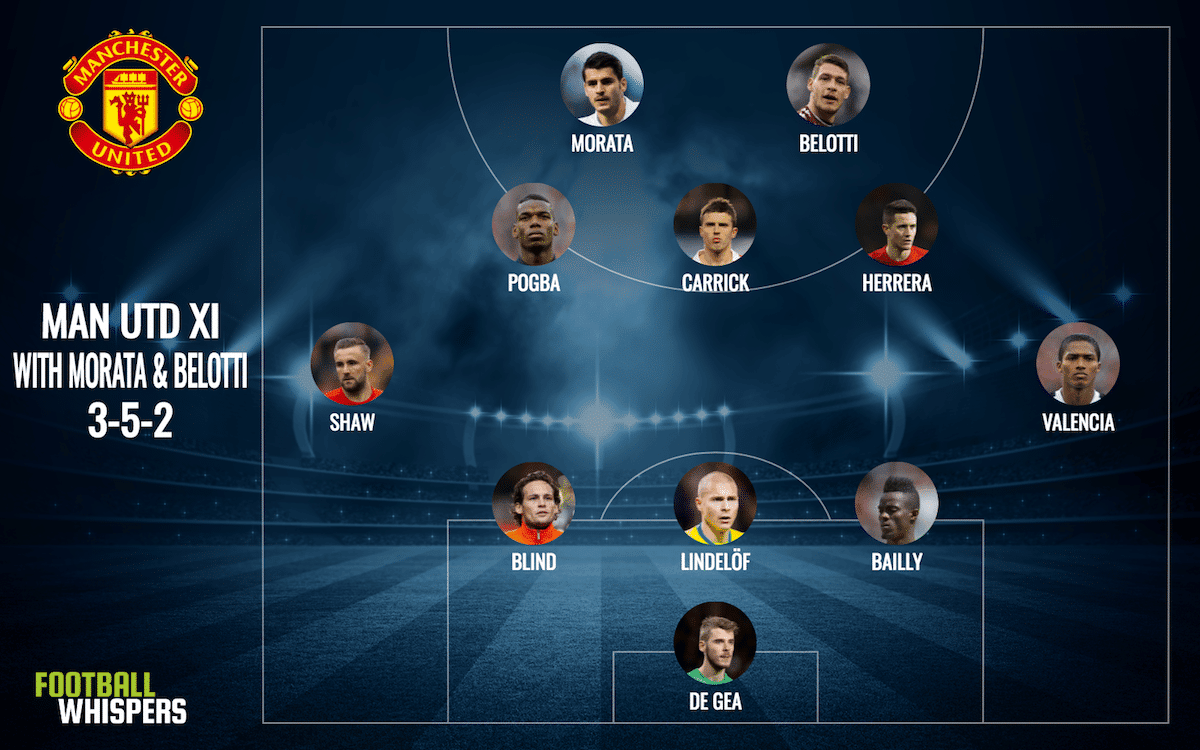 In a move that was completely against type, Mourinho jumped on the back three craze that swept through England last season, experimenting with 3-4-3 and 3-5-2 – although this was more a result of circumstances when an injury crisis struck the attacking positions.

However, United produced some fine performances with a defensive trio, giving reason for Mourinho to believe that revisiting the idea could be a sound option for next season.

As with 4-3-1-2, Morata and Pogba both excelled in a 3-5-2 formation at Juventus. The expected addition of Victor Lindelöf will also help make this shape work for United, as the Swedish centre-back is a gifted passer and could be hugely successful as a sweeper at the heart of the back three, just like David Luiz at Chelsea last term.

The presence of wing-backs would allow Valencia and Shaw to push forward without having to worry quite so much about abandoning their defensive stations due to the extra cover afforded by the outside centre-backs.

This would, however, leave no natural position for Mkhitaryan, while the Red Devils' reported pursuit of Inter Milan winger Ivan Perišić also suggests that 3-5-2 is not foremost in Mourinho's planning, as he too would have no obvious role to slot into. 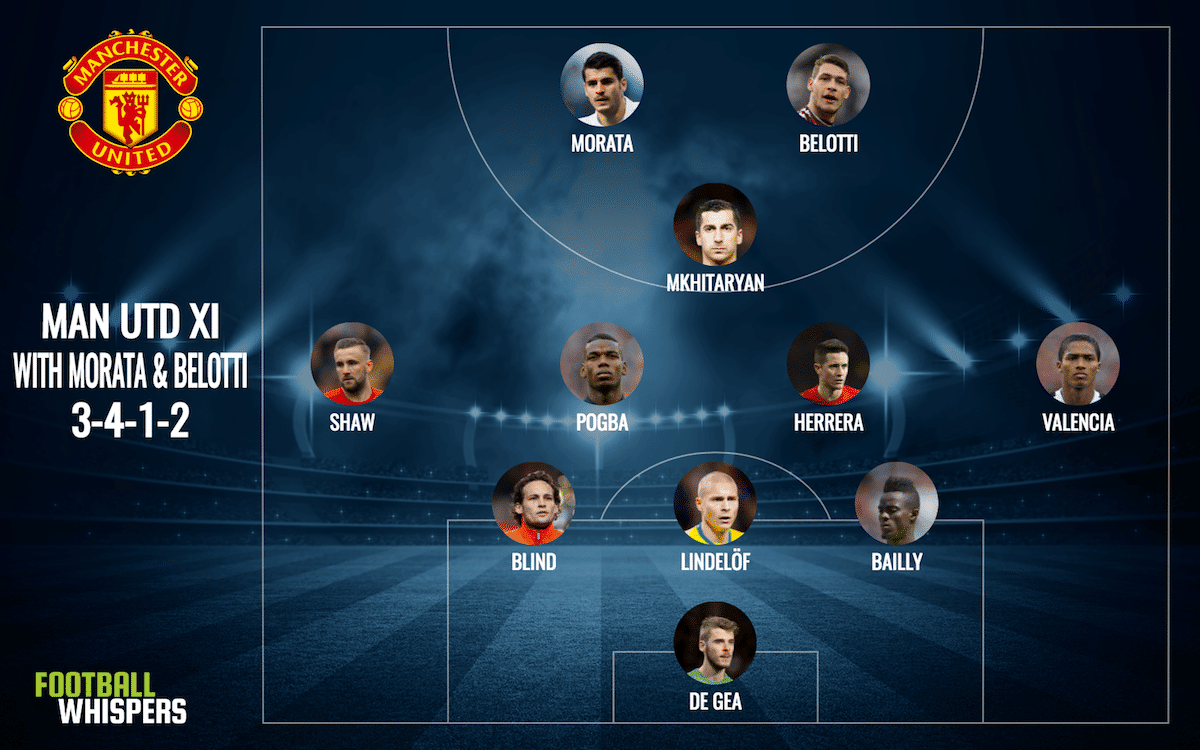 Using a 3-4-1-2 formation would be a great way of accommodating both centre-forwards and Mikhitaryan, while also ensuring there is no lack of width thanks to the presence of wing-backs.

As mentioned, this was a shape that Mkhitaryan was used to from his final season in the Bundesliga with Dortmund — the best campaign of his career to date.

It would, however, present the same problem encountered in 4-2-3-1, 4-4-2 and 4-2-4 for Pogba. Although it may not be his optimum position, the former Juve star has shown signs of developing into a capable performer in such a role as his tactical understanding continues to improve.

Some may argue that Pogba should be played as the No.10 in this or any other system which allows for such a role. But he was used as a central attacking midfielder during the first half of his final season in Italy and was far from convincing in the role.

However, having spent £89million on the 24-year-old, and given his status as comfortably the most gifted player in the whole United squad, Mourinho needs to do all in his power to get the best out of Pogba. And that means deploying him on the left of a midfield three.

United fans are understandably excited about the potential arrivals of Morata and Belotti but their enthusiasm should be tempered as the pair would present a serious tactical quandary for Mourinho.